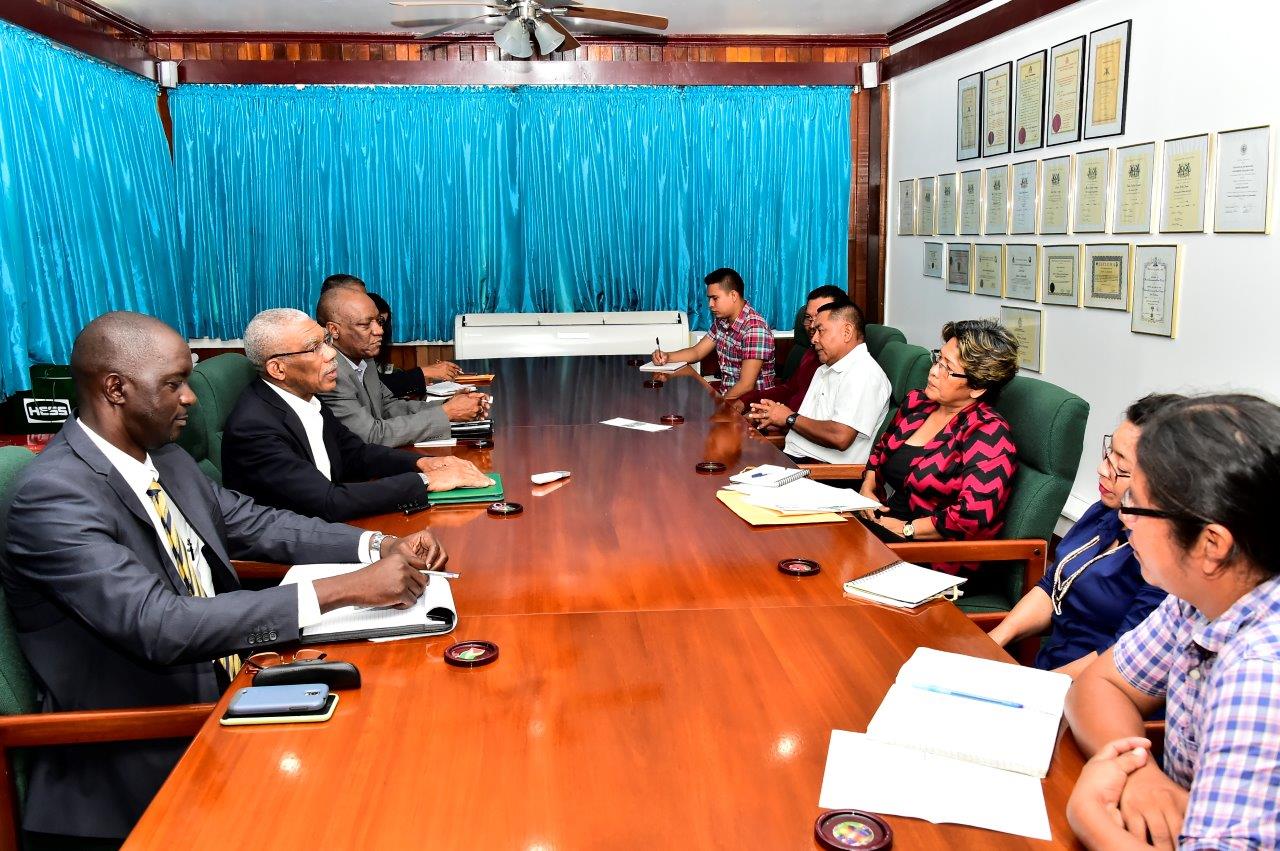 Georgetown, Guyana – (June 14, 2017) President David Granger has proposed a five-point intervention to ensure that the work of the Lands Commission of Inquiry meets the needs and address the concerns of all stakeholders. During a meeting with executive members of the Amerindian Peoples Association (APA) at State House, today, the Head of State made it clear that there was nothing sinister in the setting up of the Commission. The intention however, was to correct existing anomalies regarding individual and communal lands. “There is no mischief or no malice on my part or the part of the Government or the Commission to deprive people of their lands,” he said.

In addition to the plan, a special body will be established comprising of representatives of Indigenous peoples organisations including the National Toshaos Council (NTC) to ensure that the President’s interventions are properly executed so that the Commission’s work can move forward smoothly. So far, Commissioner of the Guyana Lands and Surveys Commission, Mr. Trevor Benn is the designated point of contact for the Government.

Following the setting up of the Commission in early March, several Indigenous groups and individuals have expressed dissatisfaction. President Granger said that the matter has now become highly politicised and, as such, he will be meeting with the various Indigenous Peoples’ organisations.

President David Granger flanked by Mr. Trevor Benn and Minister Joseph Harmon during their discussions with members of the Amerindian Peoples Association at State House

The five points that the President outlined are a comprehensive review of all literature that has to do with Amerindian land titling, particularly as it relates to ongoing programmes; consensus building on the Terms of Reference; strengthened adherence to the principle of Free Prior and Informed Consent (FPIC) so that communities are fully involved in the process; the reconciling of the positions of the Government, the Commission and that of Indigenous Peoples’ organisations; a review of the Amerindian Act of 2006 and halting the work of the Commission on matters specifically related to Amerindian lands until all the outstanding concerns are addressed.

Importantly, Minister of State, Mr. Joseph Harmon, who was also present at the meeting, informed that aspects of the Commission’s work related to lands other than those belonging to Indigenous peoples will proceed as scheduled. “The inquiry will continue where that is concerned but in so far as it has to do with Indigenous peoples’ land, the Commission’s work would be put on hold, pending the outcome of what is going to happen with the body that will be set up,” he said.

With regard to the Amerindian Act, Minister of State, Mr. Joseph Harmon explained that law revision is a very lengthy process and as such it would not be possible to conclude this matter within the life span of the Commission. In light of this, he said that only the “injurious elements” of the Act will be addressed for the purpose of fulfilling the mandate of the Commission. A more holistic review of the law will follow later.

“The meeting was very positive. His Excellency, I believe, quite skillfully represented the country because land issues are not just [confined to] one part of the country, but the entire [country]… What he was able to do is to situate what is happening in the Commission within the larger context of the ‘green’ state development agenda that we are looking at and the fact that we want to provide a good quality of life for all Guyanese irrespective of where they live,” Minister Harmon said.

Executive Director of the APA, Ms. Jean La Rose said that “this is a good step in the sense that we are able to discuss these issues, we are able to air our concerns and focus on how we can move forward… Hopefully, at the end of these discussions we will arrive at a common position.”