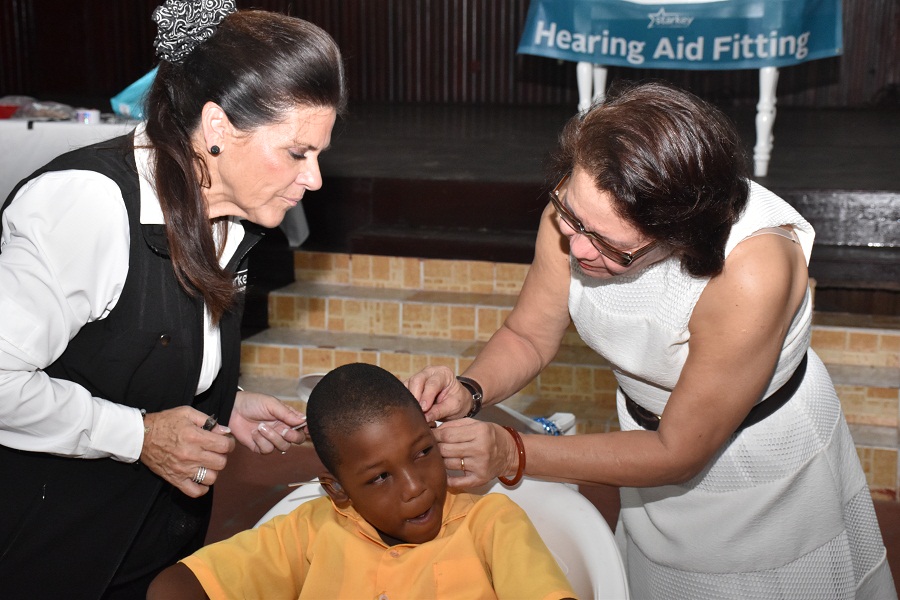 Georgetown, Guyana – (June 13, 2017) Over 560 persons with hearing impairment today received hearing aids as the Starkey Hearing Foundation rolled out the second phase of its Guyana hearing mission initiative for 2017. First Lady Mrs. Sandra Granger who was present at the outreach held at the National Exhibition Centre in Sophia, expressed appreciation for the services provided by the Foundation, which has expressed an interest in establishing a base in Guyana, from which they will do outreaches to other parts of the Caribbean.

The First Lady also commended the Foundation’s counselling services, which is a vital part of its mission and which provides basic hearing healthcare services to the stakeholders.

“I think they’ve also done a good job of explaining to people the importance of caring your hearing, so to speak, and I am very happy to work alongside with them…. The beauty of this is that there is a record of all the patients, high tech [and] barcoded, which the Ministry [of Public Health] keeps, but it also shares with Starkey so they have a complete database on all the people they have treated so if anything goes wrong with the hearing aid… once they scan that barcode they know who is the person they are dealing with so it’s pretty comprehensive and dedicated work for Guyana,” she said.

Mr. William F. Austin, the founder of the Starkey Hearing Foundation, his wife Ms. Tani Austin and other members of the Starkey team partnered with representatives from the Audiology Department of the Ministry of Public Health to outfit the first 154 persons, who had previously been tested for hearing impairments during the first phase of the exercise, which was held in March. The remaining 406 patients will also be tested and outfitted with custom hearing devices.

First Lady, Mrs. Sandra Granger helps Ms. Tani Austin to fit this little boy with his hearing aid, during the second phase of the Starkey hearing mission in Guyana.

Several of the recipients expressed their gratitude to the government for providing the hearing aids free of cost. Mr. Darren Taitt, a porter of the Georgetown Public Hospital said that he is particularly grateful for his hearing device as he suffers from a birth defect that affects his ability to hear.

“I feel better. Everything [is] good … sometimes when people talked … I [didn’t] hear properly, but I feel happy. At work, when my boss [talked] I would forget, I can’t remember everything because I didn’t hear properly … but now talk one time and I hear better,” he said.

Mr. Simon Jones of Corriverton, Berbice, said he travelled all the way to the city to be outfitted with his hearing aid. “I feel really good because a lot of us are going through this same problem, don’t hear too good and it’s a great gesture that the First Lady can bring this project to Guyana to help out those who are in need of proper hearing so that our lives can go back to normal. The hearing aid has done tremendously for my life because it has [brought] me back into reality. I can hear both sides now, right and left … so I am very happy,” he said. 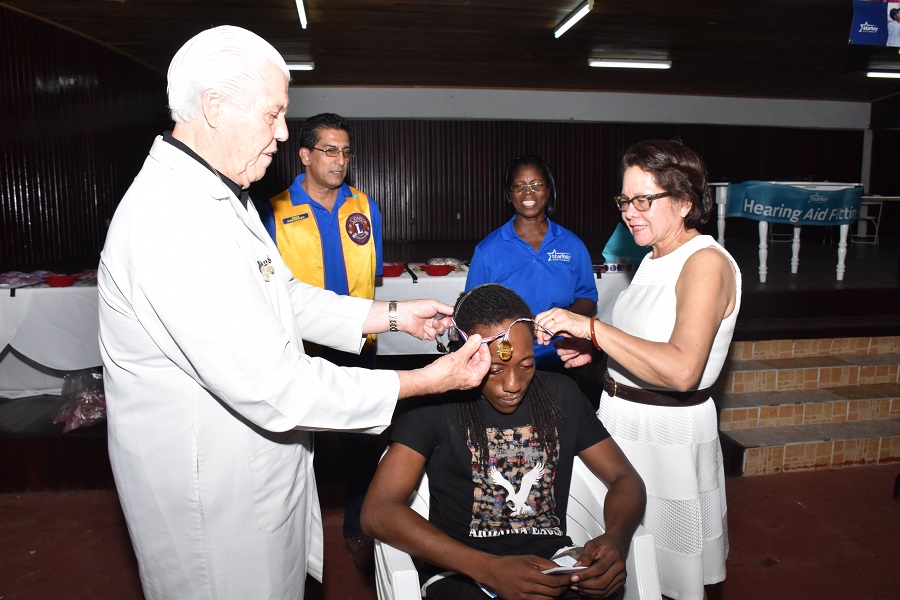 First Lady, Mrs. Sandra Granger assists Mr. William F. Austin, founder of Starkey Hearing Foundation, to place this token around the neck of recipient Mr. Darren Taitt after he was outfitted with his hearing device. ​

Mr. Sebastian Ramsuchit expressed similar sentiments. “Today I have come to collect my hearing aid and I am so grateful to the Starkey… and the Government of Guyana, the Ministry of Health; they are doing a wonderful job. It’s years now that I haven’t been hearing properly and [I] get this hearing aid now I’m hearing well … With this hearing aid it help me to focus better on my job because I could hear what people want, I could answer them, I could talk,” he said.