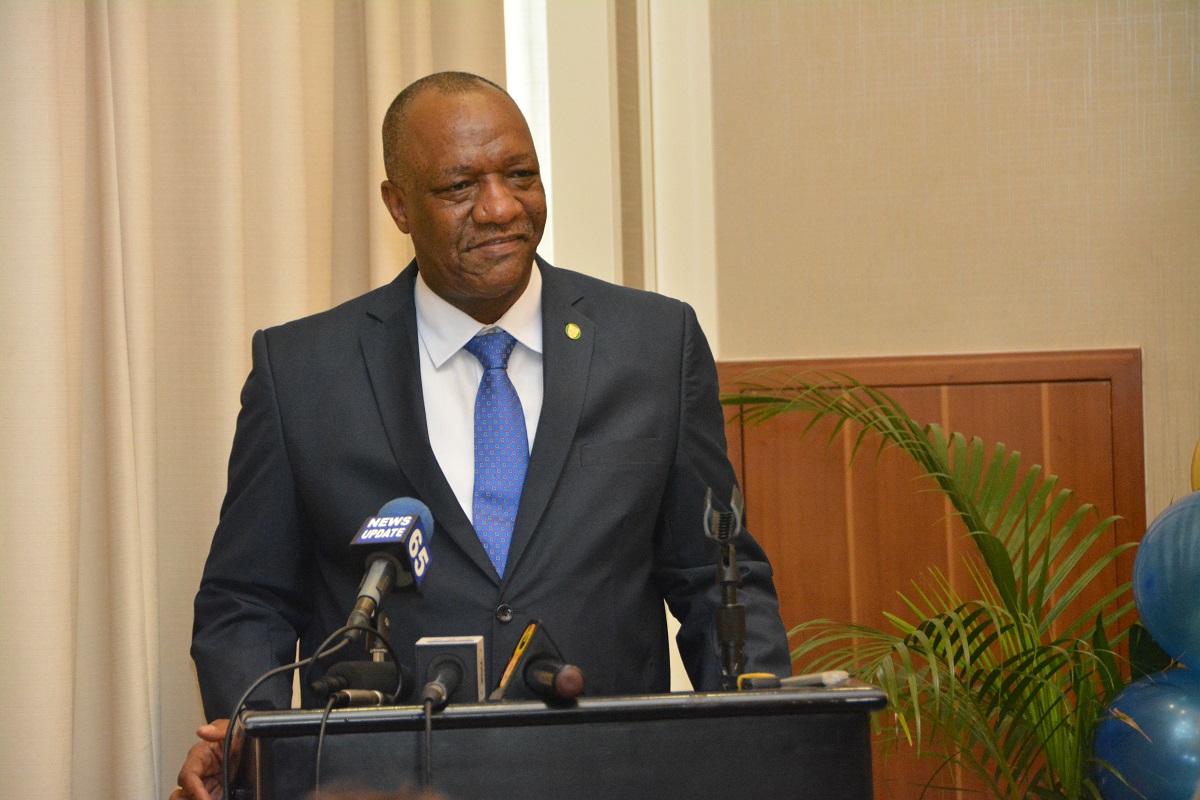 Georgetown, Guyana – (June 8, 2017) Minister of State, Mr. Joseph Harmon, today, said that the Government is committed to working with all sectors of society, including the Private Sector Commission (PSC) for the overall good of the country even as it is assiduously working to address the “illusionary” economy, which it inherited when it came into office in 2015. The Minister also used the opportunity to recommend sustainable investment opportunities to the PSC, in which support is readily available as the country forges ahead with its ‘green’ agenda.

The Minister of State, who was at the time delivering the feature address at the Annual General Meeting (AGM) of the PSC, which is also celebrating 25 years this year since its establishment, said that the David Granger administration has recognised and acknowledged the importance of the PSC and its role as a corporate citizen. It is in the interest of all of Guyana, he said, for the Government to work with all sectors and stakeholders.

“I wish to debunk the perception or suggestion that the Government views the PSC with hostility. It is a matter of record that Government Ministers have always agreed to meet with the officials of the Private Sector. The PSC has institutionalised regular meetings with the Ministers of Finance, Business, Foreign Affairs, Public Infrastructure and the Ministry of Natural Resources. The role of Government is as a facilitator of business and [it] is tasked with providing an enabling environment with strong institutions free from interference, a highly educated workforce and infrastructural development that will provide access to resources. We have no illusions to the role of the Government and we are working towards providing that environment where the Private sector can play their role,” Minister Harmon said.

Noting that the AGM is taking place at a time when the administration is approaching the mid-term of its office, Minister Harmon said that over the last two and half years the government has worked diligently to create that enabling environment for investors.

“However, we have had to confront many inherited problems such as the inheritance of an illusionary economy that hindered the development of Guyana’s productive sector and sidelined legitimate businesses; the lack of focus on value-added production and the limited ability to effectively allocate resources and effect public expenditure because of [the] limited capacity of our human capital and this is not just about private sector,but the Government as well,” he said.

The Minister of State also said that the Government is working to ensure that the economy is not only legitimised, but is also brought into conformity with international financial probity and expectations to establish transparency and accountability, to establish proper systems and insist on due process. This is not just the responsibility of the Government, he pointed out, but rather a concerted approach is needed by all stakeholders including the private sector.

“I wish to submit that these processes were and are necessary if we want to place Guyana on true and sustainable development. What is now needed is for us, the Government, and the PSC, as well as stakeholders, to increase our efforts to create that enabling environment at which we can speak with each other… We have to create that environment in which investors see that we are serious about developing Guyana and that that is the environment in which they want to come,” he said.

As the administration continues to pursue a ‘green’ economy to combat the effects of climate change and to build the country’s resilience, the Minister said told the private sector representatives that new opportunities are already unfolding, which they should begin to explore and capitalise on. The Minister noted that the Government has already begun creating these opportunities in its 2017 National Budget, but it is the individuals who must now take advantage as the ‘green’ economy will create new sectors, new jobs and new demands.

“The objective is to reorient and re-diversify Guyana’s economy from traditional sectors and opening up sustainable income and investment opportunities in high growth sectors. This will provide a platform from which Guyana can start the transition into a diversified and inclusive economy and embrace sustainable development. We will become a leader and the leading example of a ‘green’ state and serve as an inspiration to other countries in the region and worldwide. The achievement of the green economy will not happen with different actors working with different timings on different scales. It will require action across all sectors and especially the public and private sector. Opportunities abound for investors in the pursuit of the green economy,” he said.

In pursuit of this agenda, the administration has developed the Green State Development Strategy. This strategy will be based on the sustainable use of the biodiversity and a decarbonised approach that endeavours to provide a better quality of life for all Guyanese within the ecological limits of the country’s natural resources, the Minister said. He further noted that this will guide Guyana’s economic and social development over the next 15 years. It will be the Government’s foundation for ‘green’ economic and social growth and will provide the blueprint to achieving sustainable development and related targets and outlines a long-term vision for a prosperous and equitable future, he added.

Minister Harmon noted that it is the administration’s will to work with all Guyanese for the country’s good but ultimately, it must be a concerted effort. “I would hope that once we put Guyana first, we would put some of our personal prejudices on the back-burner so that we can move this country forward. If we work together for the rise of the tide of goodwill for all of Guyana, we will be a better place and the good life will not just beckon but will become a reality,” he said.

Meanwhile, Chairman of the Private Sector Commission (PSC), Mr. Eddie Boyer said that the PSC and the Government have been able to work together to address some critical issues and it is hoped that this can continue in the near future. He urged all stakeholders to put aside differences and to work for the development of the country.

“A strong PSC is necessary for the development of Guyana and no Government has ever been successful without a vibrant Private Sector. I would like to ask the Opposition and Government to unite in the interest of allowing the country to bring on board fresh ideas instead of bickering. Political divisions serves no purpose; let the development of the country be held high regardless of who holds power,” he said.

Business magnate and former Chair of the PSC, Mr. Yesu Persaud echoed similar sentiments. He noted that every individual’s motivation should be to make their country a better place and every other difference should be cast aside.