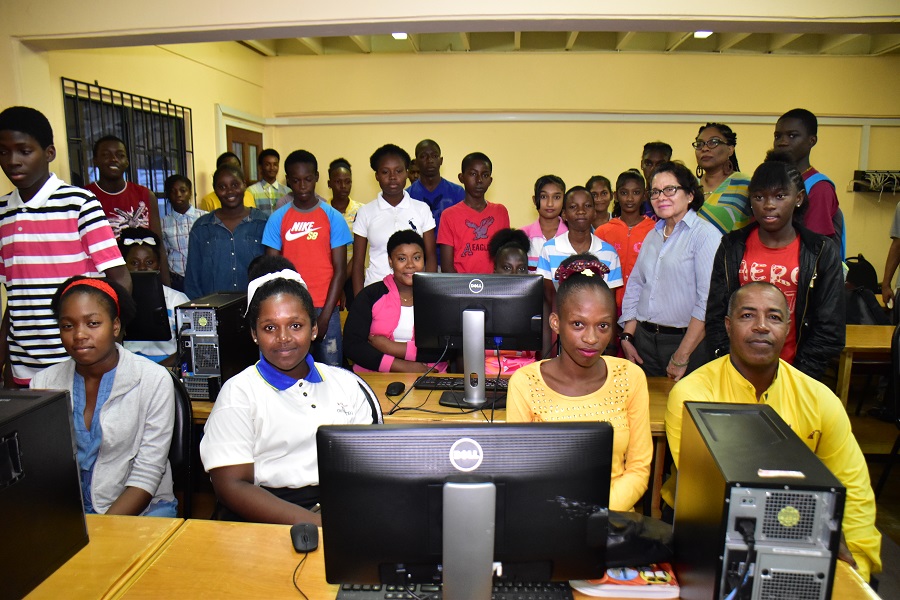 Georgetown, Guyana – (May 31, 2017) Minister of State, Mr. Joseph Harmon, this morning, said that even as climate change is addressed at the national level as a part of Guyana’s ‘green’ development policy position, communities must also be equipped with the necessary tools, training and knowledge since this is where the effects are most felt.

The Minister was at the time delivering the feature address at the opening ceremony of the United Nations Environment (UN Environment) Regional Capacity Building Workshop on Supporting Countries to advance their National Adaptation Plan (NAP), which was held at the Ramada Princess Hotel.

Minister Harmon, while delivering an address to Permanent Secretaries from the various Ministries and representatives from Climate Change focused-agencies across the Caribbean said, “We must ensure that we integrate climate risks and adaptation measures not only in development plans for our economic sectors, but also facilitate decentralisation from national to our regional and community level plans, for resilient communities and infrastructure.”

The Minister of State said that Guyana is considered particularly vulnerable to climate change. He noted that six of the country’s ten administrative regions are within the low coastal plain, which in some areas is more than one metre below mean high tide levels. Further, he noted that a significant percentage of housing settlements, infrastructure and much of the main economic activity, including the agricultural sector, are found on the coast.

“Due to our inherent characteristics, Guyana is regularly affected by flooding caused by heavy rainfall or overflowing riverbanks, drought on an annual basis, heavily influenced by the El Niño Southern Oscillation, and salt water intrusion for great distances in our rivers, such as the Mahaica River and the Pomeroon, influenced by tidal differences during the dry season. While most may only consider the flood risk of the coast, our hinterland region is also exposed, with the most recent flood occurring just over a week ago in Region Eight, affecting six villages and over three thousand individuals. These natural hazards are expected to increase, due to projected temperatures increase and sea level rise together with higher storm surges, based on outputs of climate models,” Minister Harmon stated.

The Government of Guyana, Minister Harmon said, recognises the importance of reducing the country’s risks and increasing its resilience to climate change. To demonstrate its commitment to increasing its resilience, Minister Harmon outlined the various actions, which have been by the Government, thus far for the integration of climate risk into national development planning, policies and programmes.

“Guyana has elaborated in its Nationally Determined Contributions to the Paris Agreement, unconditional contributions for adaptation and is undertaking the following initiatives: Mainstreaming Disaster Risk Management/Disaster Risk Reduction in the Agricultural Sector, Sea and River Defence Resilience Project, Sustainable Agriculture Development Programme, which will support strategic actions for shifting of agricultural production from the coast to the hinterland as an adaptation strategy to climate change, Improved drainage and irrigation for coastal communities and water resources management and water harvesting for hinterland communities by the Ministry of Agriculture,” he said. 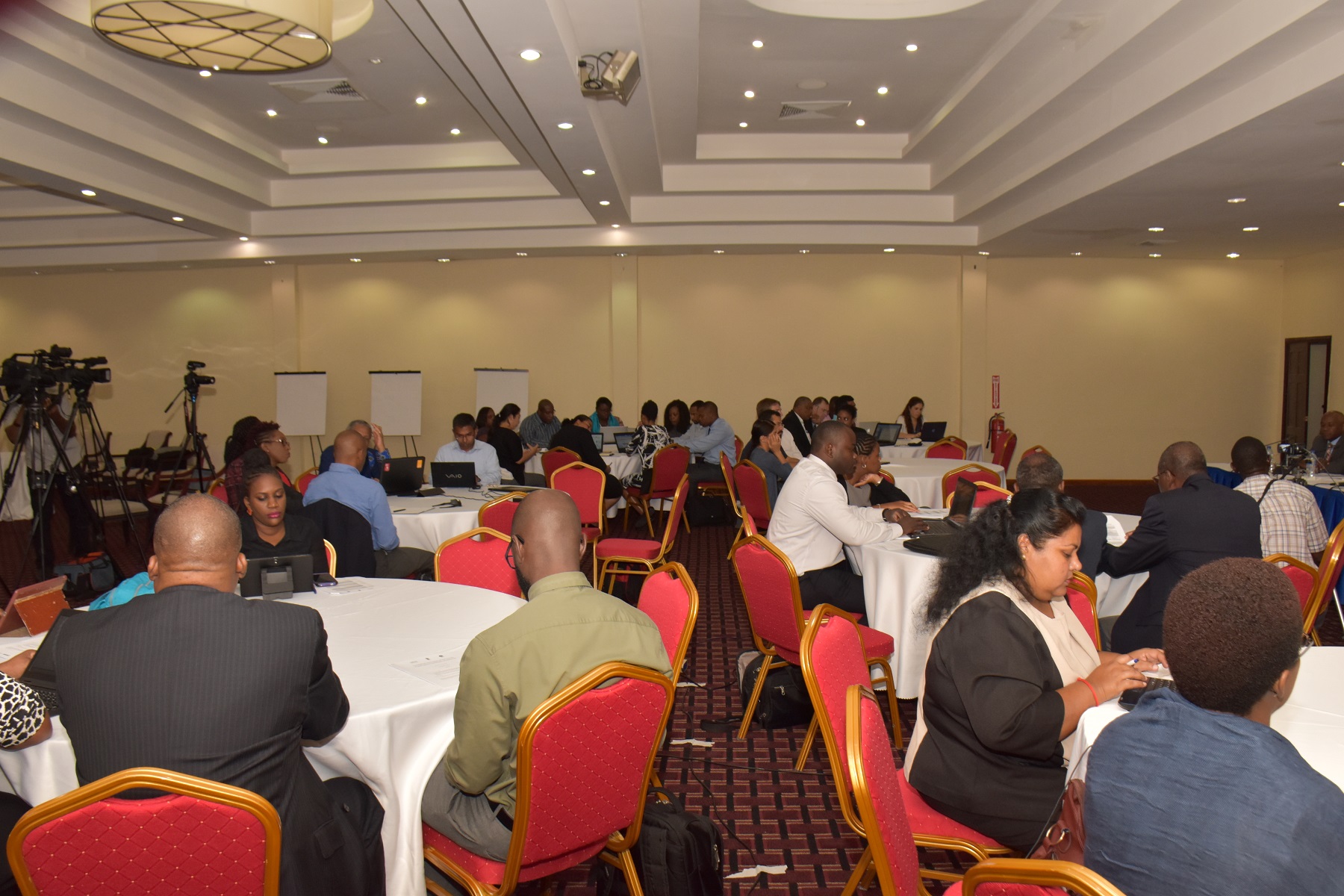 Some of the participants of the United Nation’s Environment (UN Environment) Regional Capacity Building Workshop on Supporting Countries to advance their National Adaptation Plan (NAP), which is being held at the Ramada Princess Hotel.

The Minister also said that Permanent Secretaries were selected for this training because they are the chief planning officers at the Government Ministries and, therefore, must be equipped with the knowledge and training to include climate change resilience and mitigation strategies into their plans and projects.

In this context too, Minister Harmon said that Guyana’s vision for a ‘green’ economy, which is also geared at combating the effects of the climate change and global warming phenomenon is a great boost to the global fight. “This will be further supported, with technical assistance through Green Climate Fund NAP readiness support, for better integrated planning on the coast and capacity building to develop a coastal community resilience plan, also with the support of UN Environment,” he said.

The workshop, he said, is timely as it will offer an opportunity for knowledge exchange and capacity building, through sharing of experiences and lessons learnt on implementation of NAP process within the respective countries, recognising that each is at a different stage of implementation.

Meanwhile, Head of Caribbean Sub Regional Office of the United Nations Environment Programme, Mr. Vincent Sweeney, in his remarks, said that the workshop is part of the joint UNDP-UN Environment global project to support national adaptation plans. He noted that the initiative started in 2013 with a first phase to support the development of national adaptation plans in least developed countries.

“The objective here is to strengthen capacities for the elaboration of these plans, and in this sense, this initiative has the support and experience of the Regional Gateway for Technology Transfer and Climate Change Action in Latin America and the Caribbean (known as REGATTA). REGATTA’s main objective, as the name suggests, is to strengthen capacities, and promote and exchange knowledge on climate change technologies and experiences in the areas of mitigation and adaptation for the Latin American and Caribbean region,” he said.

According to Mr. Sweeney, one of the lessons learnt from this initiative is that while, only a few years ago, capacity building required sharing basic information on what was climate change, whether it was actually occurring and why adaptation plans are necessary; now, it requires more focused knowledge on specific aspects, and above all it is paramount to know experiences and learn from what has and has not worked in other places.

Speaking to some of the challenges, Mr. Sweeney said that while much progress has been made in policy-making and the development of climate change institutions in all countries in the region, the integration and coordination of climate policies with other sectoral policies remains a challenge because of the operational difficulties involved, and also because sectoral policy and climate change have often conflicting or poorly aligned objectives, for instance, forest protection policy versus agricultural production policy). The forum therefore, he said, will provide insights and knowledge, which can help the various countries to evaluate themselves and examine where they need to be.

Meanwhile, Ms. Shabnam Mallick, Deputy Resident Representative, UNDP Guyana, in her remarks, said the workshop is a demonstration of the UNDP’s commitment to providing support to developing countries in their quest to adapt to climate change.

“We are glad to see that the workshop will emphasise on sectoral, economic and other dimensions on the process. Importantly, this meeting will serve to discuss financial and technical opportunities towards the implementation of NAPS in the Caribbean,” she said.