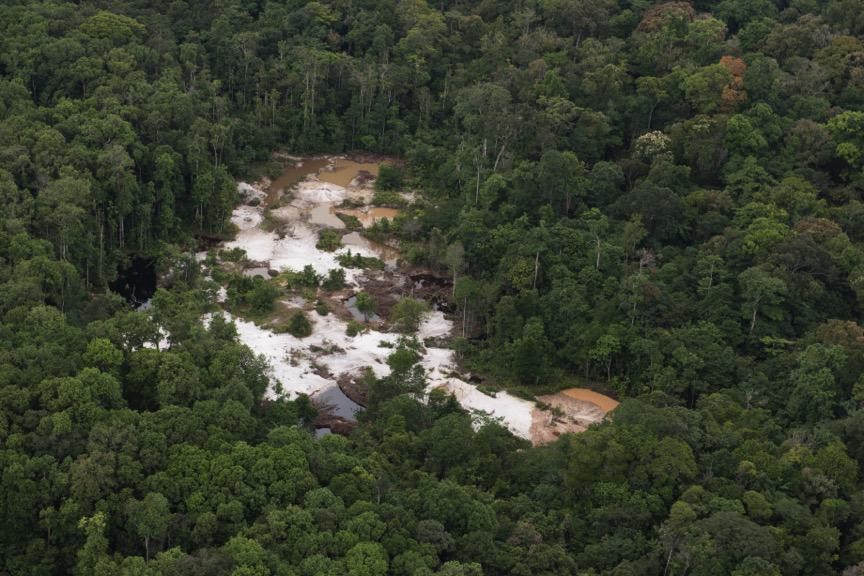 Georgetown, Guyana – (May 29, 2017) In an effort to clamp down on mining in Protected Areas, the Government of Guyana has launched a joint services operation in the Kaieteur National Park (KNP), where the Protected Areas Commission (PAC) and the Guyana Defence Force (GDF) had discovered, through aerial reconnaissance, 20 illegal mining camps.

On Sunday, an operation by members of the joint services as well as personnel from the Guyana Geology and Mines Commission (GGMC) was launched, following an initial discovery of four active mines, one mine where activity was uncertain, and eight active camps inside the KNP by the PAC on February 16, 2017. Of the five mines, three had already been issued cease orders by the GGMC in 2014 with reinforcement actions as recent as 2016. Despite this and two site visits by the GGMC, following the issuance of the cease orders, at least two of the three mines still remained active.

A further reconnaissance by the GDF on May 5, 2017, less than three weeks ago, revealed that there were, at that time, 20 camps. At one site, there was evidence of water pollution and freshly exposed sand tailings according to a report from the PAC. Commissioner of the PAC, Ms. Denise Fraser, in an invited comment, said illegal mining in the area has been taking place for a number of years despite repeated warnings. Predating the above mentioned cease orders there had been efforts in 2013 to end mining activity in the Park.

“What we have found is that in some areas where miners have been previously moved, they have gone back. So there is a need for strong actions so that a message can be sent. In 2013, five cease orders were issued by the GGMC to mining operators of mines within the Waratuk area, north-eastern boundary of the Park boundary. There were two site visits conducted by PAC and GGMC in August 10, 2014 where three mines and four camps were observed within the extreme north and north-eastern boundary of the park. This led to the issuance of three cease orders by the GGMC. In March, 2016, two flyovers were conducted by PAC and GGMC, which indicated that the mining had continued to persist within the Park boundaries. This led to the GGMC enforcement, which resulted in the seizure of 11 engines, eight dredges and an excavator,” Ms. Fraser said.

As a result of the raid on Sunday by the members of the joint services, five camps were searched and the persons present detained. It is reported that the dredge owners were not present during the time of the raid. Twenty-one persons have been detained by the Guyana Police Force (GPF) for illegal mining in the KNP. However, Ms. Fraser said that the PAC has been in contact with the Ministry of Natural Resources as well as the Ministry of Indigenous Peoples’ Affairs to ensure that the detainees have access to food and are taken care of while in custody. She noted that once released, the PAC will work with the Ministry of Indigenous Peoples’ Affairs to provide accommodation, where necessary.

Minister of Natural Resources, Mr. Raphael Trotman, in an invited comment, said that the KNP is a national protected area and it is incumbent on the Government to send a strong message to those who are bent on breaking the law. The Minister noted that only last year six operators were removed from the area.

“Last year, we sent a team in and it was during that exercise that we even lost a member of the Guyana Police Force after the boat he was travelling capsized and yet we have persons returning to the Park and mining. The Government must, therefore, send a strong message to the individuals because it is a national protected area and part of our national patrimony,” Minister Trotman said. 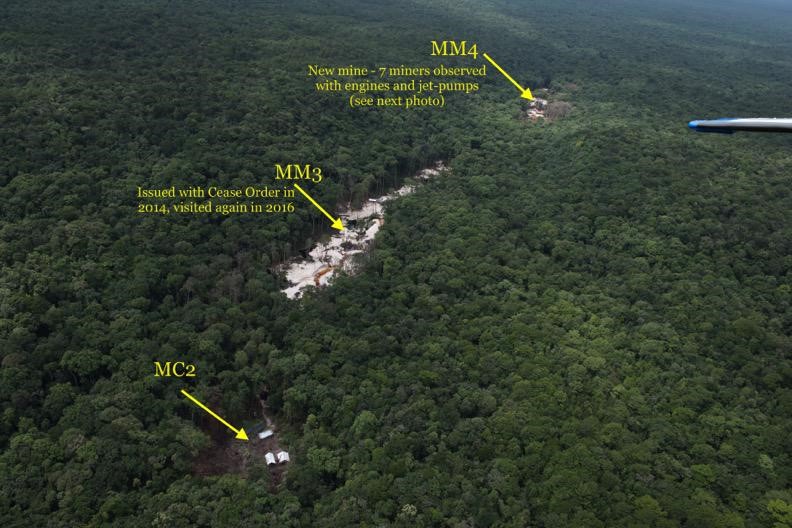 Director of the Department of Environment, Ms. Ndibi Schwiers, in an invited comment, said that the KNP is Guyana’s oldest protected area, famed for the world-renowned Kaieteur Falls and its rich biodiversity. As Guyana continues to push ahead with the development of a ‘green’ economy and protection of its flora and fauna, Ms. Schwiers said that illegal mining can have debilitating effects on the economic and social well-being of the country as it is way more destructive on the environment than permitted mining as these unregulated miners are more ruthless in their operations.

“There is indiscriminate cutting of trees, which results in the loss of habitat and habitat fragmentation for the wildlife that inhabit the area. Specifically, birds and other wildlife that depend on the trees for their food, shelter and other forms of survival perish. Illegal mining in the Kaieteur National Park also presents a plethora of problems for downstream communities that depend on the water for drinking and other purposes through pollution of the water and unregulated use of chemicals to extract minerals,” she said.

Section Four of the Kaieteur National Park Act states, “It shall not be lawful for any person to enter into, travel or encamp within the park or to build any structure therein, or to hunt, chase, catch, shoot at, kill or otherwise disturb any animal or cut, pluck or gather any of the flora or interfere with or disturb he soil by mining or other operations within the park or to remove anything whatsoever from the park except in accordance with regulations made under this act. (2) Any person acting in contravention of any of the provisions of subsection (1) shall be liable on summary conviction to a fine of ninety-seven thousand five hundred dollars, and anything taken by such person from the park shall be forfeited.”

Further, according to the regulations made under the Mining Act 2005, Part XXVII Section 251 (1) (a), “No person shall conduct mining and quarrying activities in the following areas- (b) In specified nature reserves and parks where resource extraction is prohibited; (c) In buffer areas without express approval of the Commission and the notification of parties likely to be affected by the activity.”

Additionally, Section 122 of the Protected Areas Act 2011 states that “Any person, except persons under the Amerindian Act, who mines, quarries, drills or removes any minerals, stone, gravel, earth, sand, or other substances or prospects for such substance in a national protected area commits an offence under paragraph (a) of the Fourth Schedule.”