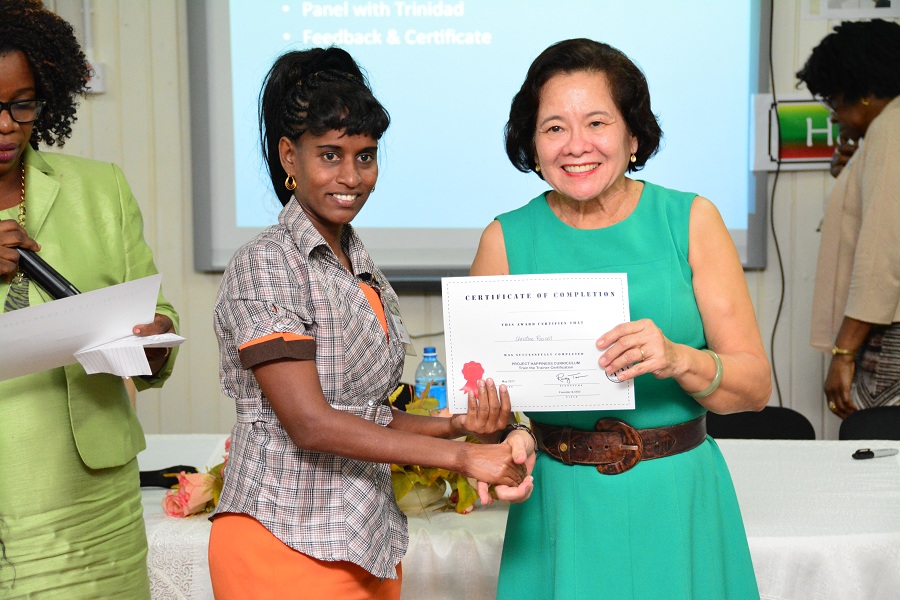 Georgetown, Guyana – (May 30, 2017) First Lady, Mrs. Sandra Granger, today, called on educators, welfare officers and other stakeholders to be standard bearers and positive influences on the children in their care, many of whom face difficult situations daily. She made these remarks at the closing ceremony of the second ReThink – Project Happiness ‘Train the Trainer’ Workshop, which was held at the Ministry of Education’s National Centre for Education Resource Development (NCERD) in Kingston. The workshop is aimed at providing participants with the tools needed to boost children’s self-esteem and promote their emotional development.

“You are educators, you are the ones who are leading our children out and I know that the lessons and the experiences you have had over these two days will have had an impact on you and would, hopefully, have an impact on the children with whom you come into contact… The influence of a good teacher never goes away,” Mrs. Granger said.

The First Lady expressed the hope that a similar project could be implemented across Guyana, particularly in the wake of the recent spate of violent acts that have been perpetrated in the society. “Let us respect, let us love and let us show everybody else we can disagree, but we do not have to abuse each other physically, verbally or mentally to get our points across, that we can live in harmony with different views,” she said.

First Lady, Mrs. Sandra Granger presents a participant with her Certificate of Completion at closing ceremony of the second Rethink- Project Happiness Train the Trainer Workshop.

Over the course of the two-day workshop, stakeholders were taught lessons that were designed to improve children’s focus, emotional resilience and their ability to make better life decisions. The workshop included presentations from the trainers, Ms. Brook Dorff, Director of Operations and Development and Ms. Randy Taran, Founder/Chief Executive Officer of Project Happiness and included interactive sessions where participants were allowed to practise skills such as empathy and appreciation.

Several of the participants said that they found the workshop to be very beneficial and that they plan to share the knowledge that they have gained with their peers when they return to their respective schools.

Assistant Head Mistress at the Rose Hall Town Primary School, East Berbice-Corentyne (Region Six), Ms. Karen Marks said, “As teachers, go back to the schools and teach the others so that the information we acquired it could pass on”. 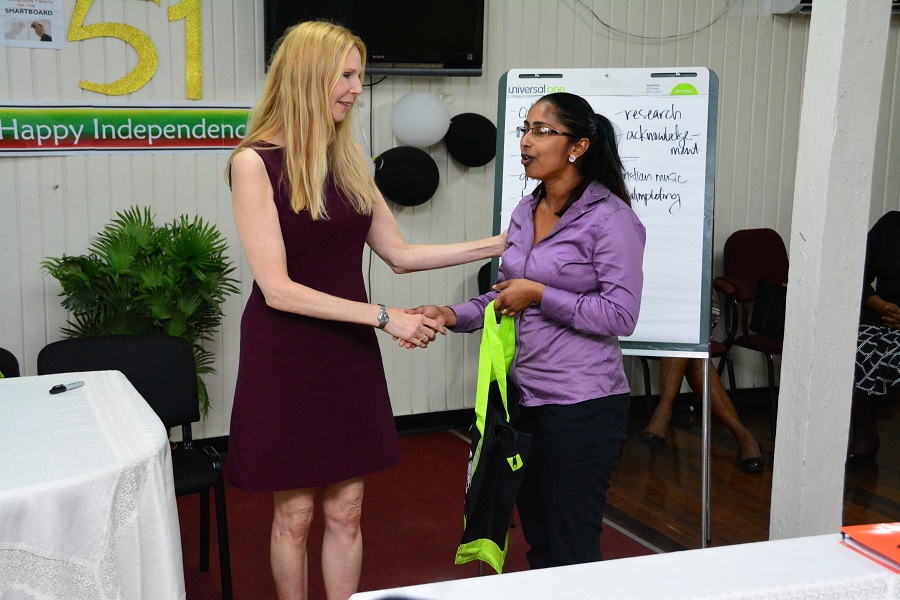 This participant expresses her gratitude to Ms. Randy Taran, Founder/CEO of Project Happiness, as she presents her with a token of appreciation.

Mr. Kevin Singh, who is a teacher at the Annandale Secondary School, Demerara-Mahaica (Region Four) expressed similar sentiments. ”My plan is to go back to school and I will have a workshop with my staff, then we are going to filter the information to the students,” he said.

Schools Welfare Officer, East Berbice-Corentyne (Region Six), Mr. Stephen Bactawar said that he plans to host a staff development session with his colleagues to teach them the concepts that he learned at the workshop. ”We will put [it] together and try to implement in the schools,” he said.”