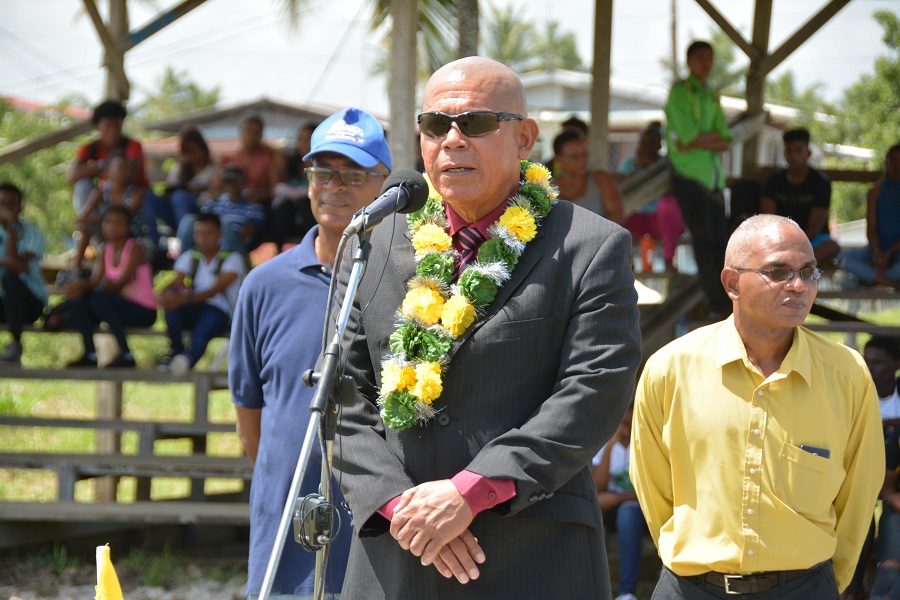 Georgetown, Guyana – (May 22, 2017) Minister of State, Mr. Joseph Harmon, today, said that the Government of Guyana is committed to working and engaging with the Guyanese diaspora as he declared open the Regional Project for “Effective and Sustainable Diaspora Engagement for Development in the Caribbean”, which focuses on providing entrepreneurs of Guyanese origin residing overseas with an opportunity to explore prospects for establishing small and medium-sized enterprises (SMEs) in their home country based on an assessment of the major sectors.

Ten participants, drawn from Canada, the United Kingdom and the United States will attend workshops, interact with local stakeholders and agencies, and conduct site visits to areas relevant to their business interests, which range from software development to maternal and child healthcare services. This initiative will also help to establish networks and create opportunities for new and innovative entrepreneurship initiatives, including those geared to increase employment in low income communities in Guyana.

Minister Harmon, in delivering the feature address, in his capacity as Acting Minister of Foreign Affairs, said that the workshop is a testament to the administration’s commitment to fostering relations with the Guyanese diaspora as it had promised during its elections campaign.

“We always made it very clear that when we get into office we will put the engagement with the diaspora and the Government of Guyana on a firmer footing than what we found when we got into office. So I want to say, today, that this is part of that promise that we made to the people in Guyana, here in Guyana and in the Diaspora, that we will put diaspora affairs on a firm footing and so that we find that the diaspora no longer is just Guyanese resident abroad, but people who are participating in the development of their country. We do not consider you just persons who are coming here looking for investment, we consider you to be an integral part of the make-up of what we call the Cooperative Republic of Guyana,” he said.

Minister Harmon noted that the project can be considered a historic one since it represents a collaborative effort between the Government of Guyana and the IOM. This he said, is unique, since the project is an off-shoot from the Guyana-Diaspora Project document, which was launched in 2012 with the express objective of streamlining, in a sustainable manner, the interaction and relationship between the Government of Guyana and the Guyanese Diaspora.

Minister Harmon noted that the initiative will complement the efforts of the Government in helping to top-up and to tap into the human and financial resources available within the diaspora, among other deliverables.

More than that however, he said that the Project also offers the Government the opportunity to provide assistance through facilitating structures, access to stakeholders to help to germinate business ideas that enterprising members of the diaspora may have to offer.

“The ‘Go See Visits’ Project, therefore, must be recognised as a tangible effort to further cultivate our strengthened relations with the diaspora. It is no secret that the Guyanese Diaspora comprises our country’s men and women, who number perhaps, as many as those who reside here in Guyana and arguably, some say even more, as was posited by some commentators. However, I wish to assure you that the Government of Guyana is extremely mindful of the importance of each and every one of you and of the commitment that groups that make up the Guyanese Diaspora; wherever it is, in the Caribbean, in North America, in Europe, in Africa, and other areas of the world that as such, as a Government, we are committed to ensuring, at all times, that our stated and functional diaspora strategy reflects this policy in a transparent and even-handed manner,” he said.

Pointing out that the Project aspires to achieve the practical goal of creating employment in low income and vulnerable areas, among others, Minister Harmon noted that as a pilot project, its success will certainly be one which will precipitate its sustained replication as outcomes for which the Government of Guyana is most desirous.

“While I recognise that some participants may initially view this initiative as exploratory in nature, I have no doubt that after this experience the week will surely concretise the decisions which you will make and that you will venture, wholeheartedly, into the activities which you want to get engaged in. The Government of Guyana wishes to commend the efforts of all prospective investors and entrepreneurs, who have shown the interest to respond to our request for submissions of interest in participating in the Project, especially those who have been selected on this occasion,” the Minister of State said.

To further demonstrate its commitment to including and engaging the diaspora, Minister Harmon said that the Government, again in collaboration with the IOM, is in the final stages of concluding the New Diaspora Engagement Strategy and Action Plan, which will formally guide the relationship with the diaspora.

The Action Plan is expected to address the concerns, which members of the diaspora have and have had over the years. This comprehensive policy document, Minister Harmon saidn will not be a dormant white paper but will instead, be a policy guide that will require stakeholders to adhere to principles based on international and other proven best practices and will be predicated on the unavoidable pervasive precepts of accountability and transparency.

“The Government has absolutely no equivocation whatsoever about the critical role our diaspora must play in Guyana’s development and as our country strives towards achieving the sustainable development goals in 2030 and well beyond. This strategy document is with Cabinet, it is actually engaging the attention of a sub-committee of the Cabinet and we have given the undertaking that it will receive our urgent attention so that the strategy itself, and the Action Plan which emerges out of that, will become a reality in a very short space of time,” he said.

Meanwhile, Regional Coordination Officer and Chief of Mission, International Organisation for Migration (IOM) in Guyana, Mr. Robert Natiello, in his remarks said that the organisation believes that this pilot is a step in the right direction for the Government, which will provide a powerful stimulus to support its continued development.

“IOM encourages the Government of the Co-operative Republic of Guyana to continue to develop and implement policies that can create the right atmosphere, conducive to diaspora entrepreneurship, and collaboration between the diaspora investors and local business owners,” he said.

He noted that the resources, which flow across borders, are immensely varied and range from skills, knowledge and ideas to cultural capital, finance and trade linkages. With the right conditions in place, Mr. Natiello said that transnational communities will spontaneously transfer resources and strengthen links between their countries of origin and destination regardless and often in spite of, administrative, regulatory and other constraints.

“Your role as diaspora entrepreneurs in the development will go beyond remittances sent home. Your contributions will have the potential to extend across a wide spectrum of human development processes, including fostering business development, creating jobs and innovation here in Guyana and supporting the development of economic, political and social capital in the country. Your direct investment as entrepreneurs can strengthen prospects for economic growth in Guyana by fostering the formation and growth of businesses, supporting innovation and developing new sectors of the economy,” Mr. Natiello told the participants.

Meanwhile, Mr. Owen Verwey, Chief Executive Officer of the Guyana Office for Investment (Go-INVEST), in his remarks, said that Guyana is open for business and has opportunities that either have never been explored or are underexplored and requires persons with the expertise, skills and other resources to develop them. He urged the participants to take advantage of the opportunity so that they can achieve profitability and sustainability.

“The opportunities are waiting for those who’ve got the knowledge, the experience, the access to capital and the methods of bringing ‘know-hows’ to the market in today’s world, to benefit from that. So I’m happy you’re here and I would like to encourage you to continue looking at all of those major opportunities and to benefit from them. When you’re on the ground, there is no better business information, business knowledge you can gather from actually being on the ground, speaking to people, looking at the lay of the land, gathering real data that is meaningful for the business that you’re considering entering and you’ve had that opportunity here,” Mr. Verwey said.

Additionally, Head of the Guyana Diaspora Unit, Mr. Michael Brotherson, said that diaspora engagement though not a new phenomenon, has been becoming the focus of profound attention for many countries, including developing countries like Guyana.

“The evidence-based approach to diaspora engagement has helped to ensure that the concept is strategically factored into the economic and social development of countries like ours. The available skills and expertise, resources, philanthropy, the investment, real and potential and the international advocacy on behalf of country, are about a few of the incontestable and sustainable benefits that do ensue from structured diaspora engagement,” he said.