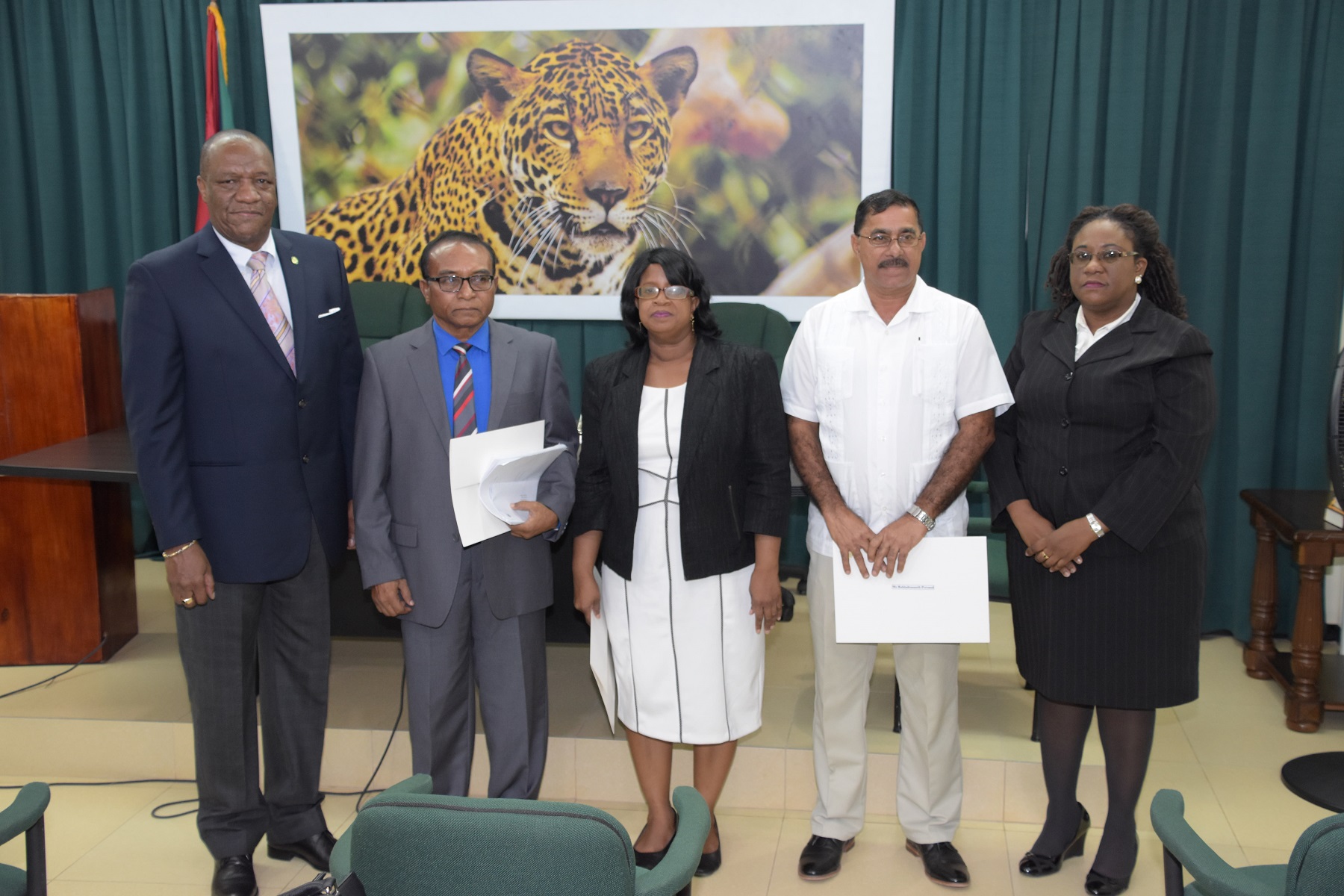 Georgetown, Guyana – (May 20, 2017) Minister of State, Mr. Joseph Harmon, today, visited Alexander Village, Georgetown, where he not only met with residents to listen and address their concerns but also donated a quantity of sports equipment to the youths of the village to keep them meaningfully occupied.

Minister Harmon, who was accompanied by representatives from the Georgetown Mayor and City Council (M&CC) and the Ministry of the Presidency, during a community meeting at a resident’s house in Fourth Street, Alexander Village, pledged to do everything possible to address challenges plaguing the community, ranging from lack of proper drainage, crime and security, the lack of street lights and a playground for the children.

He noted that the meeting was organised in an effort to hear directly from the residents and that the Government is cognisant that there are many challenges, which affect residents’ daily lives. He said, however, that the administration is committed to building stronger, healthier, more vibrant communities and as such, will ensure that the voices of the citizens are heard.

Minister Harmon noted that the new administration has placed significant focus on strengthening the capacity of the people and improving their lives and this can be seen in the allocations made in the National Budget in the areas of education, public infrastructure, health and security. Brighter days are, therefore, ahead for the citizens and their communities, he said.

With regard to drainage in the area, Minister Harmon committed to engaging the M&CC with the view of working out some possible solutions. The representatives of the Council also assured the residents that the matter will be raised at the Council’s meeting. However, Minster Harmon urged the residents to play their part too, in ensuring that once the drains have been cleared, garbage and other materials are not dumped into them.

“The Mayor and City Council had done work here a few months ago and so I will engage them. However, you, the residents, have a responsibility too. The citizens must take responsibility. We share some amount of responsibility in ensuring that it is kept clean. Some of these things are due to human action, like the dumping of garbage and so on into the drains and so we must decide to take care of what we have,” he said.

Some issues were raised in relation to petty crimes in the area and Minister Harmon has undertaken to speak to the Divisional Commander of the Guyana Police Force to see what can be done to strengthen security in the area.

Even as the country continues to pursue a ‘green’ economy, the Minister used the opportunity to congratulate the village on the cleanliness of its environs, as he noted that it represents one of the tidiest, cleanest villages around the country.

“I would like to commend the residents for the way they keep their environment clean. I think if we kept competitions for the best-kept communities, Alexander Village will run away with the prize very often. You are aware of the push we are making for a ‘green’ state and a ‘green’ economy and I think we can have a better place, environmentally, if we start from our homes and how we deal with our environment. So it is good to see it starting here and starting with you. This should be a model community for the rest of Guyana,” Minister Harmon said.

He urged the residents to work with the Government, the M&CC and all other agencies to help to improve the lives of the citizens so that a better country can be developed. 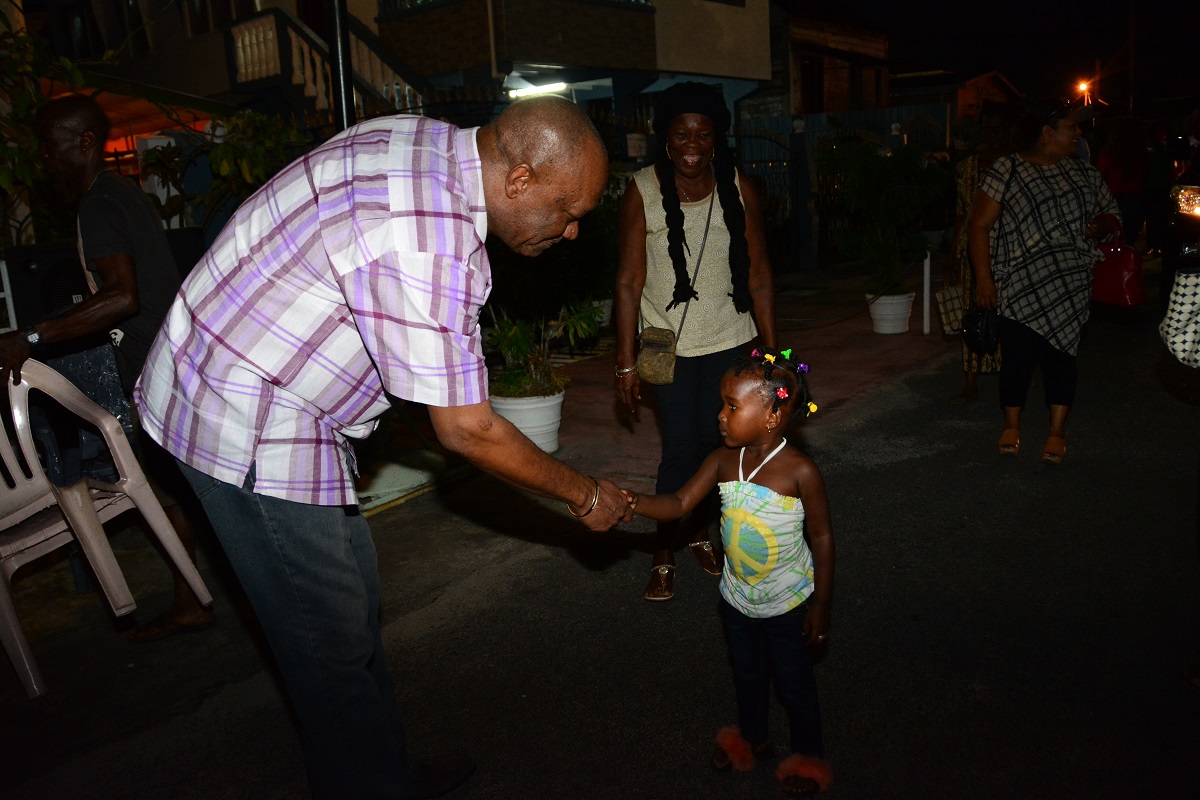 In addition, Minister Harmon donated a quantity of basketballs, footballs, cricket bats and board games to Mr. Kennard Lovell, a villager, who has opened his home to the youths in the community, providing a safe space where they can spend their leisure time. His home offers a library, gym, reading classes, games, bicycles and quadracycles, which he has built himself for the younger children, free of cost.

Praising the initiative by Mr. Lovell, Minister Harmon said he is happy to make the donation, which will assist the children and add to the resources presently available.

Mr. Lovell, in an invited comment, said that he is grateful for the donation from the Minister as it is costly to replace the gear and it will certainly go a long way in adding value to the lives of the young people in the area.

“I have always loved children and so when I came here and realised that there was no place really for young people and children to be, I decided to see what I can do to assist and here we are today,” he said.

Meanwhile, the residents expressed gratitude to the Minister for visiting them and listening to their concerns. “Minister, we want to thank you for being here and we are very glad to have you with us today,” Ms. Rohini Boodram said.

Another resident, Mr. Winston Raynard, said “Most of the issues that were aired, I know that they will be addressed because we have the Minister of State with us here and we know that he will assist.”