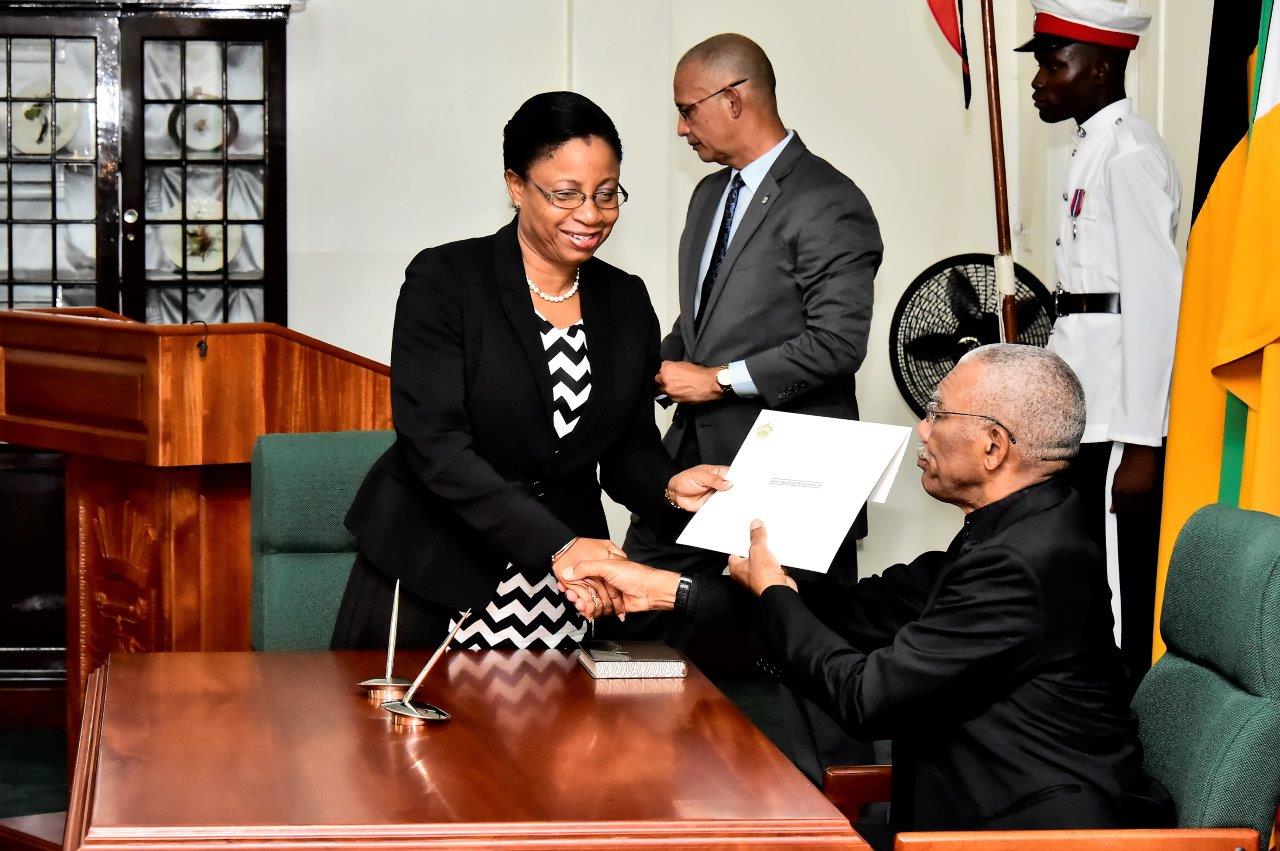 Georgetown, Guyana – (May 17, 2017) Two judges were, today, sworn in as Justices of the Court of Appeal of Guyana, bringing to an end the shortage, which arose following the retirement of Chancellor (ag) Carl Singh and Justice of Appeal B.S. Roy, earlier this year. President David Granger said that the installation ceremony of judges is an affirmation of the Government’s commitment to ensuring a judicial system that reflects the values of independence, impartiality and integrity.

The appointment of the two Judges; Justice Roxane George-Wiltshire and Justice Dawn Gregory, brings the complement of Justices on the Court of Appeal to three. The full complement is five Justices, but a minimum of three are required to hear cases.

“The Government will continue to respect the authority and dignity of the judiciary. The judiciary’s efficiency relies on there being a full complement of judges and magistrates. The Government will support the efforts of the Judicial Service Commission [JSC] in ensuring that vacancies are filled promptly in order to ensure respect for the recommendations for judicial appointments based on objective criteria, which have been prescribed,” the President said during his address at today’s ceremony.

Justice Roxane George-Wiltshire receives her instrument of commission from President David Granger during the swearing in ceremony.

The assurance of filling vacancies with qualified appointeesalso applies to those within the High Court, and President Granger also told reporters, in an invited comment, that once recommendations for those positions are made by the JSC they will be promptly considered. “I needed some additional information and I sent a request to the Chancellor of the Judiciary to provide that additional information,” the President told reporters.

In his address, the Head of State assured that the Executive branch of Government is committed to ensuring that the Judiciary is unbiased, unblemished and unmindful of personal prejudices and also operates without interference from any other arm of Government. “Judicial independence means that the judiciary must be protected from both private and partisan interests, such as from persons or pressure groups, and from the influence and control of the other branches of Government. Judicial independence is essential to ensure the integrity of the rule of law. The rule of law requires that everyone should be subject to the law and prescribes that no one should be above the law,” he said.

As a result, the President highlighted steps that the Executive has taken to ensure that the judiciary is independent, including the enactment of the Fiscal Management and Accountability (Amendment) Act of 2015, which provided, for the first time, the financial autonomy of the judiciary in accordance with the Constitution. 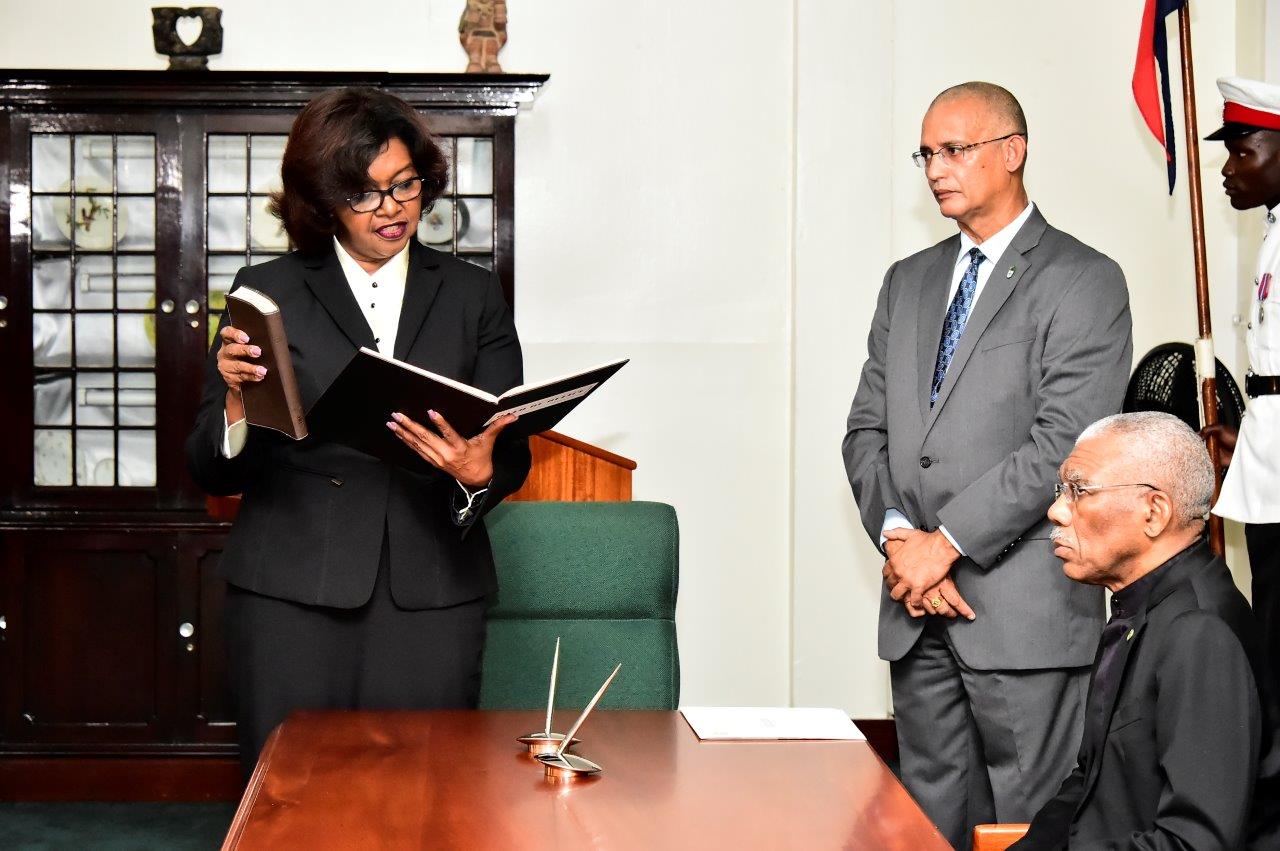 The President noted, however, that the judiciary has a vital role to play in maintaining its own independence, and that, judicial officers, therefore, must demonstrate the highest standards of impartiality. “They must be rigorous in their research, conscientious in consideration of matters brought before them and cogent in their judgments. It is an ineffable principle of justice that decisions should be based only on objective criteria, rather than on the basis of bias, betraying improper preference for one person or one group of persons over others,” the President said.

Justice Gregory said that she is honoured to be appointed to the Court of Appeal and believes that her experience, having served as a judge in the High Court, will serve her well in the future. She touched on the issue of back logged cases, stating that judges have been constantly working to address this issue. “Each judge is asked to try to do his or her best to try to reduce the backlog. We now have new procedures in the form of new Civil Procedure rules and Family Court rules, which should help matters to move faster and bring them on to hearing a lot earlier than under the old regime and I believe that when we settle down with those rules that should go a long way in helping to clear the backlog,” she said.

Justice George-Wiltshire previously expressed that she was proud to serve her country and that she would strive to make a difference in the administration of justice in Guyana. She said that one of the immediate projects that she will focus on include tackling the backlog of cases as well as providing more sensitisation to the public about the functioning of the judicial system in Guyana.

President Granger meets with Opposition Leader on appointment of Ombudsman

‘JSC upholds the independence of the Judiciary’ -President Granger