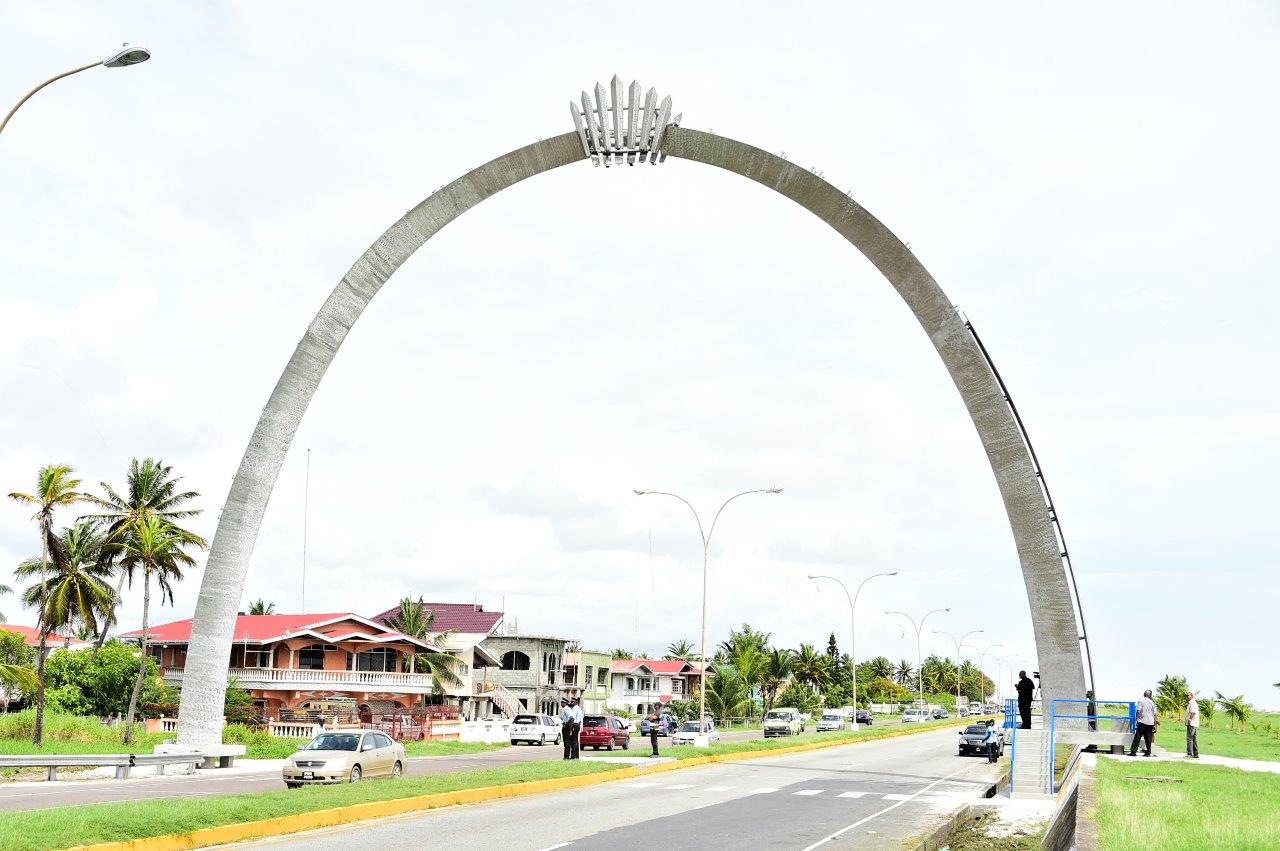 Georgetown, Guyana – (May 13, 2017) President David Granger said that the commemorative arch, which was donated by the Ansa McAl Group of Companies for Guyana’s 50th Independence Anniversary sends a signal of a vibrant Caribbean economy and is a tribute to corporate investment. The Head of State made these remarks at a commissioning ceremony held today at Cummings Lodge, Greater Georgetown where the arch marks the eastern boundary of the City.

President Granger said that what is good for Ansa McAl is good for Guyana and for the Caribbean Community (CARICOM) and added that the erection of the arch is an exemplification of the strong public-private partnership between the country and company. He said that it epitomises the friendship between two Anglophone Caribbean states; Guyana and Trinidad and Tobago, particularly as it relates to their commitment to cooperation within CARICOM.

The Head of State added that the arch is now a permanent and precious landmark of the national capital. “Eastern Georgetown is changing rapidly as land for air and road transportation, housing, industrial and commercial expansion is being exhausted and development is pushed eastwards. The construction of bridges, roads and social infrastructure has accompanied the establishment and enlargement of these settlements. This arch, therefore, is more than just a marker of the City’s eastern border. It is a signpost which identifies the frontier of a fast-developing administrative, commercial, educational and residential zone,” he said.

The commemorative arch at Cummings Lodge in recognition of the 50th anniversary of Guyana’s Independence. The arch was donated by the Ansa McAl Group of Companies.

Ansa McAl’s Managing Director, Ms. Beverley Harper said that President Granger’s view of a strong Caribbean economy was shared by the company’s late Chairman Emeritus, Dr. Anthony Sabga, who she described as a visionary that was particularly interested in Guyana. “Dr. Sabga was such a visionary, but moreso, he was a visionary for Guyana… He felt that Guyana was the future of the Caribbean and the future of Ansa McAl group. He really believed in Guyana and loved Guyana and I believe that he will be remembered with this always,” she said.

President Granger said that as Guyana transitions into a ‘green’ state, the city will be making greater use of renewable energy from sources such as solar and wind power and to this end, he was pleased to learn that the arch will be illuminated at nights using solar LED lights. He noted, too, that people living in the Cummings Lodge area, expect to enjoy a happy existence, with opportunities for strengthening family life, economic development and the protection of the environment. “This arch, therefore, is reflective of everything that we treasure as a nation. It has an important place in our history and it will play a defining role in our political evolution, our municipal maturity and our environmental development,” the President said.

Minister of Public Infrastructure, Mr. David Patterson in his remarks said that recalled that it was in July 2016 at the birthday celebration of Ms. Harper, that he initially made the pitch for Ansa McAl to partner with the Government to have the arch erected. “No one can deny that 50 years of Independence was a significant milestone but our need for public-private partnerships does not end with our Golden Jubilee. Today, Ansa McAl has stepped and publicly demonstrated its commitment to Guyana and its people. This new arch is practical as it is beautiful,” he said.

The Minister also spoke of the traffic problems on Thursday created by the installation of the arch during a rush hour and said that as the Minister responsible for infrastructure and transport, he takes full responsibility for the disruption. He also responded to comments regarding the necessity of such an edifice, noting years from now, the history books will reflect the efforts that were made to celebrate the preservation, uniqueness and commitment to the Guyanese society and the arch does exactly that.

Meanwhile, Chairman and Chief Executive of the ANSA McAL Group, Mr. Norman Sabga also apologised for the inconvenience that the traffic holdup caused on Thursday. He said that the company wanted the arch to be vibrant, futuristic and a symbol of the strength of Guyana and looking at the end result, it is clear that this was achieved. “What is very gratifying as well is that 100 percent of the design and construction, was done by Guyanese nationals and that was of particular importance,” he said.

The arch showcases the ingenuity of Guyanese engineering firms, Marcel Gaskin and Associates and Industrial Fabricators Incorporated (InFab), who worked on creating it for almost a year. Last May, another arch was commissioned at Agricola, the southern entrance to the City of Georgetown. That arch was donated by Banks DIH.