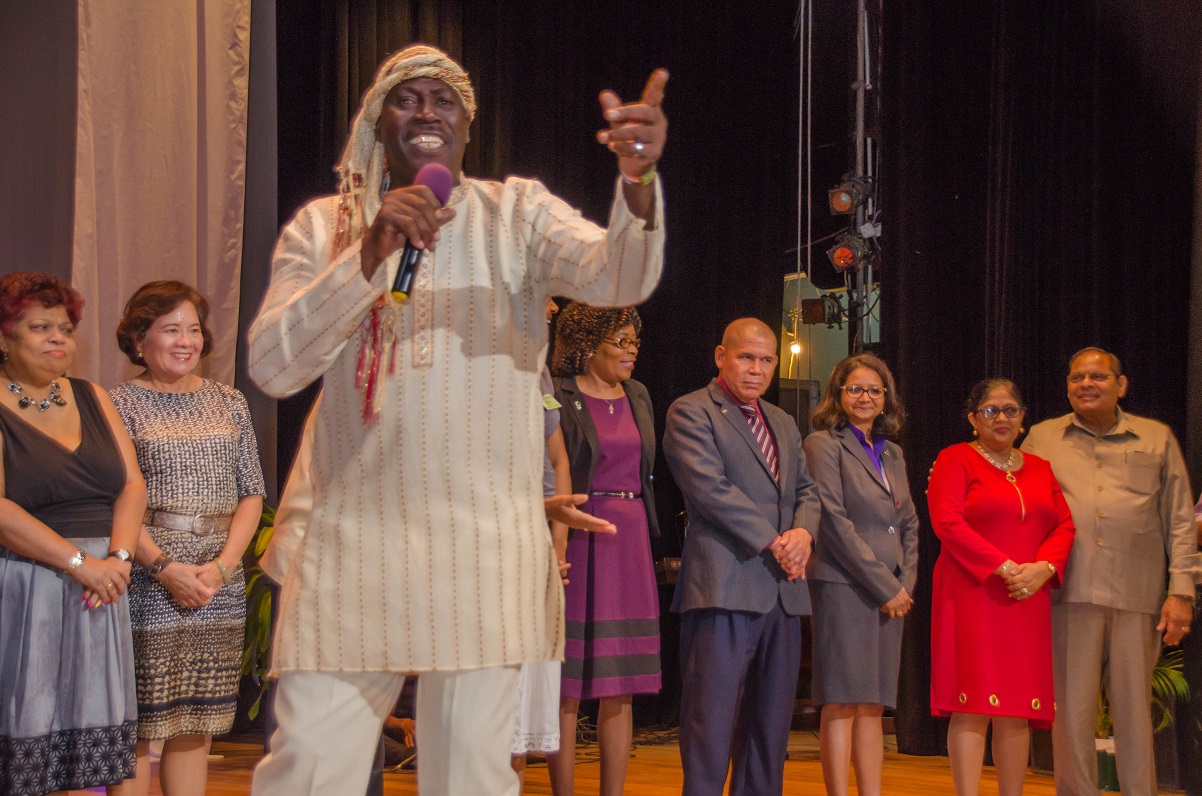 Georgetown, Guyana – (May 11, 2017) Guyanese, today, turned out in their numbers at the National Cultural Centre (NCC) to celebrate Social Cohesion Day 2017, where they called on their fellow citizens to view Guyana’s diversity as an asset and not a liability. Many of those in attendance also used the occasion to reject segregation and division and called on the Government, civil society, religious organisations and all sectors of society to work to deepen their commitment to the solidifying of a more unified country, even as the Ministry of Social Cohesion presented their five-year Strategic Plan for Promoting and Enhancing Social Cohesion to Prime Minister Moses Nagamootoo at the event.

“This plan was then validated and an implementation plan was prepared based on feedback from stakeholders, who all met in March of this year. We are extremely proud to be presenting the completed five-year Strategic Plan for Promoting and Enhancing Social Cohesion to the Honourable Prime Minister here today. Apart from the work, which has gone into crafting the strategic plan, the Ministry has also been engaging in a number of other activities geared towards advancing the Social Cohesion agenda,” he said.

These activities include countrywide sensitisation sessions, diversity education and inclusion workshops, ‘Face the community’ meetings in collaboration with the Ministry of Education and the recently hosted Harmony Village. With the Strategic Plan now finalised and handed over to the Prime Minister, Minister Norton said that it is expected that there will be a more structured and systematic approach to advancing the social cohesion agenda. However, he said that the effective implementation requires that all work together as one people to ensure that the way is charted to achieving social cohesion.

“Everyone has a role to play in the process as we’re all architects of Social Cohesion. This activity allows us to be able to envision a socially cohesive country in which diversities are embraced, conflicts resolved, networks and collaboration with stakeholders strengthened, equity promoted and decision making processes result in equal opportunities and benefits to all. The road ahead is a long one but with consistent efforts, we will arrive where we need to be. Let us live up to our motto of “One people, One Nation, One Destiny”, he said.

May 11 is designated Social Cohesion Day to celebrate Guyana’s cultural and religious diversity, while highlighting the importance of unity and the setting aside of differences for the good of the country.

Ms. Asia Haniff, from the ISA Islamic Academy, in an invited comment during the programme, said that while diversity means different, differences can and should be celebrated while working together for the common good of all.

“It is nice to see people come together like this from all around Guyana, celebrating each other’s differences; culture, religion, combined together and being as one, under our motto of ‘One People, One Nation, One Destiny. This all brings us together and we must see that even though we are all different, we all are one and so we should all come together, put our difference aside and cooperate. All individuals are different and it would be good to see those differences, appreciate them but still work together,” she said. 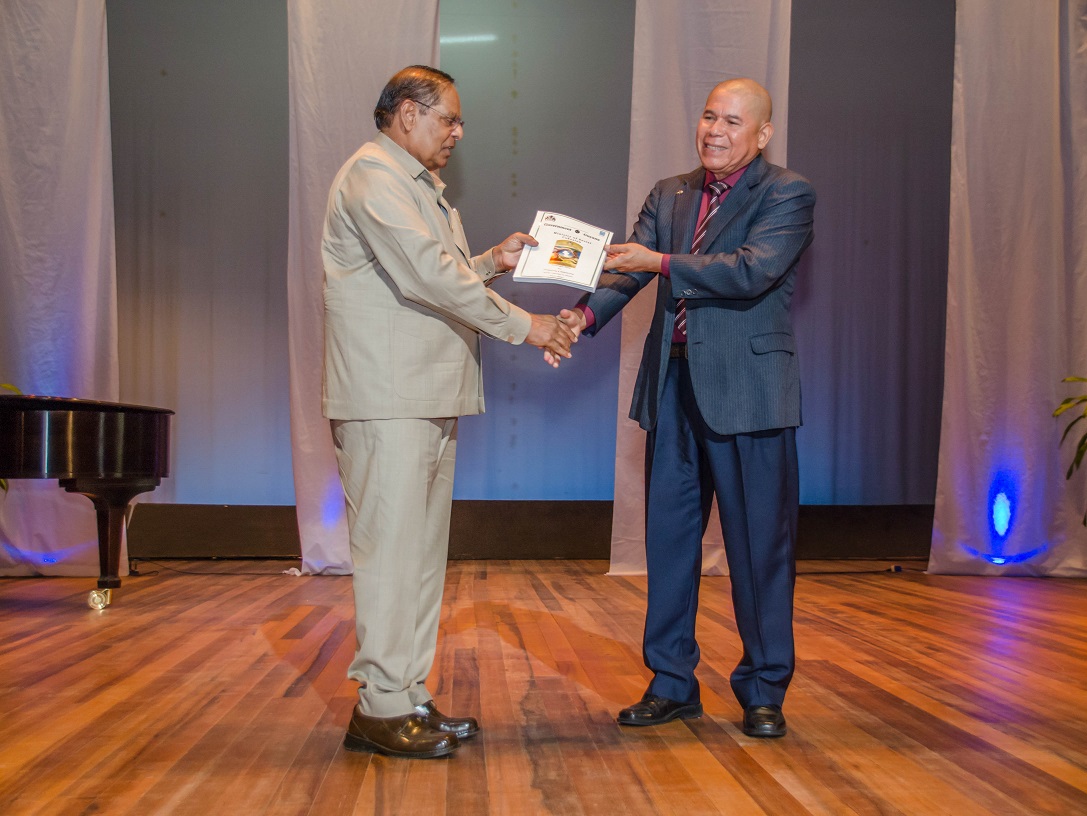 Mr. Deodat Tillack, a Pandit and Vice-President of the Inter-Religious Organisation (IRO) echoed similar sentiments, noting that while there are different ethnicities and cultures, every individual should begin to see themselves as Guyanese. “It is my belief that Social Cohesion Day sets the precedent for national unity and my message to all Guyanese is that we must honour our Motto of ‘One People, One Nation, One Destiny and we must remember that while we may vary from each other, we are all members of the human race and by extension we are all Guyanese and that is what should matter to all of us,” he said.

Mr. Ronald McGarrell, Chairman of the IRO, said that the establishment of the Ministry of Social Cohesion is validated by the observance of the event as it showcases how beautiful the country can become once the people are united and working towards a common goal. “Today’s programme was very much welcomed and it is an important step in realising the great potential of this nation. I think that this is a very important Ministry to this nation and I believe that God has put all of us together for a particular purpose and we should try our best to understand how we can find common ground to live together and work together,” he said.

For Ms. Mariam Khan, social cohesion is a new concept but through the observance of the day, she has been able to appreciate the other cultures. She is optimistic that with the Ministry of Social Cohesion’s mandate being established, that Guyanese can now move towards reconciliation and respect for each other. “It is very nice that we can observe this day and learn about the different cultures. I am part of an Islamic community so there is not much persons from other religions and so today presents the opportunity to see and observe how the other religions are. This really helps to bring everyone together and I am hopeful that others can see this for what it is,” she said.

Prime Minister Moses Nagamootoo, who delivered the feature address, noting that today marks the second anniversary since Guyanese last went to the polls in a general election, called on all citizens to use the observance of Social Cohesion Day to reflect and set differences aside. “We are a diverse nation longing to come together; to work together. We have one patrimony, one nation, one country, one nationality. We need policy driven by an institution that would bring our people together, that they must be able to put behind them political divisions and other forms of conflicts and divisions. The Ministry of Social Cohesion has a cardinal role to play. It is the glue that will bring us together. Our difference is our strength; our diversity is who we are,” he said.

The event was also attended by Mrs. Sita Nagamootoo, the wife of the Prime Minister, First Lady, Mrs. Sandra Granger, former Minister of Social Cohesion, Ms. Amna Ally, who is now the Minister of Social Protection, other Ministers of the Government and Members of the Diplomatic Corps. It was observed with prayers from the Muslim, Christian, Hindu, Baha’I, Indigenous and Rastafarian communities as well as cultural performances and musical renditions.