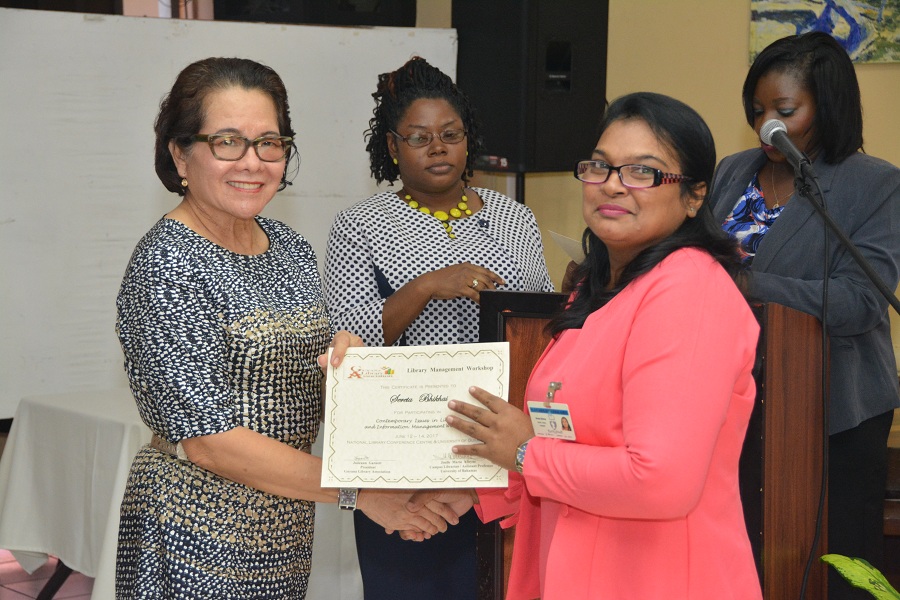 Georgetown, Guyana – (May 5, 2017) Minister of State, Mr. Joseph Harmon, today, met with residents of the Mon Repos and other surrounding communities on the East Coast of Demerara and assured them that the Government will not make any distinctions based on political affiliation or any other factor when it comes to the equitable distribution of basic public services and amenities.

The Minister, who was accompanied by Vice-Chairman of the Regional Democratic Council (RDC), Mr. Earle Lambert, during a community at the Mon Repos Primary School, said that he will do everything possible to address challenges being experienced by residents, ranging from deplorable roads, lack of representation from the Neighbourhood Democratic Councils (NDCs) to garbage collection as a matter of urgency.

“We do not see persons by the party they represent or their ethnic background… Government is for all of the people of this country. We have to ensure that all of communities are developed in an equitable way. We cannot have one area developed and another neglected because of political voting patterns. We cannot have one area developed and another left back because of ethnic polarisation. We require in this country, a oneness of purpose and social cohesion and that is the only way we can take this country forward,” the Minister said.

He noted that the meeting was organised in an effort to hear directly from the residents and that the Government is cognisant that there are many challenges, which affects residents in their daily lives. He said, however, that the administration is committed to building stronger, healthier, more vibrant communities and as such, will ensure that the voices of the citizens are heard. “I know that you have at your heart the development of your community, the development of this country, the cohesiveness of this country. I am here today to listen to your concerns; to hear what you have to say, to hear your suggestions and for us to work together to move this country forward. The development of our country is a total effort by all of us. No one group can develop Guyana. No one political party can develop this country. We require a concerted effort by all of us if we are to move this country forward,” Minister Harmon said.

He noted that the new administration has placed significant focus on strengthening the capacity of the people and improving their lives and this can be seen in the allocations made in the National Budget in the areas of education, public infrastructure, health and security. Brighter days are, therefore, ahead for the citizens and their communities, he said. “We do not claim to have all of the answers on all of the issues that confront us as a nation but we are working very hard to ensure that we bring all persons on board so that we can put that collective energy on building and developing this country where all of our people can enjoy that quality of life; that good life,” he said.

Directly addressing one of the issues, which was raised concerning the functioning of the NDCs and the of action by the elected Councillors, raised by Mr. Sydney Duncan of the Beterverwagting community, Minister Harmon told the residents that they must demand accountability and representation. He noted that if their interests are not being adequately represented, then they are empowered through the Local Government system, to take action. 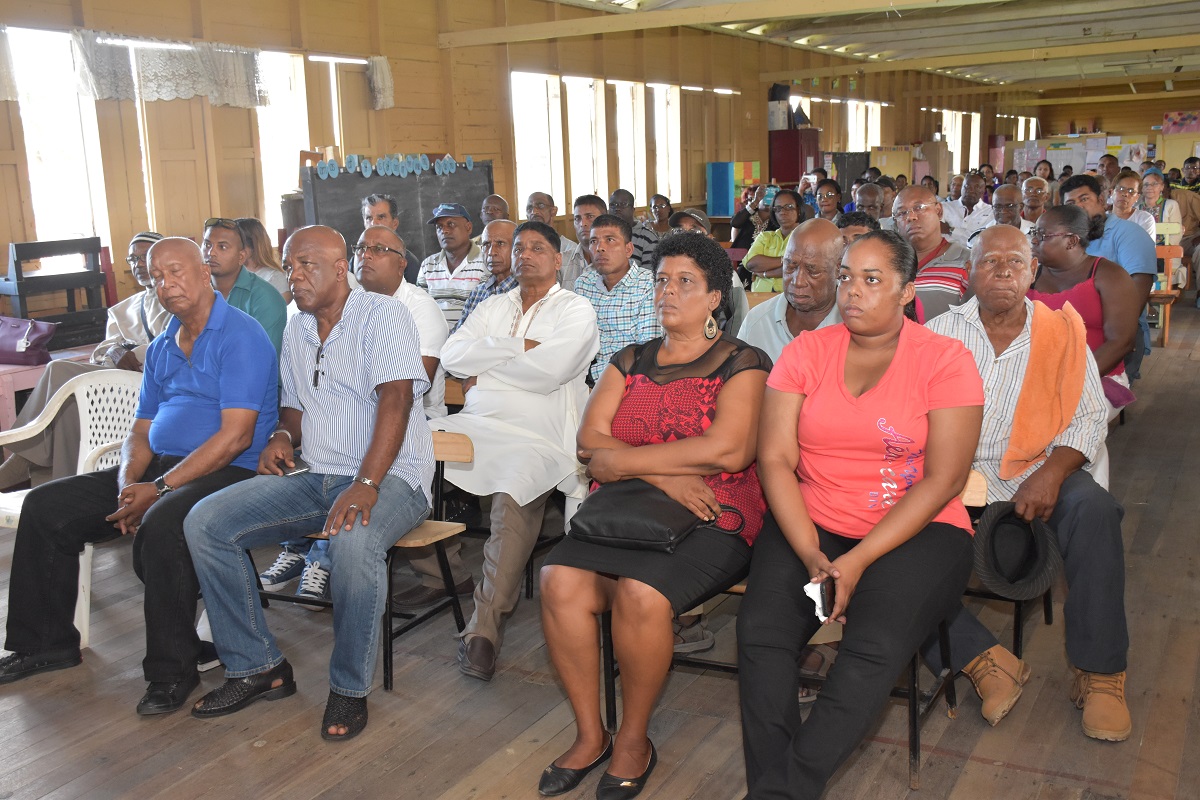 “If these people do not represent you, vote them out. It doesn’t matter where they come from. If they cannot represent you in your community, they serve absolutely no purpose. According to the Laws, you can also move a No Confidence Motion to have persons replaced in between elections. You elected them and the purpose of you electing them is for them to serve you. We fought for Local Government to give you the power to change what is happening in your communities and I ask you to exercise that right. Whether they are from the party I come from or not, if they are not representing you, there is no need for them there,” Minister Harmon told the residents.

He has further undertaken to engage the Minister of Communities, Mr. Ronald Bulkan, on the possibility of exploring ways to help improve the way NDCs function, since he noted that there is sometimes a disconnect between the Local Government organ and the residents. Many of the residents raised concerns regarding the deplorable state of their roads, drains and lack of street lighting. To this end, Minister Harmon has committed to having a team from the Minister of Public Infrastructure visit the community with the aim of carrying out a scoping mission, to determine the extent of works, which must be done. This announcement was met with sounds of approval from the audience.

The Minister also announced that rehabilitation works on Mon Repos Nursery and Primary Schools will commence shortly as expenditure has been approved through the Ministry of Education. However, the Minister of State also used the opportunity to implore the residents to work together for the good of the community as he noted that Central Government alone cannot fix all of the problems but self-help and a concerted effort are needed. 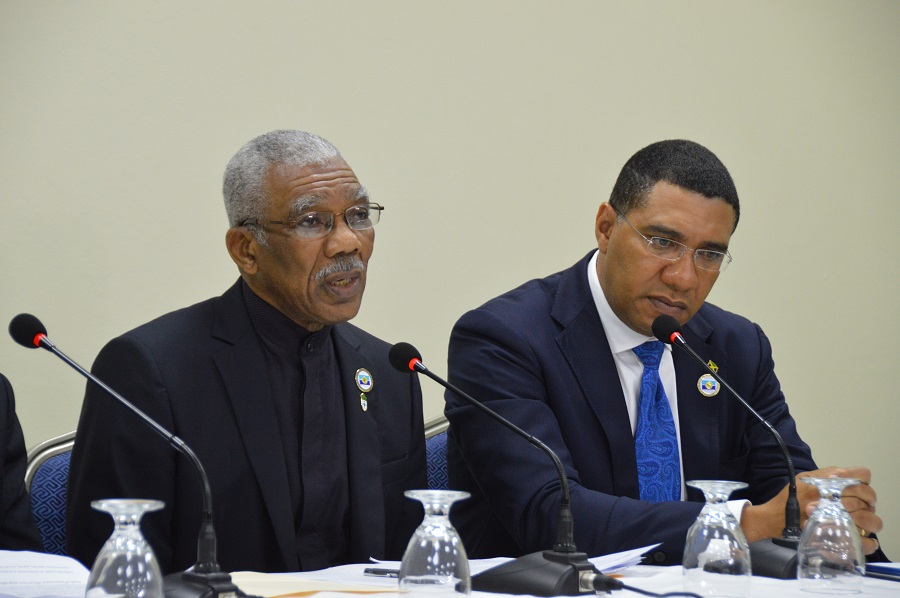 Minister of State, Mr. Joseph Harmon with some of the students of the Mon Repos Primary School , who serenaded him with their version of ‘Let us Cooperate’.

Meanwhile, Mr. Parmanand Persaud, a resident of Mon Repos, expressed gratitude to the Minister for visiting with and listening to the residents. “Even though it is a national holiday, you took the time to come and meet with us and listen to our concerns and so we really want to say that we appreciate this very much. We thank you,” he said.

Mr. Wylock Sahadeo, another resident of the area, in an invited comment, expressed similar sentiments, noting that he is thankful for the opportunity to air his concerns and to have them addressed. “I really appreciate what I heard from the Minister here today in terms of addressing the issues, which were raised and I want to say that I am thankful,” he said.

Minister Harmon has assured the residents that this is not a one-off meeting but going forward, a more conscious effort will be made to engage the citizens of the community.