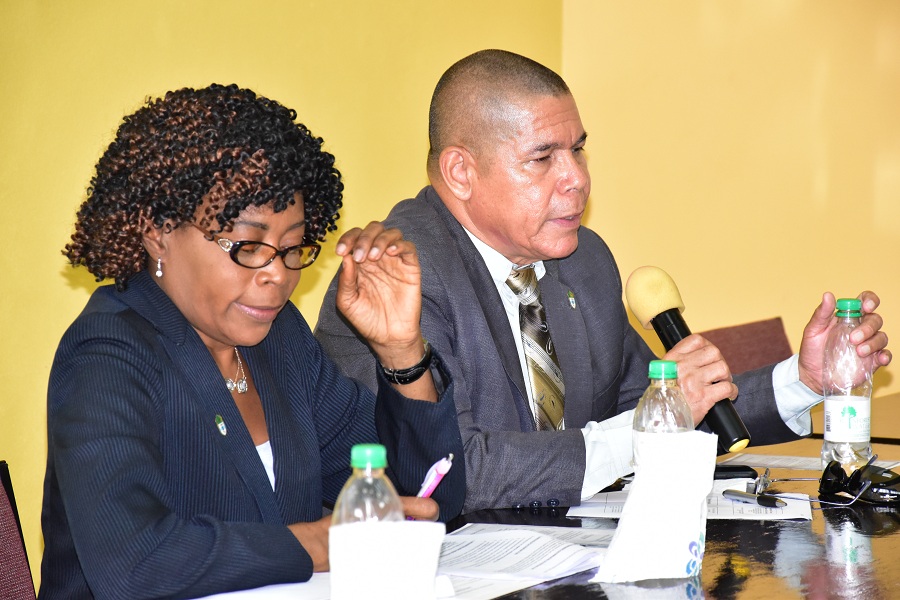 Georgetown, Guyana – (May 5, 2017) Minister of Social Cohesion, Dr. George Norton, yesterday, said that in order for Guyana to truly achieve solidarity every individual must put aside their biases and embrace diversity. The Minister made these comments during his address at the inaugural sensitisation meeting for regional and municipal councillors of Upper Demerara-Berbice (Region 10). Seventy stakeholders participated in the session, which was held in the conference room of the Business Centre in Linden.

“We know that [Social Cohesion] is a process… It’s going to take some time before we achieve it, but our vision is for a unified Guyana where our diversities; whether it is age, sex, political [affiliation], whatever it is, are embraced, we learn to accept them, where our conflicts are resolved, where networks and collaboration with stakeholders are strengthened… equity is promoted in our society and the decision-making process results in equal opportunities and benefits to all of us in the society,” he said.

The Minister also noted that while social cohesion is enshrined in Article 13 the Constitution which states that “the principal objective of the system of the State is to establish an inclusionary democracy by providing increasing opportunities for the participation of citizens and their organisations in the management and decision-making processes of the State, with particular emphasis on those areas of decision-making that directly affect their well-being”.

Minister of Social Cohesion, Dr. George Norton responds to a question posed by a regional representative, during the interactive session of the inaugural sensitisation meeting for regional and municipal officers of Upper Demerara-Berbice (Region 10). Ms. Sharon Patterson, Programme Coordinator at the Ministry of Social Cohesion is also pictured first, left.

Meanwhile, Ms. Sharon Patterson, Programme Coordinator at the Ministry of Social Cohesion, in providing an overview of the Ministry’s mandate, she said that social cohesion “is a process of nurturing individual and community relationships in order to build a unified Guyana”. She also noted that the Ministry has embarked on a number of initiatives, including the implementation of the National Strategic Plan on Social Cohesion 2017-2021 and has executed several projects aimed at boosting the earning potential of vulnerable and other groups.

During the interactive session, several persons expressed the view that the region needs to take the lead in fostering national unity. Mr. Charles Sampson, Councillor, Regional Democratic Council, said that he was pleased that the Minister took the time to explain the social cohesion process. “I listened very carefully to the Minister of Social Cohesion… and I support what he says that politics should not determine who [benefits] and who doesn’t… Our Constitution protects people and their religion and their political persuasion so we have to put that… into practice… I admire the Government for setting up the Ministry,” he said.

Meanwhile, in an invited comment, Mr. Derron John, Councillor, said that he intends to capitalise on the opportunity to participate in the upcoming Regional Inclusion and Diversity Training Workshop and to expose the members of his constituency to the training.

“We’re hoping that there will [be] continued interaction with the Ministry of Social Cohesion and that they will take this community, in particular, to another level where we will have more cohesiveness with our people… In my constituency; Constituency Eight, I intend to use that opportunity to have our community involved. I intend get them into groups to come out and be a part of the sessions and who I can’t reach, they will be able to meet directly,” he said.

Ms. Carole Chester, President of the Guyana All Age Dreamers Believe Foundation, said that the programme met all of her expectations and that she was eager to participate in the upcoming training workshop. “I couldn’t have expected better. I am certainly excited and thankful for all that they bring to the table for us in Linden; I really appreciate that. I look forward [to] the follow-up of the other programmes… that they have for us,” she said.

Address of His Excellency Brigadier David Granger President of the Cooperative Republic of Guyana at the Commemorative Ceremony for the 179th anniversary of Indian Arrival 2017.05.05