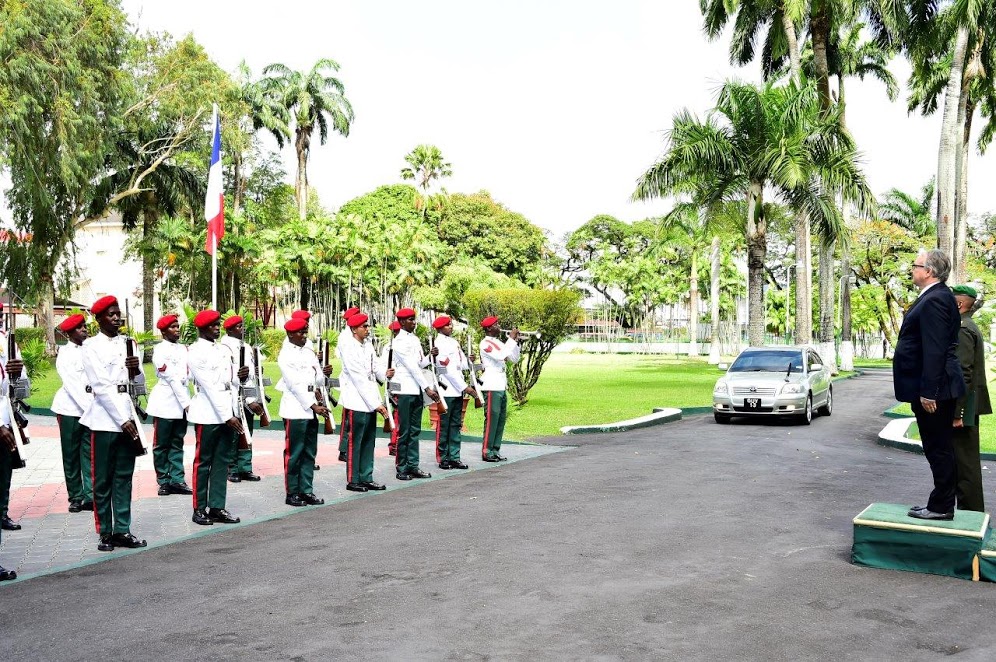 Georgetown, Guyana – (May 4, 2017) President David Granger said that Guyana is ready to bolster its already strong relationship with the French Republic through investment opportunities in areas such as agriculture, education, infrastructure, mining, oil and gas, sanitation, transportation and water and cooperation on matters relating to climate change and environmental protection. The Head of State made these remarks today when he accepted Letters of Credence from His Excellency Antoine Joly, accrediting him as the new Non-Resident Ambassador of the French Republic to Guyana.

Speaking on Guyana’s commitment to a low-carbon, low-emission development trajectory, President Granger lauded France’s role in achieving the historic global agreement on climate change also known as the Paris Agreement. “We are pleased to have signed and ratified the Paris Agreement. We are committed to working closer with France in preserving and protecting the Guiana Shield of which both Guyana and La Guyane are constituents. We shall place an additional two million hectares of our territory under conservation as part of our nationally-determined commitments under that ‘Agreement’,” President Granger said.

Speaking of the country’s ‘green’ state agenda, he said that it will place emphasis on environmental protection, biodiversity preservation, provision of eco-tourism and eco-educational services and promotion of renewable energy and practical measures to ensure climate adaptation.
Over the years, Guyana and France has shared strong relationship, which the President said is founded on the tenets of mutual respect for each other’s territorial integrity and sovereignty, mutual non-interference in each other’s internal affairs, cooperation for mutual benefit, respect for treaties and international law and the maintenance of regional peace and security. He also spoke of the many benefits Guyana has derived from its relationship with the French Republic. This ranged from debt relief and disaster relief in the aftermath of the 2005 floods, technical training for the Guyana Defence Force, the Guyana Police Force and the Guyana Fire Service.

Upon his arrival to State House, Ambassador Antoine Joly was welcomed with a military salute

“We anticipate, also, continued cooperation between our two countries at the multilateral level through the United Nations, the ACP-EU [African, Caribbean and Pacific Group of States-European Union] Partnership Agreement, the Economic Partnership Agreement between the CARIFORUM States and the European community and through bi-regional cooperation between the EU [European Union] and the Community of Latin American and Caribbean States,” President Granger said.

Meanwhile, Ambassador Joly, who will be resident in neighbouring Suriname, in his remarks said that the Government of France wishes to deepen its relations with Guyana and to move forward together to implement measures in the areas of security, judicial cooperation and environmental protection. “France would also be happy to accompany in its efforts of building links with the European Union, particularly in the framework of the economic partnerships between the EU and CARICOM [Caribbean Community]… I am convinced that we can build more fruitful relations based on cooperation between our two countries,” he said. 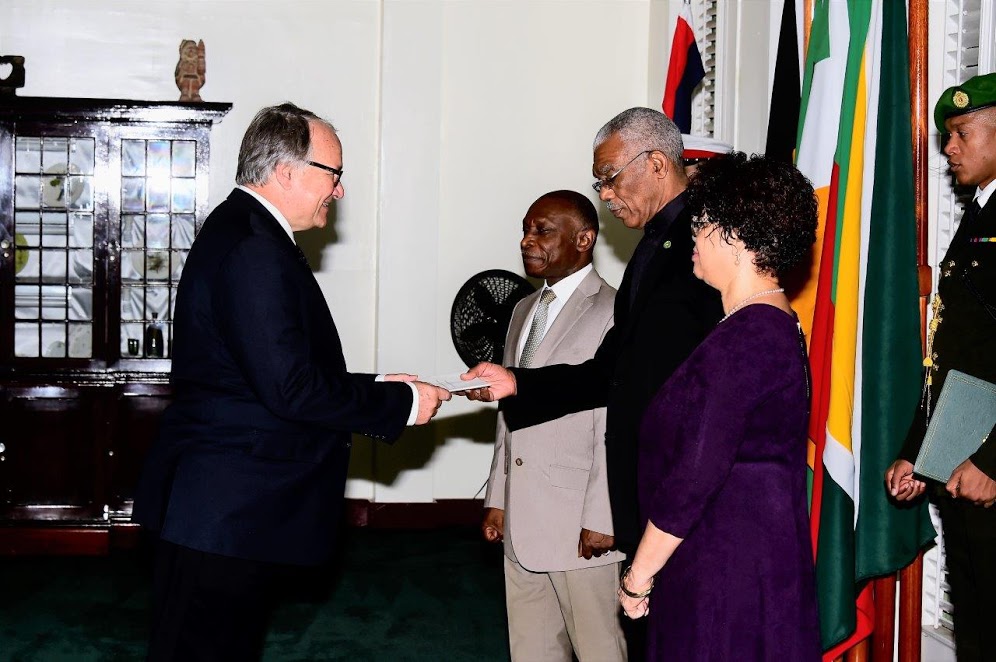 Ambassador Joly is the holder of a Master’s degree in law, a diploma from the Institute of Political Studies in Paris, and a post-graduate diploma in Social and Cultural Anthropology. Among the many positions he has held over the course of his career are Member of the French Parliament from 1993-1997 and Ambassador of France to Nicaragua from 2011 to 2015.

Remarks by His Excellency Brigadier David Granger, at a kite distribution exercise and meeting with residents of Friendship Village, Lower Pomeroon April 8, 2017