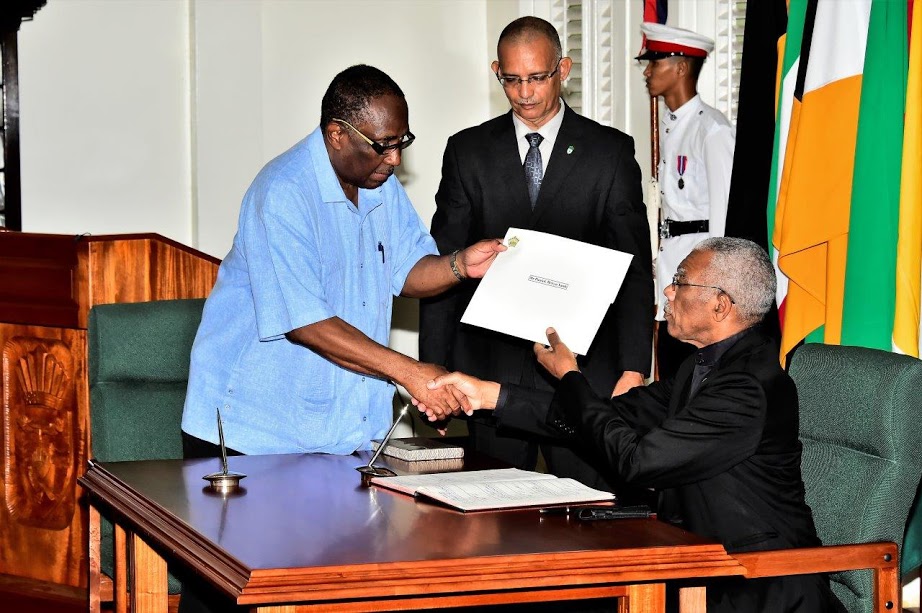 Georgetown, Guyana – (May 4, 2017) Trade Unionist, Mr. Patrick Melvyn Yarde was today sworn in by President David Granger as the acting Chairman of the Public Service Commission (PSC), a position, which automatically makes him an ex-officio member of the Judicial Service Commission (JSC), the Police Service Commission and the Guyana Defence Force Commission’s Board. The swearing-in ceremony, which accorded with Article 200 (5) of the Constitution of Guyana, was held at State House in the presence of Minister of State, Mr. Joseph Harmon and members of the PSC.

President Granger explained that since the removal of the previous Chairman of this important Constitutional body its work has been lagging behind. “It ought not to be delayed further because the function of the Public Service Commission and the Judicial Service Commission has been affected… This is entirely in accordance with the requirement of an efficient Government that the work of those four boards should not be delayed or paralysed any further,” he said.

He added that his Administration is confident that this new appointment is a step in the right direction, which will result in the efficient functioning of the four commissions. Further, with the appointment of the Acting Chancellor of the Judiciary and the Acting Chief Justice, the work of the JSC in particular, is expected to move apace.

In an invited comment, Mr. Yarde said that he is pleased to have been asked to serve in this new position and assured that he will perform the duties of his office in accordance with the Constitution. “It is my view…that the public service of Guyana be a very efficient, effective and professional career service, faithfully serving the Government of the day and the people of Guyana,” he said.

In October last year, acting in accordance with Article 225 (6) of the Constitution, the President ordered the suspension of Mr. Carvil Duncan pending the outcome of the proceedings of the Tribunal, which was set up to inquire, investigate and recommend whether he (Mr. Duncan) ought to be removed from office for inability to discharge the functions of his Constitutional posts.

Remarks by His Excellency Brigadier David Granger, at a kite distribution exercise and meeting with residents of Leguan at the Leguan Secondary School, Essequibo Islands – West Demerara (Region Three) April 9, 2017