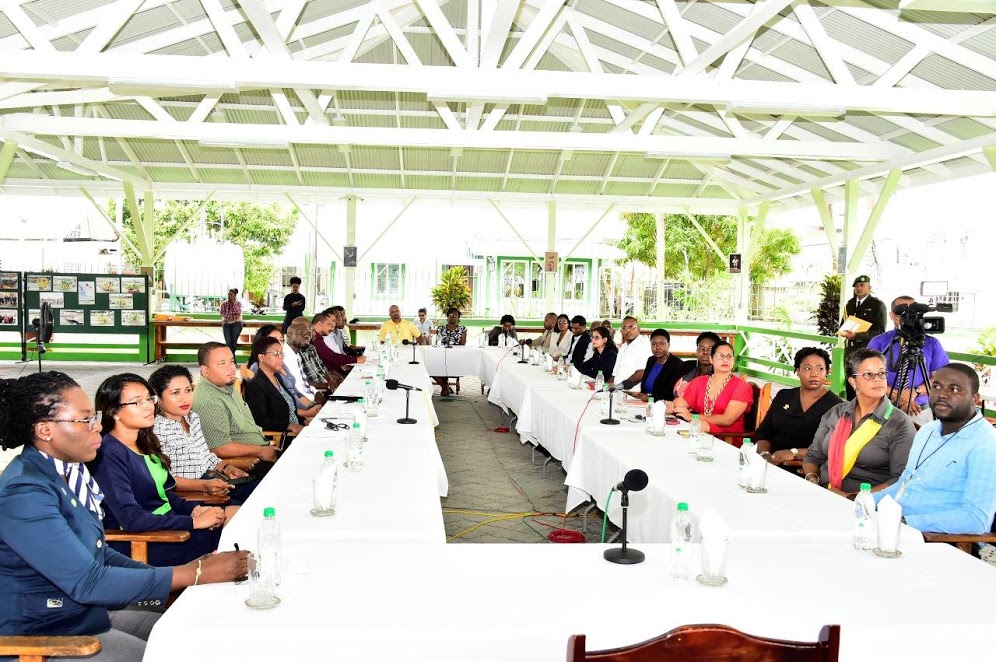 Georgetown, Guyana – (May 4, 2017) President David Granger, today, said that as Guyana transitions toward becoming a ‘green’ State, the stakeholder agencies must work together to develop a collaborative approach toward protecting and preserving the environment. The President was, at the time, addressing the board members of the five gazetted agencies within the environmental sector: the Wildlife Conservation and Management Commission, the Protected Areas Commission, the Environmental Assessment Board, the Environmental Protection Agency and the Wildlife Scientific Committee, during a meeting at the Baridi Benab at State House.

In order to function effectively and to efficiently drive Guyana’s ‘green’ agenda, the President said that the agencies will also need to ensure that they communicate with each other frequently so that their work becomes complimentary and cooperative rather than confrontational and conflictual. “Unfortunately the way some of the agencies and boards grew up, they did not need to develop the habit of collaborating with other agencies and boards… that is an accident of history but now we deliberately have to work toward getting out of our silos and speaking with each other and I regard this conference, this morning, as an attempt to reach beyond our specific mandates and develop a more multi-agency approach; a multi-year approach because what you are doing is not just for this year or next year it is something that will have an imprint on the rest of Guyanese history,” he said.

The Head of State told the board members that the stakeholder agencies must work together to develop a collaborative approach toward protecting and preserving the environment.

The Head of State said that the approach to the environment is in a process of continuous change, which means that the architecture of managing the environment must also change. Whereas, hunting was done on a smaller scale in the past, he said that today, such activities are conducted on an industrial scale. These acts, therefore, require controls at the level of the state and vigilance in order to avoid the destruction of the country’s environment. “I have asked and I hope that very soon it will be passed into law that every region should have a protected area of its own and you will see that each region will end up having a unique protected area… Ladies and gentlemen, the buck stops in this room; the protection of the environment in every aspect; our wildlife, our flora and fauna our waterways,” the President said.

Adding that the establishment of the Department of the Environment, under which these agencies fall, is a step toward improving the level of communication among the agencies, President Granger said that this is intended to help them to develop their efficiency levels and improve collaboration. He said that there is also a need to celebrate the country’s flagship agencies as well as demonstrate the ability of Guyanese to manage those agencies.

“I would like to see Guyana’s environment in the hands of Guyanese. We must always be free to cooperate with international organisations to seek their assistance and expertise, but after 51 years of Independence we must develop the expertise to manage our own environment in our best interests,” the President said.

In an invited comment following the President’s remarks, Chairperson of the Wildlife and Conservation Commission, Ms. Karen Pilgrim, said that the Commission is responsible for assessing the wildlife trade and looking at how the trade can continue in a sustainable manner. “I do believe in conservation rather than preservation, personally, meaning that there can be utilisation of wildlife but it needs to be controlled. There needs to be scientific information on what we can and cannot utilise whether for export or the wild meat trade and so the role of the Commission in that regard would be to look at controlling the wildlife trade taking into consideration sustainability of our wildlife populations,” she said.

Chairperson of the Protected Areas Commission (PAC), Dr. Raquel Thomas said that the management of protected areas is an important component of any ‘green’ state. Guyana recently pledged to allocate an additional two million hectares of land for conservation under the Paris Agreement, and Dr. Thomas said that this commitment is a significant one. “We are looking forward to working together with all agencies involved and maybe we will also have to have public consultations and so on related to this if you are going to declare a protected area. It has a process it has to go through and a key part of that is community buy-in as well. Also, we need to look at the ecosystems that are already protected. We have of course the Kanuku Mountains, Shell Beach, Iwokrama, which doesn’t come under the PAC but is a part of the protected areas system and of course we have Kaieteur then we have a community protected area that is going to come into force at some point,” she said.

Chairperson of the Environmental Assessment Board, Mr. Garvin Cummings said that he is honoured to be part of the process of protecting Guyana’s environment. “In terms of environmental preservation, we have to do that, but not to curtail our national development. We have to be able to establish a balance between exploiting our natural resources while at the same time ensuring the protection of the environment,” he said.

Chairperson of the Environmental Protection Agency (EPA), Mr. Patrick Williams said that it is important that the agency ensures that the decisions that it makes align with the President’s vision. “The EPA; the Board members are also aware of the issues and I think that at our Board, we see the relationship between what the President is saying and the work that we plan to do. We believe that the ‘green’ State development strategy is the overarching principle that we are going to use to make some of our decisions in terms of environmental conservation and also what kinds of development we are going to support and how we are going to support them,” he said.

Head of the Department of the Environment, Ms. Ndibi Schwiers, was also present at the meeting, and during brief remarks, thanked the Board members for taking on the challenge of being part of Guyana’s ‘green’ state development thrust. “We truly are on the cusp of transformative change in this country; a change that will shift the developmental thrust of the country to one that has a low carbon footprint, preservation of the environment, is people centred and harnesses and sustainably utilises the country’s vast natural assets. But the efficacy of this transformation is dependent to a large extent on how well you function in your role,” she said.

Today’s meeting is just another initiative aimed at highlighting Government’s commitment in advancing its ‘green’ agenda. Just yesterday, President Granger re-activated the Green Multi-Stakeholder Steering Committee (GMSSC), where he interacted with several stakeholders from government agencies and other bodies including the Guyana Lands and Surveys Commission (GL&SC), Guyana Forestry Commission (GFC), the Ministry of Communities, Ministry of Agriculture, Ministry of Business, Amerindian Peoples’ Association (APA), the Amerindian Action Movement, the Opposition, the Department of Environment, Office of Climate Change, Project Management Office and several other Government and non-governmental organisations.

The GMSSC was first established in 2009 and arose out of an agreement between the Government of Guyana and the Kingdom of Norway. However, following the change in administration, the committee had not met since 2015. President Granger, during yesterday’s meeting, said that the reactivation of the GMSSC demonstrates Government’s commitment to ensuring that development is not only people-centred but that it is also people-driven. The President said that the meeting also ensures that closer attention can be paid to the issues that need to be addressed as Guyana moves towards becoming a ‘green’ state. 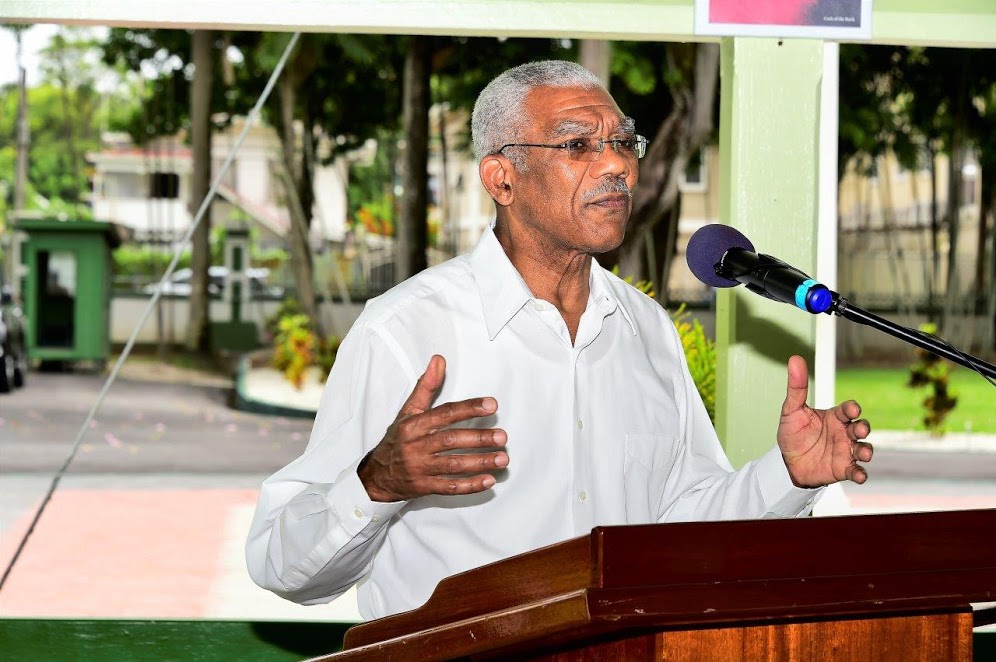 The Head of State told the board members that the stakeholder agencies must work together to develop a collaborative approach toward protecting and preserving the environment.