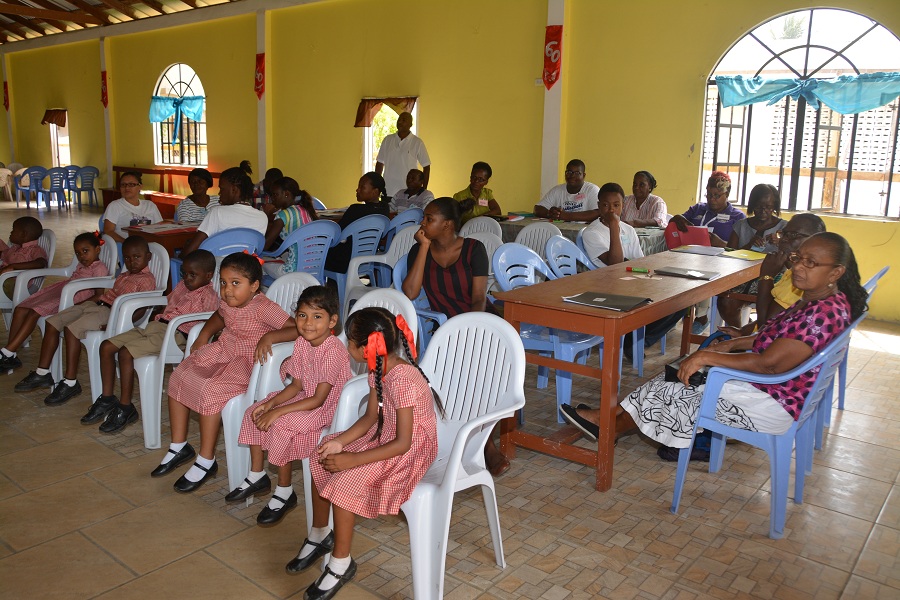 Georgetown, Guyana – (April 28, 2017) Minister of Social Cohesion, Dr. George Norton, today, charged community workers who participated in the 30th Diversity Education and Inclusion Regional Training Workshop to be bold and active participants in the sessions and to learn the skills that will help them to foster a unified nation. The Minister made these remarks during his address to the stakeholders of the two-day Workshop at the Victory Tabernacle Church of God of Prophesy, Vryheid’s Lust, East Coast Demerara (ECD).

“It is the community workers in any community that [are] important for the development of that community and the training that you’ll be exposed to today will help you to be able to help others in the community … We want you to look at it as something that your community is involved in, that you’re reaching directly to your community so that you will be exposed to the knowledge so that you can foster, you can promote social cohesion within your community,” Dr. Norton said.
Nineteen stakeholders, including parishioners of the church, who hail from communities such as Vryheid’s Lust- north and south, Better Hope, Ann’s Grove and Montrose are participating in the workshop. The Minister commended Pastor Roxanne Hanover of the host church, who after participating in a previous workshop, requested that the programme be brought to her community. He was also pleased that Ms. Phillipa Primo, Head Teacher and Class Teacher, Ms. Ashanti Lewis – both of the Vryheid’s Lust Nursery School, brought eight of their students to the opening session, reiterating that it is important that children’s first role models set the example for them to follow.

Some of the participants at the Ministry of Social Cohesion’s 30th Diversity Education and Inclusion Regional Training Workshop. Students from the Vryheid’s Lust Nursery School are also pictured.

Dr. Norton also said that much of the work that needs to be done to foster social cohesion in communities must start with the individual. “We could look at each other and see differences, but we would be better able to understand what the changes and challenges are when we are exposed to training like this … It will also help us to understand better diversity, that is the differences … and challenges associated with the kind of community that we have,” he said.

Ms. Natasha Singh-Lewis, Technical Officer at the Ministry of Social Cohesion, while providing an overview of the Ministry’s mandate, said that social cohesion “is a process of nurturing individual and community relationships” with the view of building a cohesive nation. As such, the Ministry has embarked on a number of initiatives, including implementing the National Strategic Plan on Social Cohesion 2017-2021 and has executed several projects aimed at boosting the earning potential of vulnerable and other groups.

Meanwhile, Ms. Genevieve Allen, Chairman of the Regional Democratic Council, Demerara-Mahaica (Region Four) said that she was happy to see so many young people participating in the Workshop. She then encouraged them to use the opportunity to learn news ways of interacting with their peers as the nation’s future rests in their hands. “Every time I speak of social cohesion I remind Guyanese that our motto says that we are one people, we are one nation and collectively, together we have one destiny,” she said.

Several of the participants said that they intend to use the knowledge that they have gained from the Workshop to better serve others from their communities and further afield. In an invited comment, Mr. Gladwin Hanover, a policeman and parishioner of the host church, said that his main reason for participating in the Workshop is to learn as much as he can so that he can share it with his subordinates at the Richard Faikall Police College, Essequibo Coast.

“My mother is the pastor of the church and she told me about the programme and I felt the need to sit in because of the content… I believe that this programme can assist me at my work place since I’m a policeman… I work in training… I believe at the initial stage of a [policeman’s] life it is important that they learn how to build trust, promote equality and build a network with stakeholders… I’m pretty excited because what is outlined [for the workshop] is exactly what I want to know,” he said.

Ms. Vernadine Rodrigues-Ragubeer of Vryheid’s Lust north, said she decided to participate in the Workshop because she wanted to gain a better understanding of what it entails. So far, she said that she has learnt “the importance of values and understand better how to relate to people”.

In addition, Mr. Shaqueil Marshall of Better Hope south, who said that he fellowships at the Better Hope Church of God of Prophesy and is a youth leader there, said that his pastor encouraged him to attend the Workshop. “So I decided to come to engage and get the knowledge so that I could take back to my youths… [So far,] I’ve gained and learned about values and self-valuing and knowing that your values are the foundation of your thoughts and your emotions and your actions and behavior … so I think that being here would help me a lot to help them so that I could [respond] to problems of the teenagers and the youths in my church,” he said.

As the workshop continues, the participants will be engaged in sessions covering topics such as, understanding biases, being human, understanding diversity and others, all aimed at advancing the social cohesion mandate. Trainers, Ms. Kala Seegopaul and Ms. Rishon Seebarran will lead the sessions, with assistance from Ministry of Social Cohesion, Liaison Officers Mr. Shabir Ali and Mr. Cleveland Hutson.

To date, the Ministry has hosted several Workshops across the country. These sessions involve stakeholders from faith based and women’s groups, senior secondary school students, regional officers, members of civil society and community development officers. Since January, workshops have been held in Paramakatoi, Potaro-Siparuni (Region Eight), at Aishalton, Upper Takutu-Upper Essequibo (Region Nine) and, most recently in several communities along the upper and lower ECD. A Workshop for youth was also held in collaboration with the Department of Culture, Youth and Sport of the Ministry of Education.

Forty-four complete Self Reliance and Success in Business workshop