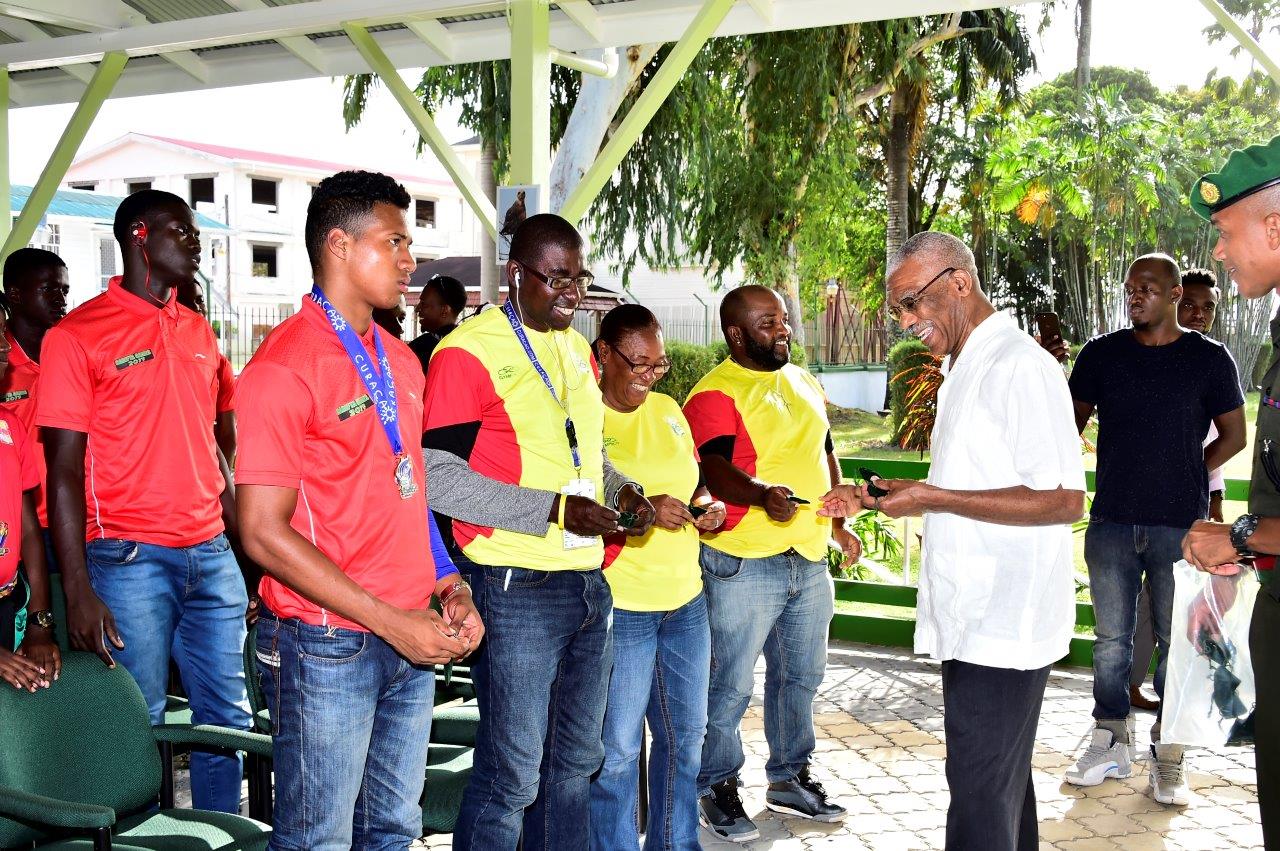 Georgetown, Guyana – (April 21, 2017) President David Granger, this afternoon, met with members of Team Guyana, who just returned from a successful stint at the Caribbean Free Trade Association (CARIFTA) Games in Curacao. The team’s courtesy call to the President at State House was their first stop after landing at the Cheddi Jagan International Airport and the Head of State expressed congratulations on behalf of Guyana for their stellar performance at the Games, which saw Guyana walking away with eight medals, including a Gold medal in the men’s 100 meter race for the first time in the country’s history of participating in the Games.

President Granger, in his address to the athletes said that the entire country is proud of the team and expressed the hope that they would maintain and improve on that level of performance in the years to come. “The world of sport is very important particularly for young people. I always compare track and field with what happens in what used to be regarded as our prime sport; cricket. The only reason Guyana was able to rise so high in cricket and produce international greats… is because it had a broad base so by the time you reached the top you really had people of excellence. But when sports has a very narrow base you find that you do not get people consistently of international standard and I would like to express our Government’s commitment to ensuring that there is more grassroots sport in the schools and in the communities,” the President said.

The Head of State then described in great detail the events of the annual Upper Mazaruni District Games, which consists of several communities from the Hinterland coming together on their own and performing various types of sport over a week long stint every year. “We have 1,000 athletes from 10 or 12 villages just having fun, but what I am saying is right there in the hinterland you see people coming out and doing something, which I have never seen on the coasts… I have never seen 10 villages raising their own money walking great distances to live together for a full week having fun, playing sport and I believe that if we have that type of camaraderie on the coast we would see … young people coming together playing sport and interacting with each other and having good fun. I believe that as the years go by the standard of sport will raise and will rise … Competition is important and I am very proud of what you all did and on behalf of the Government of Guyana and my own behalf I would like to extend sincere congratulations to you,” the President said.

The President’s policy of having a broad base to produce quality athletes was expanded on by Director of Sport at the National Sports Commission (NSC), who, during brief comments said that the NSC has recently begun to recruit athletes from national school championships. In fact, he boasted that the 2017 CARIFTA team consisted of four athletes, who had been scouted from last year’s championships.

The President presented the athletes with commemorative coins as a memento

“The National Sports Commission is committed to work with these athletes… to ensure that we see the preparation and continued support to those athletes in their development. These athletes will form part of the preparation for the hosting of the South American Junior Championships due in June and the National Sport Commission will be lending support tangibly to the Athletics Association of Guyana (AAG) in preparation for the hosting of these games. I uttered to [the President of the AAG] Mr. Hutson and his executive of the commitment of the Government of Guyana through our manifesto in 2015 in which [the President] stated the importance of sport and development of young people in general and of course we ought to reiterate the words: sports for all. That is a commitment that through the NSC we are building up to and we will continue to do so not only in athletics but all of the other disciplines,” he said.

President of the AAG, Mr. Aubrey Hutson, said that the team’s performance at the Games this year will certainly be the most memorable in his career. “It wasn’t something that when I took up presidency four years ago that I ever thought that we would have gotten this far, this short. But through a lot of hard work and dedication from our coaches and executive members of the AAG we have been able to turn out the best performance we have had in the 46 years in the history of the CARIFTA Games. All of our athletes did well. All of them would have contributed toward the success of this team even those who didn’t make it on this trip because they would have provided worthy competition for these athletes to excel and to get to the level that they are,” he said.

The team brought back eight medals on behalf of Guyana: four gold, one silver and three bronze medals. But among these stellar performances, it was 19 year old, Mr. Compton Caesar who won the men’s 100 meter race, which was a first for the country since the Games’ beginning in 1972. Mr. Caesar said that he was overwhelmed by the response and the support given by the Guyanese people following his performance and that he intends to further his career in track and field. “I feel great making Guyana proud… I like sports a lot. I have been running from when I was a little boy coming up, so I will make this my career,” he said.

Ms. Claudrice McKoy, who won a gold medal in the Under-18 3000 meter race and a bronze in the Girls’ Under-18 1500 meter race said that she is proud to be part of the team, which made such an impression at the Games this year. “Sport helps you helps you to be humble and helps you to go out there and put your best foot forward in athletics and academics and as you get older you can get a scholarship and can improve in other areas,” she said.