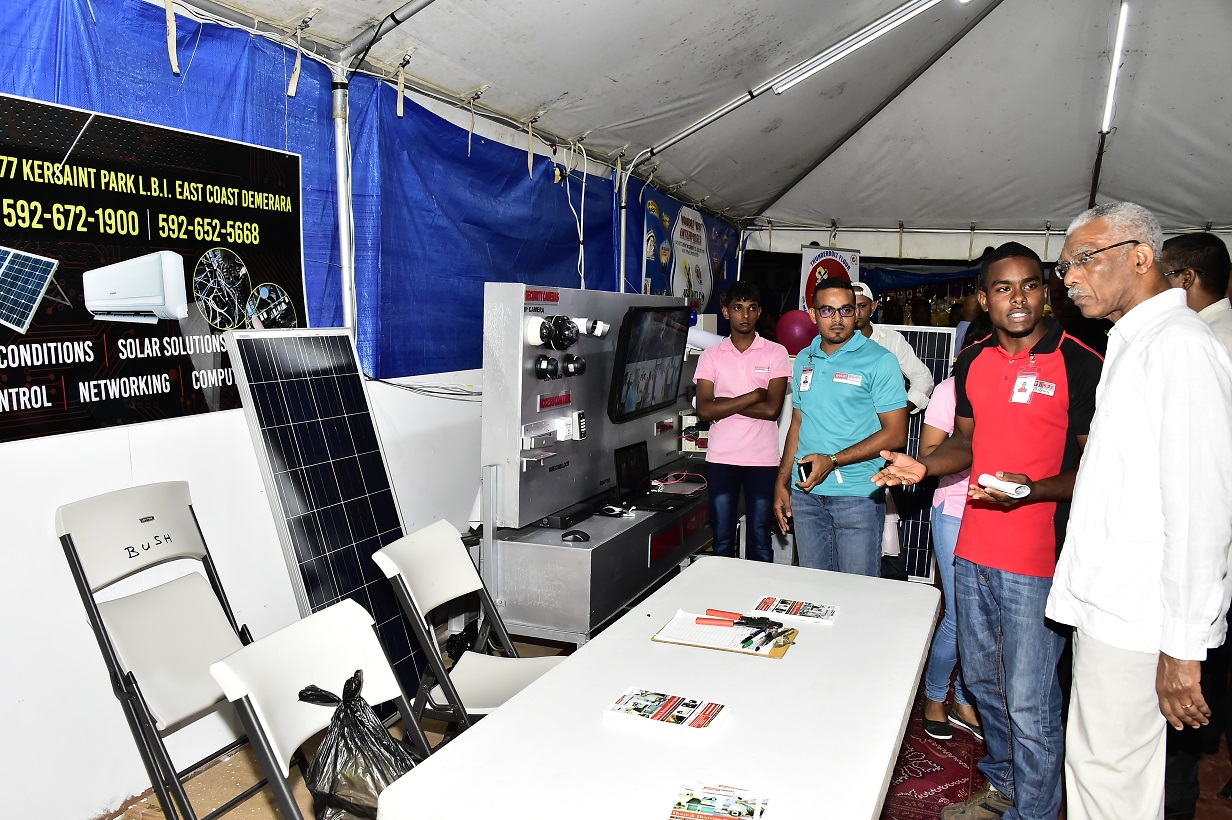 Georgetown, Guyana – (April 15, 2017) President David Granger, this evening, confirmed that the Blairmont Sugar Estate is among those that will likely be preserved even as Government looks to ensure that the industry lowers the cost of production in order to produce sugar that is competitive on the world market. The Head of State was at the time delivering the feature address at the opening ceremony of the Mahaica-Berbice (Region Five) Chamber of Industry and Commerce’s Expo and Trade Fair at the Bath Settlement Community Ground, West Coast Berbice, where he also called on the Regional Administration, the Neighbourhood Democratic Councils, members of the business community and civil society to work together with the Central Government to ensure that the challenges to the Region’s further development are solved.

Noting that Region Five as established itself as a bastion of Guyana’s food security, President Granger emphasised the importance of heeding the trade fair’s call through its theme to “Build a diversified economy” as well as ensuring traditional sectors are maintained through lower cost of production. “We have to produce our commodities more cheaply. Otherwise, we will not be able to compete, whoever is in the Government… We want to save the sugar industry but it must be efficient and competitive… We are not working to destroy the industry. We are working to develop the industry and the industry has been contracting. Some countries like Trinidad and Tobago, Barbados, St. Kitts and Nevis, Jamaica, Belize have seen their industries contract. Some have disappeared altogether because the cost of production was too high. Guyana is trying to preserve its industry. That is why there will be a Blairmont and that is why there is going to be an Albion and we will preserve as many of our plantations and estates as possible. Uitvlugt will remain but we have to deal with the problems of cost,” he said.

President of the Chamber, Mr. Imran Saccoor acknowledged that the sugar industry, which he described as the economic backbone of the Region and by extension Guyana, in its current state, is a “threat to our national treasury”. However, he commended the Government for preserving the Blairmont Estate, which is the single largest employer in the Region.

Regional Chairman, Mr. Vickchand Ramphal also pointed to the challenges in the sugar industry, as well as a number of other challenges affecting farmers. He said, “Mr. President many of our residents and farmers of Region Five have heeded to your call to produce more and to develop cottage industries. However, they have been faced with many challenges such as climate change, increase in prices of agricultural equipment and machinery, increase in land rental and drainage and irrigation fees and in some instances their lands are being taken away. Echoing the President’s repeated calls for all branches of Government to work together, the Chairman said that solving the economic and social problems of the Region is only possible if policy makers work together in a sober political atmosphere.

President David Granger seized on this point and called on all elected officials to forget party loyalty in the execution of their duties and focus on the development of the Region and the country for all Guyanese. He declared that all stakeholders must work together to ensure the development and implementation of a Regional Economic Action Plan (REAP). This plan, the Head of State said, should be built on the pillars of an economy that is export oriented, buttressed by renewable energy generation and expansion based on economic diversification.

The President said, however, that its success depends on all arms of Government working together with the business community and civil society to come up with a plan that will work for the Region.

“In months to come, I look forward to seeing the RDC [Regional Democratic Councils] and NDCs working together with the Ministry of Communities and working with the NGOs [Non-Governmental Organisations] to draft this REAP. We cannot go forward without a plan and we can’t go forward without speaking to each other and working together. It requires an inclusive and consultative approach. The Region must collaborate. This is not a PPP [People’s Progressive Party] region or a PNC [People’s National Congress] region. This is a West Berbice region… Once we take that oath in front of the President, we drop our political affiliation and think about our regional commitment. When I was sworn in as President of this country on the May 16, 2015, I said I’d be President for all Guyana… I go wherever Guyanese are and in this Region, wherever residents of West Berbice are, they must receive the attention and support of the regional administration and wherever the regions are the Ministry of Communities and Central Government must deal with them so that entire country is improved,” he said. 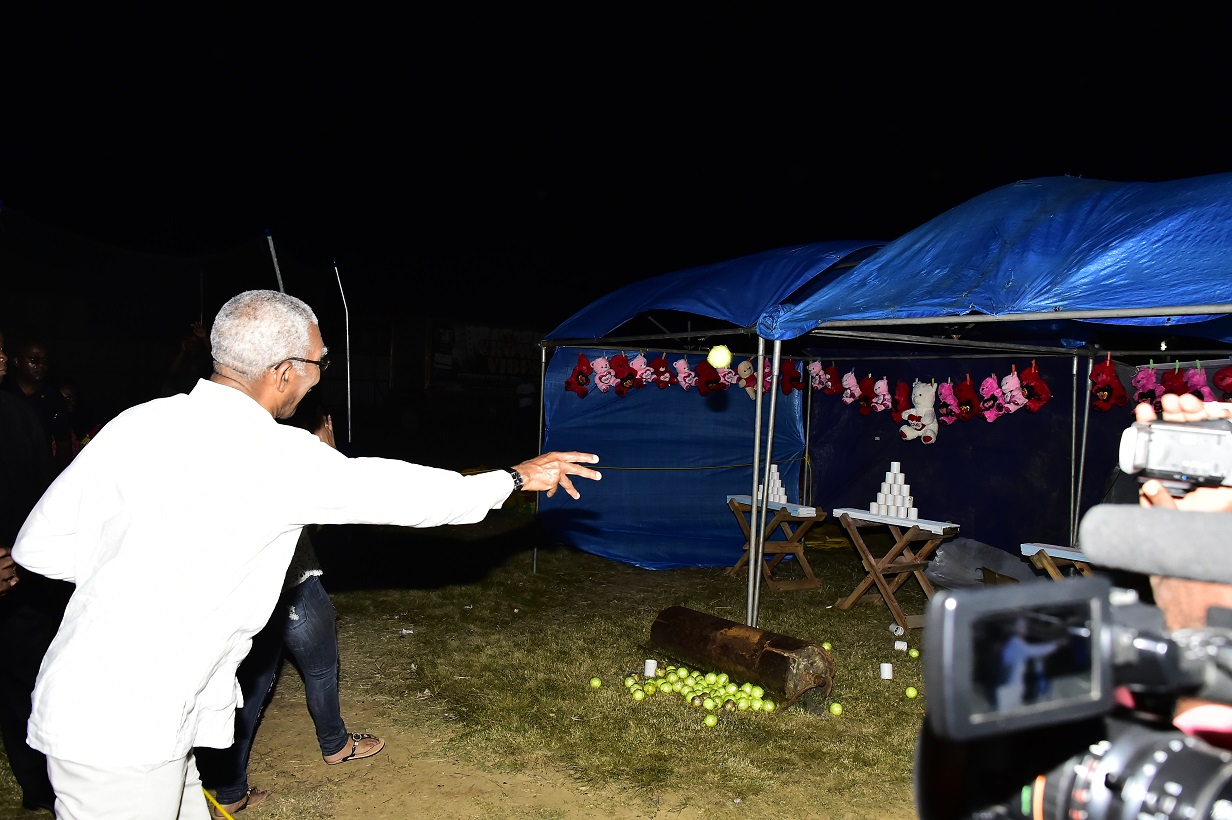 Region Five boasts an area of 324,000 hectares under cash-crop cultivation, 42,000 hectares under paddy and 1,600 hectares under coconut cultivation, with large herds of cattle, goats and pigs and sheep. With its agrarian infrastructure President Granger said its culture of husbandry is second to none anywhere in the country. He said that the region is well poised to lead the way as hub for food security in the Caribbean Community (CARICOM). “This Region is an agricultural powerhouse. It produced nearly 247,296 tonnes of rice last year, accounting for 46 percent of national production; it produced 28 million coconuts, nearly 1/3 of total national production; it produced 74.7 million kilograms of poultry; 1.6 million kilograms of beef; 281, 000 kilograms of pork; 60,000 kilograms of mutton; 44 million litres of milk; 1,68 metric tonnes of fish and shrimp. No President could ignore such massive production, and let me make it clear, I am here to augment that production. To help you to produce more. And anything that is good for West Berbice is good for Guyana,” the Head of State said.

Mr. Saccoor supported the call for an export oriented economy, that takes advantage of technological advancements to improve cost of production. Referencing reports of increased yields in paddy production of up to 40 percent due to the incorporation of spraying and sowing of paddy using air crafts, he said, “We would want to encourage our farmers to look to see how they can advance technologically in farming. When you advance technologically and invent new initiatives, you end up yielding better results.” He also called for support from Government for training in marketing and the provision of access to packaging plants so that producers in the Region can be able to reach international markets with their produce. He also welcomed plans for the expansion of a dairy industry in the Region by the Ministry of Agriculture. The Chamber President also commended the reduction in serious crime over the last months during his speech.

Following the official opening of the exposition, President Granger visited the stalls and interacted with the residents of the region. Booths included furniture production, solar energy services, craft, farm produce and supporting products and services as well as agro-processing.