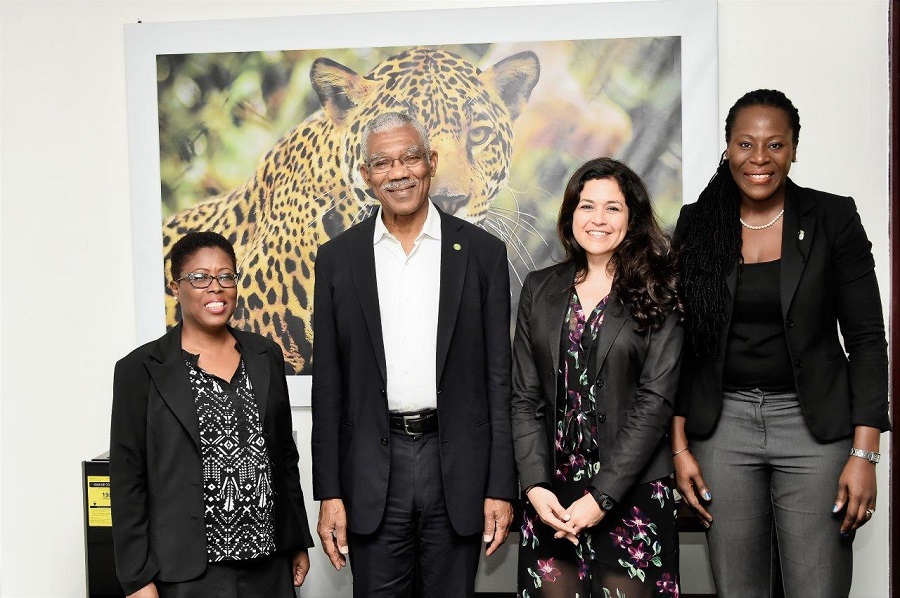 Georgetown, Guyana – (April 13, 2017) President David Granger, today, met with Conservation Biologist from the Field Museum of Chicago, Dr. Leslie de Souza, Ph.D., who made a presentation to the Head of State and his team on scientific research that she has been conducting in Guyana’s Hinterland over the past 13 years. Dr. de Souza also spoke on the Rupununi’s vast potential and supported the administration’s commitment to the setting up of protected areas in that region. The President welcomed Dr. de Souza’s presentation and highlighted the importance of scientific research that can be used to guide policy making when it comes to Guyana’s environment.

He said that the Rupununi is an essential component to Guyana’s transition to a ‘green’ state, and welcomed partnerships with bodies such as the Field Museum of Chicago to help to generate more information about Guyana’s biodiversity. “We value your contribution. We need to understand more about not only the landscape and terrain but the actual biodiversity and various flora and fauna. So it would be good to build a more enduring relationship for the flow of information,” the President said. Additionally, the he said that the potential of the Rupununi goes hand in hand with that of Iwokrama, which sits at the heart of the Guiana Shield.

President Granger poses with( from left) Commissioner (ag) of the Protected Areas Commission, Ms. Denise Fraser, Conservation Biologist from the Field Museum of Chicago, Dr. Leslie de Souza, Ph.D. and Head of the Department of the Environment, Ms. Ndibi Schwiers. Asked about Guyana’s potential with regard to its biodiversity, Dr. de Souza said “Guyana is sitting on riches…the natural resources here are incredible”.

While the Rupununi is a key part of the Government’s ‘green’ agenda, the President said that the push for the creation of protected areas in Guyana targets all of the country’s ecological zones. “We have a concept of ensuring that every one of our 10 Regions has a dedicated protected area because of the uniqueness in their biodiversity… Every Region has a unique ecological zone, which we feel should be protected… The Rupununi is unique… It is larger than Costa Rica, but is the least developed in terms of infrastructure but equally we have to think of other forms of development with regard to infrastructure,” he said.

The President also spoke of his intention to create a biodiversity institute, which would allow researchers to generate the type of scientific data that would allow Government to make educated decisions with regard to the management of the environment. “We realise that it is a unique zone and this is something we need to pass on to future generations. I have put a lot of emphasis on establishing a world class biodiversity institute so that we can accumulate specimen and researchers can go there and do their research there so that we can know better what we have and it will guide our protected areas policy. So we need help in determining what we have so we know which areas to protect,” the President said.

Dr. de Souza’s presentation included findings from various studies conducted on the country’s aquatic life as well as other types of flora and fauna and the importance of protecting Guyana’s natural patrimony. She said that the Rupununi alone has over 800 species of birds, 200 species of mammals, 500 species of fish and 2000 species of plants, many of which are unique to Guyana. “Guyana is sitting on riches… The natural resources here are incredible, the pristine forest and the natural resources throughout the hinterland; this is the land of many waters a lot of fresh water and biodiversity. Guyana is part of the Guyana Shield, which has some of the largest tracks of intact forests on the globe so Guyana has a potential role to play in mitigating climate change for the whole planet and that’s remarkable to think about the potential that this country has to impact the whole planet based on its natural resources,” Dr. de Souza said. 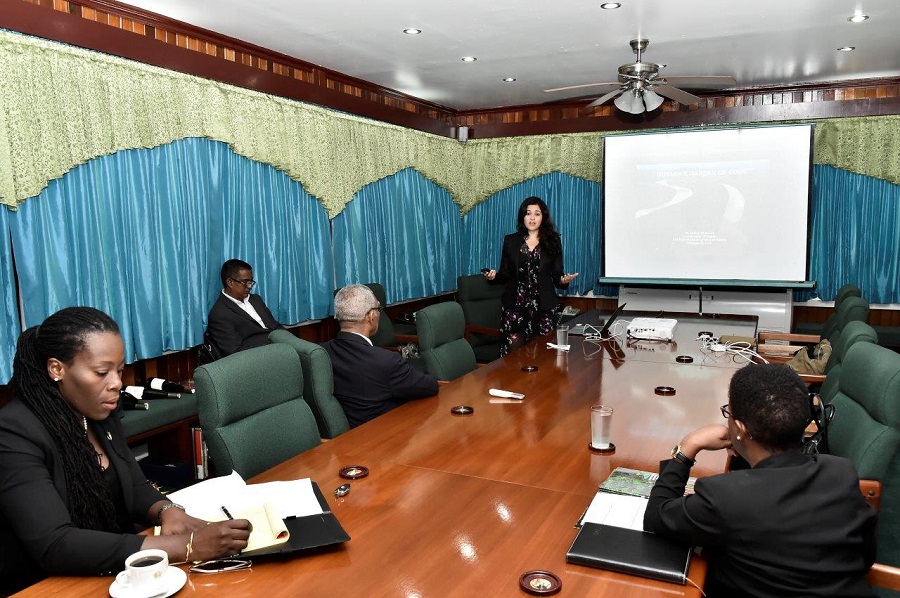 President Granger poses with( from left) Commissioner (ag) of the Protected Areas Commission, Ms. Denise Fraser, Conservation Biologist from the Field Museum of Chicago, Dr. Leslie de Souza, Ph.D. and Head of the Department of the Environment, Ms. Ndibi Schwiers. Asked about Guyana’s potential with regard to its biodiversity, Dr. de Souza said “Guyana is sitting on riches…the natural resources here are incredible”.

The Conservation Biologist said that it is also important that Guyanese are made aware of their responsibility in the protection of these natural resources. “We all have an obligation. We have a responsibility to be stewards of our land and to realise that it’s not necessarily going to be here forever and we have a role to play in protecting our resources. If you want to have fresh water you need healthy forests. If you want to have a future for your next generation those are important aspects that you need to protect. Every single person can play a role in protecting the resources you have here,” she said.

Head of the Department of the Environment, Ms. Ndibi Schwiers and Commissioner (ag) of the Protected Areas Commission, Ms. Denise Fraser were also present at the meeting and welcomed Dr. de Souza’s presentation. Ms. Schwiers expressed her intention to work with Dr. de Souza on future research projects that would aid in furthering the Department’s mandate. “We are glad you were able to do research in the Rupununi… I, therefore, see lots of merit in continuing and furthering a relationship with you and with the Museum in carrying forward work of this magnitude in other parts of the country as we are looking to have protected areas in every region,” she said.

Ms. Foster echoed Ms. Schwiers’ sentiments, while stating that the collection of data is critical to understanding the true potential of Guyana’s biodiversity. “The Protected Areas Commission has been looking at potential areas for extension of the national protected areas system in each region… We don’t have biological data of these places so we would be looking for help in terms of doing biological assessments for lots of areas so we need assessment in those potential areas,” she said. She added, though, that consultation with all stakeholders in these areas is also a very important aspect of the process and that this would be something that would be done as well.