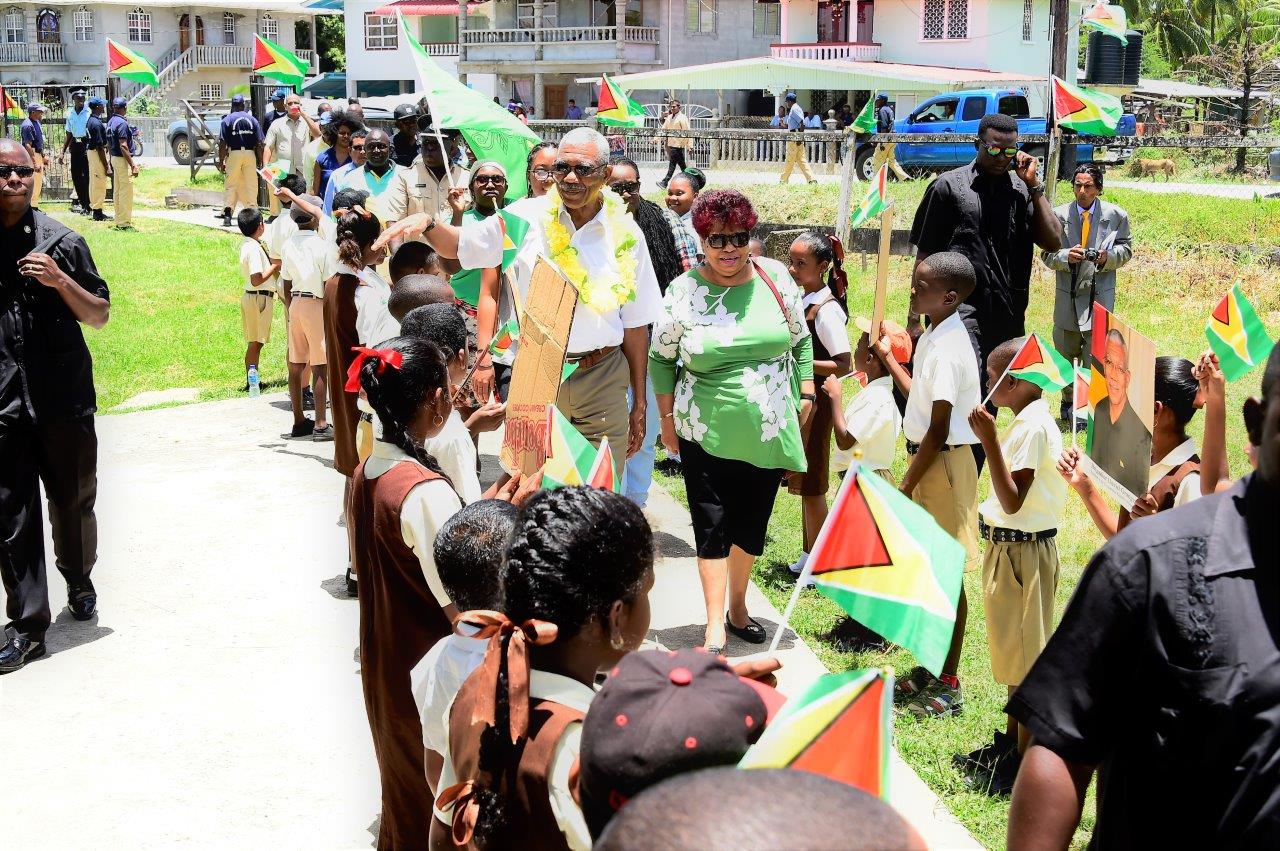 Georgetown, Guyana – (April 9, 2017) President David Granger, today, visited the residents and children of the islands of Leguan and Wakenaam, Essequibo Islands-West Demerara (Region Three) as part of his annual kite distribution exercise and assured the residents that Government will ensure equal access to infrastructural development, education and employment to ultimately provide the good life for all Guyanese.

Beginning today’s visits at Leguan, the Head of State told residents gathered at the Leguan Secondary School that the visit is more than just about the distribution of kites. “This visit is about having a good life on this island of Leguan. This Government is committed to giving you the people of Leguan the good life. We do not believe that your roads should be inferior, [that] your transportation should be inferior, that your schools should be inferior. That is why we are spending millions of dollars on sea defence and improving transportation on this island so that you must be able to move about, so that you must be able to get your paddy from the farms. You must be able to sell your produce in other parts of the island, the Region and the country. And we will continue working for you because every Guyanese is entitled to equal access to education, equal access to employment, equal access to good infrastructure,” the President said.

The President made similar comments while in Arthurville, Wakenaam, stating that “Since the Government has come in just under 19 months, we have done a lot. We have helped to secure the sea defences of this island. We have helped to improve the road network and the schools, particularly the nursery schools. We will continue working with the people of Wakenaam because we believe that all Guyanese should have equal access to the public services. We don’t discriminate between what we give to people in the regions. We want all Guyanese to get the same benefits that we give to people in different parts of the country,” he said.

President David Granger and Minister of Social Protection, Ms. Amna Ally receive a warm welcome from the children at Wakenaam.

Some of the major infrastructural projects that have been completed in Leguan were highlighted by District Community Development Officer, Mr. Amjad Shaw, even as he welcomed the President to the island. These include $278 million in capital and maintenance work on the sea and river defences of the island, as well as millions of dollars spent on new roads, including an asphalt road leading to the plantain chip factory and the rehabilitation of schools and other projects. “Leguan is not left out of the development process. I can assure you that this caring APNU/AFC Government under the astute leadership of [President] David Arthur Granger will continue to provide the necessary finances to do development works and ultimately provide a better life for all Guyanese,” he said. In Wakenaam work has been done on the Arthurville Nursery School, new Home Economics and Industrial Science laboratories have been completed at the Wakenaam Secondary School and other works were done at the Wakenaam Hospital.

The President also reminded the residents of both islands of Guyana’s potential in the agricultural sector, stating that the islands of Leguan, Wakenaam and Hogg Island, combined, are bigger than the British Virgin Islands in the West Indies.

But despite the potential for ago-processing and industry, unemployment remains high. However, the President believes that if residents tap into the agricultural opportunities and use that potential to create self-employment they can contribute to the economic development of the region and ultimately the country. He encouraged the residents to use the produce available to them and to add value to meet the demand for such products in Guyana and the Caribbean. “You can produce enough to make a good living to be rich and to provide for your children and grandchildren. I’m not saying there is no unemployment. I am saying it is possible to get good employment if you grasp education and grasp the means of employing yourself,” he said. 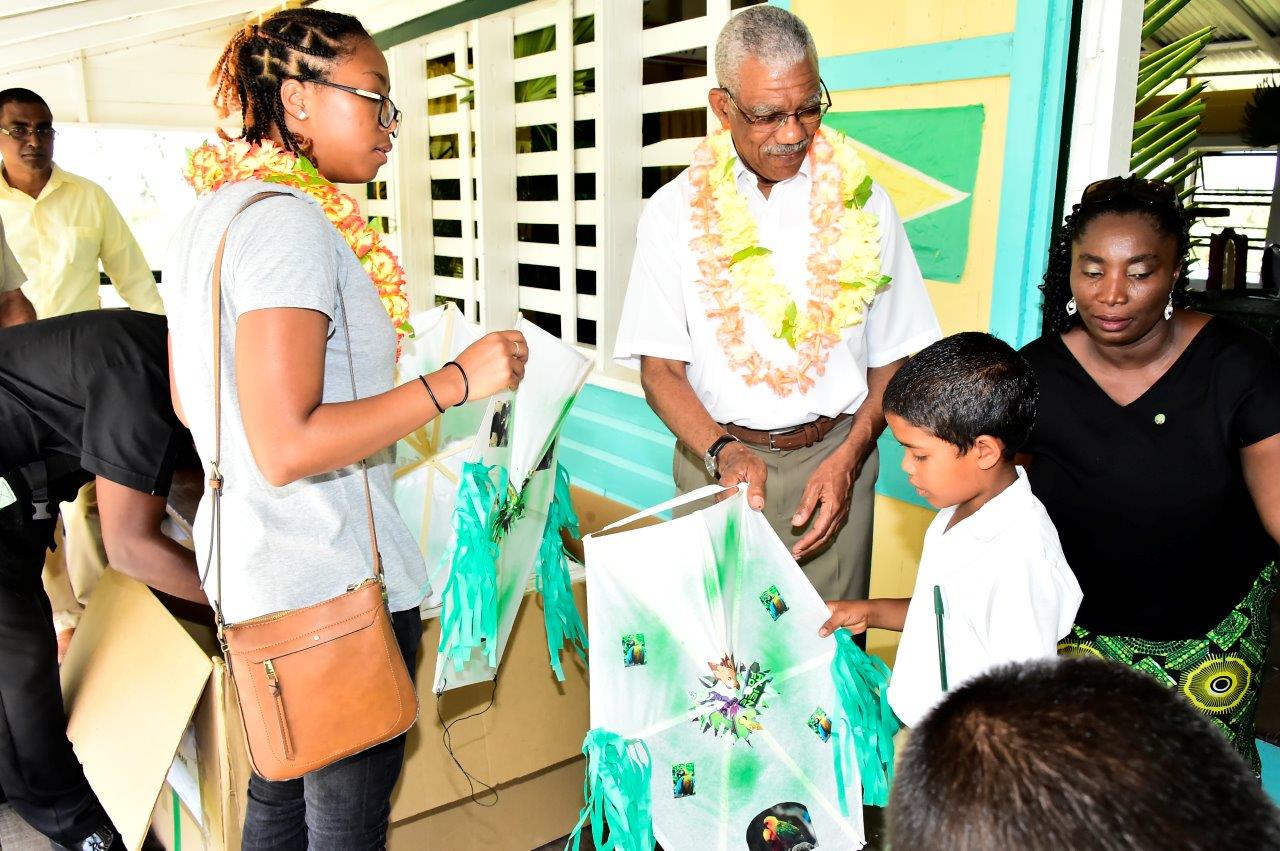 President David Granger is assisted by his grand daughter, Ms. Athena Gaskin as he distributes kites at Wakenaam

Newly appointed Deputy Regional Executive Officer (DREO) for Region Three, Ms. Jennifer Ferreira Dougal, in an invited comment, said that her plans for the region fall in conjunction with the President’s vision, particularly his push to ensure every child stays in school. She stated, too, that the Regional Administration has already begun programmes within the region to promote agro-processing. “The President said he would like to see this region produce agriculture that can feed the nation and I think we can do it. It is a challenge he has given us and with my help along with the REO I know we can do it in this region. When I was installed, during my first meeting with the staff I said to them I am here to serve the people of Guyana and what I am asking for us to do is work as a team and I think working as a team we can make this region a model region,” she said.

District Community Development Officer, Mr. Ganesh Mahipaul said that focus is also being placed on ensuring that the residents of the Region are trained in agro-processing. “Most of the people in Wakenaam and Leguan are technically oriented. They focus on block making, furniture, livestock rearing and so what we have done is to collaborate with the Ministry of Social Protection’s Board of Industrial Training so that they can do programmes on the island we can help to make these people entrepreneurs,” he said. Mr. Mahipaul also lauded the First Lady for her Self Reliance and Success in Business workshop, which was hosted in the Region which helped to empower female entrepreneurs. “The aim of the Regional Administration is to stay within the ambit of what the President wants for the country and that is a good life for all,” he said.

Speaking on equality and access to education, President Granger told residents of both communities that his administration believes that regardless of location, every Guyanese must see themselves as equal, and that the rest of the country, in turn, must see them as equals as well. “I don’t believe in any discrimination. I don’t believe that because people are living in rural areas or in the islands or in the hinterland they should be treated differently. We believe in equality and if people are to be equal, the gateway to equality must be education,” he said. As such, the Head of State reminded the residents that one of the reasons for the visit was to re-emphasise Government’s commitment to education. “Over and over again the Minister of Social Protection, the Minister of Education and other Ministers go from village to village, from community to community making sure that children can get to school. So being here today is part of confirming our faith in education. Without education you will not be able to enjoy the good life. Education first of all is the gateway to equality,” he said. 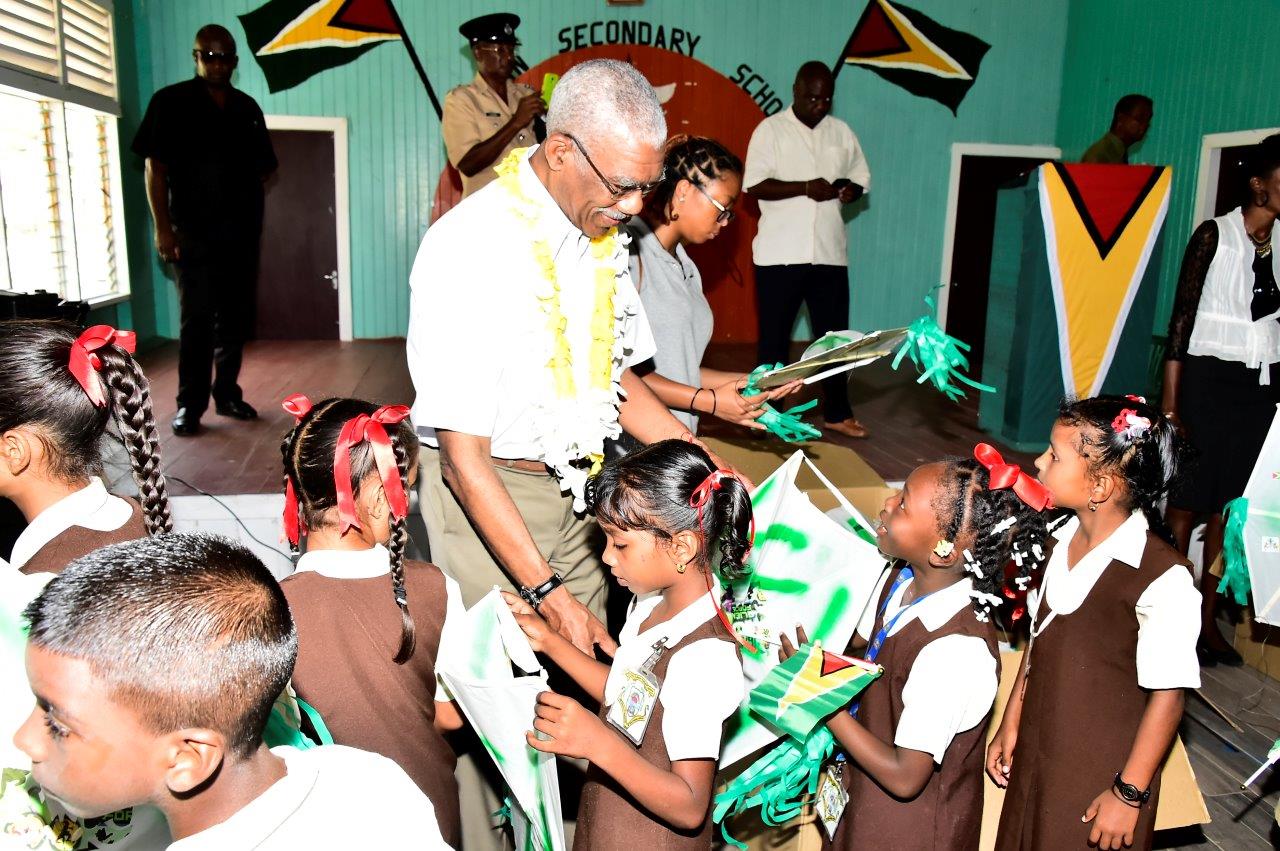 “We have been doing visits to communities to ensure that all our children, who are on our register are in school and we have major shake down exercises from time to time. So I think the Regional Education Department is doing a fantastic job in ensuring every child in our Region is in school. Of course there may be one or two who may slip through the net but I think the majority are in school. Even in the riverine areas, we are ensuring that through our visits and through reports from the contact persons there we have there, that our children are in school,” she said.

Turning his attention to energy, the President encouraged the residents to make use of alternative forms of energy to generate electricity. “Everything you need to work with is powered by energy. You can have cheaper energy; if you use wind power, if you use solar power and that wind and solar power will generate electricity and help you to do agro-processing; to produce your jams and jellies, to produce other things you need not only to live with but to sell,” the President said. 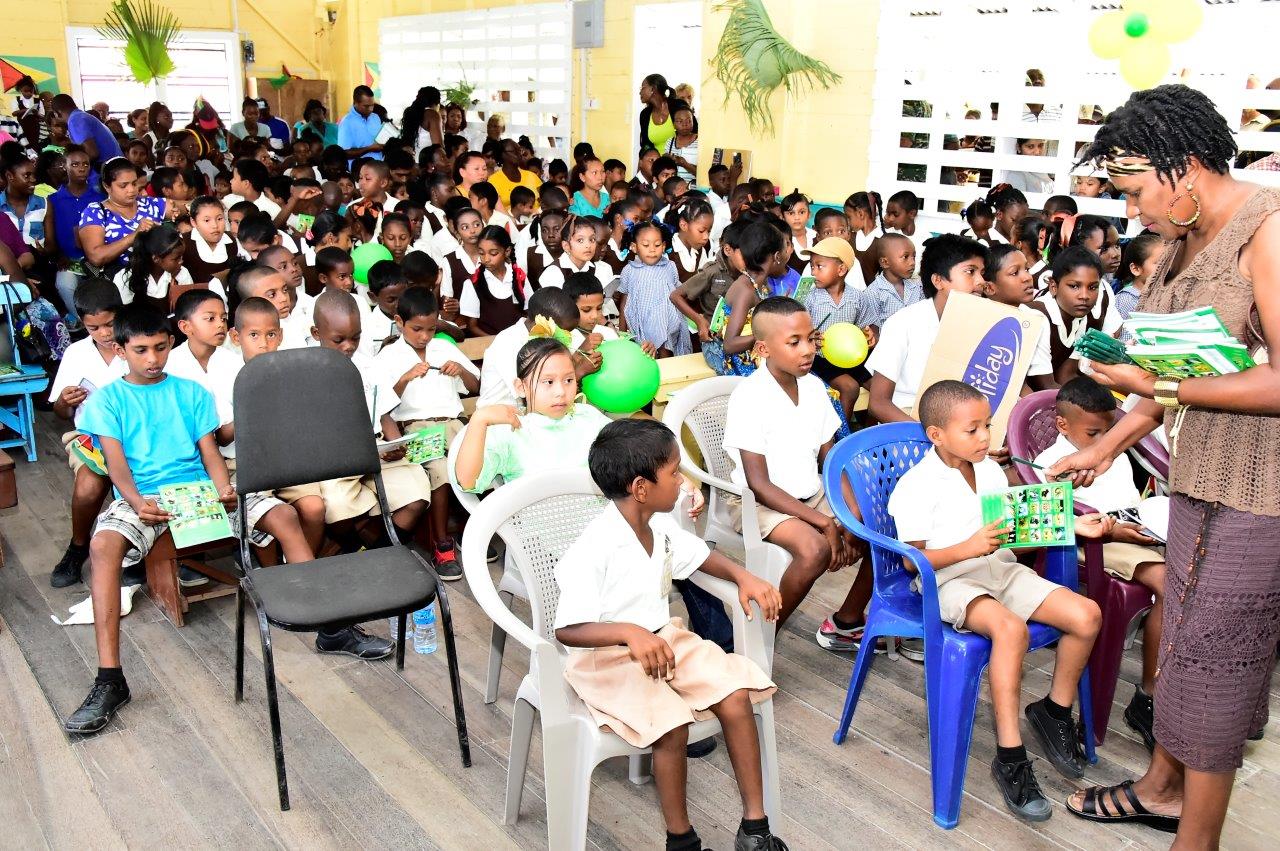 A teacher helps to distribute special exercise books, which have on their covers pictures of a number of animals that are indigenous to Guyana, often referred to as the ‘Giants of Guyana’.

President Granger said that he is happy to visit the children in Leguan and Wakenaam at this time of year as kite flying at Easter has become a uniquely Guyanese tradition and it is a good opportunity for people of all walks of life to come together and partake in the multicultural activity. “In Guyana, Easter is no longer regarded as purely a Christian festival… All Guyanese should come out and celebrate the flying of kites at this time of the year,” the President said.

In addition to the kites, the children were also presented with exercise books and pens. Minister of Social Protection, Ms. Amna Ally was also present at the event and assisted the President with distributing kites to the children at both locations.