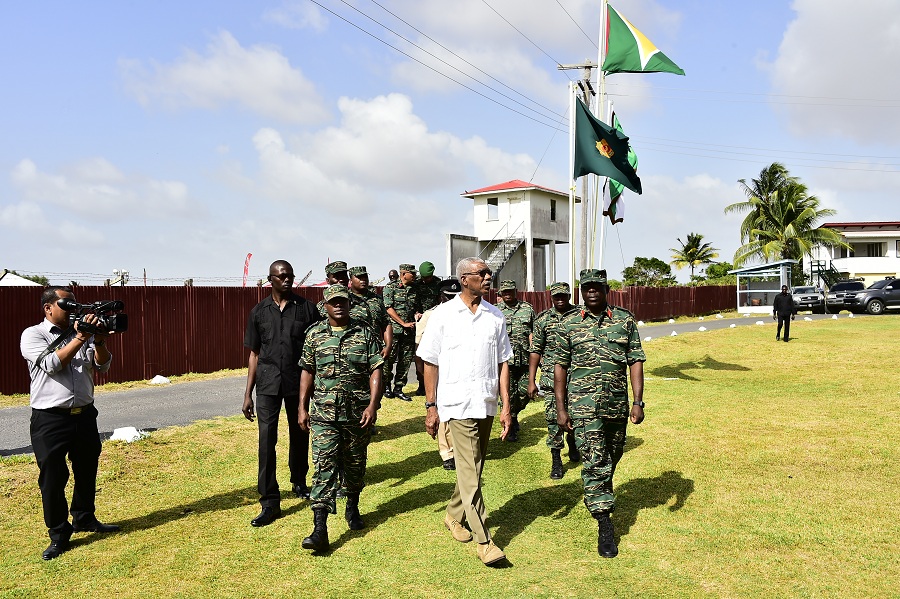 Georgetown, Guyana – (April 7, 2017) President David Granger, today, visited the Guyana Defence Force’s (GDF) Coastal Battalion Base in Anna Regina, Pomeroon-Supenaam (Region Two) to get a first-hand look at its state of readiness to conduct operations along the coast, in the Pomeroon River and in Indigenous communities such as Tapakuma and Mainstay/Whyaka. The President was accompanied by the Army’s Chief of Staff, Brigadier Patrick West.

While on the ground, the Commander-in-Chief was pleased by the Chief of Staff’s report assuring him that the Battalion has been carrying out its duties in accordance with its mandate and mission. He urged the ranks stationed at that location to go out to every single community and get acquainted with local leaders. “You have to continue to show your state of readiness and your preparedness to ensure national defence of our country,” the President said.

Apart from their own operations and patrols, the Battalion has also been involved in joint operations with the police and the President urged that they conduct training exercises with the Joint Services, from time to time, to strengthen the Region’s overall security mechanism.

Speaking of the donation of equipment that the GDF recently received from the People’s Liberation Army (PLA), President Granger explained that over the course of the next three years, the Army will be undergoing a process of transition, whereby emphasis will be placed heavily on scientific surveys and engineering.

“This means that we are opening the window of opportunities to soldiers, non-commissioned officers and officers who have an interest or background in engineering so that you transition into that field. The focus for the next three years will be to develop a strong, technical corps especially in the field of engineering,” the Head of State said.

Meanwhile, Brigadier West in his remarks said that, “I can say sir that the Battalion has performed well over the last year and I would like to conclude by saying that as we welcome you, the Battalion has satisfied its operational training and operational mandate in accordance with Force policy. The Coastal Battalion will achieve greater effectiveness once it is adequately resourced and receives further training in keeping with the Forces role. As I indicated, we are yet to build the third Company and I envisage that the third Company may have within it elements of anti-aircraft and engineering”. 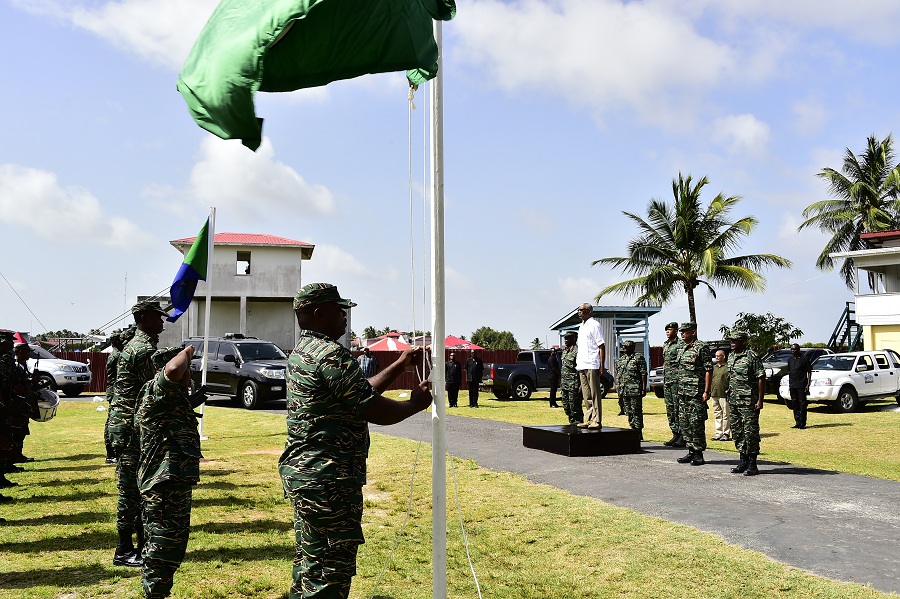 President David Granger taking the military salute upon his arrival at the Guyana Defence Force’s Coastal Battalion Base in Anna Regina.

The GDF’s Coastal Battalion Base was established as a Company in October 2009 and was subsequently upgraded to a Battalion in March 2011. Its main role is to conduct internal security operations or coastal and civil operations as is required.

A Battalion is made up of three Companies, one Base is located at Anna Regina and the other is on the Corentyne. The third will be built in 2018.