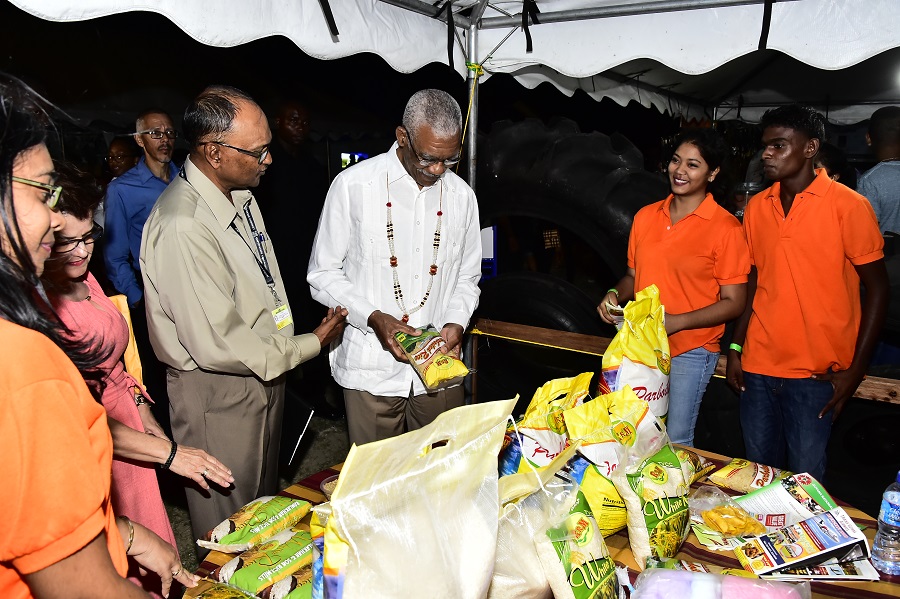 Georgetown, Guyana – (April 7, 2017) President David Granger, this evening, said that diversification, political cooperation and improved social cohesion are key to the economic development of Pomeroon-Supenaan (Region Two). The President made these comments at the Essequibo Agro and Trade Exposition, which was opened this evening under the theme ‘Essequibo means Business’ at Anna Regina Ground.

Before officially declaring the two-day event open, the President told those gathered that Region Two is the leading agricultural region of the country, which contributes significantly to Guyana’s food security and that while there are still many challenges, there is great potential for economic development to take place there. Additionally, President Granger called on the Regional Administration, the Anna Regina Town Council and other stakeholders to partner with Central government to work towards economic development. He also called for strengthened efforts to further improve social cohesion and to ensure that the goals of the Region are achieved.

President David Granger takes a closer look at some of the products on sale and displayed at the Essequibo Agro and Trade Expo, along with President of the Essequibo Chamber of Commerce, Mr. Deleep Singh

Noting that the Region has historically done well with the production of primary agricultural products, President Granger said its economy can be made more resilient through diversification into areas such such as agro-processing and manufacturing. “This country cannot be tied eternally to producing raw materials. At the national level, we face challenges with raw sugar, bauxite, timber and gold. Unless you start adding value; unless you start refining, unless you start manufacturing, we will not be able to overcome the problems of poverty or make that breakthrough into prosperity,” he said.

The Head of State said that this diversification requires a multi-stakeholder fashioned Regional Action Plan, which is based on four pillars: Institutions, Investment, Infrastructure and Information and Communications Technology (ICT).

Speaking on the importance of strong institutions, the President said that all of Government, the Central, Regional and Municipal must function in tandem with each other, along with civil society bodies, including the Essequibo Chamber of Commerce. “Let us help the Essequibo Chamber of Commerce; let us help civil society to be strong and to represent the interests of their members and their various constituencies… let civil society and Government produce this plan so that, year by year, we see greater production coming out of Region Two. The Central Government is prepared as always to work with the region and the municipalities,” he said. 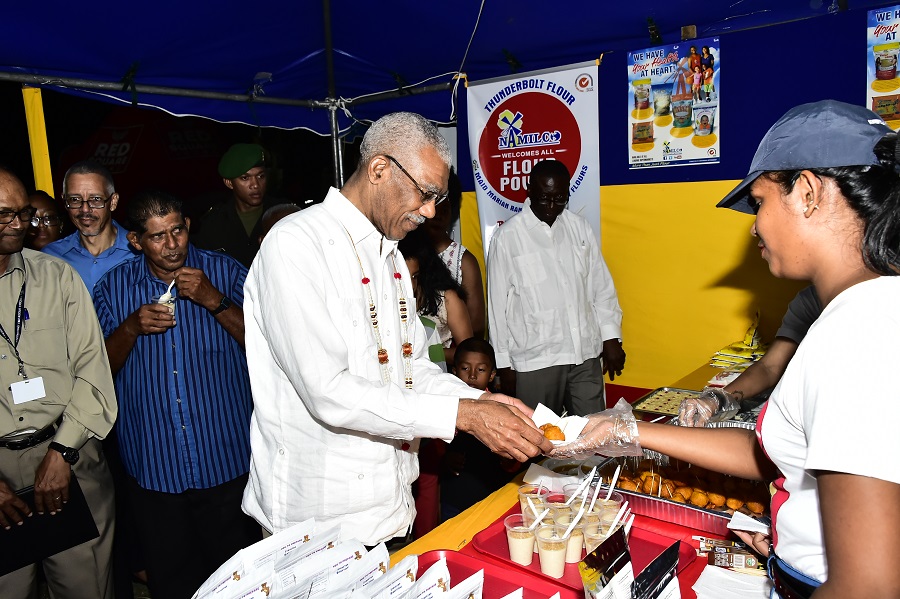 Turning his attention to investment, President Granger said that Government is focused on creating an environment that attracts foreign direct investment, as well as develops the potential of small business enterprises. “There must be fresh investment; there must be new investment in Region Two. It can only come from making sure that this Region is safe and secure and produces enough commodities to attract people in the diaspora and other countries to come here and invest,” the Head of State emphasised. President Granger also informed that the Ministry of Business is committed to developing cottage industries through the use of micro-financing and other forms of support to ensure a thriving culture of entrepreneurship that can drive the Region’s economy forward.

The Head of State added that a priority area for regional development is the improvement of infrastructure. He said that the construction of bridges, highways and access to transportation can ensure that Region Two with its scenic rivers and lakes can become a sough after tourist destination. “This region cannot be developed fully and quickly unless we improve infrastructure… Infrastructure, if not properly developed, will continue to obstruct the growth of this region… this region can only be developed if there are more boats and better roads to provide access to people,” he said.

Where ICT is concerned, the President said that it is a necessary commodity in this age. “No business can develop without ICT. You have to know what your market demands, where to get the best raw materials… Without the internet you are operating blindly. The internet will help you to get information and to disseminate information about your own products,” he said. 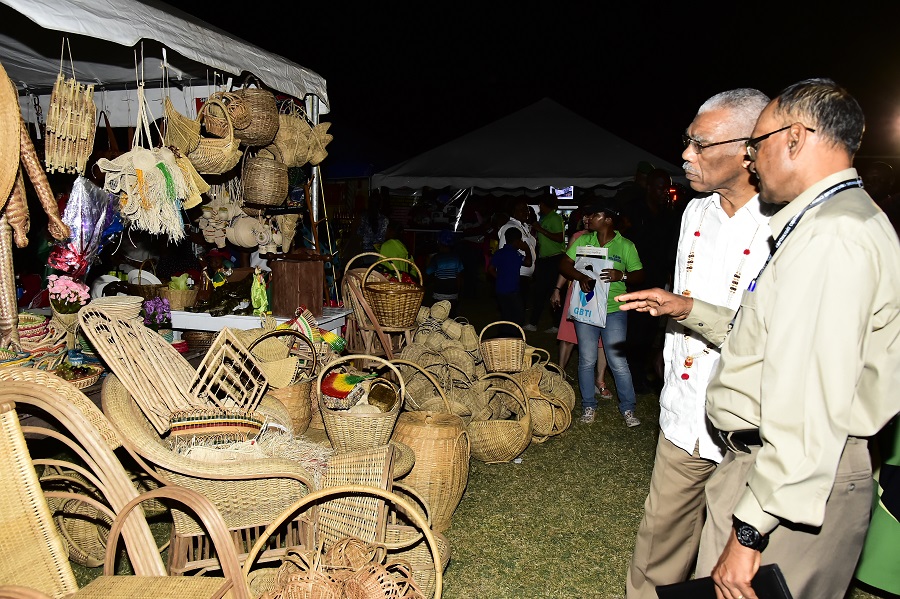 President of the Essequibo Chamber of Commerce, Mr. Deleep Singh discussing craft work on display at the Essequibo Agro and Trade Expo with President David Granger, who declared the event open

Commending the Essequibo Chamber of Commerce for organising the event, the President said, “You are making a statement to the other regions about your capability and productivity. I urge this region to follow up on this Exposition. It is not a one-off event, but it should be a showcase of your production and productivity. It should show the rest of Guyana and the rest of the Caribbean what you are capable of doing.”

Meanwhile, Minister of Business, Mr. Dominic Gaskin commended the organisers of the event, saying that this is one of several business expositions that have been held all across the country. “These events provide a much needed platform for towns and regions to showcase their talents and capabilities and for bringing businesses into contact with each other and the public. They create good opportunities for the public and private sector to network with each other and with the people of this country. They also complement the efforts of the Ministry [of Business] in the development and promotion of local products and services,” he said. Minister Gaskin also noted that through his work with the region, he has the distinct impression that the business community, as well as the regional bodies are ready to scale up value added production for the export market and noted that Government is ready to support them.

The Minister also suggested other ways in which the region can indulge in diversification to drive economic development and listed value added production and tourism as some of those avenues. With regard to tourism, the Minister said that last year over 235,000 persons visited Guyana, making it a record year for the country’s tourism industry. As such, he said that the Region could use its natural beauty and even tap into avenues such as agro-tourism, which can encourage investments. 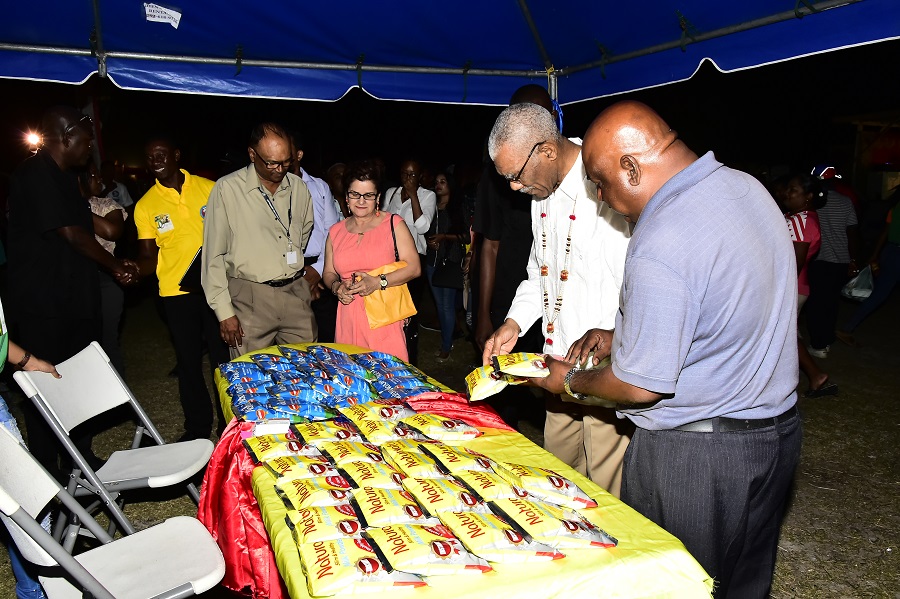 President David Granger takes a closer look at a milk powder brand, which is packaged in Guyana.

Regional Chairman, Mr. Devanand Ramdatt highlighted the Regional Administration’s support for both regional and national development. “All of us in this region, we are aware of the struggles we are facing with the region’s economy… We must collectively work with our Government so that urgent attention can be given to the struggling rice industry… Over the years Region Two would have contributed significantly to our country’s development and we want to have continued progress… We will continue to engage the Essequibo Chamber of Commerce because partnership and stakeholder participation are critical to the development process,” he said.

Regional Executive Officer of Region Two, Mr. Rupert Hopkinson highlighted the benefit of the Exposition and its contribution to regional development. “When you contribute to events like this, you create a chain of spending that will help to contribute to your region… I congratulate the Essequibo Chamber of Commerce because they are creating an essential part of the development process. This expo signals a continuation of serious development in this Region,” he said.

President of the Essequibo Chamber of Commerce, Mr. Deleep Singh, echoed the President’s sentiments and pushed Government and private sector collaboration as a key aspect of the region’s development. “The Essequibo Chamber of Commerce has been, over the last year, engaging Government and Non-Governmental Organisations [NGOs] in pursuing partnerships with focus on the development of a ‘green’ economy and aligning ourselves to the national development strategy. Over the next year, we set ourselves the task of creating a better business environment, bringing down barriers and making it easier to do business. We will continue this process of consultation more aggressively,” he said. 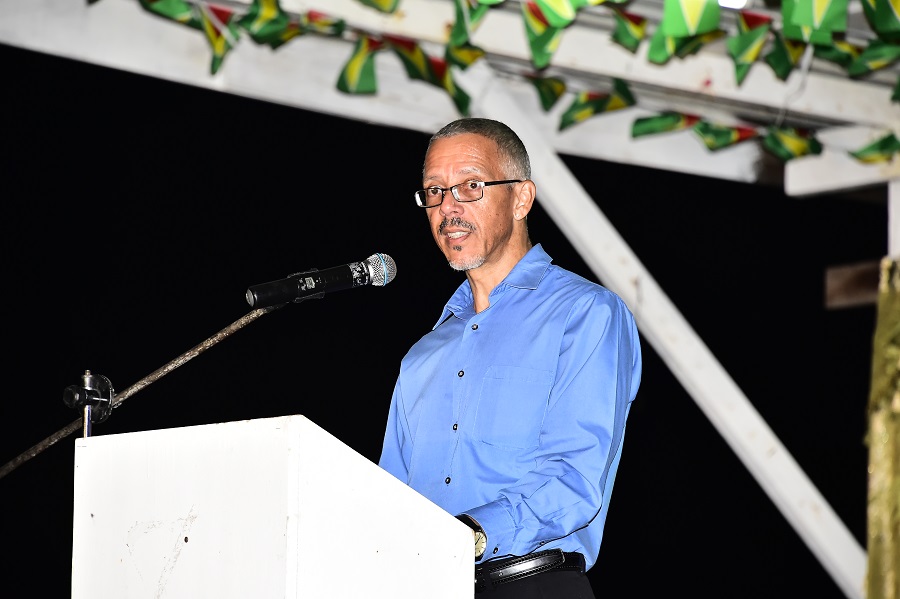 Minister Dominic Gaskin told those gathered that his Ministry stands ready to support diversification efforts in the Region.

Mr. Ishack Basir, former Member of Parliament, and a resident of Essequibo spoke of the agricultural potential of the region. He said that the region holds vast land space for agricultural activities such as cattle rearing, and the cultivation of a wide variety of crops. However, he too pushed for the diversification of the industry, stating that while there is sufficient land, there needs to be a new approach to agriculture.

The two-day event features a value added produce, including rice and other agro-processed products. In addition, the Guyana Marketing Corporation and the Guyana Office for Investment were among the supporting Government agencies that set up stalls at the event. Minister of Social Protection, Ms. Amna Ally was also present at the event. 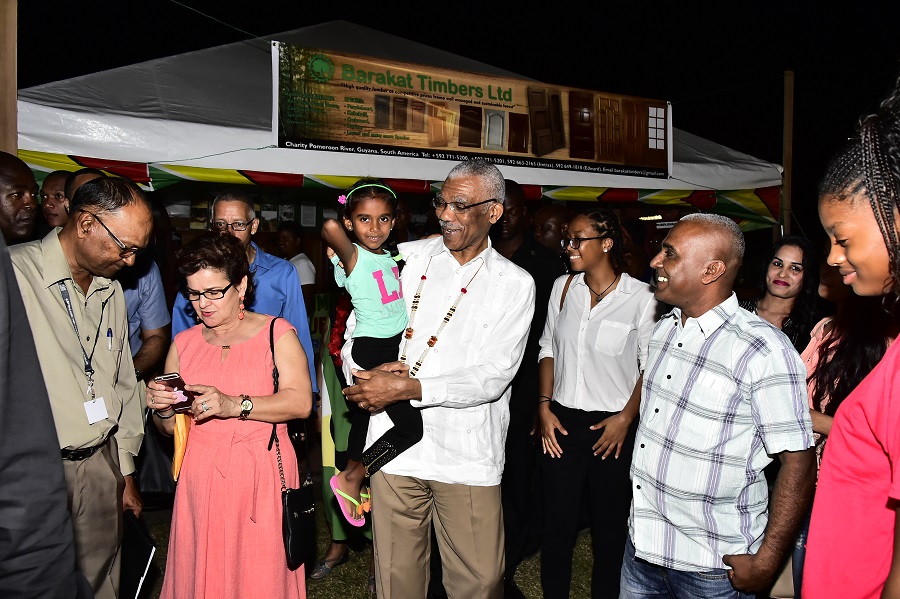 This little girl strikes a pose for the camera with President David Granger.