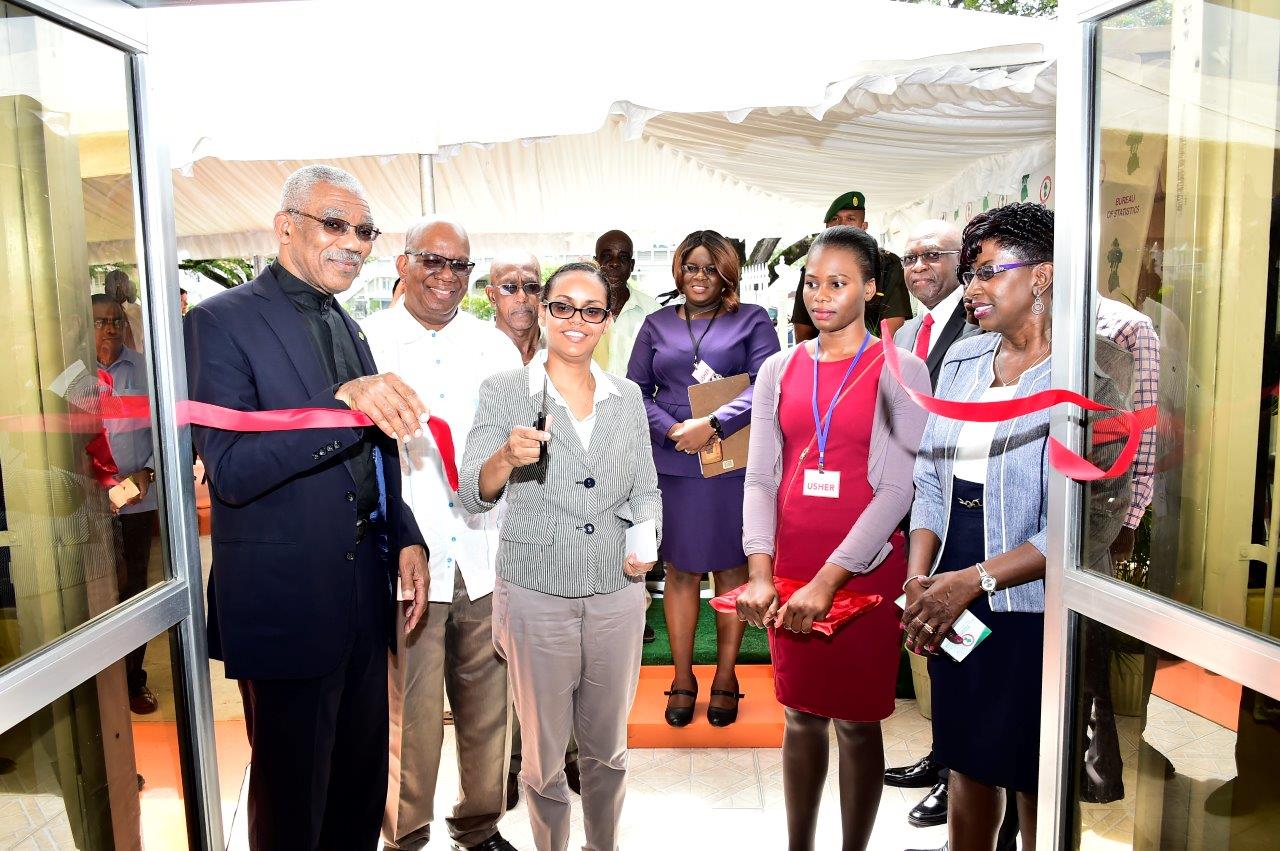 Georgetown, Guyana – (April 7, 2017) President David Granger said that good governance requires good statistics, which is vital in the process of decision-making and policy formulation. As such, he said that his Government is committed to preserving the culture that emphasises the importance of the collection, compilation, dissemination, storage and retrieval of accurate, reliable, relevant and timely statistics at all levels. The Head of State made these remarks at the commissioning of the new Office of the Bureau of Statistics on Main Street at the former ‘Customs House’ building, which was refurbished at a cost of some $160M.

The President pointed out that Government agencies, private sector bodies, civil society and international organisations need accurate, reliable and timely statistics to be able to make informed decisions that will benefit the citizenry.

“The availability of statistics is important for local and foreign investments since investors need information to evaluate risks and identify viable business and economic opportunities. The Bureau’s work will assist international organisations and allow them to identify challenges and to design relevant responses to those challenges…The Bureau is charged, therefore, with the production of statistics, which will remove anecdotal and emotive influences from the decision-making process,” President Granger said.

President David Granger assisted Chairperson of the Board of Directors of the Bureau, Ms. Natasha Gaskin-Peters in the ceremonial ribbon-cutting to officially commission the facility.

According to the Head of State, statistics take the guess-work out of decision-making and provides empirical information that can help to validate or invalidate policy measures. It also helps the Government to determine as well as monitor the social and economic impacts of its policies and social programmes. “Statistics enable citizens to judge the success of government decisions and policies. It is the basis of the informed opinions on which they can hold government accountable. Statistics are therefore essential to government in the delivery of services to citizens,” the President said.

He also outlined three areas in which his Government is working to improve governance and efficiency, these are: infrastructure, institutional strengthening and information services and in all of these areas, the Bureau of Statistics has a critical role to play. Better, more modern infrastructure he said, will improve the volume and value of the statistics produced.

In terms of institutional strengthening, the President called on the Bureau to spread the data collection culture throughout the Public Service. He also informed that the Government plans to establish planning units in each of the 15 ministries. “We are committed to statistical institutional strengthening by providing more training and by recruiting staff to work in the Bureau and in the statistical units in ministries, agencies, commissions, corporations and departments,” he said. 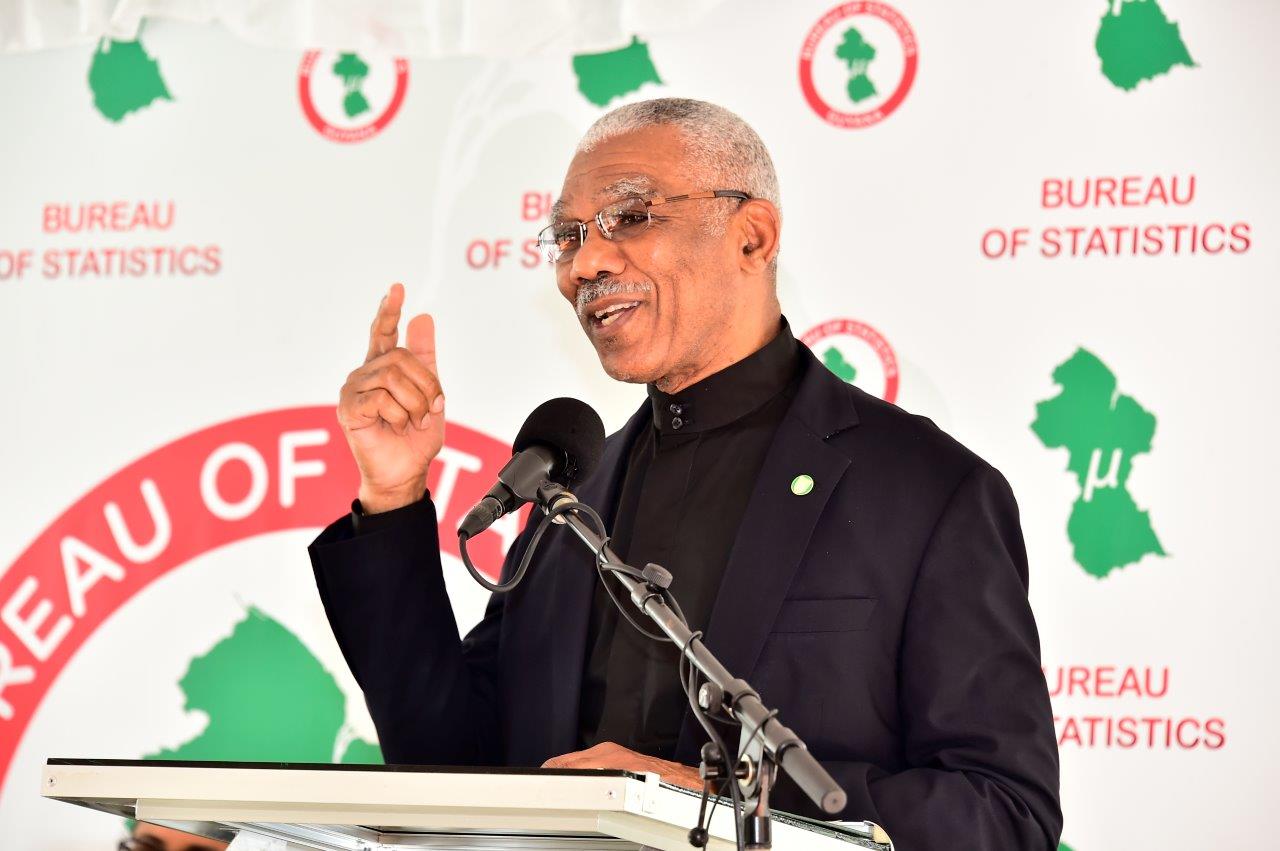 In this regard, staff members of the Bureau have already began building capacity with assistance from Statistics Canada, that country’s central statistical office. A module of training in data analysis has already been delivered in the last month.

As it relates to information services, President Granger said that the Bureau must generate data that will allow public service managers to assess the performance of their agencies, staff and the services provided. He noted that data collection on services provided by the Government is one way to ensure that these services are efficient and efficacious.

Meanwhile, Finance Minister, Mr. Winston Jordan, said that shortly after he took over leadership of the Finance Ministry in May 2015, he was approached by Chief Statistician, Mr. Lennox Benjamin who explained that the Bureau was spread across three different locations and that such an arrangement did not make efficient operations. “He said that he had made numerous representations to previous administrations all of which fell on deaf ears. Though everyone recognised the importance of the Bureau, this was not reflected in their treatment of the institution. In short, it was time that the Bureau had a permanent home,” Minister Jordan said. 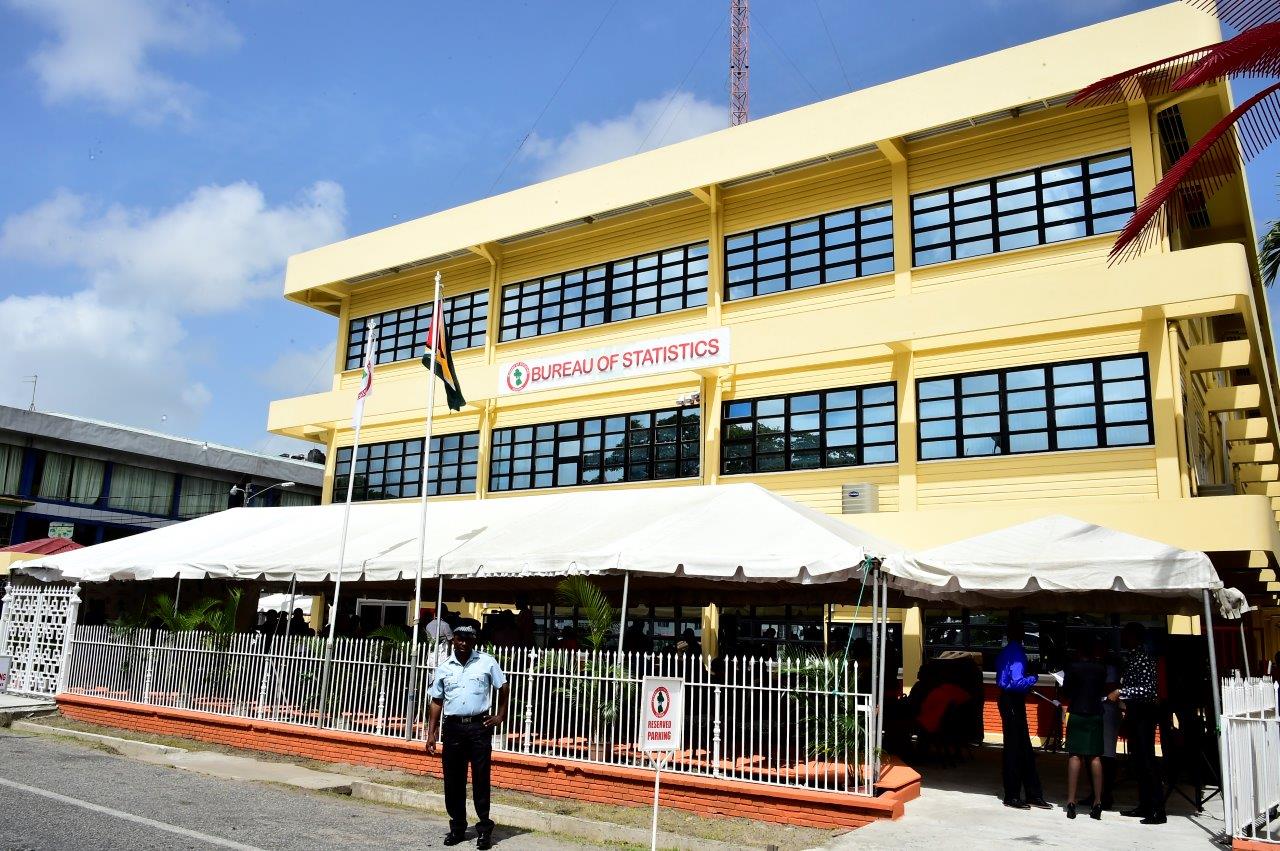 The Bureau of Statistics headquarters on Main Street

He also said that as the Minister under whose purview management of the economy falls, he is well-aware of the fact that the Government’s capability and capacity for conducting good policies, largely depends on the availability of proper statistics.

“Statistical data represent a key input in macroeconomic policy-making; they are the indicators of the performance of the economy; they are [the] basis for the adoption of current decisions and they underline the projections for future developments. Therefore, their quality, impartiality and timeliness are crucial for the successful functioning of the economy of any country…So the modernisation and transformation of the Bureau is essential if we are to meet development objectives,” Minister Jordan said.

“It was therefore a real pleasant surprise to receive a Cabinet decision dated May 2015, notifying the decision of Government to assign these premises, the former Customs House, to the Bureau as its permanent headquarters,” he said.

According to the Statistics Act, the Bureau has the responsibility, “to collect, compile, analyse, abstract and publish statistical information relating to the social, agriculture, mining, commercial, industrial and general activities of the inhabitants of Guyana.”

Over the course of the next two years, the Bureau will be conducting a labour force survey and a household budget survey to provide key data on employment and other socio-economic factors such as consumption and poverty. The Bureau will also establish a Poverty Unit in order to make poverty data accessible on a more frequent basis.