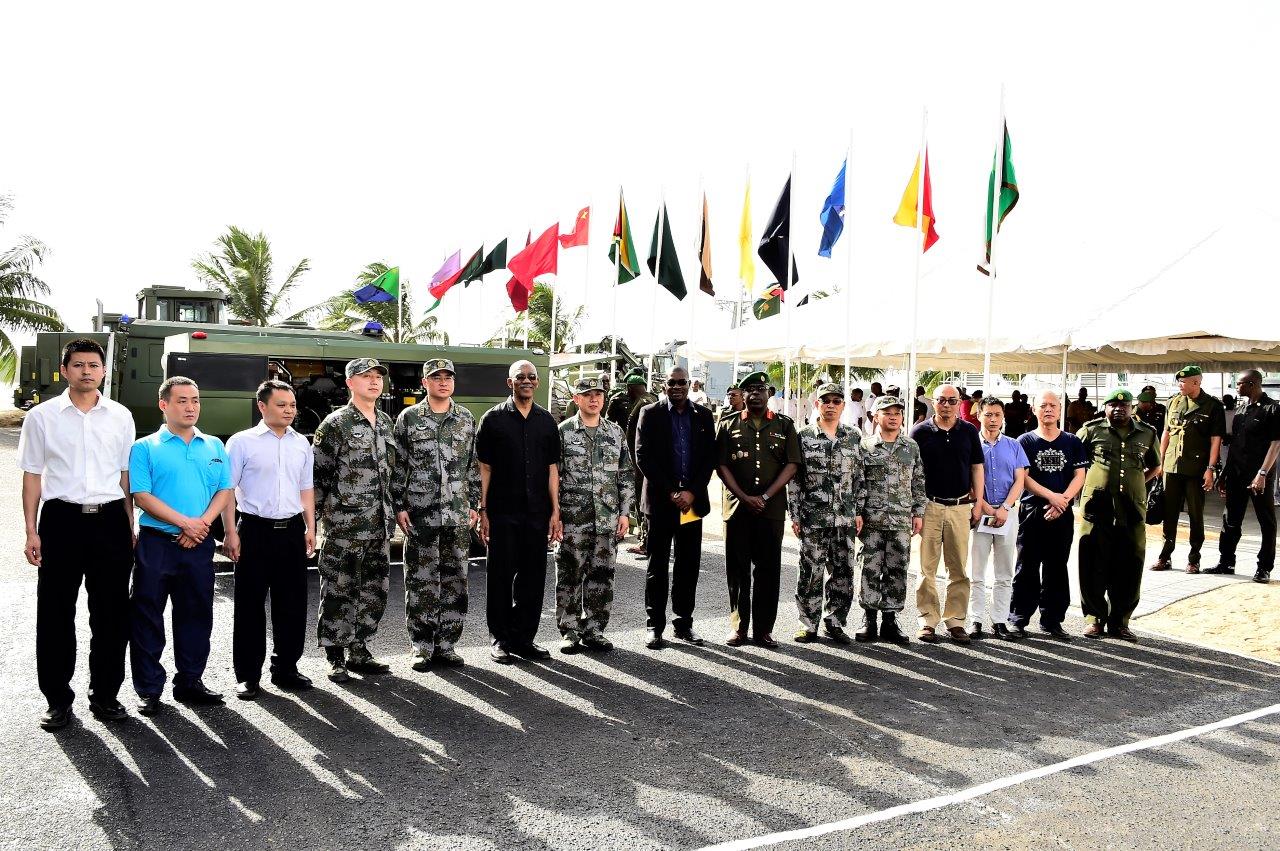 Georgetown, Guyana – (April 3, 2017) The Guyana Defence Force’s (GDF) mandate to support the infrastructural development of the country was boosted with a donation of equipment from the Chinese People’s Liberation Army (PLA). The items were officially handed over today during a brief ceremony at the Coast Guard Ship Hinds, Ruimveldt, where President David Granger said that this investment by the People’s Republic of China is an important one as it further cements relations between the two countries. The donation consisted of 31 pieces of equipment including patrol boats, bulldozers, one excavator, water tankers, fuel tankers, tipper trucks, off-road ambulances and several other vehicles.

The President said that infrastructural development is a top national priority and that the GDF’s technical corps must be strengthened to allow it to contribute effectively to national development and to execute its mandate of protecting the territory and preventing transnational crime. “National defence is inseparable from national development. Public infrastructure enables and ensures public security by guaranteeing safety for our citizens, by providing assurance to investors and visitors and contributing to an enabling environment for investment,” the President said.

He said that transportation and communication infrastructure will open opportunities for investment and promote the development of the productive sectors, while also facilitating easier access to inputs and markets.

Moreover, the President said that improved infrastructure will also provide benefits to the GDF itself, allowing the Force to effectively respond to medical emergencies and natural disasters throughout the country. The President said that the Air Corps, Engineer Corps, Signal Corps and Coast Guard of the GDF need to be recapitalised in order to more effectively control Guyana’s airspace, land space, sea space and rivers and provide reliable communications in any weather and terrain. “The Guyana Defence Board, recognising the need to enhance defence and development took the decision, in 2015, to recapitalise the Force’s technical corps,” he said.

This revitalisation included the enhancement of the Air Corps, Engineer Corps, Signal Corps and Coast Guard to carry out its duties, including continuous surveillance, over the country’s air, land and maritime borders, the provision of support for search and rescue services to persons in distress, the restoration of defence and public infrastructure and ensuring reliable communication throughout the country in any weather or terrain.

As such, the President said that the vessels are a welcome addition to the Force’s riverine fleet, while the other equipment will improve the capability of the Engineer Corps. “We look forward to the continued support of the People’s Liberation Army and the People’s Republic of China, especially in strengthening the technical capability of the Defence Force. This ceremony is a tangible expression of the commitment of our two republics to international peace and security. This ceremony is an expression of the fraternal ties between the Guyana Defence Force and the People’s Liberation Army. This ceremony is a symbol of the friendship between Guyana and China,” the President said. 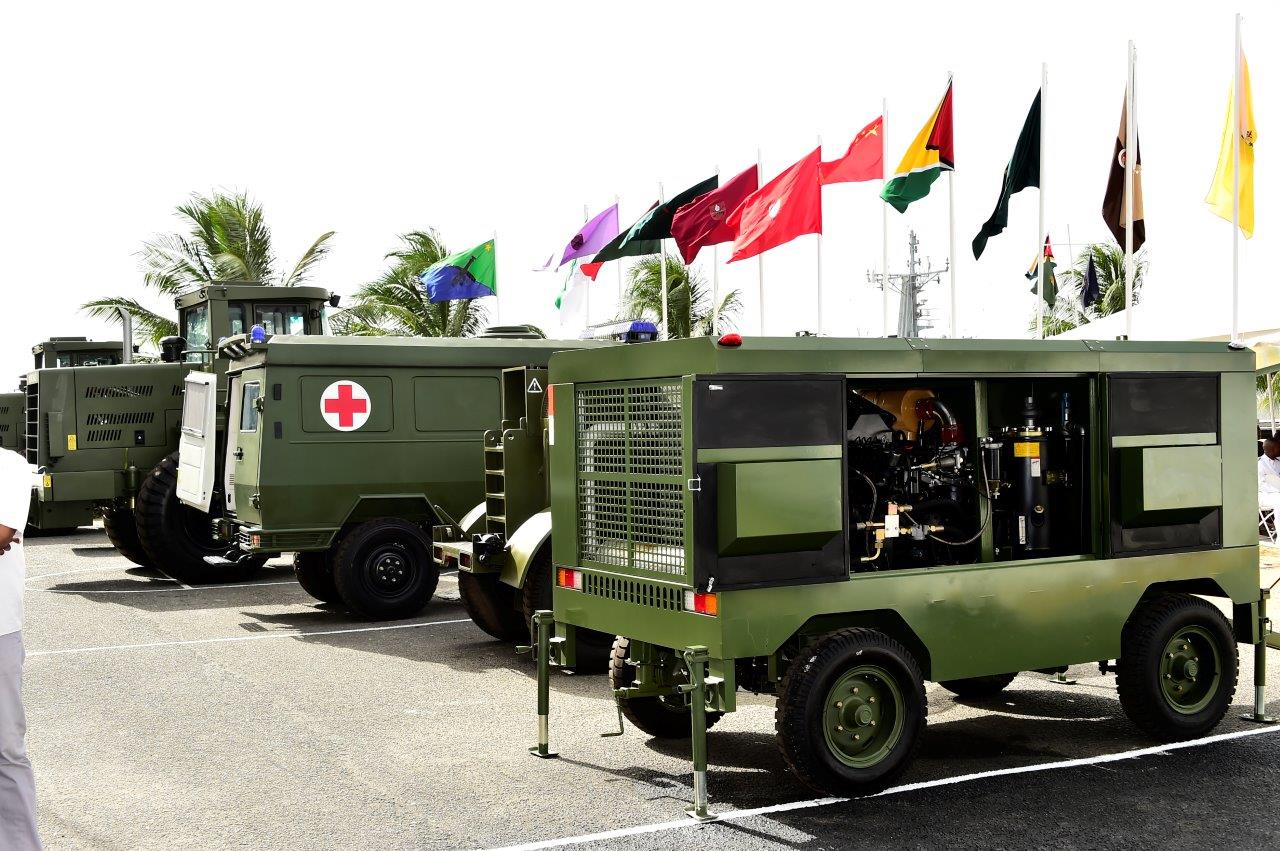 The Chinese People’s Liberation Army made a donation of 31 pieces of military equipment to the GDF including several vehicles that can contribute to the infrastructural development of the country.

Chief of Staff of the GDF, Brigadier Patrick West, during brief remarks, echoed the President’s sentiments, stating that the donation is indeed appropriate as it will aid in the total transformation of the GDF into a body that effectively oversees total national events. ”The GDF sees this donation as extremely significant since the type of equipment included in this catchment includes machinery that can positively impact our third role for national development such as road and bridge building. It is notable that this equipment will, to a large measure, have the total effect of helping the Engineering Battalion and the Specialist Battalion of the Guyana People’s Militia which is our reserve force. And it helps to satisfy the vision of effective transformation for total national events,” he said.

Ambassador of the People’s Republic of China to Guyana, Mr. Cui Jianchun, said that the Government of China highly values the relationship between the two countries and that the People’s Republic of China stands ready to further broaden and deepen the exchange and cooperation between the military forces of the two country. “For many years, the PLA has been providing military aid and training to the GDF, which is beneficial to the development of the GDF and the friendship between the two sides. This handing over of military equipment at this time is once again a significant testimony of the friendly and practical cooperation between the PLA and the GDF. I will spare no effort to push forward the relationship between our two armies and bring Chine-Guyana relations to new heights” he said. 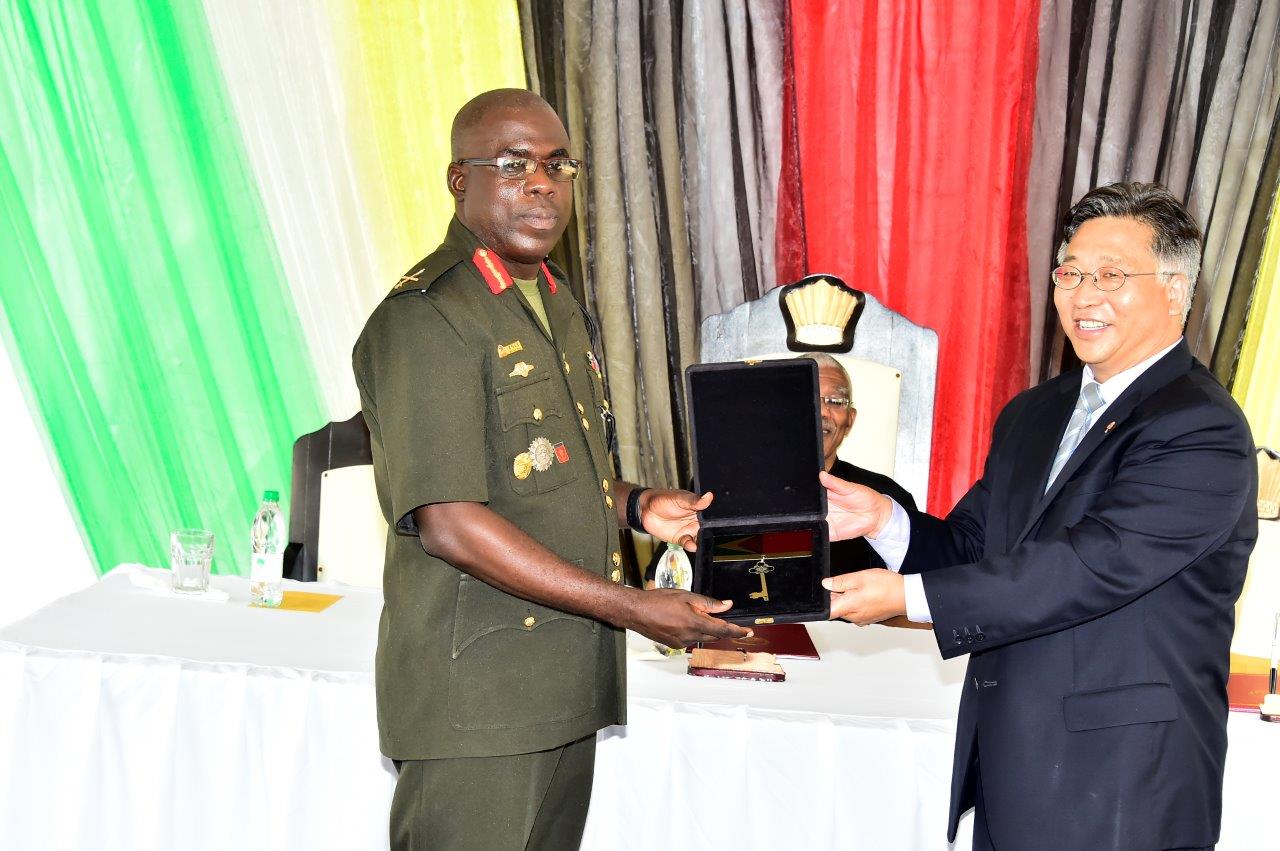 Ambassador of the People’s Republic of China to Guyana, Mr. Cui Jianchun performs a ceremonial handing over of keys to Chief of Staff of the GDF, Brigadier Patrick West during the ceremony

Minister of Public Infrastructure, Mr. David Patterson, who was also present at the ceremony, said that Government is very grateful for the donation. The Minister said that there are GDF engineers and equipment currently seconded to the Ministry, which helps the Ministry to pioneer new roads and new frontiers and that opening up these new frontiers are in keeping with government’s vision to create linkages to the hinterland. “With this equipment we will use them to push roads into the interior locations in our coast of connecting the coast to the hinterland,” he said.

Apart from the donation, the PLA has also brought in a team of technical and military officers, who will provide training to GDF troops on the operation of the equipment. The team is headed by Senior Colonels Zeng Xianglin and Lu Ying who were present at the ceremony. Inspector General, Col. Nazrul Hussain and other senior GDF officers were also present at the handing over ceremony. 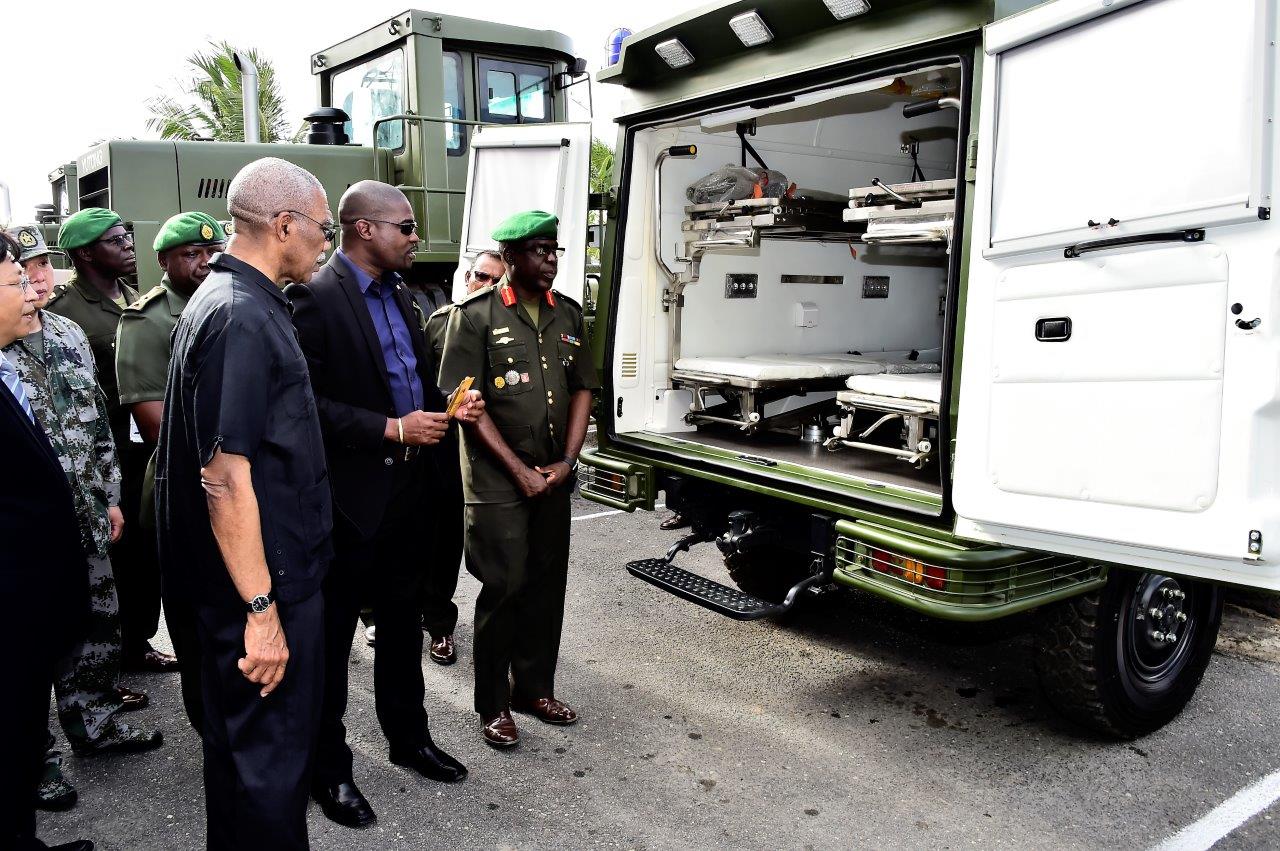 President David Granger, Minister of Infrastructure, Mr. David Patterson and Chief of Staff of the GDF, Brigadier Patrick West inspect the inside of one of the off-road ambulances donated by the Chinese People’s Liberation Army.