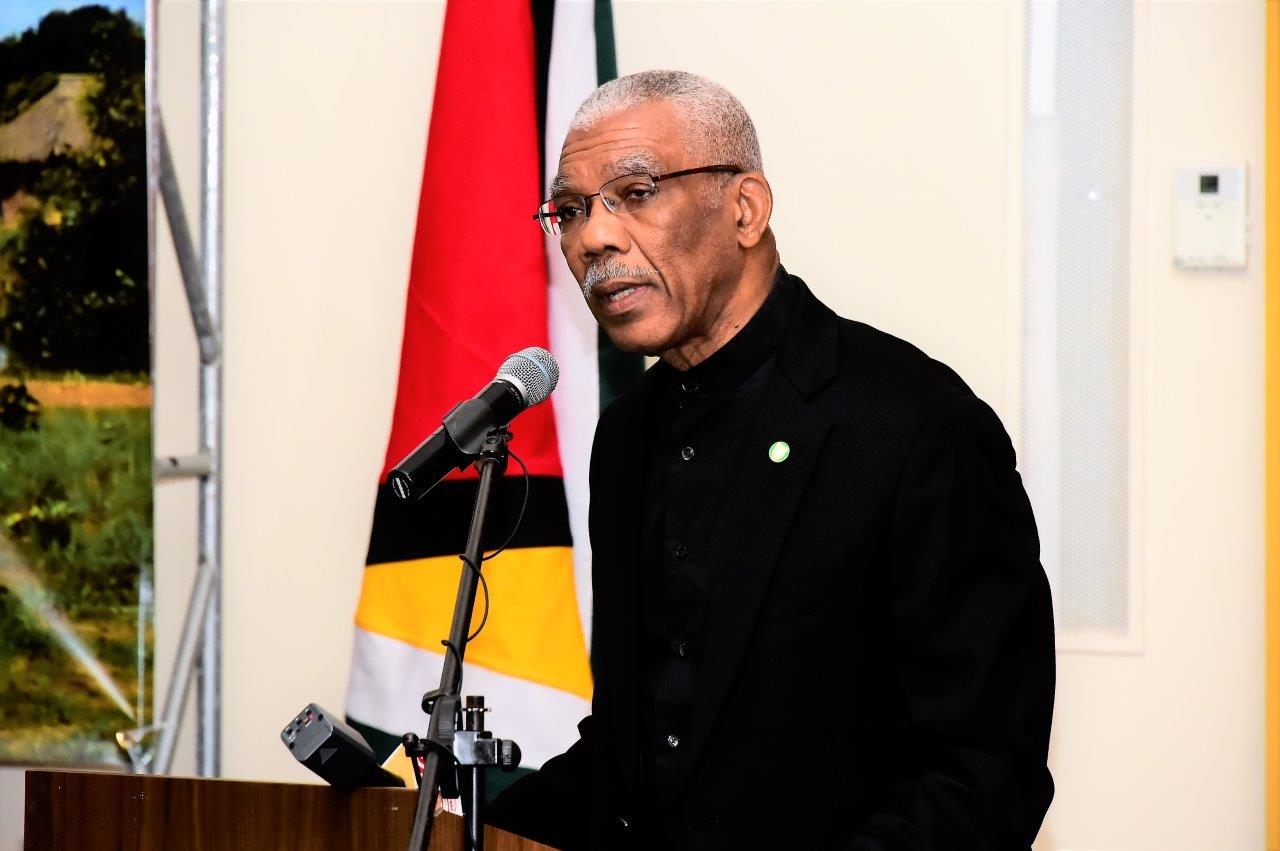 Georgetown, Guyana – (April 3, 2017) President David Granger said that a small State like Guyana, with limited resources, can ill afford the contentious and confrontational amphitheatre of international relations and, therefore, it must pursue in its national interest, the of safeguarding its territorial integrity and promotion of trade and economic development through diplomacy. He noted too, that an important part of Guyana’s diplomatic policy is to garner international and regional support to ensure the safety and security of its citizens. The President was at the time delivering an address to Guyana’s overseas diplomatic representatives, who are all in the country for the 2017 Heads of Missions Conference, which opened today at the Pegasus Hotel.

“The protection and projection of Guyana’s sovereignty are essential elements of Guyana’s diplomacy. Guyana lacks both the economic strength to sanction other states and the military capability to extend its power beyond its borders. A small state, notwithstanding its limitations, can seek to influence international relations in order to achieve its foreign policy objectives,” the Head of State said.

It is against this backdrop, that he charged the Heads of Missions to ensure that the pursuit of the national interest, which is inextricably linked to territorial integrity, is at the forefront of their work programme.

President David Granger charged Guyana’s Heads of Missions to remain steadfast in pursuit of the national interest in the international and regional community.

He explained that in the face of threats to security and sovereignty, Guyana has sought and obtained the protection and support of the international community, noting that Guyana has consistently elicited assurances of solidarity and support for its sovereignty and territorial integrity from the Caribbean Community (CARICOM), the Commonwealth and other international organisations such as the United Nations. “The United Nations General Assembly Resolution (A/RES/49/31) of 1994 called on the Security Council and other relevant organs of the United Nations to pay special attention to the protection and security of small States…,” President Granger reminded.

Speaking of the Guyana’s commitment to regionalism, the President spoke of country’s early diplomatic exertions, which contributed significantly to the establishment of the Caribbean Free Trade Area (CARIFTA), CARICOM and later bodies such as the Association of Caribbean States (ACS), Community of Latin American States (CELAC), Organisation of American States (OAS) and Union of South American States (UNASUR). He explained that as the only English-speaking country on the South American continent, Guyana projects itself as a Caribbean country with continental characteristics and can, therefore, influence international relations by exploiting this geo-strategic advantage. It is for this reason he said, that regional bodies such as CARICOM are especially vital to the country’s economy and security.

President Granger spoke of the leadership role played by Guyana in establishing diplomatic relations with Cuba in 1972 and said that the identity of the Caribbean and the hemisphere is inseparable to the foreign policy of individual countries in the region. 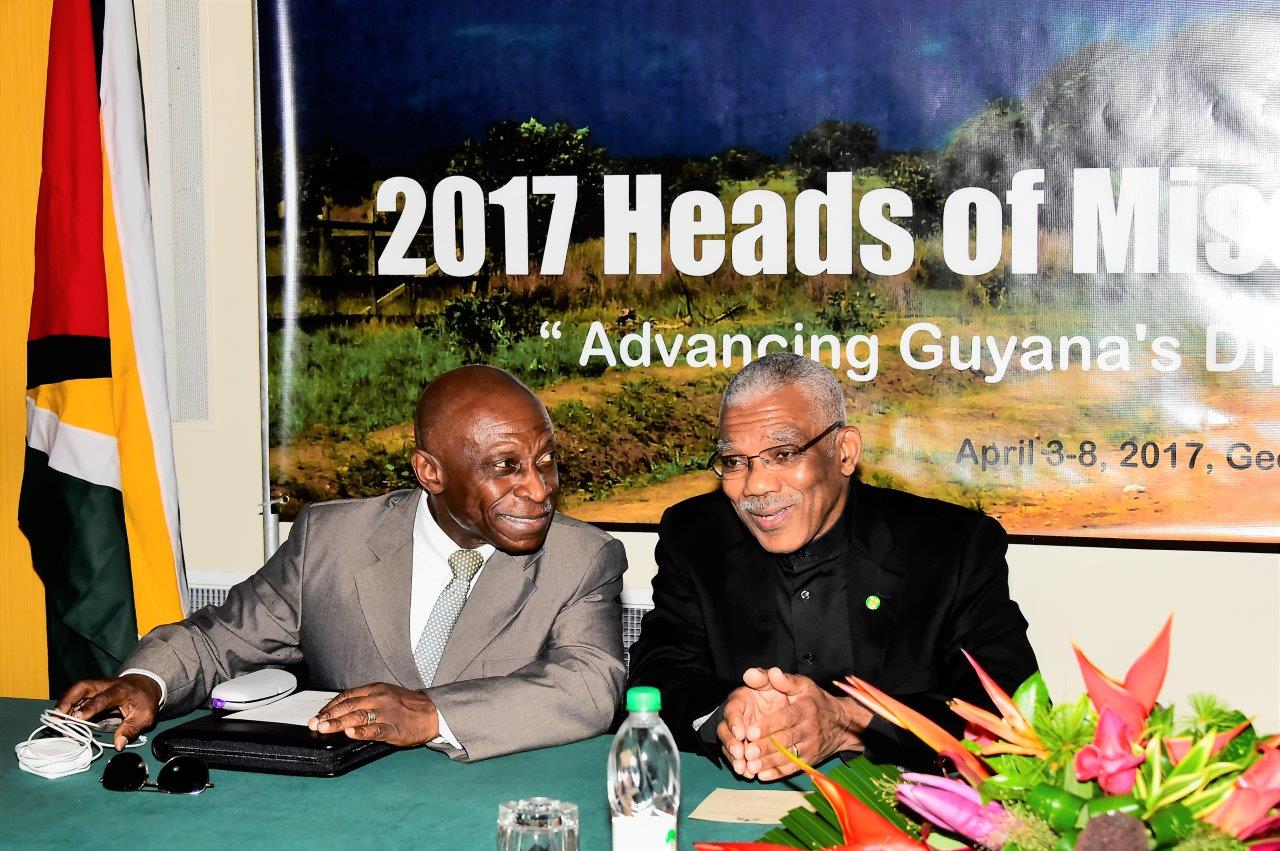 President David Granger and Minister of Foreign Affairs, Mr. Carl Greenidge share a light moment before the start of the opening ceremony of the Heads of Missions Conference.

He also urged the Heads of Missions not overlook the strength of the Guyanese Diaspora. “The enormous size, extensive dispersal and enthusiastic patriotism of the diaspora are assets to be prized… It is important to be Guyanese, it is important to be Caribbean,” the President said.

The Head of State also emphasised the importance of citizenship and said that, “the state of Guyana has an obligation to extend its protection to every citizen. No one should be stateless.”

Meanwhile, Minister of Foreign Affairs, Mr. Carl Greenidge, who also spoke directly on the matter of Guyana’s territorial integrity, said that Guyanese have an obligation to preserve and maintain the country’s 83,000 square miles of land mass and to ensure that it is not diminished or compromised even to the extent of a blade of grass. This resolve is necessary especially in light of the ongoing Guyana-Venezuela border controversy.

With regard to Venezuela, the Minister told the diplomats to ensure that every channel of communication remains open and active with the representative of the United Nations Secretary General, Mr. Dag Halvor Nylander of Norway. Notably, however, the controversy with Venezuela does not stand alone, the country’s eastern neighbouring State, Suriname, has also laid claims to some of its territory and Minister Greenidge said that, “Guyana is the only country in this hemisphere whose border problems pose a threat – an existential threat – to its very existence as a state. This is why we cannot afford to be confused by those who with the best intentions in the word urge us to go softly in our reactions to challenges to those borders.” 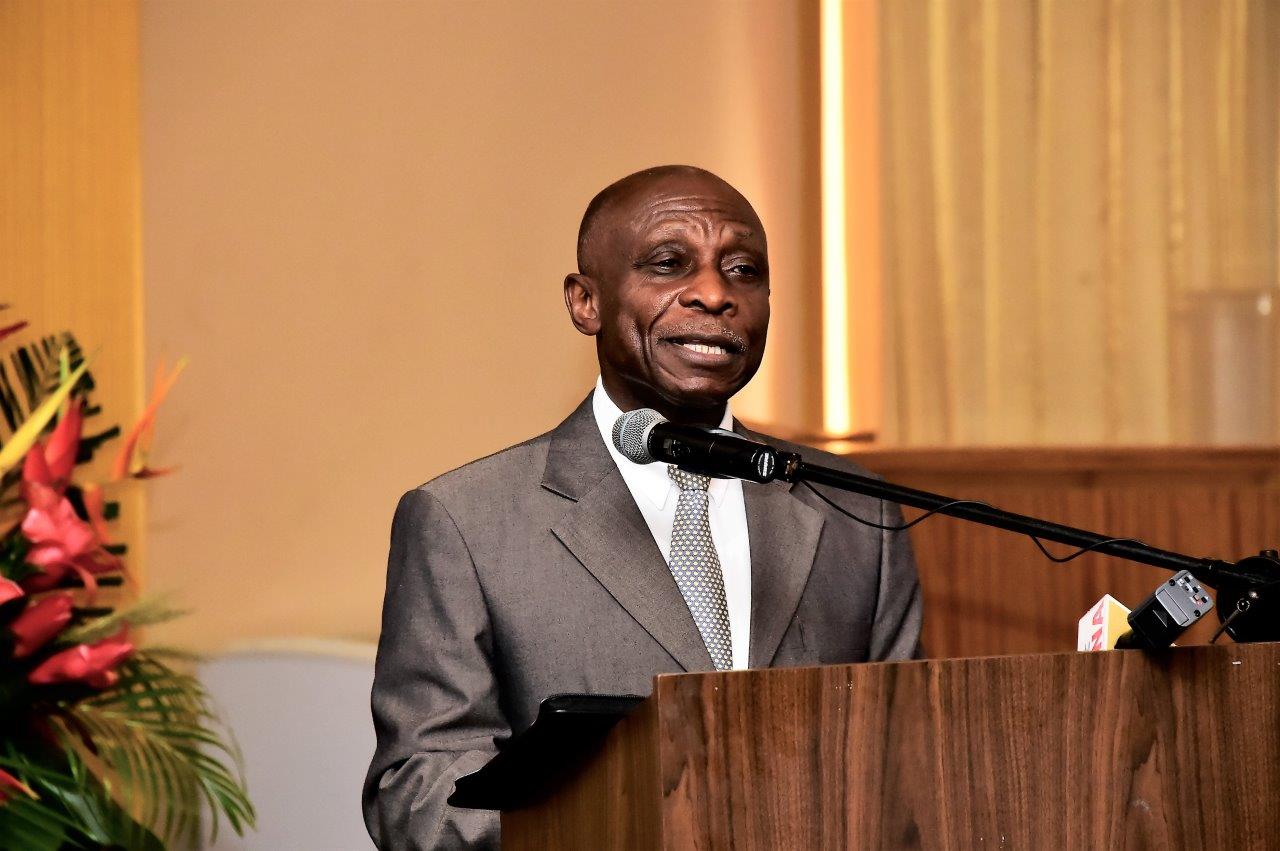 Minister of Foreign Affairs, Mr. Carl Greenidge delivering his remarks at the Heads of Missions Conference

He explained that foreign policy is an extension of national policy, which must have as its primary aim, the overall development of the nation. As such, it is necessary for diplomatic representatives to understand their role and responsibilities as external actors as well as the underpinnings of national development. “Changing international alliances, new long-term trends in global power underpinned by uneven economic development are all contributing to what at times appears to be the fraying of the global system. That process is inevitably throwing up special challenges and difficulties for small developing states, such as Guyana,” he said.

The Foreign Affairs Minister also spoke at length on “economic diplomacy”, which is an important part of the Government’s wider development agenda. “It [economic diplomacy] goes beyond trade and investment to the resolution of multiple causes of international conflicts. The agenda of economic diplomacy is comprehensive and includes amongst others issues pertaining to foreign trade and import-export relations, promoting of national economic interests in other countries, informing and updating potential foreign investors on investment opportunities, negotiating economic and trade agreements on economic and trade co-operation, as well as co-operating with a view to eliminating problematic divergences and harmonising standards in various sectors,” he said. 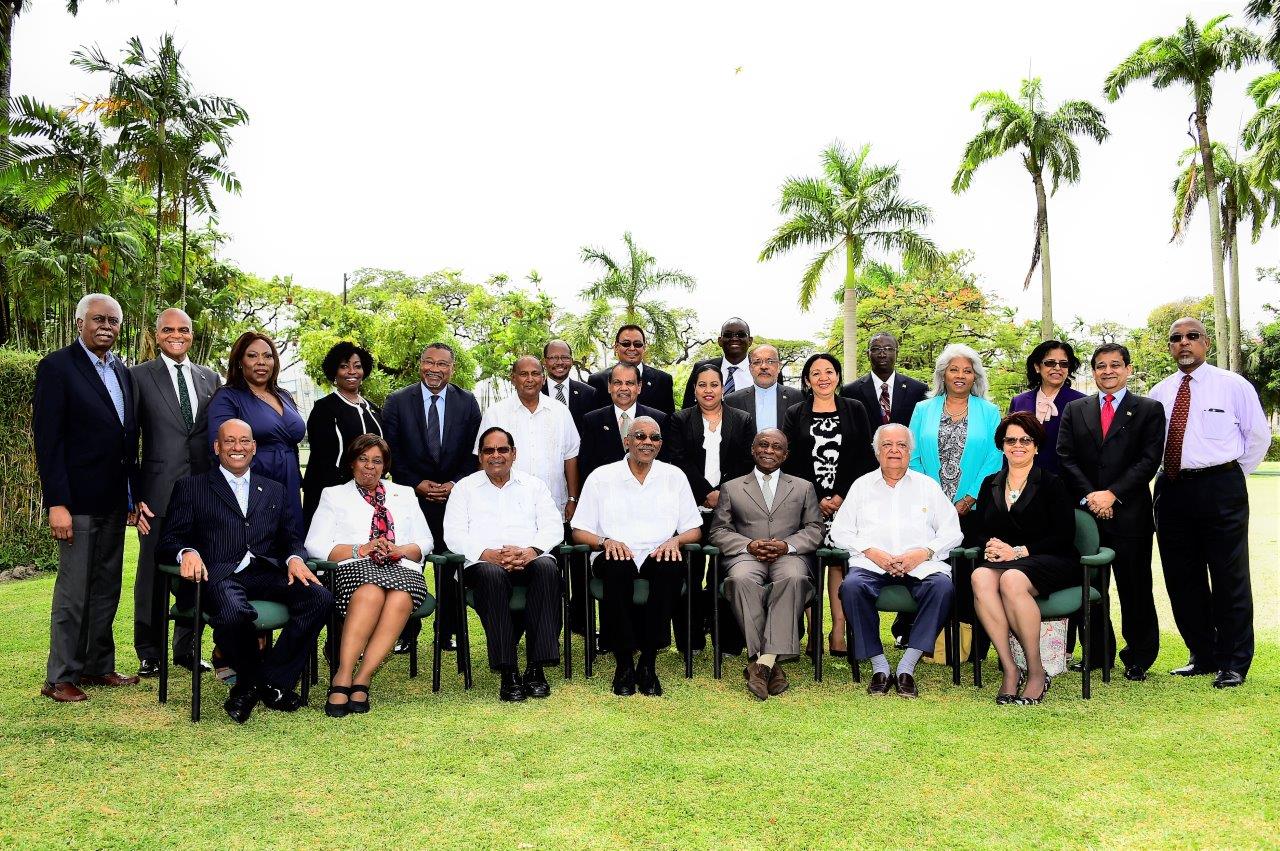 Director General in the Ministry of Foreign Affairs, Ms. Audrey Waddell, in her remarks said that over the next five days, the diplomatic envoys will be deliberating with stakeholders in the public and private sectors on how, together, they can strengthen their efforts to promote and protect the country’s interests abroad. “This Heads of Missions Conference avails us of an unparalleled opportunity to undertake collectively, a review of the discharge of our responsibilities, in order to obtain our pivotal foreign policy objectives. Equally, it allows for high-level strategising on how to advance Guyana’s diplomacy in the 21st century,” she said.

Following the opening ceremony, President Granger hosted a special lunch for the Heads of Missions at the Baridi Benab at State House.