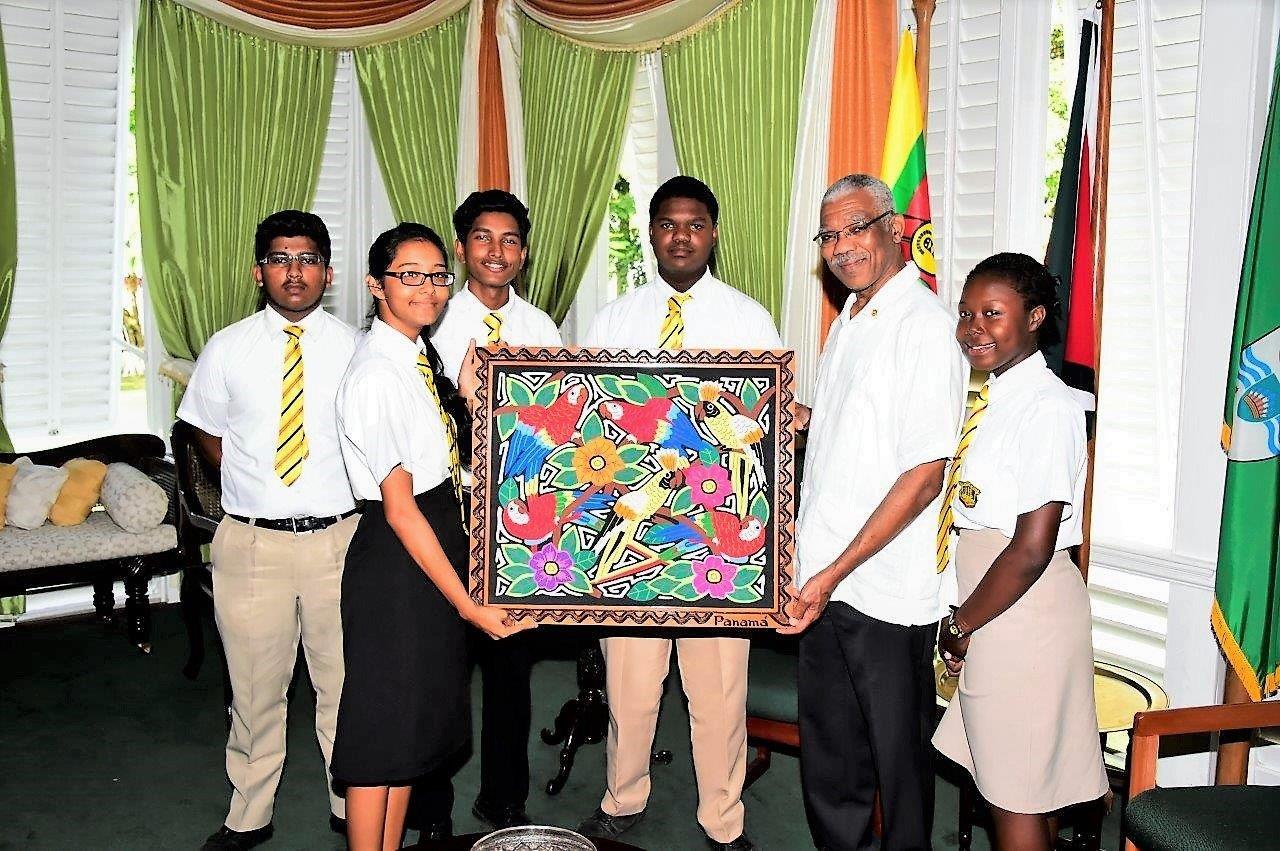 Georgetown, Guyana – (March 30, 2017) President David Granger, today, met with a group of students and teachers from Queen’s College, who have just returned from a trip to Panama, which was part sponsored by the Head of State. The meeting was a very interactive one in which the President shared some of his memories about his own days at Queen’s College as well as discussed the importance of education and listened as the students shared some of the experiences they enjoyed during the trip.

The trip was conducted as a practical exercise for the students’ Spanish syllabus to provide them with first-hand experience in a Spanish speaking country. Thanks, in part, to the President’s sponsorship, 38 students were able to travel to Panama to experience the culture and partake in educational tours and other cultural activities.

During the meeting, the President presented the students with books, pens and commemorative coins with the inscription “Every child in school”, which the President said was his personal motto. “It is important to stay in school. My wife and I launched a programme to provide boats and buses and bicycles for children to get to school because we feel it is the only way to overcome not only ignorance but also poverty. And once people stay in school I think that they will be able to launch a personal career; the whole country is lifted up; it is a matter of great pride,” he said.

President David Granger poses with the students as they present him with a Mola, Panamanian art piece, which depicts the flora and fauna of that country. 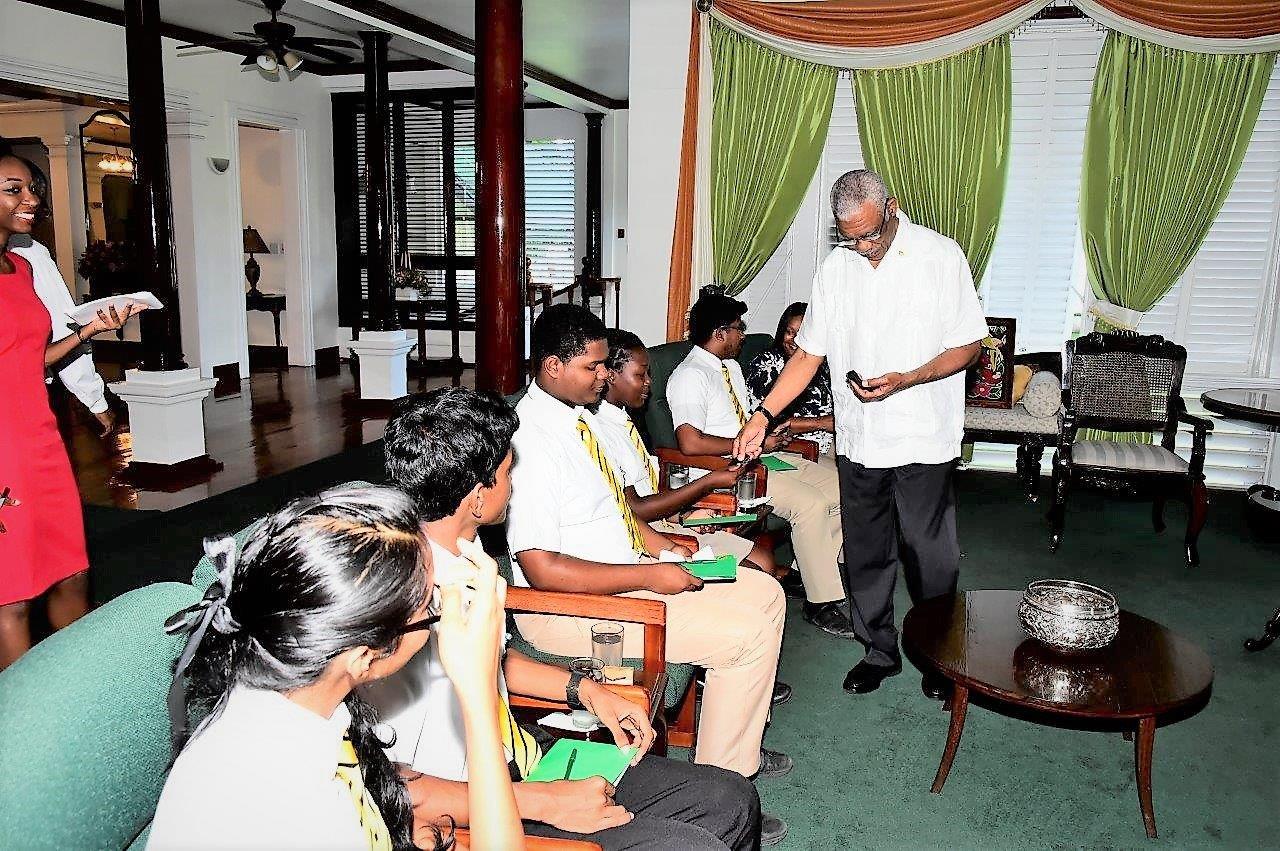 The students, in turn, presented the President with a Queen’s College pin, which President Granger promised to wear proudly as a former student, and a cultural Mola, a traditional Panamanian piece of art, which depicted the flora and fauna of Panama. The President said, “I would like to say how grateful I am because you know we are promoting this idea of a ‘green’ state in Guyana. I am very happy to have been involved. I gave my support because I support education in every form…our flora and fauna are world class and we can boast about that… I am very proud of Guyana too and our own flora and fauna,” the President said.

President Granger shared with the students some of his experience during his days as a student at Queen’s College. “It was a great experience in my life… I don’t think anyone who goes there could ever forget. It is a powerful experience not only because of the love of school and the tradition of the school but in my day it made education easy. It was like a breath of fresh air …There was always healthy competition and a great deal of pride… In my own experience it was a place, which had a tradition of encouraging students to think independently,” the President said. 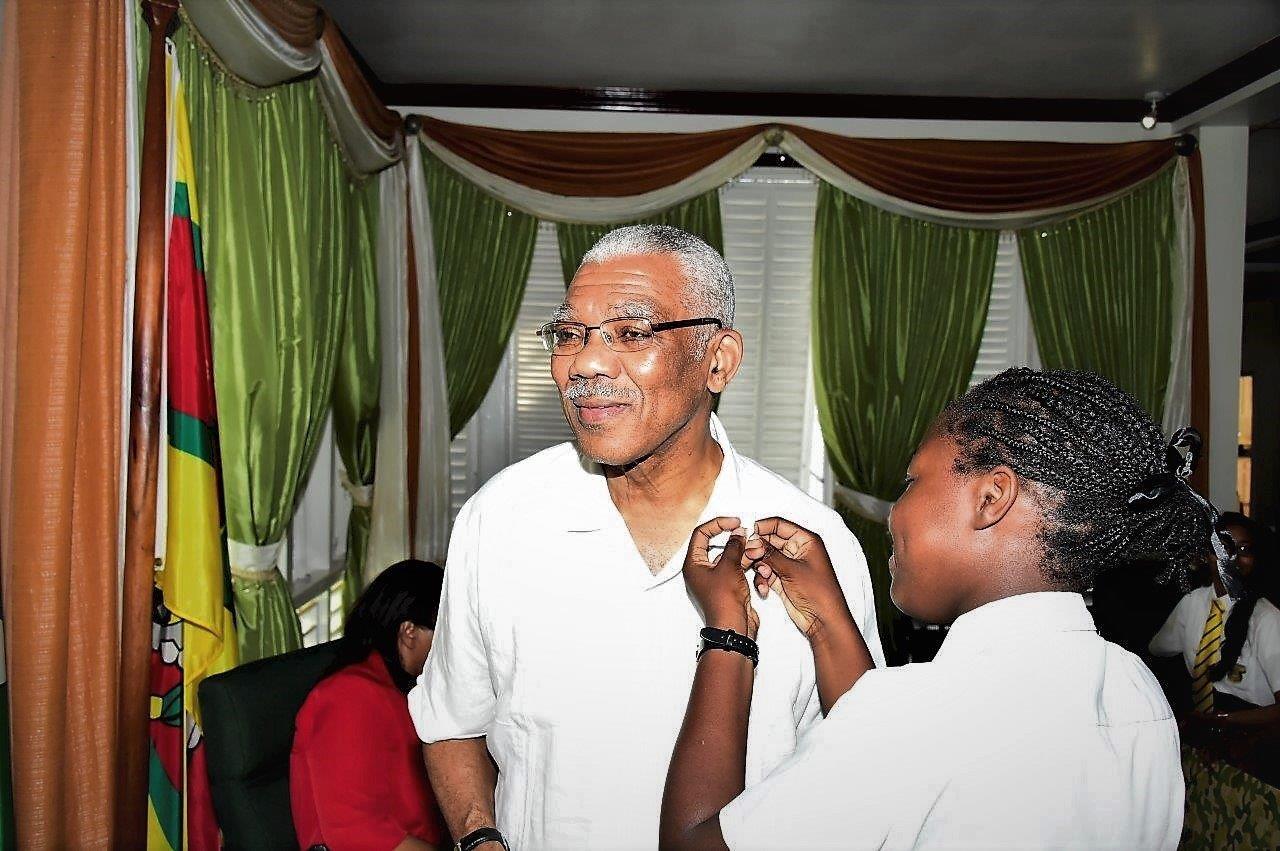 President David Granger being presented with a Queen’s College Pin

Principal of Queen’s College, Ms. Jackie Benn-Ralph expressed her gratitude to the President for his support for the trip to Panama, stating that it showcased the depth his generosity. “The President’s sponsorship was a very significant contribution that allowed the teachers and students to be accommodated comfortably and [to] access paid tours in Panama,” she said.

Ms. Renuka Tewari, one of the students expressed how excited she was to meet the President and said that she loved his humourous personality. “I am really thrilled that our own President as a former student of QC and it tells a lot about the students we are sending out to the world and that after so many years he is still contributing to our school and our trip was made possible because of his help,” she said.

Mr. Jonathan Gobin, another student, said that he enjoyed listening to the historical facts about the State House that the President provided while speaking to them. “I feel that the President is a very humble person, he spoke to us like we are on the same level… He also has a lot of pride for his country… I believe that the President wants to see that each and every student has a good education just as he had,” he said.