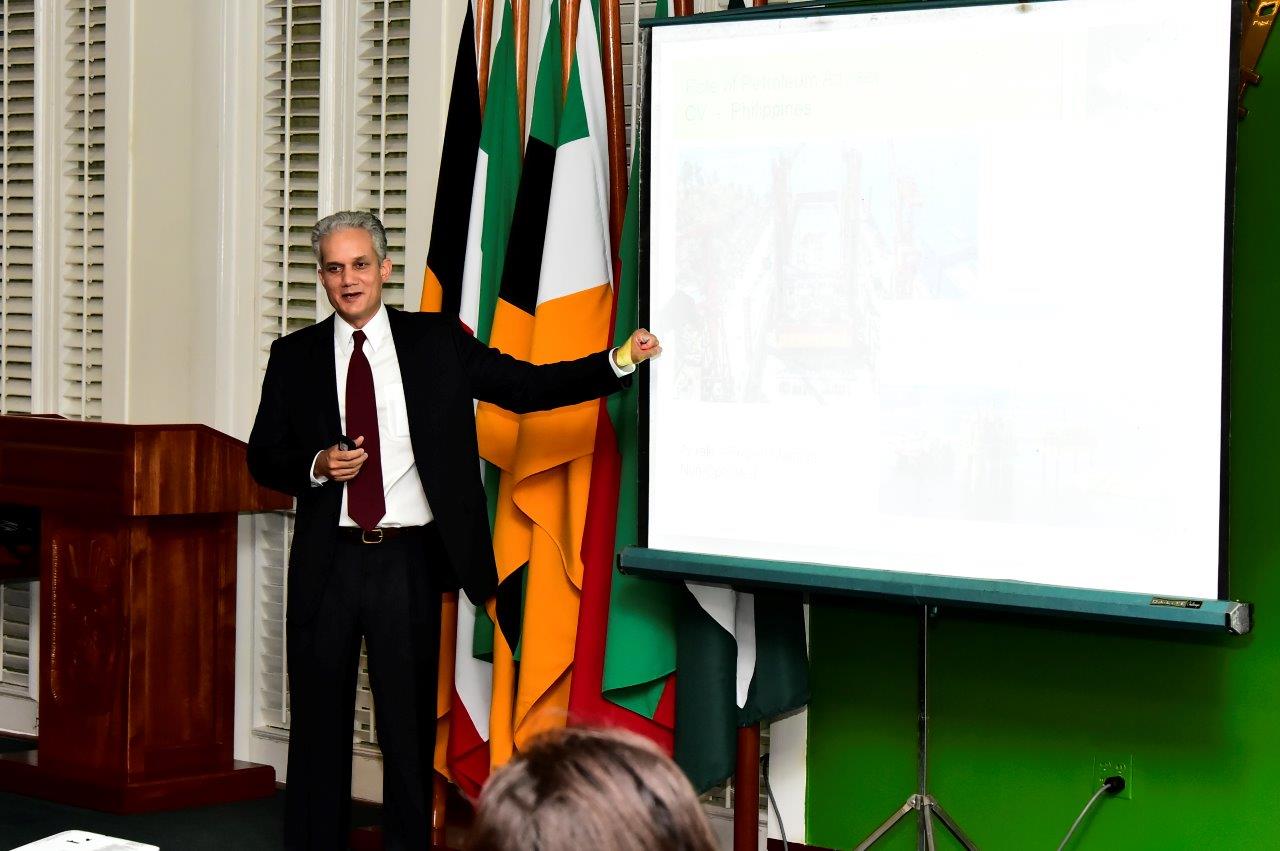 Georgetown, Guyana – (March 28, 2017) Newly appointed Presidential Advisor on Petroleum, Dr. Jan Mangal, today, briefed Cabinet on the future of the oil and gas sector, outlining how he sees his role and the actions that must be taken to prepare Guyana to manage the sector. This, even as Minister of Natural Resources, Mr. Raphael Trotman noted that oil company, ExxonMobil could make another significant announcement on its work in Guyana Exclusive Economic Zone (EEZ) within the next two weeks.

In an invited comment after the presentation to the Cabinet, Dr. Mangal said that given the fact that he is new to the position it was important for him to outline his plans in the context of the President’s vision for the development of the sector. “It is to give Cabinet some comfort around the role itself, my experience and then also the vision of the President and the high level vision, which we will have to work on and Guyanese will have to work on. But it was really to give Cabinet a view of where we are starting for Guyana,” he said.

The oil and gas expert explained that as the Advisor to the President on Petroleum, he will be tasked with being the ‘middle ground’ between the Government and stakeholders to ensure that the necessary plans and policies are put in place. “It is around bringing oil and gas expertise, someone from the industry like myself, in the position in the Ministry of the Presidency, who can speak to all stakeholders in Government and outside of Government. It is a position in the Ministry that can look at things holistically in terms of Guyana’s energy sector; how oil and gas will affect Guyana as a whole. It is about how it will touch all areas of Guyana, business and all social issues. The role will touch on all areas and will try to stimulate the stakeholders input and I expect that it will grow over time,” he said.

Dr. Mangal, whose appointment is funded through the Inter-American Development Bank (IDB), noted that while his initial role is intended to last for a six month period, there is an intention to seek funding for the appointment to be extended and expanded to include other experts from the technical, legal and commercial areas of the oil and gas sector.

Minister Trotman, in an invited comment, said that Dr. Mangal’s presentation could not be more timely since ExxonMobil has been aggressively carrying out seismic and exploratory work, with an announcement expected in another week or two. This, he said, will help the Cabinet to act more definitively on matters in relation to this sector.

“The presentation was about the technical aspects, where we would spend out monies and the kind of vision we would like to have for Guyana. So it was a good presentation; very timely and now I believe that Cabinet will examine it some more and look at the considerations some of which are political, some technical, some financial and we will ultimately come up with the blueprint if I can put it that way for the development of the oil and gas sector,” he said.

Minister Trotman noted that Government is working round the clock to put all systems in place to prepare Guyana for the ‘first oil.’ “We are preparing every day at the Ministry and Dr. Mangal is joining the Government to prepare for the ‘first oil’ and so there is something happening everyday. We are looking at contracts, identifying persons to do things, assessing requests for permits. The Environmental Protection Agency (EPA), the Guyana Geology and Mines Commission (GGMC), they are all working,” he said.

In January 2017, ExxonMobil announced positive results from its Payara-1 well offshore Guyana. Payara is ExxonMobil’s second oil discovery on the Stabroek Block. The well was drilled by ExxonMobil affiliate Esso Exploration and Production Guyana Limited, and encountered more than 95 feet (29 meters) of high-quality, oil-bearing sandstone reservoirs. It was safely drilled to 18,080 feet (5,512 meters) in 6,660 feet (2,030 meters) of water. The Payara field discovery is about 10 miles (16 km) northwest of the 2015 Liza discovery.

According to ExxonMobil, in addition to the Payara discovery, appraisal drilling at Liza-3 has identified an additional high quality, deeper reservoir directly below the Liza field, which is estimated to contain between 100-150 million oil equivalent barrels.