Acting Chancellor, Chief Justice sworn in -way cleared for Court of Appeal shortages to be addressed 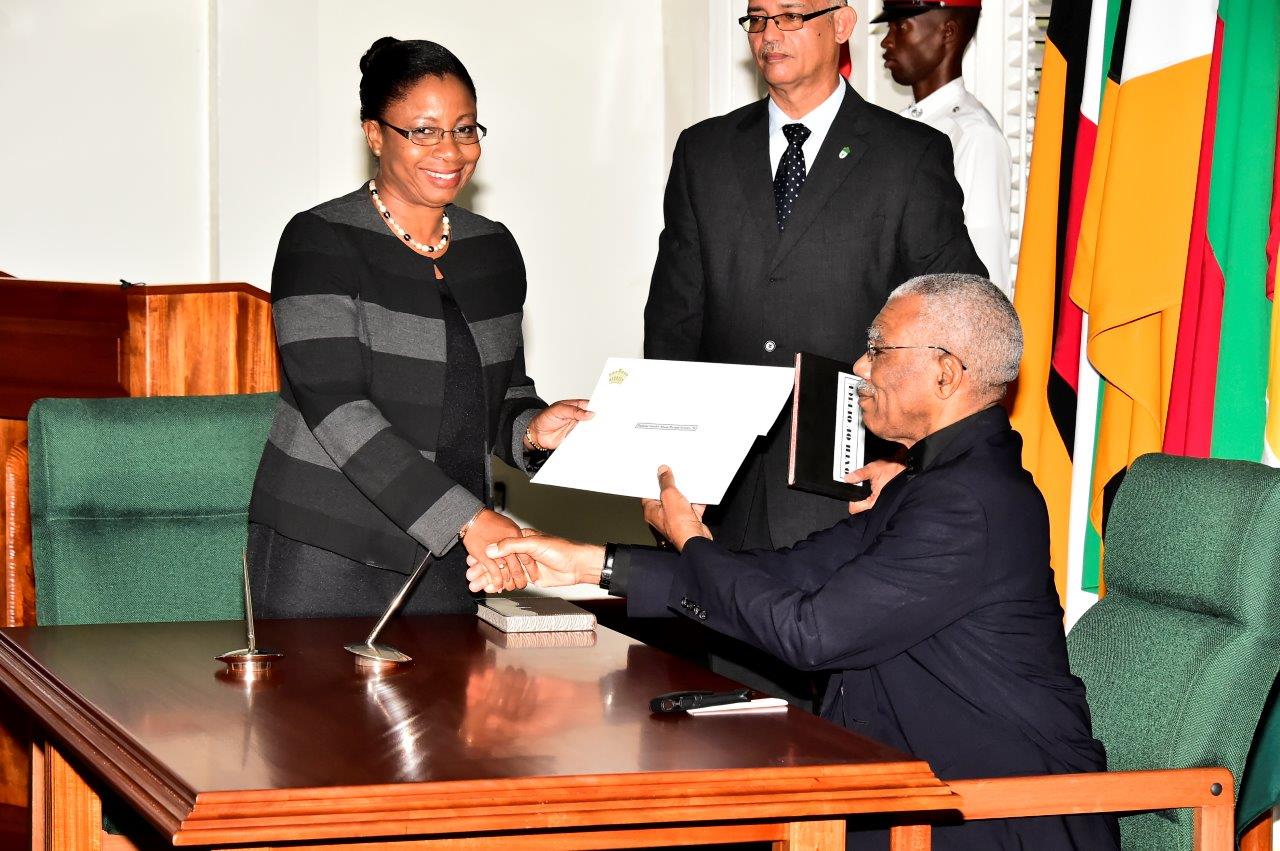 Georgetown, Guyana – (March 28, 2017) President David Granger, today, administered the Oath of Office to Justice Yonette Cummings-Edwards and Justice Roxane George-Wiltshire as they were sworn in to perform the functions of Acting Chancellor of the Judiciary and Acting Chief Justice, respectively. Speaking to reporters following the swearing-in ceremony at State House, the President said that these appointments are a step in the right direction to ensure that the shortage of judges on the Court of Appeal.

“There is a shortage and we are moving quickly with the Chancellor and the Chief Justice, who have been installed, to have the Court of Appeal constituted; to have the Judicial Service Commission (JSC) meet to make recommendations and fill the vacancies as soon as possible. I am very confident that the new Chancellor is aware of the shortages and that…as quickly as the JSC could meet and the names submitted to me I intend to move ahead. I have no interest in perpetuating a situation in which there are insufficient judges. The backlog is being built up and I see the swearing in of a Chancellor and Chief Justice as a step in the right direction. So I expect that as soon as the JSC makes its recommendations I would be able to give approval and move ahead,” the President told reporters.

Responding to questions on claims by the Opposition Leader that the President had refused a prior list submitted by the JSC, President Granger said that he withheld approval of some recommendations until the new Chancellor could have an opportunity to review those recommendations. “I withheld approval because I sent the recommendations to the present Chancellor, who has agreed to look at them and resubmit a list to me. As soon as I get that list I will be able to act. So I did decline; I saw the list and I received some information and on the [basis] of that information I sent it to the present Chancellor and I am awaiting her advice,” the President said.

The President, during brief remarks at the ceremony, said that the offices of Chancellor and Chief Justice are the most senior in Guyana’s judiciary and that their appointments are necessary in order to uphold the Constitution and for the administration of justice. The President congratulated Justice Edwards-Cummings and Justice George-Wiltshire on their appointments and urged them to continue to uphold the high traditions and standards of their offices. He also urged members of the legislative, executive and judicial branches of government to continue to respect the Constitution of the Cooperative Republic of Guyana.

Justice George-Wiltshire said that she is honoured to serve her country and that she will strive to make a difference in the administration of justice in Guyana. “We know we have our challenges but challenges are meant to be overcome. I will be supporting Justice Cummings-Edwards. She has put in place a number of projects and programmes over the past year and I will try my best to maintain the momentum that she has maintained over the last year. I pledge to be supportive of her and I look forward to the support of my colleagues,” she said. Some of the immediate projects that she will be working on include tackling the backlog of cases as well as providing more sensitisation to the public about the functioning of the judicial system in Guyana.

Remarks by His Excellency Brigadier David Granger, at the Cove and John Ashram’s celebration of Maha Shivaratri on 24th February, 2017