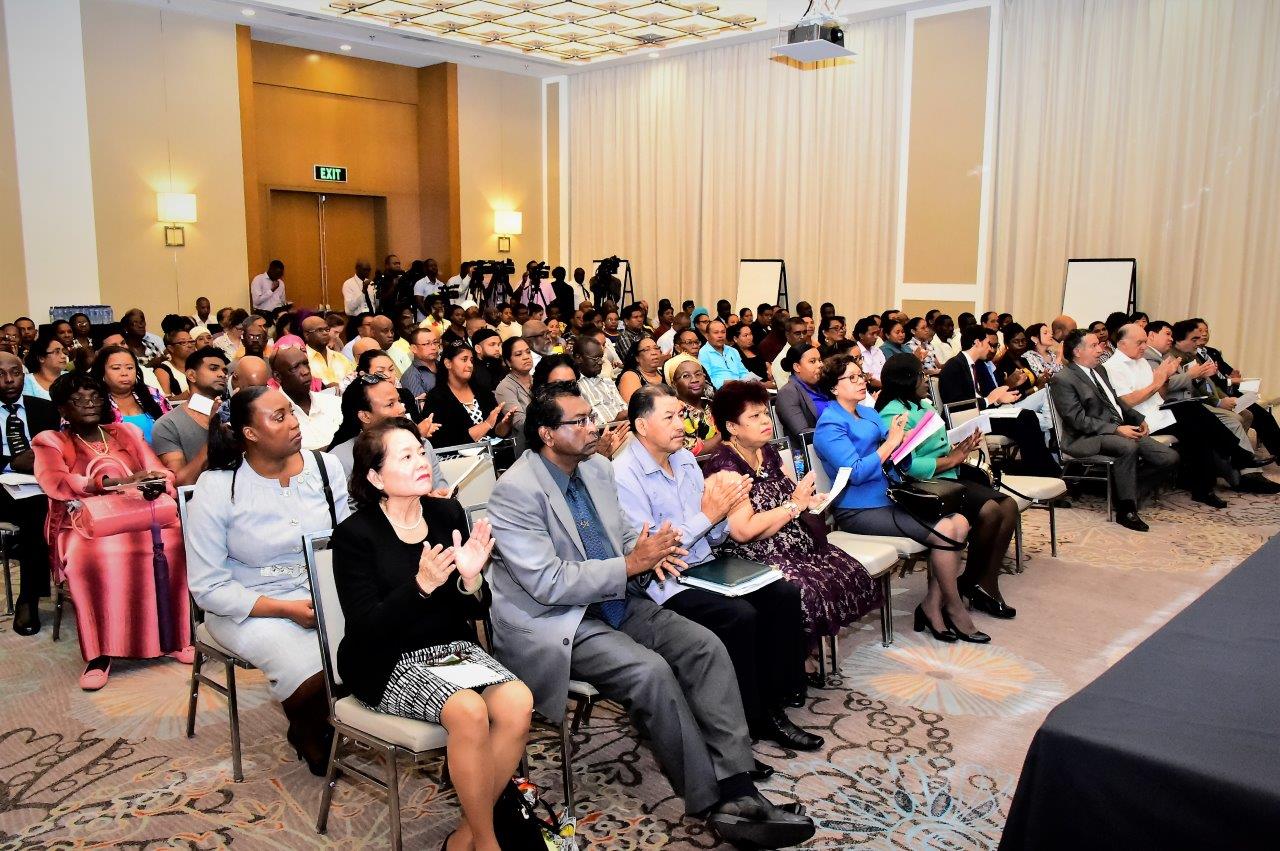 Georgetown, Guyana – (March 16, 2017) President David Granger, today, said that the Ministry of Social Cohesion holds the responsibility to support the development of an environment where“…diversities are embraced, conflicts resolved, networks and collaboration with stakeholders strengthened and decision-making processes, which result in equal opportunities for all.” The President made these comments at the Opening Ceremony of the Social Cohesion Strategic Plan 2017-2021 Validation Workshop at the Marriott Hotel.

Speaking on the reasons behind the creation of a Ministry of Social Cohesion, the President said that its establishment was done with the specific objective of implementing the five point programme, which had been discussed at the National Roundtable on social Cohesion in 2015. President Granger, at that time, had outlined that programme as including the elimination of income disparities caused by poverty, the eradication the worst forms of inequality, embracing inclusivity at political and social levels, enhancing social protection and reducing unemployment and ensuring equal access to education to ensure greater equality in opportunity.

This, the President said, is important because Guyana still has some work to do to overcome past issues that have created divisions on the society. He said that Guyanese have been exposed to discord arising from ethnic, economic, political, religious and other differences, as seen in the ‘Disturbances’ period and the period of the ‘Troubles’ in the 2000s. “Guyana, today, still needs to stanch the sort of social erosion that degenerated into civil violence of the ‘Troubles’ in the recent past. We still see how easily the ranting of a few rancorous persons can rekindle racial animosity, a retrograde step, which has no place in modern society…Our nation has been scarred by violence, which left a lingering legacy of distrust with the threat of disorder…we have to work together to repair that damage, restore trust and rebuild the bases of a ‘moral community’ which enable us to trust each other,” he said.

The President said that the Ministry has a duty to ensure, also, that political and institutional authority is exercised in a manner that promotes equality and inclusivity. “The Ministry’s mandate is to be measured not by the size of its budget but by its accomplishment in harmonising social relations… The Ministry’s task, also, is the effective management of our multicultural diversity. Our multicultural tapestry adds to our richness and uniqueness as a nation. It is a cause for celebration,” he said.

Additionally, the Head of State said that the Ministry has a duty to ensure that political and institutional authority is exercised in a manner that promotes equality and inclusivity. “Its achievement can be calculated in the economic dividend earned from reducing enmity and harnessing the energy of all our peoples,” he said.

President Granger added that Guyana’s diversity is an asset not a liability. As such, he said that social cohesion becomes even more important in order to weave social, economic and political strands into a community so that everyone enjoys a sense of belonging and where differences are recognised and respected. “Social cohesion is essential for everyone’s existence. The absence of social cohesion will inflict unbearable social and economic costs… The quest for order, peace and safety is eternal. Social cohesion is indispensable to human safety and public security,” he said.

Guyanese, the President believes are fortunate to live in relative peace despite the challenges to national unity that the country has faced. “Multiculturalism must not become an impediment to social cohesion. It must not be a source of discord, disunity and division… we feel a great sense of satisfaction that violent religious conflict and major racial riots do not erupt. We are pleased by the level of goodwill and understanding which exists among the social groups. We must build on this foundation,” he said.

The President said that the Validation Workshop is part of the process of constructing and implementing a national strategy aimed at enhancing social cohesion, and he thanked the work of the Ministry for the work it has committed to this process thus far.

The President said that social cohesion is concerned with enhancing cooperation and collaboration between and among citizens, civil society, institutions and the state. It is aimed at: encouraging greater equality and building bridges across the boundaries of class, ethnicity, gender and geography; enhancing increased access to public services such as education, health, housing, human safety and social protection; and ensuring good will, harmony, peace, security, tolerance and understanding. 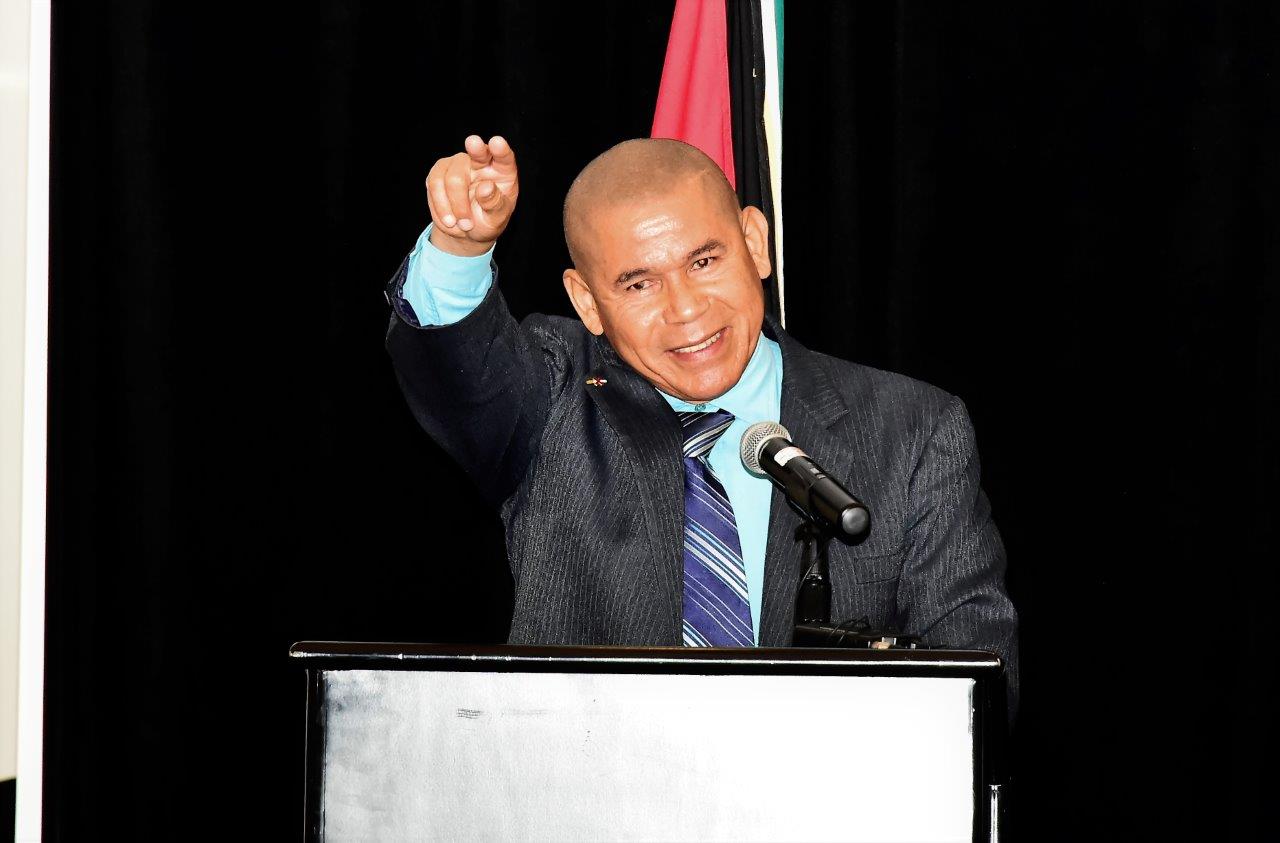 It is with this view in mind that the Ministry of Social Cohesion set out to establish a Strategic Plan and the Consultations for the plan focused on gathering feedback on five thematic areas: promotion of economic equity and opportunities for all, enhancement of citizen safety and security, promotion of social inclusion and tolerance, the strengthening inclusive and participatory governance; and promoting harmonious ethnic and race relations.

“Of those 30 consultations we were very overwhelmed with the level of participation…they were well attended… From the commencement of the process, the thematic areas have remained constant. Our Constituents still believe that those are the five main areas for addressing social cohesion in Guyana,” she said. Ms. Patterson also commended the work of the Former Minister of Social Cohesion, Ms. Amna Ally, who she said made significant contribution to the social cohesion strategic plan process before being transferred to the Ministry of Social Protection.

Minister of Social Cohesion, Dr. George Norton, who is tasked with taking the process forward, said that a lot of hard work has gone into designing the draft Strategic Plan and commended all the participants across the country, who played an integral role in the process. He said that a strategic plan will chart the way forward as it sets goals and objectives for strengthening social cohesion in Guyana.

However, he said that this would serve no purpose if it is not implemented effectively. “Advancing the social cohesion mandate in Guyana is not a task that the Government can undertake on its own. It requires all hands on board and I am happy that we also have representatives from the international community represented here at this workshop,” he said.

The Social Cohesion Strategic Plan 2017-2021 is being supported by the United Nations Development Programme (UNDP). Resident Coordinator of the UNDP, Ms. Mikiko Tanaka, said that the organisation has had many discussions with the Ministry every step of the way with regard to the compilation of the Draft Plan and commended the significant work that they have completed. However, Ms. Tanaka also said that social cohesion is not the Ministry’s work alone, but it is a job for everyone in Guyana. “Guyana is an extraordinary country where many different cultures meet and despite difficulties, live one next to the other. Guyana has made developmental progress in many ways in middle income and middle human development categories, however there is still some way to go in unleashing Guyana’s potential and achieve President Granger’s vision of a good life for all,” she said.

Ms. Tanaka said that social cohesion is an important catalyst and glue for the 17 Sustainable Development Goals (SDGs) and is a key to leave no one behind. She said that the SDGs are also interconnected and that issues such as poverty, hunger, inequality, insecurity, unemployment and educational underperformance have deep and complex root causes. “Resolving these issues require coordinated actions between line ministries and other institutions nationally, regionally and locally. The UN system will work together with the government to embed multidimensional approaches and development policies and as part of this commitment the UN country team in Guyana will endeavour to promote social cohesion in its developmental work,” she said.

The validation exercise will see stakeholders, who participated in the countrywide consultation process conducted by the Ministry of Social Cohesion, coming together to give final comments and to validate the contents in the Draft Strategic Plan which was released to the public on February 14.

During today’s session, the participants discussed highlights of the Draft Social Cohesion Strategic Plan, and then participated in group discussion on intervention areas of the plan. The groups were then each given a chance to present their findings based on their discussions.