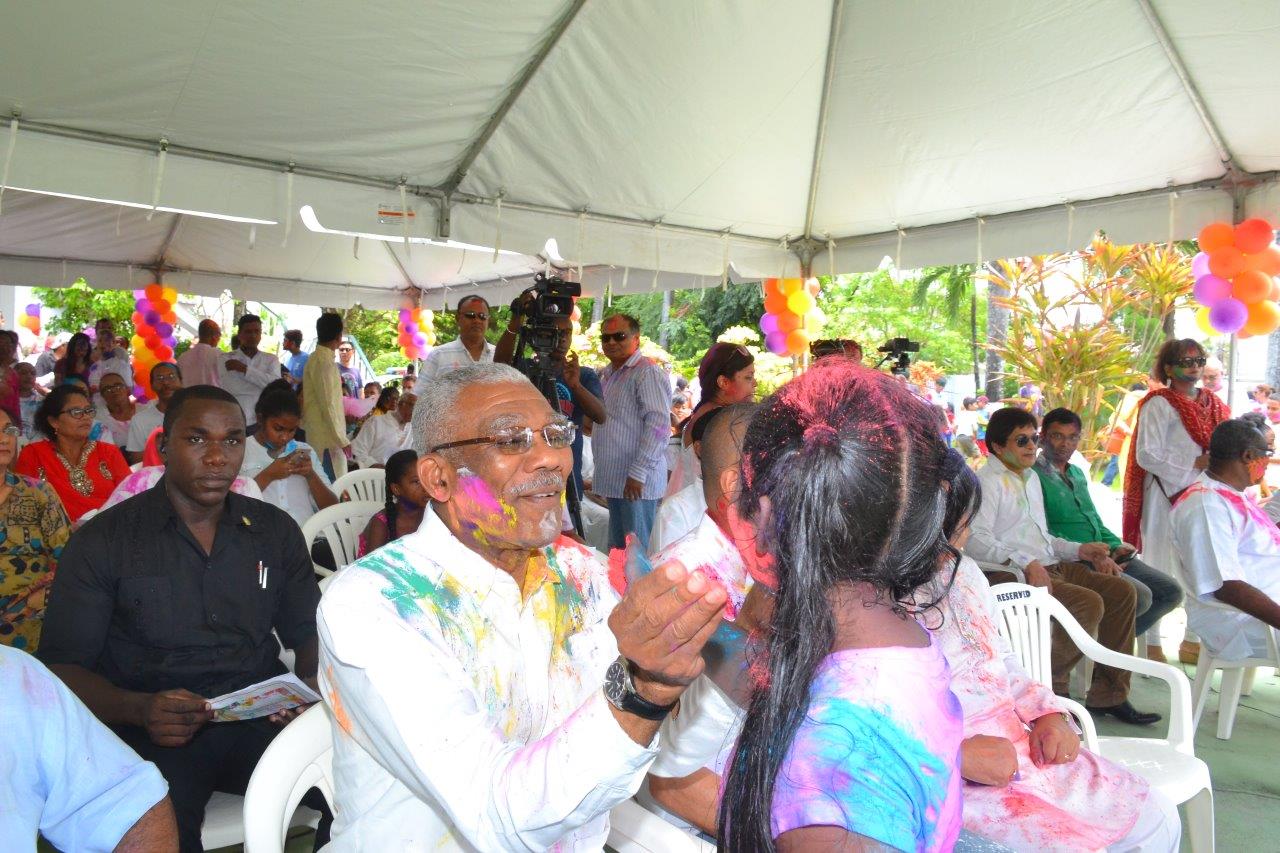 Georgetown, Guyana – (March 12, 2017) While the celebration of Holi has strengthened the bond among Hindus in Guyana, it has also extended that bond to other religious and ethnic groups. President David Granger, today, made these comments to hundreds of Guyanese of all races, who gathered at the Indian Cultural Centre in Bel Air, to celebrate Holi (Phagwah), the festival of colours.

The President, who participated in the traditional Phagwah play, said that that the celebration is even more joyful, this year as the nation commemorates the centenary of the abolition of Indian indentured immigration. “Holi has been a source of solidarity and sustenance, during and beyond the period of indentured immigration… Holi has reinforced the link with the motherland and re-established cultural connections,” he said.

Following the arrival of about 240,000 Indian indentured immigrants in British Guyana between 1838 and 1917, President Granger said that the Hindu faith served as a source of strength throughout their period of hardship. “Indentured immigrants were thrust into a strange land. The plantation system was unkind and inhospitable. Indians suffered greatly as a result of the poor living and working conditions on the plantations… Festivals such as Holi brought happiness into an otherwise dreary life. It assured Hindus that good would defeat evil,” he said.

The President said that from an agricultural point of view, and for an agricultural people, Holi is also the colourful festival of Spring, which depicts the strong connection to the land, celebrates fertility and reinforces the bond between life itself and the land. “Holi is an opportunity for the renewal of human relations-an occasion for persons to set aside differences. It is time to forget and to forgive wrongs; to frolic, so let’s have fun!” the Head of State said.

The High Commissioner of India to Guyana Mr. Venkatachalam Mahalingam, during brief remarks, said that the Festival of Holi represents love and explained several legends on which the celebration is based on in India. Moreover, he said that Holi indeed represents a merging of cultures. “We all know that Guyana’s motto is One People, One Nation, One Destiny and the emphasis on social cohesion we are glad to see the real meaning of it in the congregation of proud citizens of Guyana here today. It is a true depiction of unity and diversity. May God bless Guyana,” he said.

Several persons in attendance, of various ethnicities and even visitors to Guyana, remarked that such festivities showcase the inclusivity of Guyana’s culture. 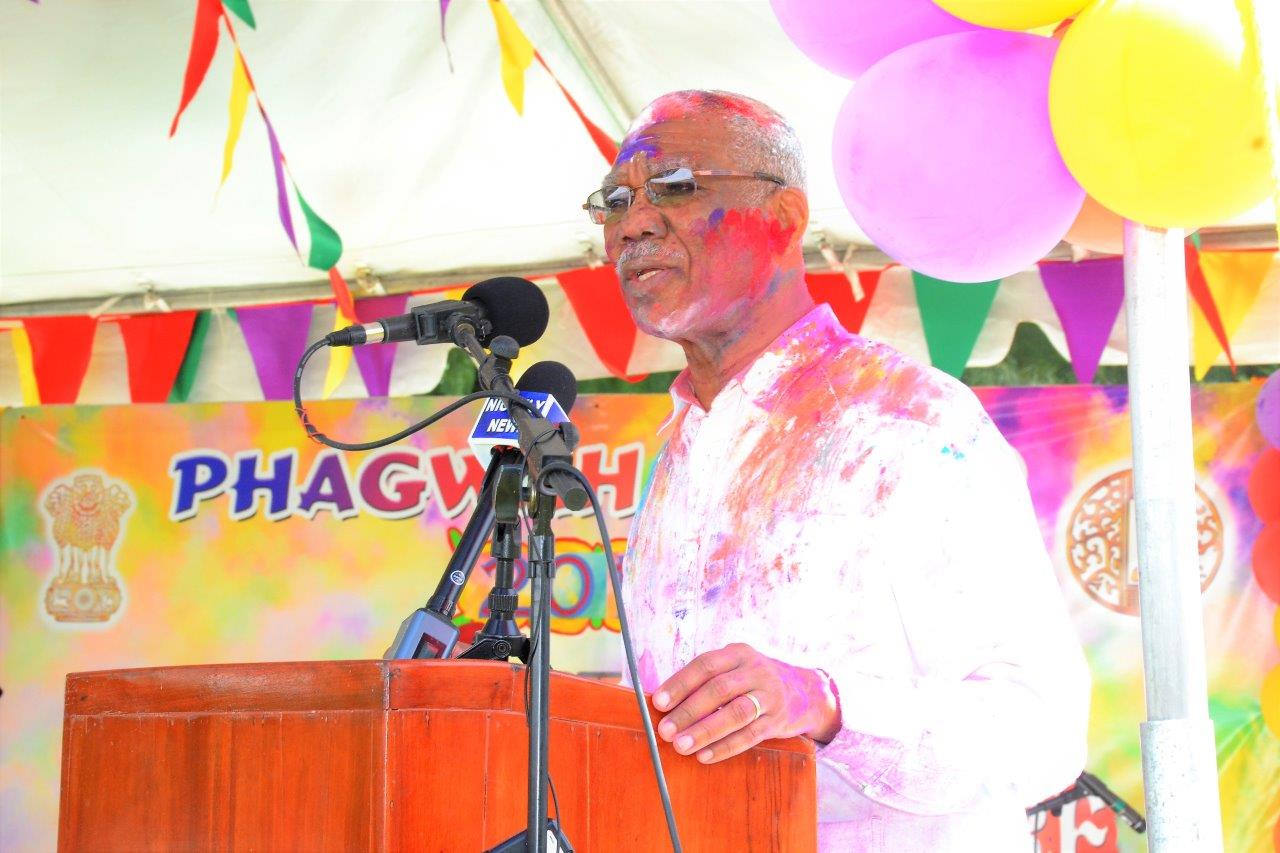 Dr. Priyanka Jain, a native of India, who is a doctor attached to the Balwant Singh Hospital and who has lived in Guyana for ten years, said that every year it is a pleasure to see people of all races celebrate Holi. “I think Guyana is a confluence of many cultures. Everyone embraces the cultures very well here so we all get together and participate in all the festivals… It shows Guyana’s culture is very tolerant and respectful and filled with fun,” she said.

Ms. Amanda Caldwell and Ms. Elisabeth Smith, both representatives from the United States Embassy in Guyana, said that they were happy to be part of this celebration. “I appreciate this very inclusive activity. We are very happy to have been invited and are able to celebrate in Guyana,” Ms. Smith said.

Mr. Koby Wills, a student, said that it is such celebrations that show just how diverse Guyana’s culture is. “It is good that we are all celebrating as one and be one big happy family even with a celebration that has its religious roots,” he said.

International choreographer, Mr. Jayanti Bhagawati, a native of India, said that it is heartening when people come together as one to celebrate such holidays, as he has seen happening in Guyana. “ I have seen people of all races celebrating this holiday and it is good that people can come together as human beings to celebrate as one,” he said.

The programme included a rich mixture of cultural presentations, including a tabla percussion, Indian songs and dances, steel pan renditions and performances by the National Dance Company, among others. It was also attended by Prime Minister Moses Nagamootoo and Mrs. Sita Nagamootoo, former Presidents Mr. Donald Ramotar and Mr. Sam Hinds, other Ministers of Government, Members of Parliament and Members of the Diplomatic Corps.