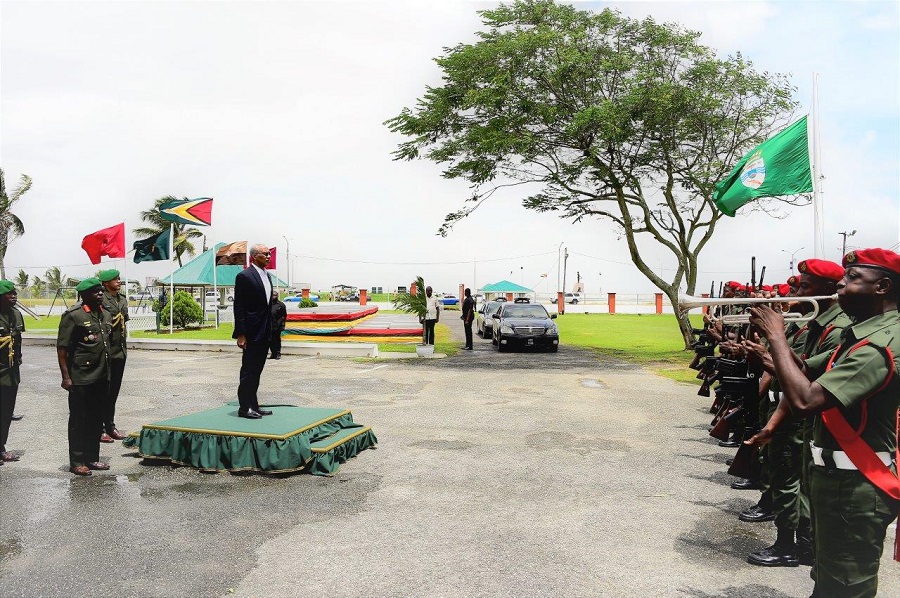 Georgetown, Guyana – (March 9, 2017) President David Granger outlined a tripartite approach to dealing with security threats, both internal and external, which would include: national self-defence, regional inter-dependence and international assistance and reinforced that the Ministry of Foreign Affairs has always been and will continue to be, the country’s first line of defence with the aid of bilateral and multi-lateral agencies and regional mechanisms. He was at the time speaking at the Guyana Defence Force (GDF) Annual Officers’ Conference held today at Base Camp Ayanganna under the theme, “Effective Transformation for Total National Defence’.

With regard to internal threats, the Commander-in-Chief urged GDF ranks to be remain watchful to ensure that societal stability, law and order and security are maintained at all times. “Threats might arise, however, from elements who wish to undermine internal security. Reckless remarks about an uprising and provocative calls for the mobilisation of foot soldiers have the potential to rip apart the fragile fabric of social cohesion that we enjoy.”

The President pointed out that in spite of Guyana’s extensive borders, complex terrain and poor infrastructure in the hinterland, which makes deployment extremely difficult, the GDF and citizens at large must remain vigilant, particularly since the ‘green state’ transition on which the country has embarked, could give rise to illegal activities such as pollution of waterways and damage of protected areas. 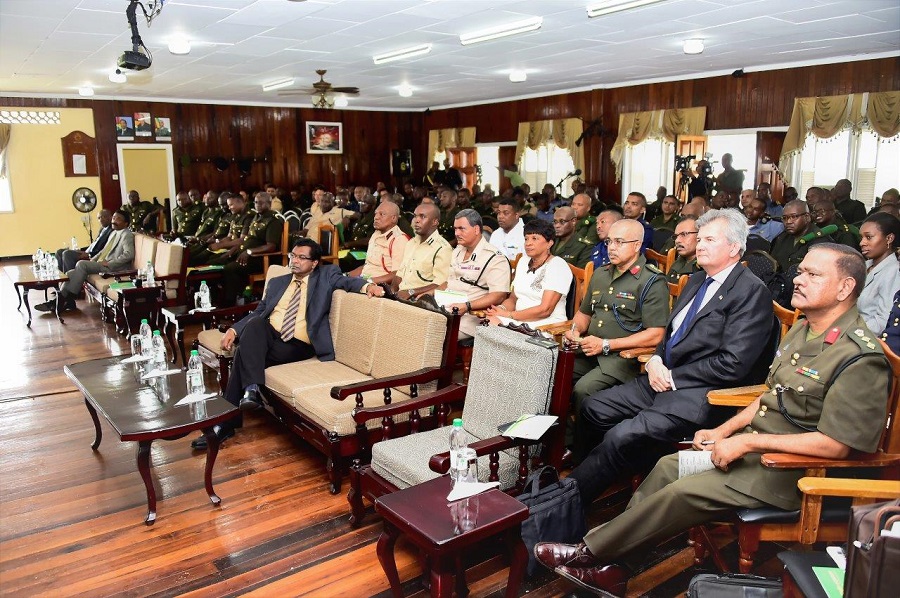 A section of those present at the annual Officer’s conference

“The Force shares responsibility for exercising guardianship over our fauna, flora, marine and natural resources…“The doctrine of total national defence, consequently, must be erected firmly on four pillars – military, civil, social and environment – of defence. These pillars, clearly, cannot be buttressed by the Force alone, or even by the Government. National defence doctrine must emphasise the importance of every citizen taking personal responsibility for our national patrimony,” President Granger said.

Recognising the GDF’s limited human and financial resources and in keeping with the provisions of the Defence Act, the President spoke of the important role, which the reserve force plays. He explained that by mobilising reserves, sections could be built into platoons, platoons into combat teams, combat teams into battle groups and battle groups into task forces and in so doing, a small Force can be made stronger. Moreover, the establishment in all of the administrative regions will ensure better surveillance and response. 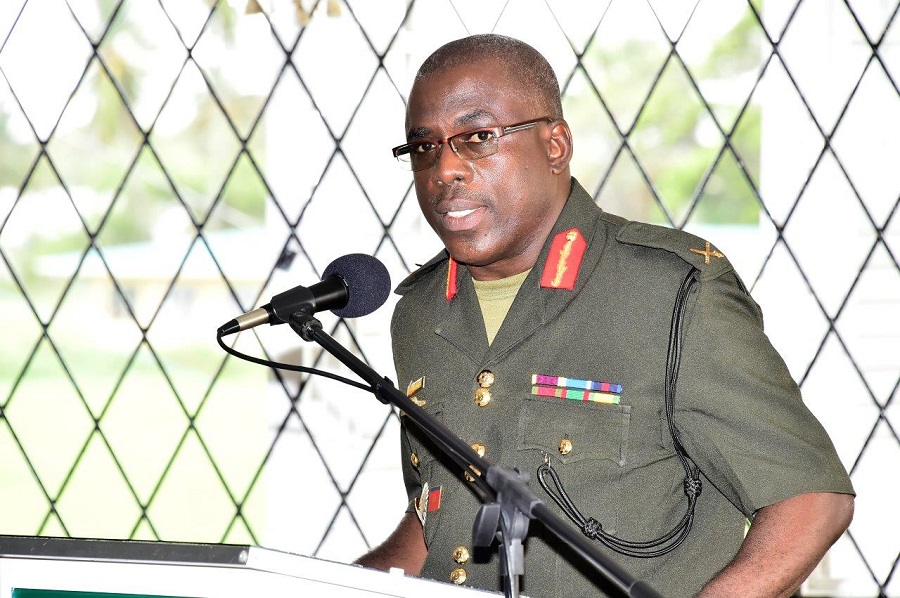 “It was never the intention of the framers of the [Defence] Act that the reserve force should be dissolved, diminished or discountenanced. The doctrine of total national defence, therefore, must be holistic and comprehensive… The doctrine of total national defence, secure on the four pillars of military, civil, social and environment defence, and emphasising the importance of every citizen taking personal responsibility for national patrimony, is the surest means of defending Guyana,” the Head of State said.

Meanwhile, Chief of Staff, Brigadier Patrick West said that even the most modern, well-equipped, well-provisioned and well-trained armed forces in the world are not insulated from change and the GDF is no different. As such, he urged the ranks under his command to be open to organisational transformation and new technologies as the Force moves forward.

“We must embrace change most passionately…this concept of total national defence incorporates both the regular and the reserve forces of the GDF. Its main operational objective is to train units and individuals, who can perform their duties in defence of Guyana. It involves all sectors of the State and the Guyana Defence Force will ensure that it works under the guidance of the Defence Board to ensure that the dreams and realities of a safe and secured Guyana are realised,” the Chief of Staff said. 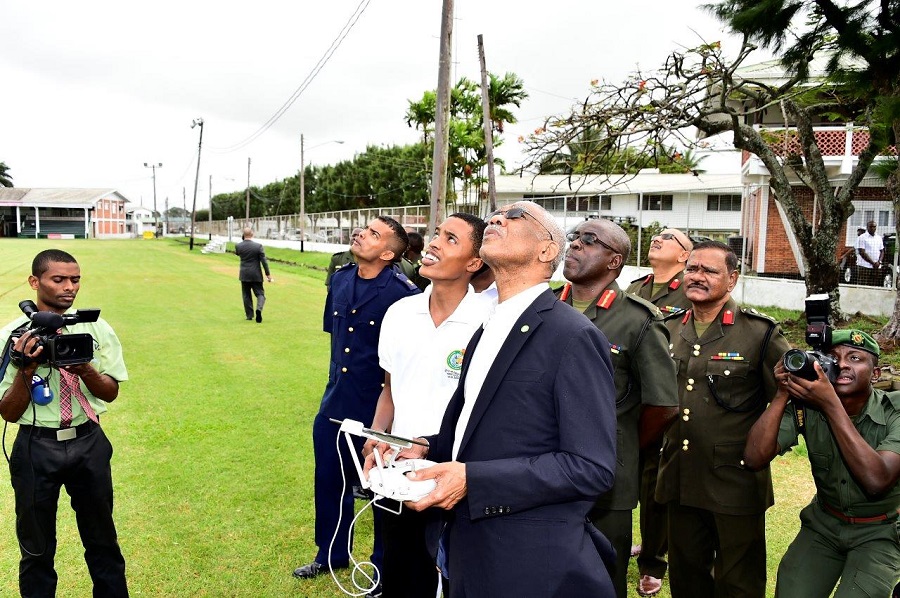 He explained that the adoption of a policy of total national defence would require a higher degree of inter-agency cooperation that what obtains at present to combine defence with diplomacy, economic development with law enforcement and civil authority with the Defence Force. He added that in order to ensure that sustainability of this policy, the Force’s transformation must be driven by intelligence, the economy and technology.

“We must pledge to maintain our focus on the mission while at the same time, remain fervently entrenched and rooted in our traditional regimentation, training and discipline, which represent the hallmark and bedrock of militarisation,” Brigadier West said.