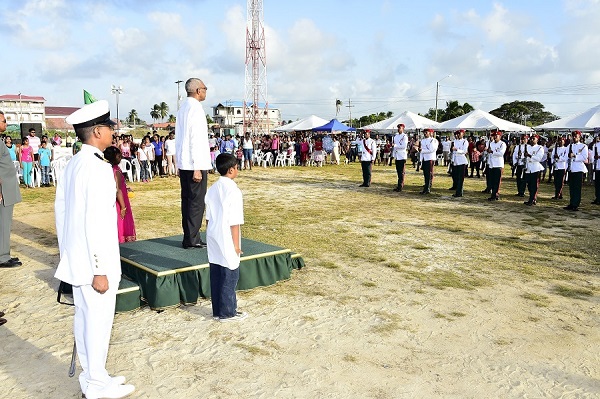 Georgetown, Guyana – (March 5, 2017) President David Granger said that the celebration of the centenary of the abolition of Indian indentureship is a timely tribute to the recognition of the struggles of the fore-parents of Guyanese of Indian ancestry and is a fitting foundation for the building of a more cohesive nation. He was at the time addressing a large crowd at a Mela and Cultural Show held this evening at the tarmac of the Leonora Synthetic Track and Field Facility. The event was organised by the Hindu Swayamsevak Sangha (HSS) in collaboration with the Guyana Indian Indentureship Abolition Association. The Government of Guyana also made a significant contribution to funding the event.

The President urged Guyanese of all origins to come together to commemorate this significant milestone, which marks the closure of a dark chapter in the country’s history. He said that Indian indentured immigration transformed the culture, the demography and the political economy of what was then British Guiana. “Indians turned the tragedy of separation from their motherland into the triumph of settlement in their adopted homeland. They responded to the challenge of indentureship by recreating familiar conditions relevant to sustaining their existence. They cultivated, also, respectful relations with other peoples they found here,” President Granger said. 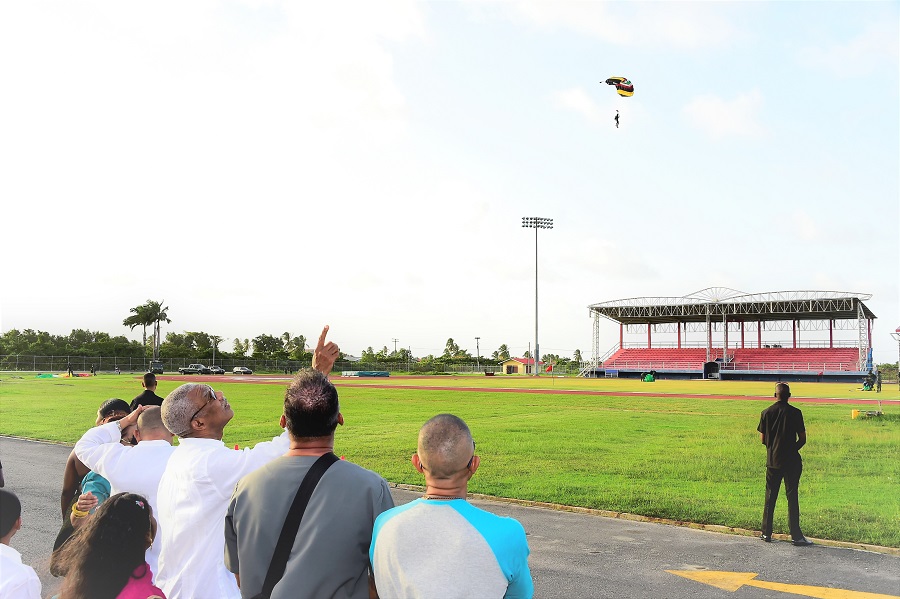 The Head of State pointed that indentureship was akin to human trafficking and if it was still in existence today, those responsible for this oppressive system would have been jailed. He also reminded of the brutal murders that occurred in various parts of the country when Indians started to resist the abuse and brutality. He said that the coastland is littered with memorials to the martyrs of riots including at Devonshire Castle, Enmore, Leonora, Non Pariel, and Rose Hall. The latter will be commemorated on March 13. 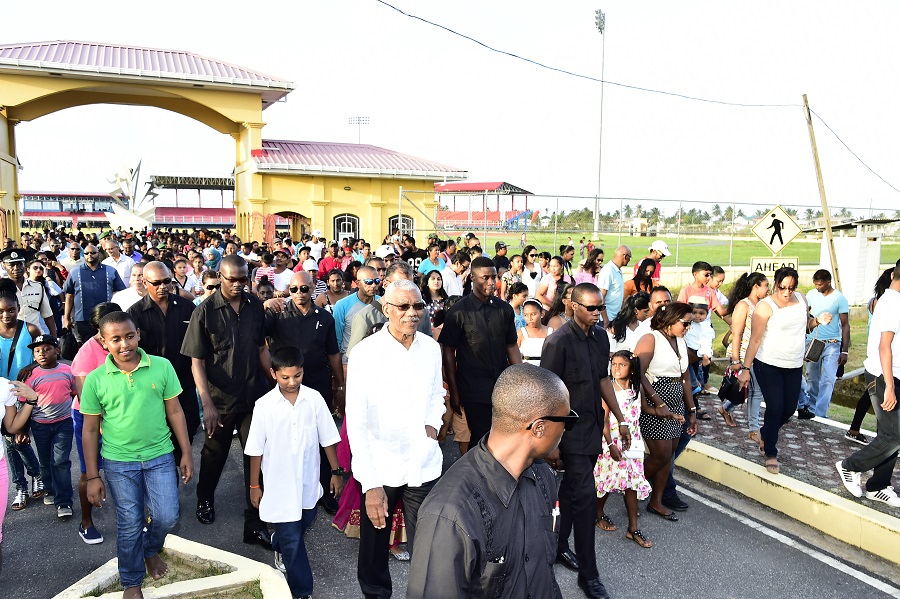 After looking the paratroopers in action, President Granger leads the large crowd back to the tarmac

“The mortality rate of the immigrants during the long journey on the ships from the East Indies to the West Indies was high. Working conditions on the plantations were appalling. Indentured labourers were victims of low wages and high mortality rates. Indians overcame the brutalities of the plantation by virtue of their resilience. They resisted but they persevered… They expanded their own income-earning activities in agriculture, business, politics and the urban professions. The end of Indian indentured immigration saw Indians expanding their presence in all areas of our country’s culture, economy, politics and social life,” President Granger said.

The eight decades from 1838 to 1917 saw almost 240,000 Indians arrive in Guyana. The majority, about 70 percent, opted to remain in Guyana at the end of their indenture. The President said that the decision to stay and make this part of the world their home allowed the immigrant mentality to gradually give way to citizenship identity. 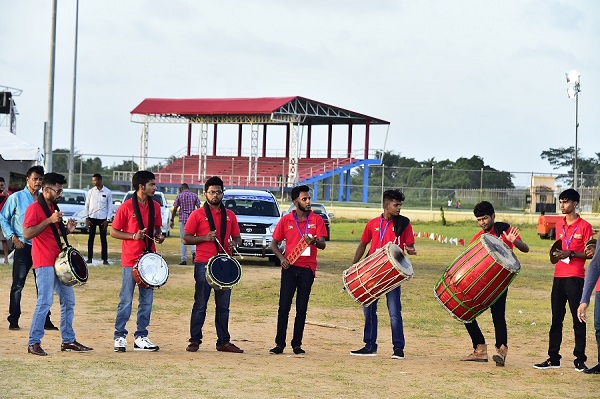 Members of the Dynamic Tassa Group entertaining the crowd

“The abolition of Indian indentured immigration bequeathed a rich legacy of resilience, of the retention of cultural values and of the recognition of the need to live together in a shared a common space on the basis of mutual respect. We celebrate the contributions of persons of Indian ancestry to the development of our country,” the Head of State said. 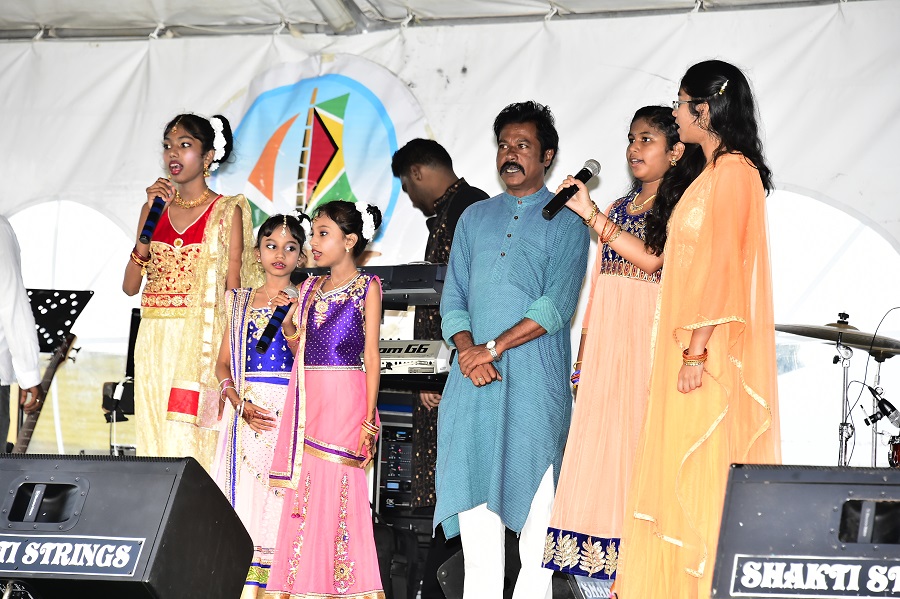 Meanwhile, Parliamentarian Mr. Irfaan Ali, who spoke on behalf of the People’s Progressive Party/Civic, urged citizens to use to milestone to contemplate how far they have come as a nation and where they would like to be. “It is the responsibility of all of us, to act collectively to ensure that the foundation that was laid by those who came before us, is not destroyed,” he said.

Head of the HSS, Mr. Ravi Dev spoke in details of horrors of the indentureship system. He also spoke of the contributions of the freed African slaves, who left the plantations after 12 years and began the Village Movement, which laid the foundation for democracy in Guyana. 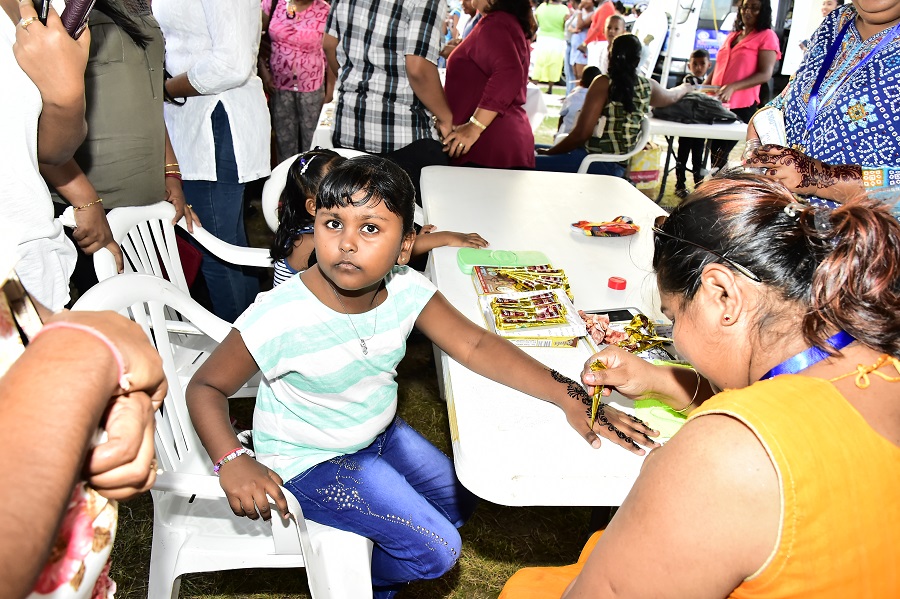 This little lady getting henna designs done on her hand ​

Apart from the informative presentations made by the speakers, the crowd was entertained by paratroopers from the Guyana Defence Force (GDF) and a packed cultural programme, which celebrated the Indian art forms. The evening’s proceedings ended on a high note with a spectacular fireworks display put on by the GDF.