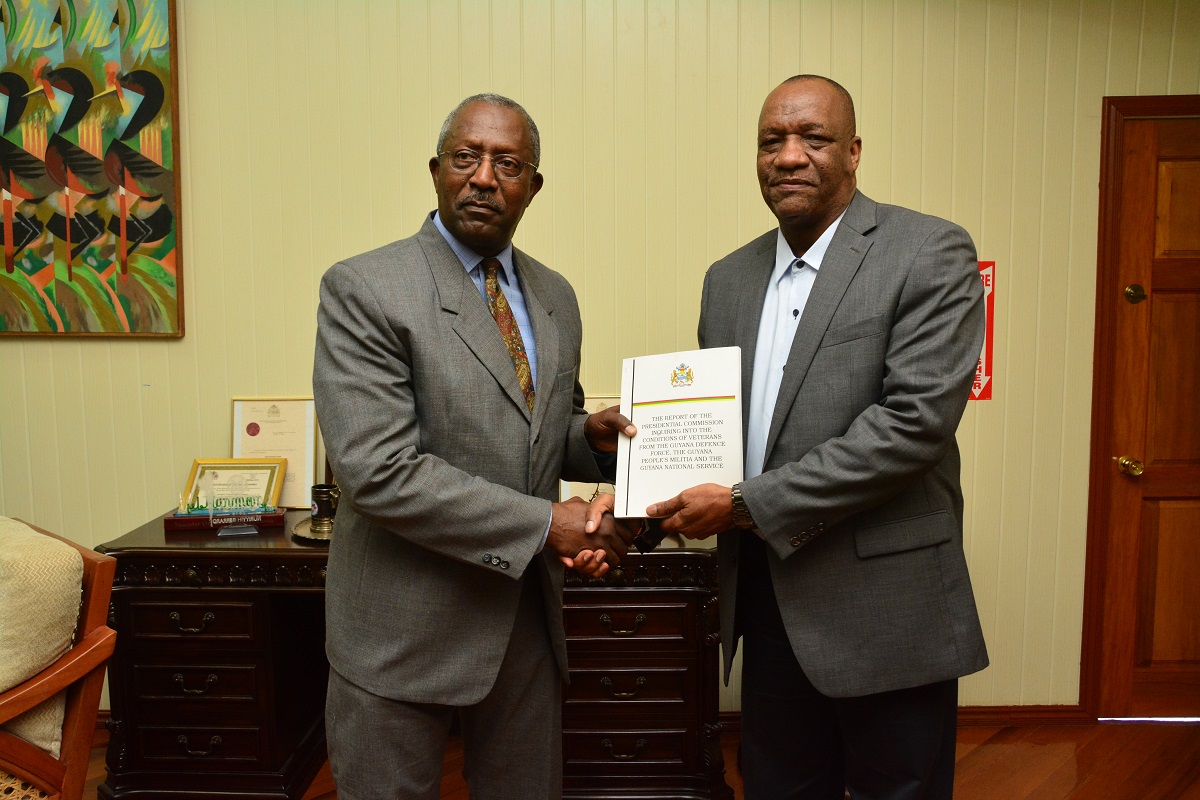 Minister Harmon, in accepting the Report from Colonel Roberts at the Ministry of the Presidency today, said that the Government is fully committed to examining the recommendations contained, with a view of implementing them as far as practicable.

“His Excellency the President, while we were in the Opposition as the Leader of the Opposition, did in fact move a motion in the National Assembly speaking about the conditions under which veterans live. We feel when you look around and you look at the conditions under which veterans live, [these] conditions need to be examined and that was the whole purpose of this inquiry. Going forward we need to look carefully at the recommendations that were made in the inquiry and try to implement them as far as practicable and as far as possible,” he said.

Minister of State, Mr. Joseph Harmon receiving the report from Colonel Desmond Roberts at the Ministry of the Presidency, earlier today.

The Government, he said, is thankful to Colonel Roberts and his team for the efforts they have put into finishing the Report, since the team had moved all across the country to be better able to speak to veterans and produce a comprehensive report.

Meanwhile, Colonel Roberts, in an invited comment, said that while the Report could have been brief, he decided that true reality of the conditions of the veterans should be reflected in the Report and as such, the team embarked on a countrywide mission.

“What happened is that we decided to go and meet people so rather than just speak to the senior people we decided to speak to people who are actually in the field. We spoke to veterans, we spoke to organisations, we spoke to almost 200 people so it was a quite interesting exercise and we had all kinds of problems, all kinds of issues and we tried to put it together as a comprehensive analysis in the Report,” he said.

The Commission visited Regions One, Two, Five and Six and the main military bases (Sewayo, Stevenson and Ayanganna) to interact with and get the views of current officers. The Commission also worked closely with the Guyana Veterans Legion and the Regional Offices to reach out to as many veterans as possible, including those in the hinterland and overseas.

The Commission investigated and made recommendations in the areas of living conditions, current pension, medical benefits, injuries on the job and compensation, among others.

In 2015, at a Remembrance Day reception, President Granger announced the convening of a National Veterans’ Commission to look into the living conditions of veterans and make recommendations for improvements. On that occasion he also announced the return of a fixed annual State subvention for the Guyana Veterans’ Legion.

The Head of State is firmly of the view that young military officers must know that they can look forward to a comfortable and dignified retirement.