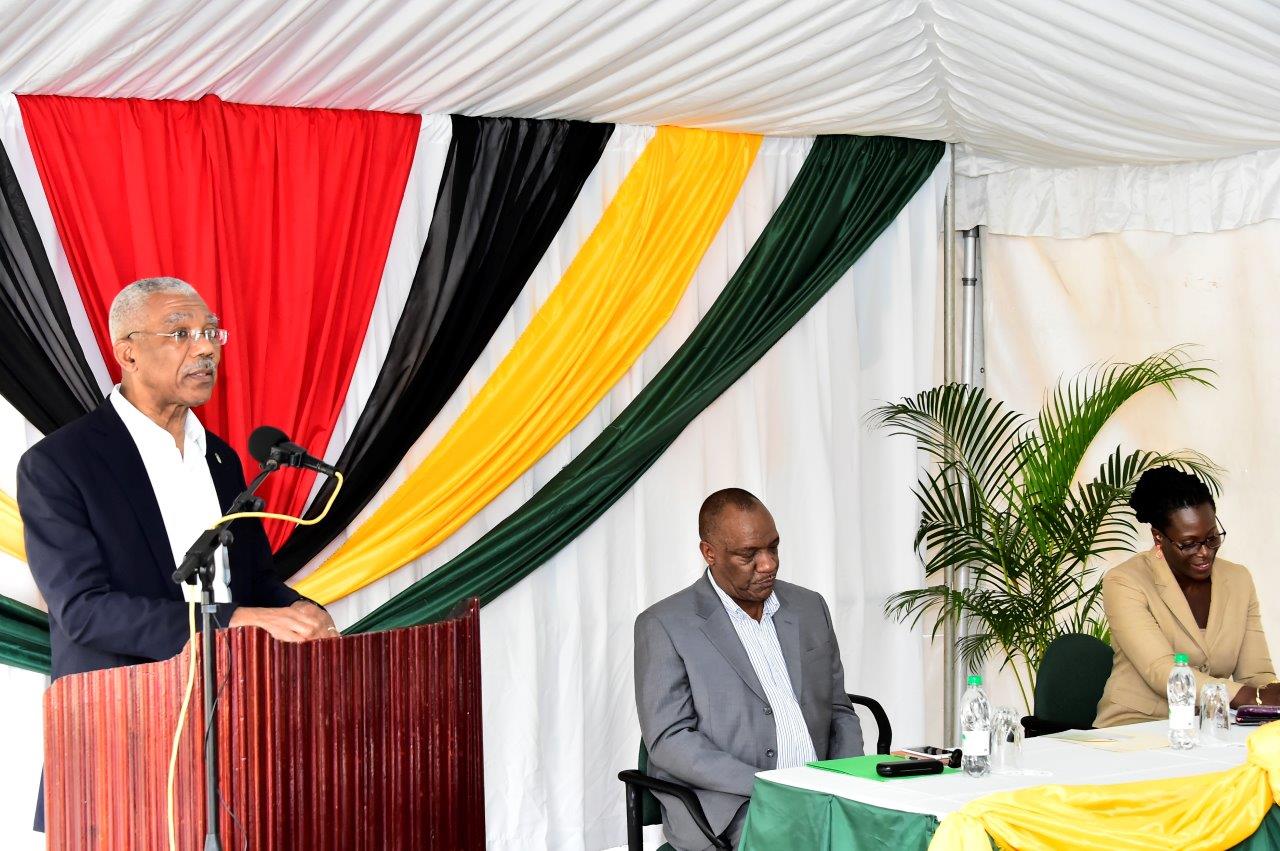 Georgetown, Guyana – (March 1, 2017) The Department of Environment (DoE) was officially launched, today, by President David Granger with the charge that it must seek to ensure that Guyana achieves the objectives of a ‘green’ state in the shortest possible time even as the world continues to grapple with the effects of global warming and climate change.

President Granger, in delivering the feature address at the event, said that the Department, which was first introduced to the nation on ‘National Tree Day’ on October 1, 2016, is central to Guyana’s transition towards a ‘green state’. The Department, he noted, will be tasked with the development of a plan of action to ensure the achievement of the green agenda. It will ensure that all the agencies concerned with the environment and sustainable energy generation play their part in Guyana’s transition towards a ‘green’ state.

The President said that Guyana has committed to placing an additional two million hectares of its forests under conservation, moving closer towards the goal of full renewable energy use and is taking specific actions to improve forest management as part of its Intended Nationally Determined Contributions (INDC) under the Paris Agreement on climate change. However, this transition will require the collective action of all agencies, authorities, boards, commissions, departments and ministries of the State.

“The Department is expected to play a pivotal role in national development. It must coordinate the work of all of those agencies, which are concerned with the environment and sustainable energy-generation – two of the principal pillars of Guyana’s green agenda. The Department will also be required to work with the other agencies to ensure that the green agenda remains on course. The Department of the Environment has work to do. The environment – our grasslands, wetlands, highlands, coastal zone, mudflats, rainforests and rivers – are under stress, or worse, under threat,” the President said.

The Head of State, who has been pushing a ‘green’ agenda since his assumption to office, said that the country needs a strong permanent institution to conserve, protect and sustainably manage the resources with which it has been bestowed. This he said, is where the Department of the Environment will be required to play an integral role.

“This country possesses a powerful resource, which, if it is to be effectively managed, requires national cooperation and coordination. The Department of the Environment was established as a separate entity to keep abreast with current global environmental conventions and regional and national practices. It is meant to project Guyana’s role and protect Guyana’s place within the Guiana Shield. We have given centrality to its role by making it into a separate department within the Ministry of the Presidency. The Department of the Environment will end the “ad hocery” which used to characterise the environmental and sustainable energy sectors,” he said.

Further pointing out the role of the Department, President Granger said that upon taking office, it was discovered that there were a number of agencies without the means or mechanism to collaborate, coordinate and cooperate with each other and this would have led to disjointed environmental stewardship and energy development. It is expected that the Department of the Environment will remedy this problem and allow for a sharper focus on the environment.

“It will facilitate all the institutions within the environmental and sustainable energy sectors working towards the objective of the creation of a ‘green state’. The Department of the Environment, in this regard, will enhance cooperation and coordination among and between the Environmental Protection Agency, Guyana Energy Authority, Guyana Forestry Commission, Guyana Lands and Surveys Commission, Protected Areas Commission and Wildlife Management Authority. The Department of the Environment will work, also, with Office of Climate Change, the Project Management Office and the Iwokrama International Centre for Rain Forest Conservation and Development, to fulfil our national objectives,” President explained.

Pointing out that the Department now has a home, the President said that it is expected that the building will provide the physical accommodation to allow the Department to better execute its mandate and become a hub for the heads of the agencies concerned with the green agenda.

Minister of State, Mr. Joseph Harmon, in his brief remarks, said that the opening represents a proud moment for the Government. He noted that the decision to locate this Department within the Ministry of the Presidency is an indication of the importance Government places on the achievement of a ‘green’ economy.

“I welcome therefore the establishment of this new Department and I urge the Director and staff to establish the high standards of efficiency that are expected of a department of the [Ministry of the Presidency]. I have no doubt that you will live up to those expectations in the performance of your duties as we proceed with the ‘greening’ of Guyana,” he said.

The Minister also announced that Guyana was recently accepted as a member of the Partnership for Actions on Green Economy (PAGE), an initiative, which was launched in 2013 as the United Nations Sustainable Development or Rio+20 response to the call to support those countries wishing to embark on greener and more inclusive growth trajectories. 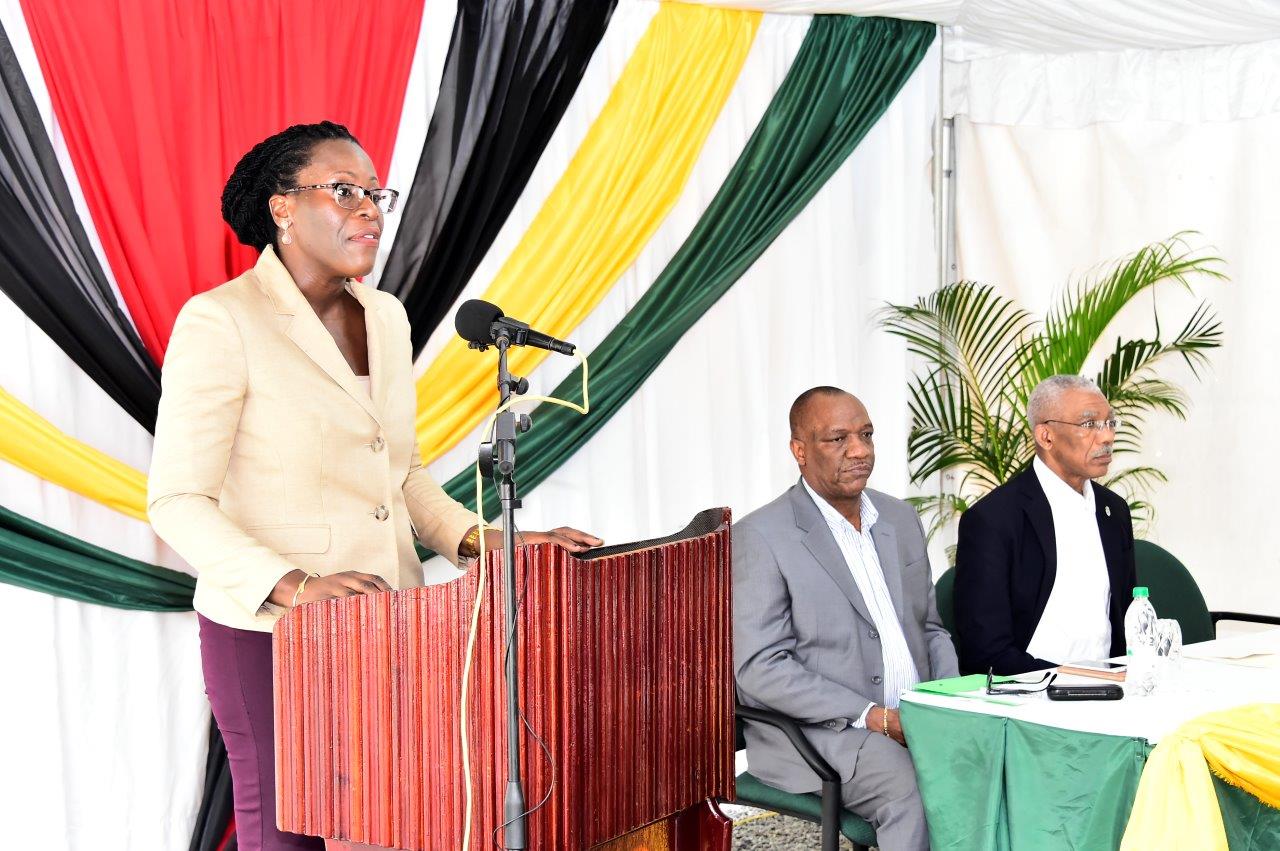 Head of the Department of Environment, Ms. Ndibi Schwiers addressing the gathering at the formal launch today

Head of the Department, Ms. Ndibi Schwiers, in her remarks said that the mission of her Department included but is not limited to the development of a robust, world-class environmental system that safeguards the integrity of Guyana’s natural environment and protects public health through the development and adoption of appropriate, sustainable and coherent policies and programmes. This system, she said, will be nurtured by utilising the best available science, information and the engagement of all stakeholders to effectively advance the environmental initiatives of the Government.

Despite just being in existence for just about five months, Ms. Schwiers said that the Department has already piloted wide stakeholders’ consultation as a first step towards developing a framework to guide the development of Guyana’s Green State Development Strategy (GSDS). The GSDS will lay the foundations for inclusive green economic growth for achieving the Sustainable Development targets.
The Department, she said, has also taken action to establish a single management framework for environmental management in Guyana to ensure response to the country’s green, sustainable agenda, commenced assessment of agencies to ensure that they are fit for purpose and hosted a free training workshop at the Marriott Hotel on issues that relate to the emerging oil and gas sector.