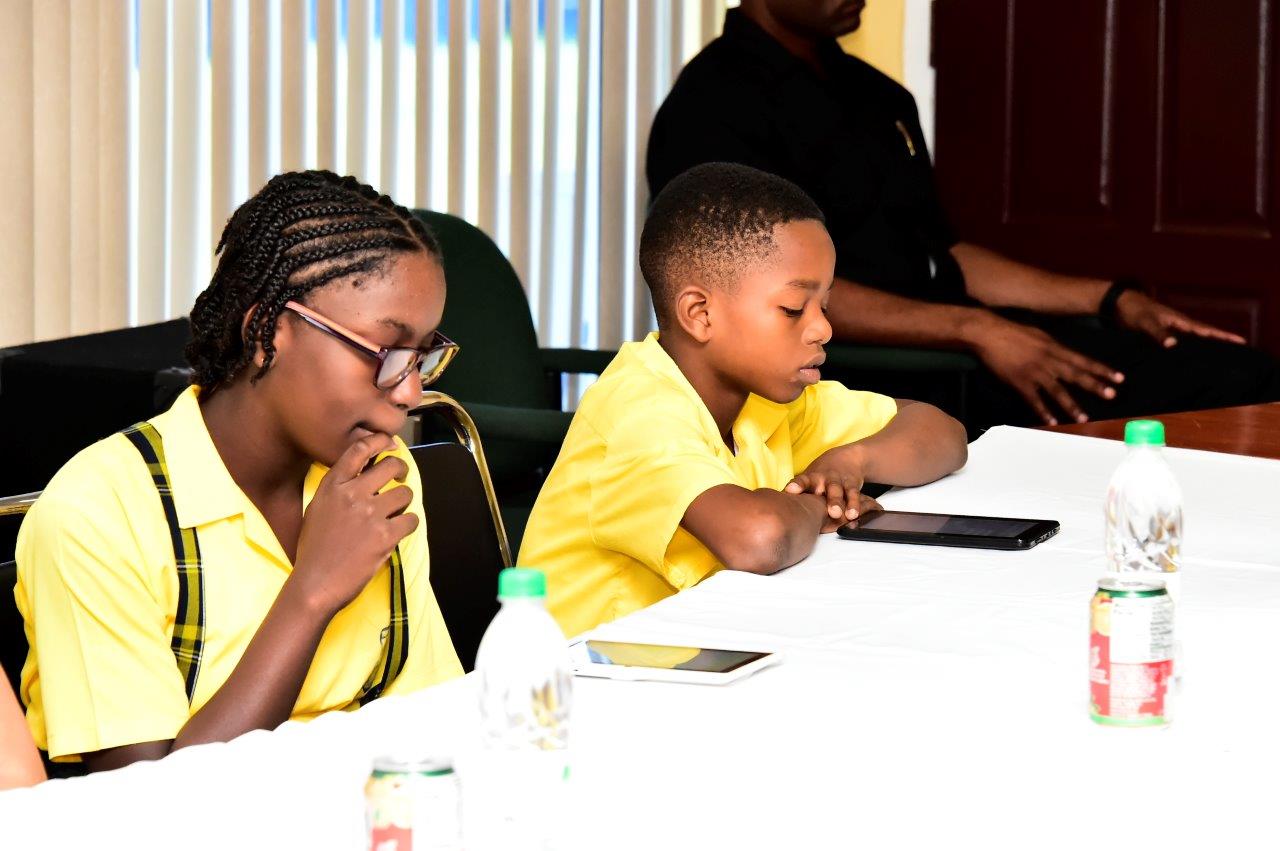 Georgetown, Guyana – (February 27, 2017) President David Granger, today, announced that through the National Endowment For Science And Technology (NEST) Programme, he will provide support for the roll out of Phase Two of the National Grade Six Assessment (NGSA) Application. The free mathematics practice and examination online application, which was officially launched today and can be found in the Google Play Store as “N.G.S.A. Practice Exams”, is an initiative of the STEM Guyana project, implemented by overseas based Guyanese, Ms. Karen Abrams and co-sponsored by the First Lady of Guyana, Mrs. Sandra Granger.

The President made this announcement after attending a press conference to mark the launch at the National Racquet Centre on Woolford Avenue and committed specifically to supporting the acquisition of 100 tablets, which will be distributed to grade five students under Phase Two for testing, which is expected to last for 14 months. “What we saw this morning with the launching of the programme by STEM Guyana is entirely in accord with government’s policy and government will support it. We will provide funds to acquire the equipment to help students to do better in Mathematics. It’s an investment. It’s not a liability. It’s not expenses. It is an investment in the children’s future,” the President said during an interview.

The President said that Government has embraced Science, Technology, Engineering and Mathematics (STEM) because it is aware of the less than desirable results over the past years at the NGSA level. “The results of the National Grade Six examinations indicated that there has been very poor performance over the years in all of the subjects but the worse performance that has been recorded is in Mathematics. In fact, it is so bad that last year; 2016 not a single child in Region Nine passed Mathematics… We established a special PEER programme for Emergency Education Reform at that level so the PEER programme is central to improving the quality performance of Guyanese children at the National Grade Six level particularly in Mathematics,” the President said.

The application gives students access to NGSA past Mathematics papers from 2010-2016 and allows them to take tests, access video lessons on the material and participate on other exercises. Phase one of the Application was conducted prior to its launch and included a pre-test phase, where 60 students from Regions 1, 3, 4, 5, 6, 7 and 10 were given the chance to test the application.

First Lady, Mrs. Sandra Granger, who sat on the panel to answer questions during the Press Conference, and who has been instrumental in her support of initiatives relating to STEM in schools, said that she is very proud of STEM Guyana for taking the initiative to create an application that provides critical support for students, who are preparing for the NGSA. In August last year, STEM Guyana launched a Lego Robotics Building and Programming Workshop for the children in the Buxton/Friendship and Lusignan/Good Hope Areas. One hundred and forty students benefitted from the workshop, which was conducted by Ms. Abrams and her children.

Mrs. Granger said, “I was very excited when she told me she was working on an App for our primary school children, which would make it simple for them to learn mathematics. So I am very happy to be part of this process of creating excitement in learning one of the STEM subjects and providing whatever assistance I can in helping our children to become enthusiastic and excited about STEM programmes and products,” The First Lady said.

When asked about the cost of the programme during the question and answer segment of the press conference, the First Lady said that the creation of the app was a collaborative effort between Ms. Abrams and her children. In fact the daughter of Ms. Abrams, Ms. Asha Christian designed and developed the application. “This is really a labour of love for [STEM Guyana] because they are using their combined technological skills to do something for the benefit of the children of Guyana… She brought in her children’s programming skills and for that I am truly grateful for and I am truly impressed by this project,” she said. In terms of content verification, an expert from Serbia and local teachers were engaged.

Ms. Abrams delivering a presentation on the application said that it also acts as an interactive platform, where students can give commendations to outstanding teachers, and schools and students can also access points based on their performance, which can make them eligible for awards in the future. She said that once the second phase is completed, the organisation will seek to create partnerships to ensure that Grade Six students in every region have internet access and tablets and other android devices so that they can access the application. Eventually, it will be expanded to include Social Studies, English and Science. Once successful, the project will be extended to the upper grades in Guyana and beyond that will be launched across the Caribbean.

While the application is still in its testing phase, it is fully available for download on the Google Play Store.

Two of the students who attended the launch of the N.G.S.A. Practice Exams App busy themselves with its features during the Press Conference.