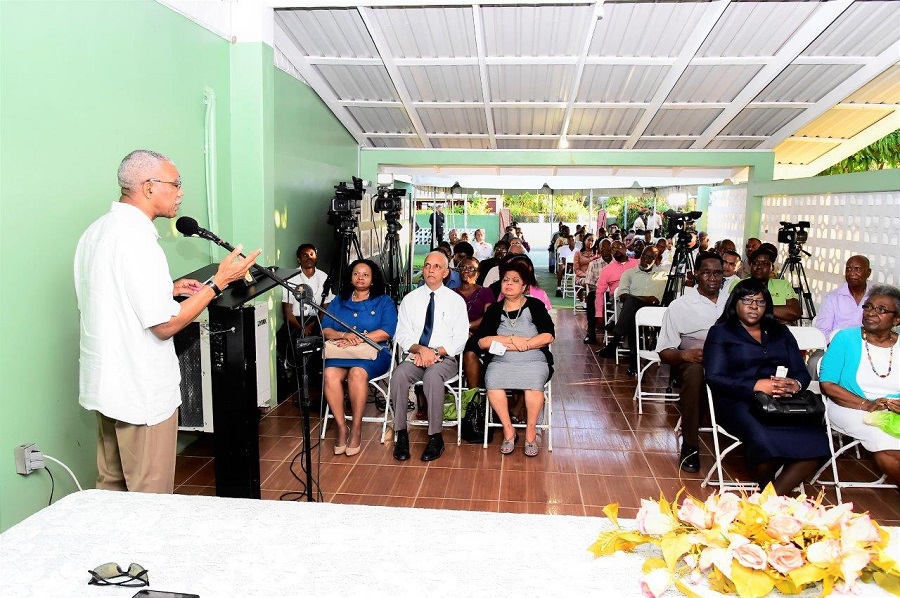 Georgetown, Guyana – (February 20, 2017) President David Granger, today, declared open the Chetwynd Learning Centre in memory of founder of the People’s National Congress Reform (PNCR) and Guyana’s first Executive President, Linden Forbes Sampson Burnham, who would have celebrated his 94th birth anniversary. The centre is located at President Granger’s former residence at Thorne’s Drive, Durban Backlands and is dedicated to the preservation and dissemination of the ideas and philosophies, which are the legacy of the Party’s founder, particularly as it relates to education. It will also house the Burnham Book Trust, the Burnham Research Institute and the Burnham Educational Scholarship Trust (BEST).

President Granger, who was accompanied by First Lady Mrs. Sandra Granger, said in his remarks that one of the main objectives of the late President Burnham was to ensure equality of access to opportunities, specifically in relation to education.

The President spoke of the three units that will be housed within the Centre and assured that his Party will continue provide educational support for young Guyanese and will endeavour to extend the scholarship programme to more children across the country and will even move beyond secondary school so that tertiary-level students can also receive this much needed support. He also said that all the literature that was penned by Mr. Burnham will be reprinted and made available at the Centre so that young people in particular can be better informed rather than fall prey to the distortions of historical facts that are in the public domain. “Nobody actually goes to the original record to find out what occurred and so that is why we need to reprint those books and that is why we need a research centre, not to publish falsehoods but so that researchers can find out what the truth actually was,” President Granger said. 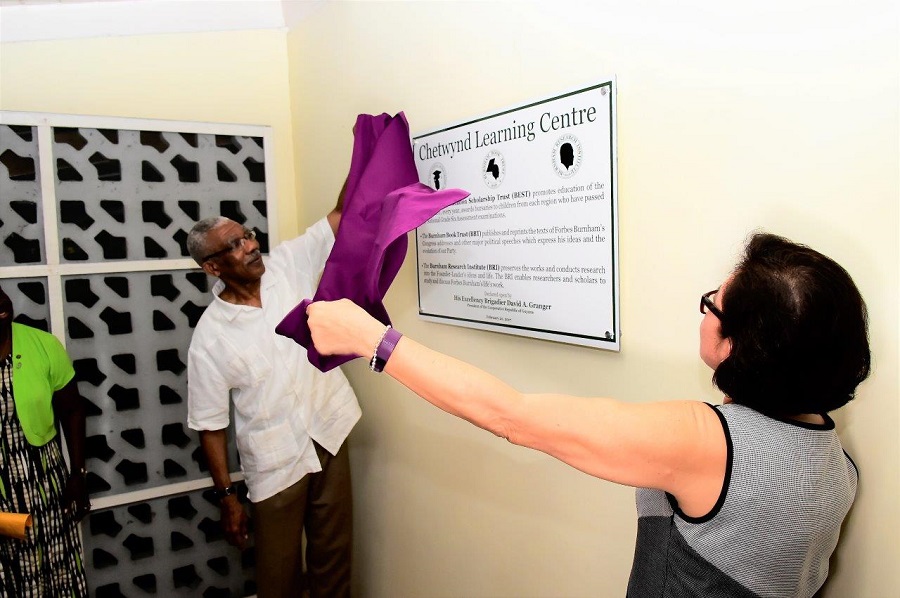 He also spoke of the dire state of the education system when Forbes Burnham took office in December 1964 and his drive to transform that broken system, eventually putting Guyana on the path of becoming an education nation. “He didn’t see education as a privilege; he saw it as an entitlement… This Learning Centre is being opened to provide a public good; it is not a political party campaign office. As our resources permit, all three agencies will be open to a wider range of Guyanese citizens. In years to come I would like to see similar centres in every town in this country…this is not a substitute, it is a supplement to the educational system,” the President said.

PNCR General Secretary, Mr. Oscar Clarke said that this project is the brainchild of President Granger, who, since taking Office, has reaffirmed the commitment of the Party’s founder to make education a central plank for the development of Guyana. He said that like Mr. Burnham, the current leader too is keenly aware that education is the cornerstone of equality and the key to eradicating poverty, ignorance and bigotry. 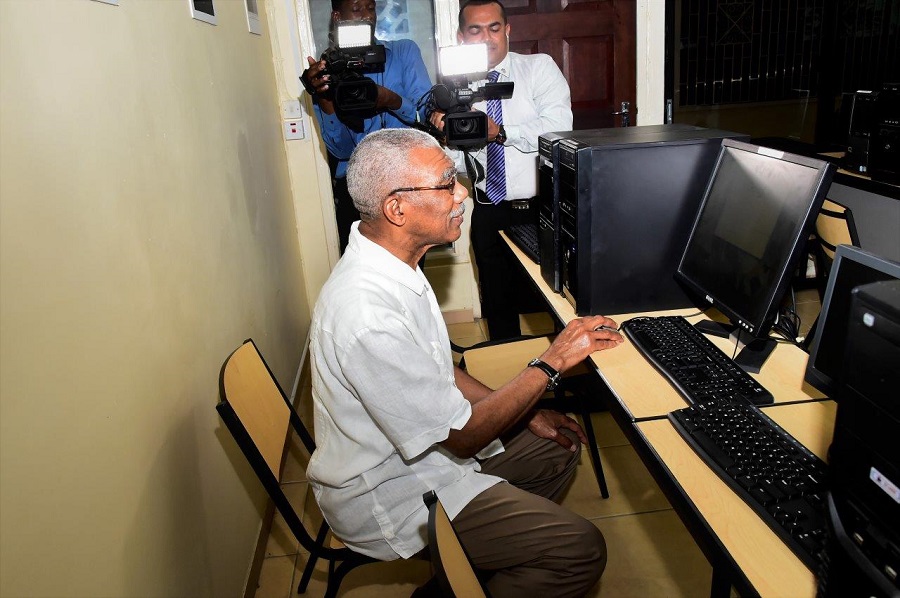 “The Party continues to be committed to the goal of creating an education nation. Our country stands on the threshold of greatness. Guyana is a land filled with opportunities to be exploited; however, these dreams cannot be realised unless we create the conditions and build the education infrastructure that produces the scientists, technicians, engineers and mathematicians to take us to modernity,” the General Secretary said.

He added that the Chetwynd Learning Centre, which is named after the father of the President Granger, will also provide information technology services to awardees of the BEST and the Sophia Literacy Project all in an effort to support the delivery of education and to provide opportunities for creative and self-empowered learning.

Meanwhile, the opening of the Centre was well-received by all, particularly the beneficiaries of BEST. Ms. Jenel Fredericks, a fifth former at the St. Joseph’s High School said that this facility will be especially useful for students, who have to do research for their School-Based Assessments (SBAs). As BEST scholarship beneficiary, she said that the support she has been receiving over the past four years has greatly eased the financial burden on her family, who reside all the way in the Upper Takutu-Upper Essequibo (Region Nine). 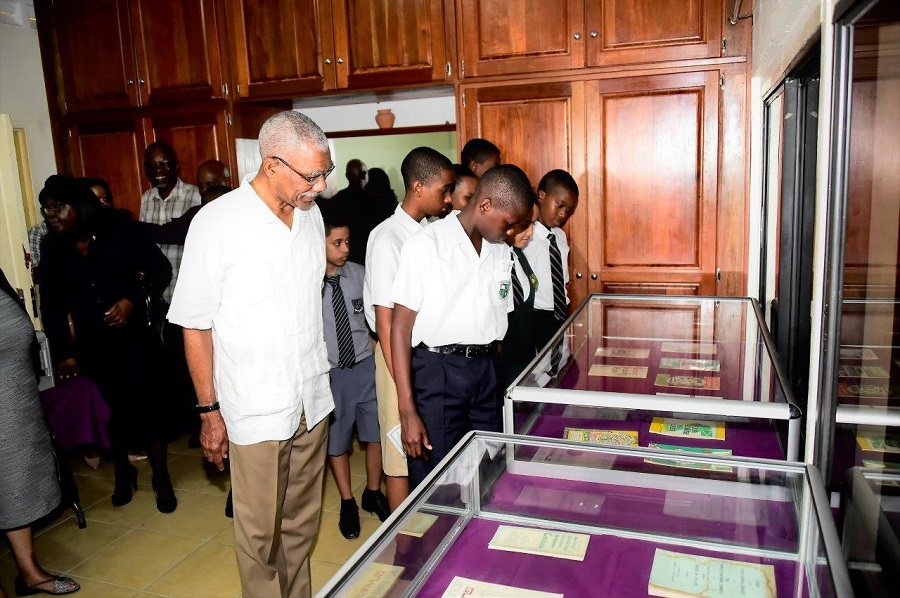 Another student, Ms. Shenez Howard, who attends Queen’s College, said that coming from a family of six children, the BEST programme has provided great assistance. “The stationery and text books that the bursary allows us to get have really helped me. I’ve seen a lot of children, who haven’t been able to get a good start like I have,” she said.

With regard to the Centre, she said that it offers a safe place for students to do research and study with their peers especially those, who do not have access to computers or internet connectivity at home.

Attorney General, Mr. Basil Williams, who chaired the programme, Minister of Health, Ms. Volda Lawrence, Minister within the Ministry of Health, Dr. Karen Cummings, Minister of Social Protection, Ms. Amna Ally and Minister of Communities, Mr. Ronald Bulkan were among those in attendance at the event