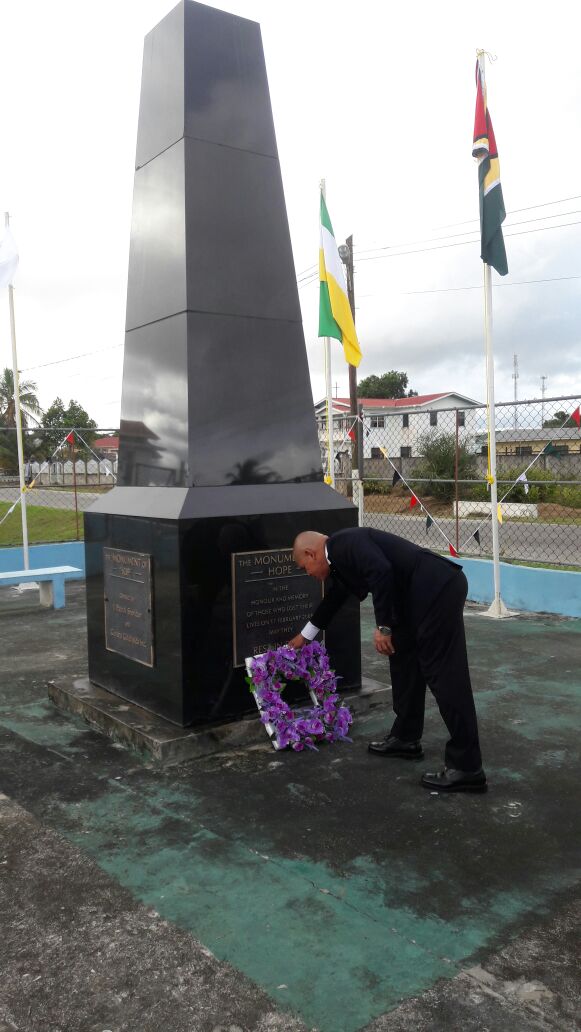 Georgetown, Guyana – (February 20, 2017) Social Cohesion Minister, Dr. George Norton on Friday last joined residents of Bartica at a memorial service, which was held in remembrance of the 12 persons who lost their lives in the Bartica Massacre of February 17, 2008.

Delivering the feature address, Minister Norton told the gathering that the horrific incident has made Bartica stronger as a community and shows that they can rise above any adversity. He also assured those gathered that the town has the support of his Ministry. “Grief is a natural response to loss and there is no right or wrong timeframe for this. The Ministry of Social Cohesion wants all of the residents of Bartica to know that they are not alone. We are here to lend any support that we can to ensure that you continue to heal,” he stated.

Minister Norton lays a wreath at the Monument of Hope, which was erected in remembrance of the victims of the Bartica massacre

The Minister acknowledged the strength and perseverance of the wives and mothers left behind by the victims, many of whom assumed the responsibility of providing for their families and holding them together. He said, “Bartica has been able to achieve a great deal over these nine years and I wish to urge you to continue working together to build community relationships in order to make Bartica the best town that it can be.”

Highlighting the fact that justice has prevailed in the courts, with the sentencing of four gunmen, who were convicted for the mass killing, the Minister said that there must never be a similar occurrence in this country. “It is certainly my hope that Guyana will never experience another mass killing and the Government of Guyana continues to work to ensure the safety of all Guyanese. Let us all live in peace and harmony in all communities and be our brother’s keepers,” he said.

Meanwhile, Commander of the ‘F’ Division of the Guyana Police Force, Ravindradat Budhram said that several measures have been put in place to ensure safety and security in the town and surrounding areas, including the establishment of several committees for the sharing of information. 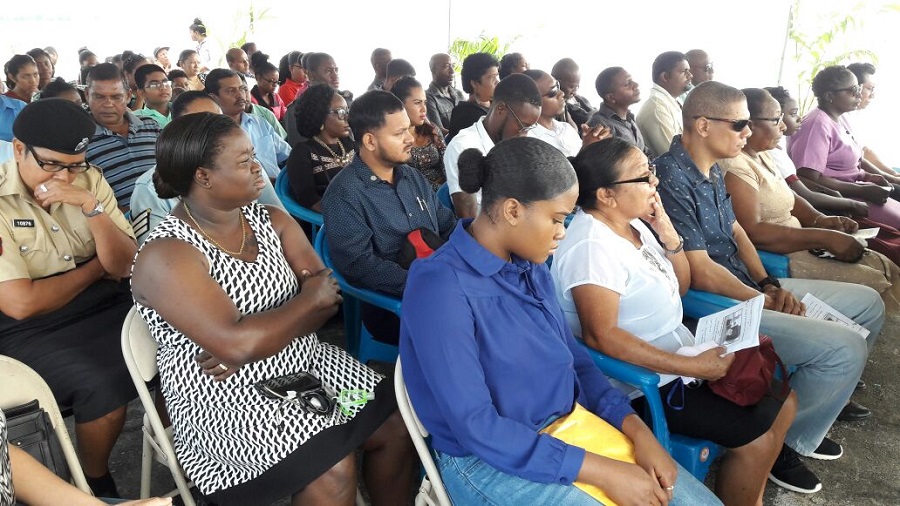 A section of the audience which gathered to remember the 12 persons, who lost their lives during the Bartica massacre of February 17, 2008

The commander said that his division has seen a lot of improvement, including the boosting of the capacity of the Bartica Police Station, which had 20 ranks in 2008 and now has over 50. He urged the residents to be forthcoming with information so that they can take the necessary action. “If you see something, you can say something, if you say something, we should know something and therefore we can stop something,” he stressed.

Mayor of Bartica, Mr. Gifford Marshall used the opportunity to urge residents to launch a movement against violence in the community. “As we strive to lead Guyana as that model town, let us model it where violence is concerned and that is, start a movement against any and every sort of violence,” he said. The Mayor said the question, which now lingers is whether or not the loved ones of the deceased can forgive those who took their loved ones from them. According to him, it is a process which they need to commence. He urged Barticians never to forget the date of the Massacre and to continue to honour those who lost their lives.

Message of Condolence from His Excellency, Brigadier David Granger, President of the Cooperative Republic of Guyana on the passing of Ms. Vivienne Inge Paula Nathoo