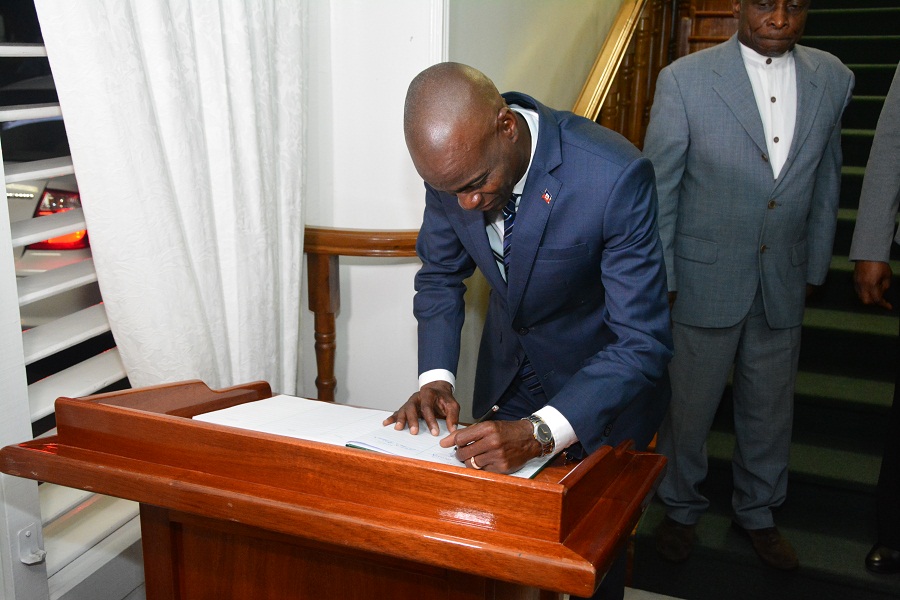 Georgetown, Guyana – (February 15, 2017) President David Granger, this evening, met with the newly inaugurated President of Haiti, Mr. Jovenel Moïse and his wife First Lady, Mrs. Martine Marie Etienne Joseph, who arrived in Guyana today for the 28th Intersessional Meeting of Heads of Government of the Caribbean Community (CARICOM). During the meeting the two Heads agreed to the establishment of a joint commission concretise and advance identified areas of cooperation.

President Granger said that there are opportunities for collaboration between the two countries in almost every sector, particularly agriculture and mineral development. The Haitian President, who was sworn in on February 7, outlined four priority areas in which his country wishes to cooperate. These are: deforestation, management of surface water/drainage and irrigation, agriculture and trade.

The two Presidents agreed that members of the Haitian delegation will meet with a Guyana government delegation, inclusive of relevant technical officers tomorrow to draft a Memorandum of Understanding (MoU), which will set up the framework for cooperation.

Address of His Excellency Brigadier David Granger President of the Cooperative Republic of Guyana to the Twenty-eighth Inter-Sessional Meeting of the Conference of Heads of Government of the Caribbean Community.