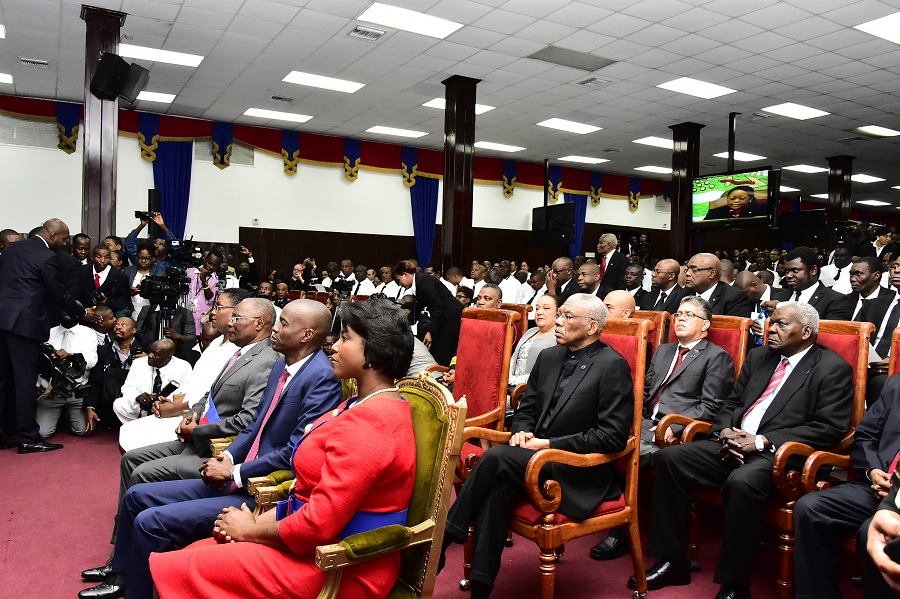 Port-au-Prince, Haiti – (February 7, 2017) Chairman of the Caribbean Community (CARICOM), President David Granger welcomes the democratic renewal represented by the Inauguration of the 58th President of the Republic of Haiti, His Excellency Jovenel Moise.

The Guyanese Head of State, who just attended the Opening of the National Assembly for the Constitutional Swearing-In Ceremony of the new Haitian President, in an interview last night, said, “The Caribbean is not only a zone of peace from a strategic point of view in terms of the absence of war but it is also a zone of Constitutional stability. There is predictability and we don’t want to see that there are elements in any member state, which disrupt the Constitutional process, [or] which use extra legal means to seize power or delay the holding of elections. There have been delays here but Haiti has finally come through and I am very happy to be here to put the stamp of approval on behalf of the entire Caribbean Community on those elections and the duly elected President Moise.”

The transfer of power ends nearly a year of transitional rule by interim President Jocelerme Privert and follows what is referred to as a political crisis, which was initiated in October 2015 when President Moise won the later annulled first round of voting, which was said to have been plagued with fraud. In February 2016, Haiti’s Parliament elected interim President Jocelerme Privert, since President Michel Martelly’s five-year term was nearing its end. The elections were finally held in November 2016 after having to be rescheduled from October because of Hurricane Matthew.

President David Granger during the Swearing in Ceremony of the new Haitian President, His Excellency Jovenel Moise. President Moise sits beside his wife Martine in the front row during the Ceremony.

The CARICOM Chairman said that his presence at the Inauguration activities represents the region’s solidarity with Haiti, noting that the country has faced major catastrophes over the past 15 years, which have resulted in significant loss of life and damage to the country’s infrastructure. “It is a matter of recognition of the democratic process. President Moise has been elected democratically and it is a matter is support for the people of Haiti generally to let them know that they are not alone in their adversity… and we will continue to stand by them. So it is very important for me as President of Guyana and of course as Chairman of CARICOM that at this moment we should show support and solidarity for Haiti,” he said.

President Granger added that with the development of the economies of the region appearing on the agenda of the CARICOM Heads of Government meeting to be held in Guyana on February 16-17, the region is keen to support the economic revival of Haiti.

He said, “The most important thing is to help the revival of the Haitian economy… We feel that Haiti has a very important role to play in producing goods for [the regional] economy and also in attracting investment from other countries… Haiti is a big market and we would like to see Haiti recover from its environmental problems as quickly as possible because what is good for Haiti is good for the community.”

The Head of State noted that in addition to natural disasters, Haiti’s economy continues to suffer from the economic effects of its struggle for Independence. “Haiti is the first Caribbean country to win its Independence. It was a long bit of struggle. I call it the 5000-day war and it was cruelly invaded by the French; by the British and by the Spanish and other mercenary forces and a lot of people were killed. And the damage done to the Haitian economy was enduring because at that time of the outbreak of the rebellion it was the single richest country in the entire world. At the end of it the economy was really very badly damaged,” he said.

President Granger also said that the members of the Anglophone and Francophone Caribbean as well as the Latin American mainland, have all been influenced and inspired by the Haitian struggle for Independence and noted that that the country is an important member of CARICOM and the region as a whole.

The Inauguration events include a mass followed by a Te Deum by His Eminence Cardinal Chibly Langlois and a lunch offered by President Moise, in honour of visiting Heads of Delegations. Last evening President Granger also attended a dinner hosted by former interim President Privert.