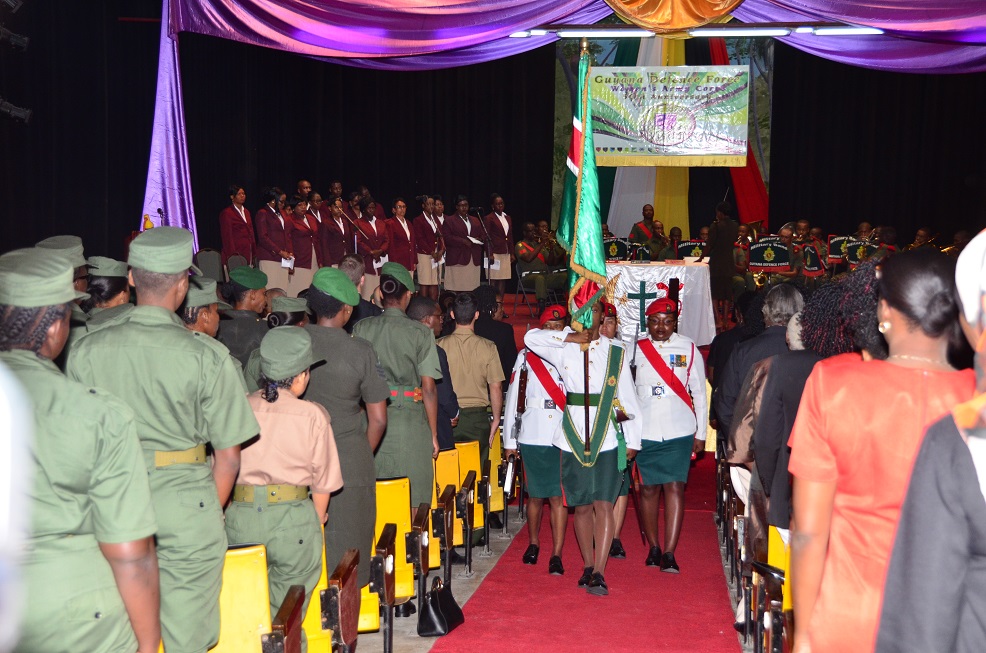 The First Lady said the formation of the Women’s Army Corps 50 years ago was greeted with some resistance since at that time, women were perceived to function in traditional roles in their homes and offices. That perception has changed and, for some time now women have pursued careers that have proven that they are capable of thinking and acting tactically, if not better, than their male counterparts in several areas of their lives.

“I believe that the time has long passed for women to be equipped to break that glass ceiling…beyond which their professional progress is denied… I believe that the hierarchy of the Guyana Defence Force is aware of the fact that more than half of our population are women. I believe that they would not wish to ignore the valuable resources at their disposal as they plan and promote the development of a modern army,” Mrs. Granger said.

The First Lady further said that during the late 1960s and early 1970s, the world saw the emergence of feminism, which led to 1975 being declared International Women’s Year. In addition, the United Nations (UN) declared 1976-1985 the International Decade for Women. This saw the adoption of a convention on the elimination of all forms of Discrimination against women (CEDAW) of which Guyana is a signatory.

“After 50 years of service to our nation, we can envision professionally-trained and equipped women participating in, and commanding infantry and Special Forces battalions… heading branches of the service and one day, becoming Chief-of-Staff of our Defence Force. This, I believe is how we can best fulfil the theme of these 50th Anniversary celebrations, ‘Celebrating our Woman; Empowering them for National Defence’…” Mrs. Granger said.

The GDF flag is carried by women soldiers in honour of the 50th Anniversary of the Army’s Women Corps.

In a message by Chief of Staff, Brigadier Patrick West, which was read by Lieutenant Colonel (Lt. Col.) Natasha Stanford, the Chief of Staff alluded to the fact that the Women’s Army Corps has made tremendous contributions to Guyana’s development in over 50 years.

Meanwhile, Apostle Michele Sobers of Destiny Empowerment Worship Centre, in her message, spoke about women’s empowerment and further urged the Women’s corps to be like the women of the Bible and stand firm in their position of authority.