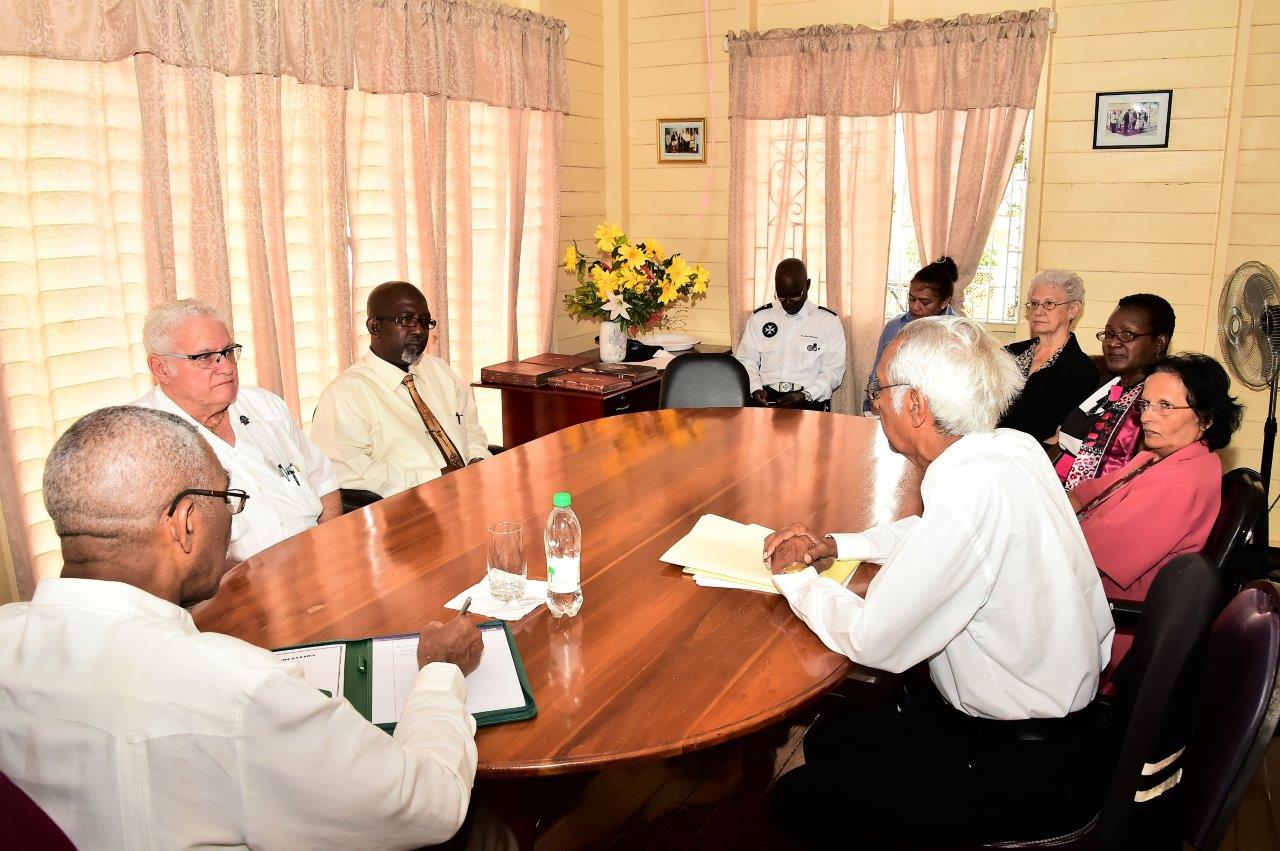 Georgetown, Guyana – (February 2, 2017) President David Granger, this morning, said that emergency medical services must be available to citizens in every region across the country. The Head of State made these comments during a meeting with Council members of the St. John’s Association and Ambulance Brigade at their office on Cowan Street to discuss areas in which the State can lend assistance.

The President, who is the patron of the organisation, said that he is committed to ensuring that the organisation fulfils its obligations and performs its functions in the public’s interest, particularly in the area of public health. For too long, the Head of State said, the organisation has been neglected and it is his mission to ensure that it once again becomes equipped to serve the average Guyanese.

“My mission this morning is to ensure we combine our thoughts and ideas to ensure that the St John’s Ambulance Brigade is financed and organised to discharge its mandate. St John’s is an underutilised resource. It has not been given the assets and resources to perform its functions effectively. I would like to add the muscle of the state to the enthusiasm and commitment of the Brigade… Public Health is a countrywide responsibility… From a conceptual point of view, I see that this organisation must accept a national responsibility,” the President told the members.

President David Granger makes a note of the recommendations and ideas, put forward by the Council of the Association

Committing his support to building and strengthening the capacity of the Brigade, the President said that every region and capital town across the country must be able to deal with emergencies. “You know better than I do the functions this organisation, through its Brigade plays especially at public events. Now we have the Durban Park and when there is an event there, there is room for volunteers to be on standby. Mashramani is coming up and these are public events that volunteers can lend assistance. We have National Days and events like the National Education Day, where there are thousands of children. So at every point of view there is a public duty to perform,” President Granger said.

Nothing that the organisation can save lives as first responders during accidents and other emergencies, the President said that the organisation can recruit volunteers in the various regions to ensure that it has hands on the ground when needed. In this regard, the President encouraged the organisation to make use of various forms of media to attract persons, particularly young people, to its work. He called for updated training to be responsive to the new challenges and diseases in the health sector but at the same time, cautioned against spreading the curriculum too wide.

“What I see eventually is the Association assisting to recruit volunteers because you are heavily reliant on volunteers and those volunteers can contribute a valuable service if they have the training and equipment. I would like to encourage and assist the organisation to develop its capabilities in Mabaruma, in Anna Regina, Mahdia, Lethem as well as the coastal regions. This is because the public health problem in Guyana is a very widespread and I am not saying that there is a crisis but Guyana has long borders and we are very susceptible to transnational diseases and diseases do not have borders. We have to be continuously vigilant against these diseases,” he said.

As the country grapples with the effects of Climate Change, the President said too that the Brigade must enhance its disaster preparedness. To do this work countrywide, the President said that he has recognised that the Association will have to be properly staffed and financed. While the State will play its part, the President also encouraged the members to work on collaboration with other agencies and commission such as the Civil Defence Commission (CDC). 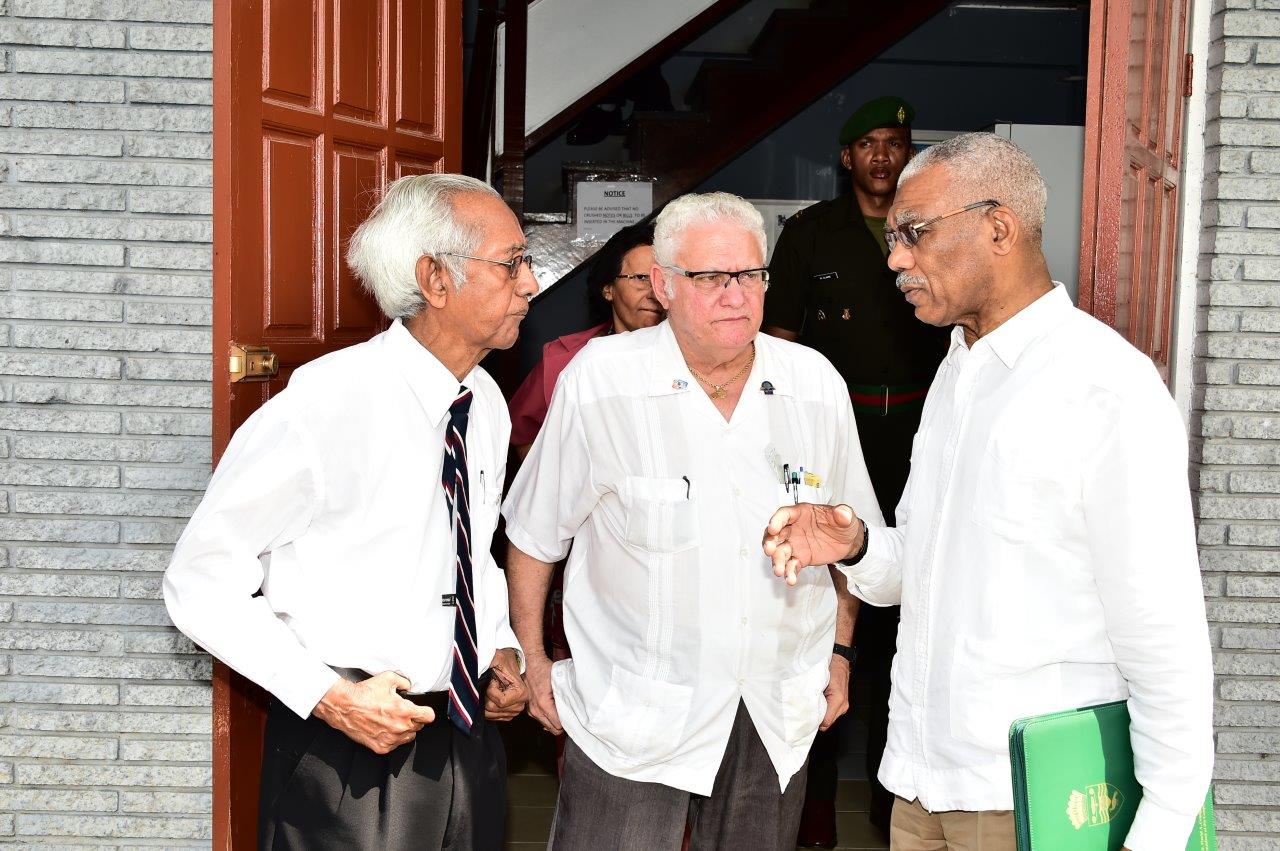 He encouraged the Association to connect with the Chairpersons of Essequibo Islands-West Demerara (Region Three), Demerara-Mahaica (Region Four) and Demerara-Berbice (Region Five), regions without capital towns, with a view of establishing Centres. Currently, most of the organisation’s work is done in Georgetown and New Amsterdam.

The Head of State also suggested that the practice of observing an Association Day be reassessed so as to give greater visibility to the works of the organisation as well as to focus on Occupational Health and Safety to ensure that workplaces are equipped with First Aid and other related services. The members of the St. John’s Association have been asked to submit a formal budget by the end of June 2017 to be considered in the 2018 National Budget.

Dr. Jose Louis DaSilva, Vice Chairman of the Association, said that the Association was grateful that the President has taken the time to meet with the Council to discuss and identify areas, which can and must be strengthened. “St. John’s goes back to 1947 so with that legacy behind us we are sure that with your points that you have delivered here to us and with your ideas, it will be well received and well thought out and well implemented in the future. We thank you,” he said.

President underscores importance of innovation during tour of BACIF