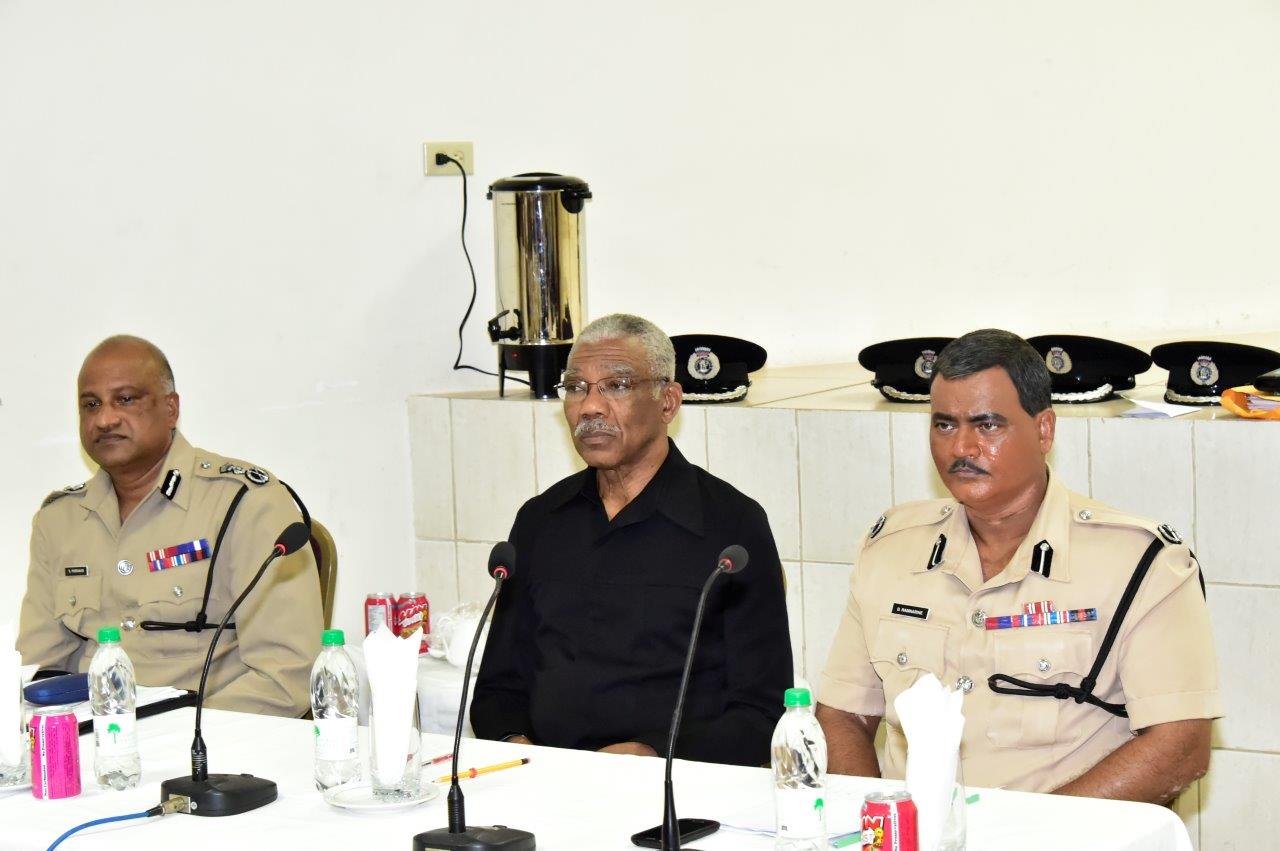 Georgetown, Guyana – (January 27, 2017) Education and training, high ethical standards and a strong sense of social responsibility, President David Granger said, are the most important principles required of the members of the Guyana Police Force (GPF) in the execution of their mandate to provide service and protection in an ever-changing and diverse security landscape. The Commander-in-Chief made these remarks earlier today at the Annual Police Officers’ Conference, which opened yesterday at the GPF Officers’ Training Centre at Camp and Young Streets.

The President said that the criteria he outlined must guide police officers and made it clear that when it is discovered officers have strayed away from these principles and are guilty of misconduct then steps must be taken to separate those defaulters from the community of law enforcement. “We must separate them so they don’t do further mischief and damage to the reputation of this great Force and don’t jeopardise the lives of their colleagues through their greed or through their folly… I am sure that there are good officers than bad officers. I haven’t come here to accuse you. I’ve come here to encourage you to embrace security reforms,” he said.

The reforms the President referenced include those that will be realised through the implementation of the United Kingdom funded Security Sector Reform Programme (SSRP). Already British Senior Security Sector Reform Advisor, Mr. Russell Combe has arrived in Guyana to assess and advise on security strategies.

“Change is continuous and change is compelling. What was good for 1996 may not have been good for 2006. What was good for 2006 definitely was not good for 2016 and what we need for 2017 may become obsolete in five or ten years’ time. The nature of crime, particularly trans-national crime, demands new attitudes and techniques… We have to continuously reform the criminal justice system if we are to protect our citizens from violent crimes,” he said.

The President also lamented the high incidence of inter-personal violence, which often results in the commission of a serious crime. Against this background, he pointed out that the programme of reforms must address the need to professionalise the Force and strengthen its leadership so that it is repositioned and ready to effectively deal with threats to public safety and security in all its forms. “Continuous reform is imperative to allow the Force to remain relevant, to rebuild public trust and, together with the government, citizens and civil society, to make our country safer and more secure. It is not to build big stations; it is to ensure that every citizen is safe. The ultimate objective of our policy is to ensure that every citizen is safe – safe from anti-social behavior, from crime, from disorder and traffic accidents,” President Granger said.

He assured of his Government’s commitment to providing the support needed to ensure human safety for all citizens and the national security of the state in order to create the framework for national development.

According to the Head of State, the reforms will entail crime prevention through improved intelligence and pro-active deployment, protection of victims and vulnerable groups from criminal behaviour or disorder, the promotion of greater public confidence in officers through ethical conduct and the promulgation of measures aimed at building the Force’s capacity and capability. 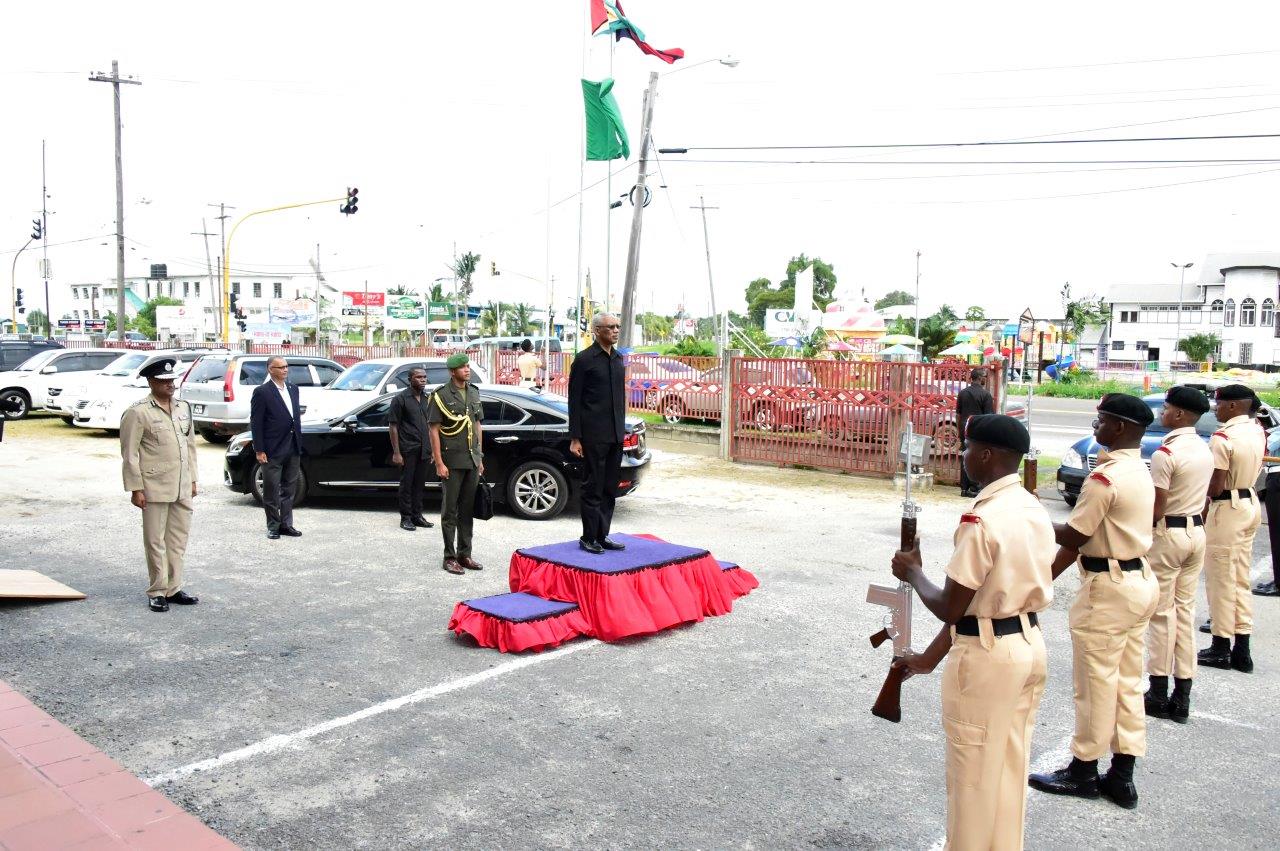 Commander-in-Chief, President David Granger receiving the salute from ranks of the Guyana Police Force upon his arrival at the Police Officers’ Training Centre

He explained that in order to combat crime, law enforcement must first determine and understand causation. Here he spoke of the secondary impact of criminal activities on communities. The President believes that the country is still reeling from the impact of the crime wave of the early 2000s, which is now referred to as ‘the troubles’. That period spawned the emergence of drug cartels and phantom squads, who themselves, were involved in the murders of more than 1400 citizens between 2000 and 2009. “Police officers need to understand this period, because at no other time in the history of the Guyana Police Force were so many Police Officers killed on duty… It must not happen again… We know that there were problems but let us not assume that those problems have gone away or that they cannot recur,” President Granger said.

He told the conference that over the last 20 years numerous attempts were made at reforms in the GPF, but those plans were never conscientiously implemented and as a result, Guyanese paid a heavy price. The earliest attempts at initiating reforms started back in 1999 the United Kingdom Regional Advisor, Mr. Paul Matthias visited to discuss security assistance from Britain. This was followed by the Symonds Report and the establishment of the National Security Strategy Organising Committee in 2000. In 2002, the Border and National Security committee, the National Consultation on Crime and the National Steering Committee on Crime were established.

In subsequent years, legislation was passed, more crime fighting bodies were established and the initial version of the SSRP was signed but was later scrapped by the then Government. “This is not the time for coulda, woulda and shoulda. We know what we have to do. We now have in 2017 to move forward. It is a time for what we will do. It is a time to introduce real reforms that will transform the Force. The past should offer lessons for the future. Mistakes, which have been made, must be corrected and avoided in the future,” President Granger said.