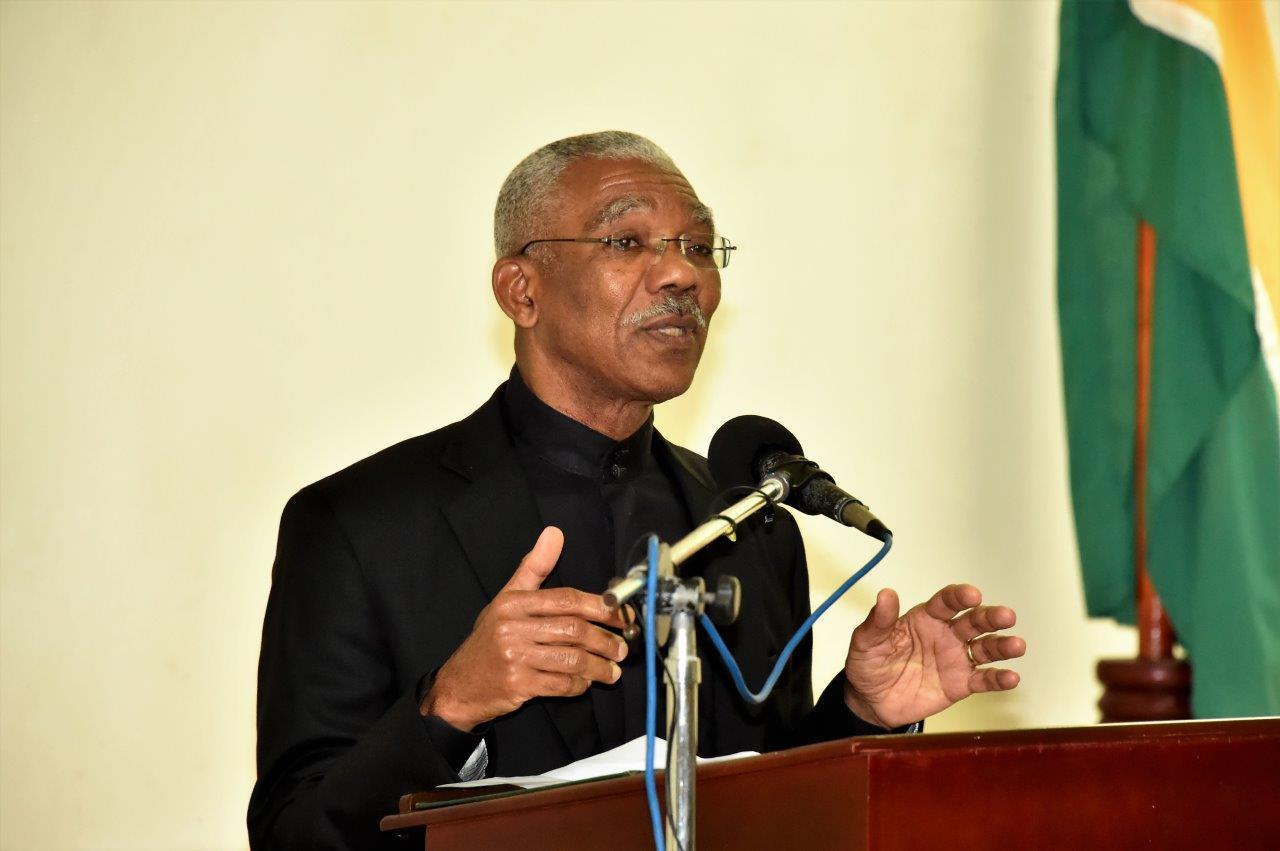 Georgetown, Guyana – (January 18, 2017) President David Granger said that his Government is committed to reversing the indifference shown by the previous administration towards the incidence of Trafficking in Persons (TIP) by enhancing education and strengthening enforcement in order to eliminate the scourge entirely. He was at the time delivering the keynote address at the launch of the National Plan of Action for the Prevention and Response to Trafficking in Persons 2017-2018. The ceremony was held at the Guyana Police Force Officers’ Training Centre at Camp and Young Streets.

President Granger said that the Plan of Action, which was compiled by the Ministerial Task Force on Trafficking in Persons, is a tangible demonstration of the Government’s commitment to confront fearlessly and fully, this abhorrent criminal act, which is akin to slavery and is in fact often referred to as a form of modern-day slavery. He explained that while the laws of the country are unambiguous with regard to the protection citizens, they are effective only to the extent that people are educated to recognise and respect them and that they are properly enforced.
“Traffickers must be identified and prosecuted with the full force of the law… The fear of prosecution must serve as a deterrent against human trafficking. Guyana seeks to provide ‘good life’ for all of its citizens. The ‘good life’ includes protecting vulnerable citizens from the threats of servitude, sexual exploitation and forced labour. Victims of trafficking in persons need protection. They are often helpless. They are often afraid to speak out. They generally lack resources to seek assistance. Many of the victims being held against their will may be illegal immigrants and, therefore, afraid to go to the authorities for fear of being deported or prosecuted. Victims of trafficking in persons must be protected and provided with assistance for their recovery and reintegration into society,” President Granger said.

Speaking about the State’s responsibility in the protection of its citizens, the President reminded those gathered at the event of a motion that he had presented to the National Assembly when he was Opposition Leader, calling for the establishment of a Commission of Inquiry to investigate the crime of TIP. The motion was adopted but never assented to and by the then Head of State.

“The Government of Guyana, today, is solving the problem not suppressing bad news. We are successfully prosecuting traffickers, collaborating with counter-trafficking non-governmental organisations, international organisations and friendly countries, strengthening the inter-ministerial coordination of our efforts and financing a shelter and enhancing psycho-social services to victims,” the Head of State said.

Additionally, the Government will be deploying a corps of trained wardens to hinterland regions to patrol mining and logging settlements and border areas where trafficking is most prevalent.

Minister Ramjattan informed that the Ministry of Finance has allocated some $12M to aid in the fight against human trafficking. The Minister said that crime and corruption is not a culture, it is a choice that must be halted at all cost. “People must not be stuck in a cycle of negativity and lose hope. We have to dream that this job could be done, the job of halting trafficking, halting violence in all forms and crime in all its ugly forms,” he said.

He also spoke of the need for greater public support for law enforcement officers so as to develop a virtuous circle in so far as it relates to fighting criminal activities in all its forms.

Meanwhile, Minister Ally said that human trafficking is a callous industry that exploits and denies victims their basic human right. “Human trafficking crosses cultures and communities. It has no boundaries and so it is imperative for persons within our society to recognise that it is not someone else’s problem… Human trafficking impedes health, economic growth, the rule of law, women’s empowerment and lifetime prospects for youths,” she said.

The Minister said that together, the Government, non-governmental organisations and civil society bodies can give victims, particularly women and children, who have been violated, a much needed voice. She said that the new Action Plan provides a victim-centered and rights-based approach in assisting, protecting and reintegrating trafficking victims into society.

“The launching of this national Action Plan sends a clear message to all of our countrymen and women and that human trafficking is unacceptable. Perpetrators will be prosecuted and we will do whatever it takes to ensure that former victims are given sufficient support services,” the Minister said.

Ambassador Holloway said that US Government recognises Guyana’s efforts to combat this scourge and is proud of the country’s improved ranking in the 2016 State Department report which removed Guyana from the notorious watch list and placed it on ‘Tier 2’. “This improvement recognises the efforts of the Government, the TIP task force, the TIP Unit and the Judiciary in combatting this modern slavery… We are very impressed by the Government’s action plan, the implementation of which will serve as a guide to even further improvements in the anti-TIP effort. As always the Embassy stands prepared and even anxious to assist the Government in the core areas of TIP,” he said.

According to the Combating of Trafficking in Persons Act of 2005, the term human trafficking is defined as the recruitment, transportation, transfer, harbouring and/or receipt of persons by means of threat, force, coercion, abduction, fraud, deception, abuse of power or position of vulnerability or by giving or receiving payments or benefits to achieve the consent of a person having control over another or for the purpose of exploitation.

The Ministerial Task Force, which comprises several governmental and non-governmental organisations, was created to facilitate the planning implementation, monitoring and evaluation of national strategies in response to TIP.

Over the last three years, there has been an increase in the number of reported TIP cases and this is believed to be largely due to heightened awareness and education on the issue. In 2014, there were 40 identified victims, 59 in 2015 and 98 in 2016.