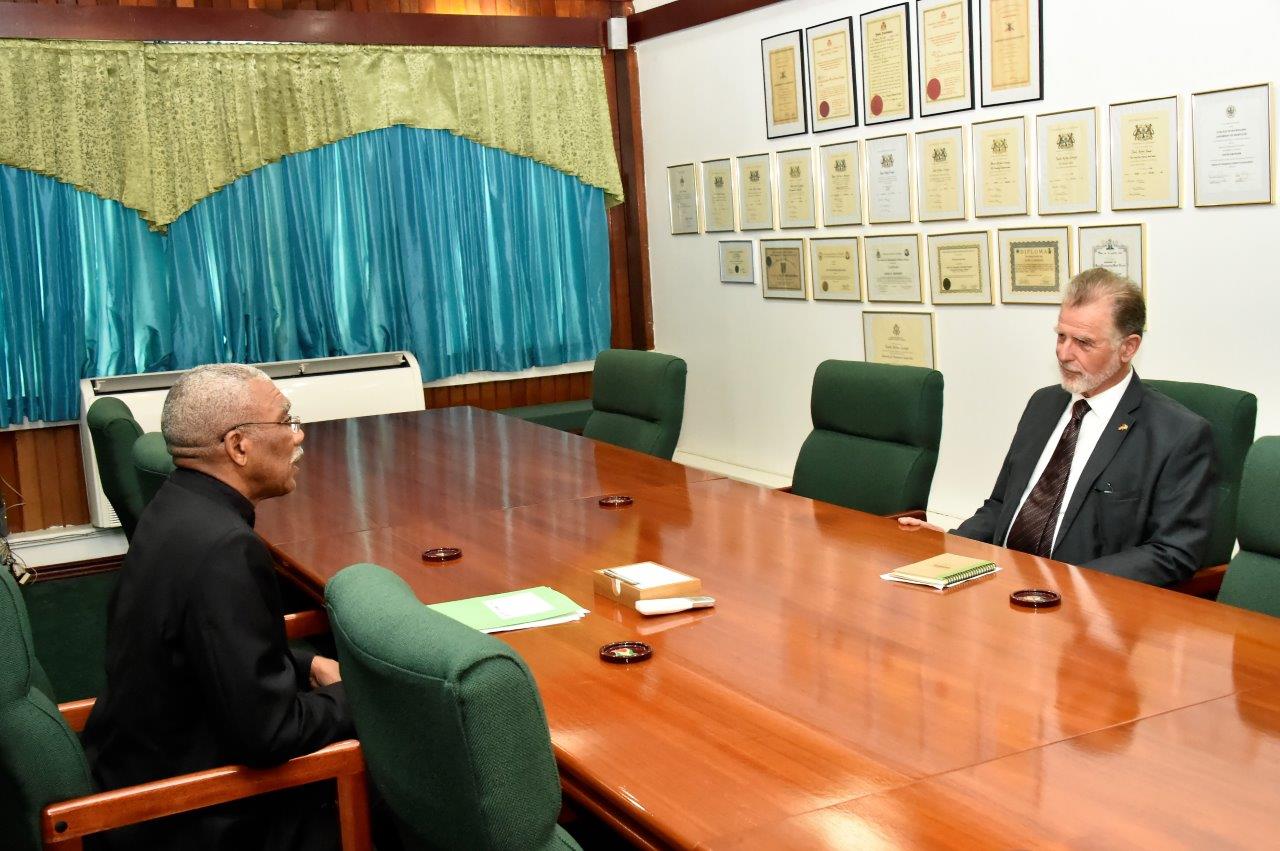 Georgetown, Guyana – (January 18, 2017) Germany’s Ambassador to Guyana, His Excellency Lutz Hermann Gorgens, today, said that Guyana is a standard bearer for the Caribbean community as the country continues to make headway in the pursuit of the development of a ‘green’ economy and the sustainable management of its resources in the fight against the climate change and global warming phenomena.

The Ambassador met with President David Granger at the State House, where discussions were held on a number of local and global issues including the mitigation of the climate change phenomenon, the advancement of the United Nations Framework Convention on Climate Change (UNFCCC) Paris Agreement, the achievement of the Sustainable Development Goals (SDGs), Guyana’s transition to a ‘green economy’, the upcoming CARICOM Heads of Government Inter-Sessional Meeting and the emerging oil and gas sector.

Mr. Gorgens, in an invited comment, after the meeting with President Granger, said that he is pleased to see the country embarking on a path of ‘green’ growth and development, even as the world is scrambling to combat the effects of climate change. “We discussed both bilateral and global affairs and the bilateral focus was on Germany’s contribution in helping Guyana to achieve the vision of a greener economy and a clean environment. Guyana’s present policy is standard bearer for the whole Caribbean region,” he said.

The Ambassador noted that the improvements he has witnessed with regard to the beautification of the city and better solid waste management is a sign the Government is taking its ‘green’ state policy seriously. “I am very pleased. I commended President Granger and the City of Georgetown on the extraordinary cleanliness, which the City has achieved. I told the President that I find the City much cleaner than the last time. No plastic bottles in the canals. That might not be the first priority for someone who struggles for his or her own income level but I think that it is important for the general quality of life,” the German Ambassador said.

The Ambassador noted that his country will continue to cooperate strongly with CARICOM and all of its member states to achieve the goal of energy efficiency, renewable energy, protection of natural resources, biodiversity, climate mitigation, achieving the SDGs and all other related areas. “We strongly believe that the President and my Government agree on that; that only through multilateral corporations through strong partnerships, we can master the global challenges,” he said.

Guyana and the Federal Republic of Germany established formal diplomatic relations in September 1966, shortly after Guyana gained its Independence in May of that year. Since then, the two nations have collaborated in a number of areas, particularly as it relates to forest preservation and climate change within the framework of the Caribbean Renewable Energy Development Programme, which was implemented in 2004.