Every child, despite challenges can be empowered to achieve -President Granger pledges support to Ptolemy Reid Rehabilitation Centre 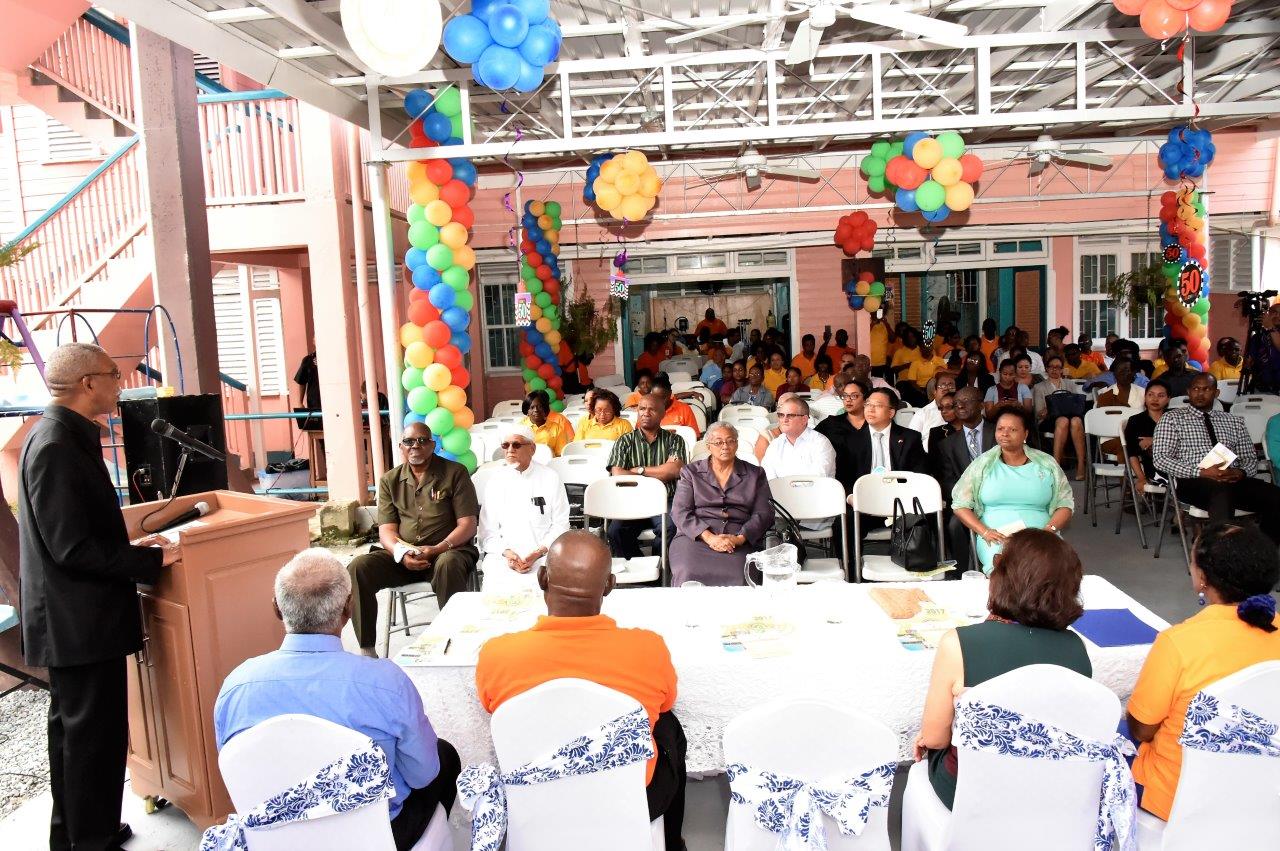 Georgetown, Guyana – (January 19, 2017) President David Granger, today, pledged more of Government’s support towards the work of the Ptolemy Reid Rehabilitation Centre, as he noted that every child, despite challenges, physical or otherwise, can become masters in their field of choice, once they are empowered and given the opportunity to do so.

The President, who was at the time delivering the feature address at an observance to mark the Centre’s fiftieth anniversary, said that every child has the ability to contribute to the nation’s development once the barriers to their successes are removed and the opportunities necessary for their development are offered and supported.

The President noted that the State has responsibility to its citizens and as such, his Government will not shirk its duty but will ensure that the necessary systems are in place to support and sustain opportunities, which will ensure that every Guyanese child has the opportunity to pursue his or her development.

“My visit here are all about opportunities…The State cannot close its eyes to its responsibility. In terms of education, we would continue to support this Centre to enable children with challenges to equip themselves with the quality of education that will take them to the level of employment. We will have centres where they can use their brains, have tools and help them to produce and be prosperous. We will also go a step further to ensure that those children are empowered fully. We have to empower them to raise their voices to demand that there are changes to our infrastructure to our ministries and schools, public institutions so that they can be accommodated. There will be more state funds coming to support this institution,” the President committed.

The Head of State noted that growing up in an era before independence where equality was absent for Guyanese people, it is his wish as the leader of the country, to ensure that the citizens, particularly the children and youth have a better society in which they can thrive and grow. “Independence promised us a good life. We all felt then that everything that we wanted or needed would come to us with Independence. We thought that we would have, for the first time, equality of opportunity because the British Guyana that we grew up in was not an equal place and many persons, even though they did well, couldn’t get jobs in some places in this country…and that has been the constant theme in our political and social life for the last 50 years. The fact that we had to create the first secondary school in the hinterland in St. Ignatius, that only two weeks ago we could have the first female [Senior] Counsel in the history of Guyana. It means that we have to constantly remind ourselves that we are a very unequal society and we have to take an extra step to bring about equality,” President Granger said. 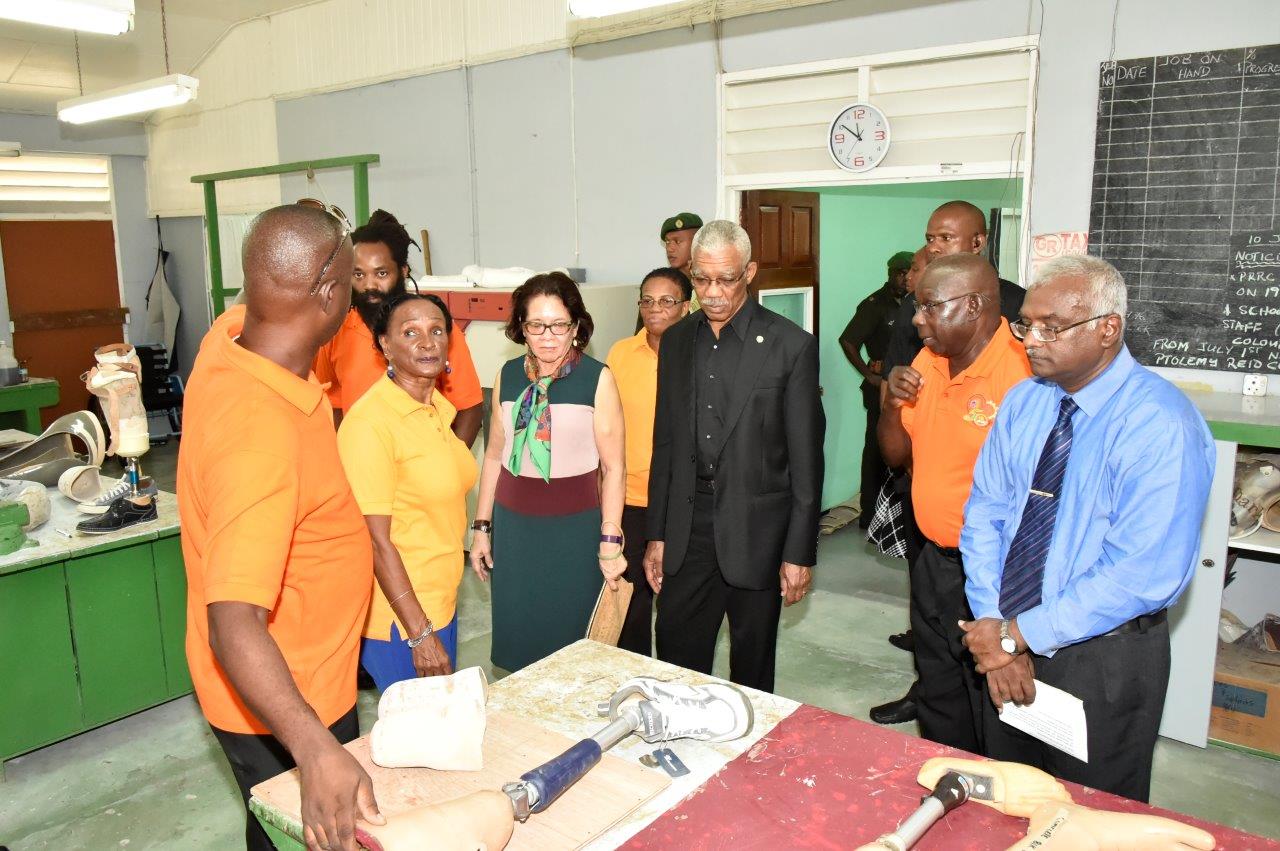 President David Granger and Mrs. Sandra Granger examining some of the work done in the Orthotic and Prosthetic workshop of the Centre

Further, the President praised the Centre for the work, which it has been doing for the last 50 years, as he noted that it has provided hundreds of persons with a new reason for living and given them a new lease on life.

Meanwhile, Lieutenant Colonel Randy Storm, Chairman of the Board of Directors, delivering brief remarks, said that it is important that the children of the Centre and all others across the country be given the necessary opportunities to become the best that they can be. He noted that their challenges do not disqualify them from learning or reaching for greatness.

“We have a vision of ramps and lifts in all public and private buildings. Treat us right and we will achieve. Treat us right and we will succeed. Give us the same opportunities as the others. This is the only organisation, which makes prosthetic limbs. We need students, who are qualified to attend the University of Guyana and all other training institutions and when they get there, they must be able to access their classrooms. The graduates of this organisation must be able to return to their villages and towns and meaningfully contribute to the development of the state. They must be trained to start their own businesses. They must have a sense of pride and self-worth. They must be able to gain suitable employment and as far as practicable, they should live normal life. Please embrace us,” the Chairman said to applause.

Ms. Hyacinth Massay, Rehabilitation Officer of the Centre, detailing the history of the organisation said that the Centre and its caretakers have indeed come a long way, providing much needed services to the Guyanese public. As it is, she noted, the Ptolemy Reid Rehabilitation Centre provides rehabilitation services for over 100 children and 30 adults annually while its day care service provides care for up to 35 children and nine residents. Another component of the facility, the Harold B. Davis School has 45 students enrolled.

The Centre was originally established in January 1967, by the Ministry of Health to provide rehabilitative services for those children who had suffered residual paralysis following the 1960 and 1964 poliomyelitis epidemics. The institution has since then has developed a comprehensive programme for rehabilitation for children with various types of physical and other developmental disabilities. It currently offers services such as physiotherapy, special education, speech therapy, occupational therapy, counselling and educational services for parents of children in rehabilitation programmes and provisions for orthotic and prosthetic appliances for the physically disabled in Guyana.

Message of Condolence from His Excellency Brigadier David Granger, President of the Cooperative Republic of Guyana, on the passing of Mrs. Hyacinth Manickchand, Mother of Member of Parliament, Hon. Priya Manickchand