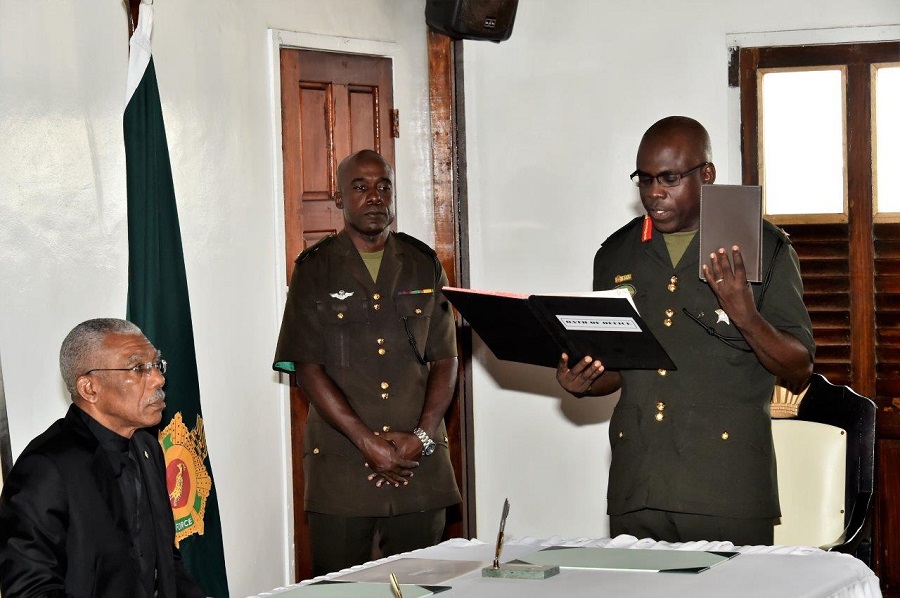 Georgetown, Guyana – (January 10, 2017) President David Granger, this morning, promoted Colonel Patrick West to the rank of Brigadier, before swearing him in as the new Chief of Staff (CoS) of the Guyana Defence Force (GDF). The new Chief of Staff was also conferred with the National Award, the Military Service Star (MSS) in recognition of his 33 years of dedicated service to the Force. Brigadier West takes over command of the Force from Brigadier George Lewis, who was sworn-in on October 3, 2016.

Speaking at a brief ceremony at Base Camp Ayanganna, President Granger said that while Brigadier Lewis have had shortest tenure as Chief of Staff, the appointment of Brigadier West is symbolic of due process and it represents the decision of the Guyana Defence Board to ensure that officers retire when they are due to do so. Additionally, this move is in keeping with the GDF’s succession policy, which ensures that officers are promoted on the basis of seniority and performance.

“We were pleased to follow the correct procedure. This is in keeping with the commitment of the Defence Board to ensure that there is no future disruption to the professional development of members of the GDF so that they could look forward to a comfortable and safe tenure of office, without fear of recrimination or retribution,” the Commander-in-Chief said.

He noted that the GDF, a 52-year old institution, has been faced with numerous challenges over the years. However, its management must ensure that its challenges, both internal and otherwise, do not affect the quality of the work of the officers. The President also reminded officers of the Force of their social responsibility and their oath to serve all Guyanese regardless of their ethnicity, religion and geographic location and underscored the importance of professionalism, education and training.

“The social responsibility of the GDF is embedded in the Defence Act. It is embedded in the functions performed by the GDF and it is embedded in the culture of officers and members of the GDF… The Defence Board would never advance to the rank of Chief of Staff, somebody who is completely untrained. Today we witness the advancement of an officer with 33 years of service. He has completed all his military courses at home and aboard and his military education is comparable to anything we have seen in the past. The first pillar of his professionalism is his professional education and there is no way anyone could criticise the professional education of Brigadier West,” President Granger said.

Meanwhile, the new Chief of Staff said that being elevated to the helm of the Force was not something he had initially envisioned until a few years ago when he realised that there was a possibility. “I realised that I needed to broaden my horizons. So as the Commander-in-Chief said, I completed all my required professional military education and my academic education as well, so that I can provide the relevant balance and directions, strategic and otherwise, to the Force.”

Brigadier West pledged to be a just Chief of Staff, whose watch word is professionalism. He also committed to ensuring that the GDF is transformed in the interest of total national defence.

The new Chief of Staff enlisted in the GDF on September 1, 1984 and was commissioned on August 28, 1985, following which he was posted to the Artillery Battalion. During his 33 years of service, he held several appointments in the Force; from Platoon Commander to Commanding Officer in both the Artillery and Infantry Units.

He also attended training courses at foreign military institutions such as the Escola de Aperfecion de Officias in Brazil, Intermediate Level Education at the Command and General Staff College at Fort Leavenworth, Kansas; the National Defence University in the Peoples Republic of China and completed several Peacekeeping modules in Latin America.