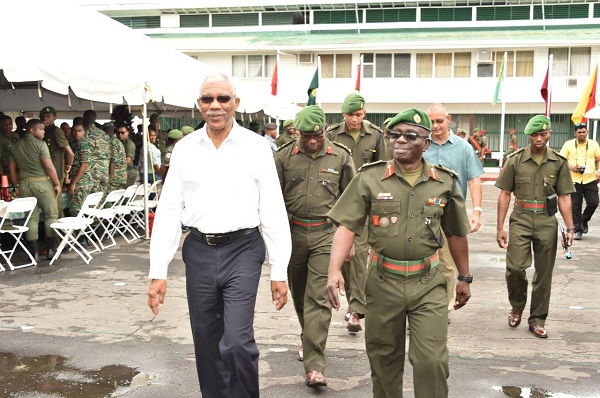 Georgetown, Guyana – (December 21, 2016) President David Granger, today, said that Guyana welcomes the decision by United Nations’ (UN) Secretary-General, Mr. Ban Ki-moon to identify a definitive deadline to the Good Offices process for the resolution of the Guyana/ Venezuela border controversy. Declaring that Guyana has worked hard to bring an end to the claim on its sovereign territory, the President said that the country is ready to prove its case in the International Court of Justice at the end of 2017, should the Good Offices process maintain the current stalemate.

The President, who was at the time addressing officers and ranks of the Guyana Defence Force (GDF) at the Base Camp Ayanganna’s Annual Christmas Lunch, said that Guyana has already waited too long for a resolution to this matter.

“Last Friday, for the first time in 51 years, the Secretary-General has decided that that 51-year-old claim by Venezuela will go to the world court at the end of 2017 if the two countries Guyana and Venezuela do not agree to make some other arrangements. Well we have already decided that we have already waited 51 years too long. It is our territory and we will go to court to prove that it is our territory and you are there to back me up aren’t you?” the President said to loud cheers and shouts of “yes” from the members of the Force.

President David Granger and Chief of Staff of the Guyana Defence Force, making their way onto the Drill Square, Base Camp Ayanganna, where the luncheon was held.

Commander in Chief of the Armed Forces, President David Granger serves lunch to some of the ranks, who are stationed at the Base Camp Ayanganna.

The President noted that the country has put in significant effort and work to place the border controversy at the top of the international agenda, lobbying the UN Secretary General and gaining support from the Caribbean Community (CARICOM), the Commonwealth Nations and other nation states. He added that it is satisfying that the work of the administration has not been in vain.

“We worked hard for it. We engaged the Secretary General since last year and it was always our intention that it is the Secretary-General’s responsibility to make a decision about the way the controversy would be dealt with and he has made that decision and so in that regard, I am satisfied that the Secretary-General has discharged his responsibility to the Geneva Agreement of 1966. So we are very grateful he has made that decision. We have waited 50 years and we understand that the Secretary General has been very deliberate and very cautious in approaching this matter. International issues cannot be resolved in a sudden or spontaneous fashion and we understand that under the circumstances the Secretary-General did what was his duty under the Geneva Agreement,” the Commander in Chief of the Armed Forces said. 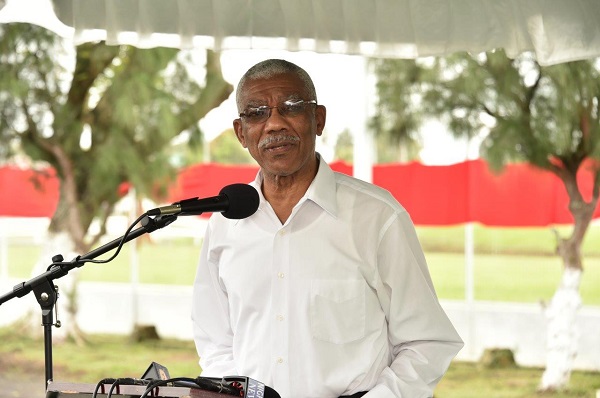 The President expressed gratitude to the servicemen for their commitment and dedication, during the past year, noting that Guyana would not have been where it is had it not been for the Force. He said that it is not just the Defence Board and the Government that is grateful to the GDF’s service but the nation as a whole. The President also expressed the Prime Minister of Barbados, the Right Honourable Freundel Stuart’s gratitude to the Force for their support and display of skills at the Barbadian 50th Independence Anniversary celebrations, which were held last month.

Meanwhile, Chief of Staff of the GDF, Brigadier George Lewis said that the Force has enjoyed an “excellent” year, in which its successes were more than its challenges and, therefore, looks forward to an even better year in 2017.

This lunch marked the last in a series of lunches, referred to as ‘Soldiers’ Day, held by the GDF in recognition and celebration of its ranks, during the Christmas season. There have been Soldiers’ Day activities at Lethem, Kaikan, Eteringbang, Mabaruma, the GDF Floating Base, New Amsterdam, Camp Stephenson, Camp Seweyo and Camp Jaguar. 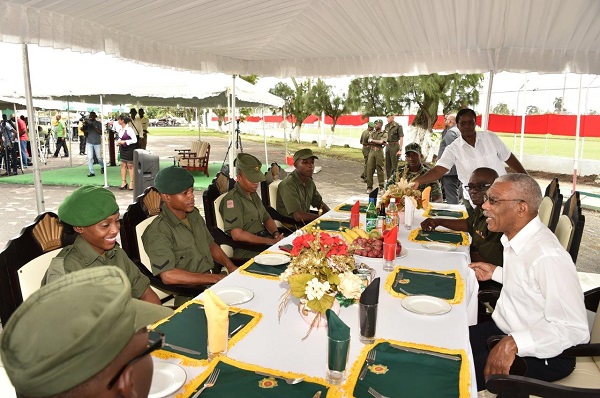 President Granger shares a light moment with some of the Officers of the GDF as Chief of Staff, Brigadier George Lewis looks on.

Remarks by His Excellency Brigadier David Granger at the Opening Ceremony of the 14th Caribbean Cuboree in Guyana held at the Durban Park, 24th July, 2016

Remarks by His Excellency Brigadier David Granger at the launch of Agriculture Month- National Tree Day held at the Iwokrama Centre for Rainforest Conservation and Development 1st October, 2016