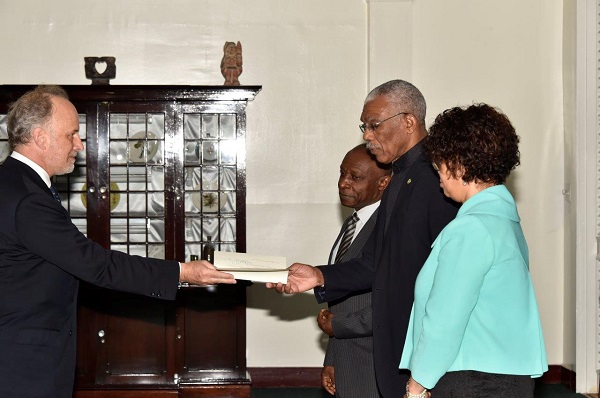 The President told the new Ambassador that his decision to be resident in Georgetown will allow for him to be better acquainted with Guyanese, their culture and the challenges they face and said that Guyana is keen to cooperate with countries that share its values and commitment to address common threats to humanity. “Guyana remains wedded to the ideal of friendly, respectful and mutual cooperation among states. We subscribe to the respect for the sovereignty and territorial integrity, non-interference in the internal affairs of other nations, the peaceful settlement of international disputes and the right to every sovereign state to pursue its development free from aggression and threats of aggression,” President Granger said.

He said that one such threat is global warming, which has the potential to trigger catastrophic humanitarian and environmental crises. “Guyana looks forward to finding pathways of humanitarian cooperation with the Sovereign Military Order of Malta as we pursue our green development agenda,” he said.

Ambassador de Rosière, in his remarks, said, “My hope is that as I reside in Guyana and I come to know your country and its people that I can become an advocate for Guyana.”

The Sovereign Military Order of Malta is a lay religious order of the Catholic Church since 1113. To date, the Order has diplomatic relations with over 100 countries and 54 associations around the world. It is headed by Grand Master Fra’ Robert Matthew Festing.

He informed that the Order is active through its emergency response arm and is committed to upholding faith and helping the poor and the sickly.