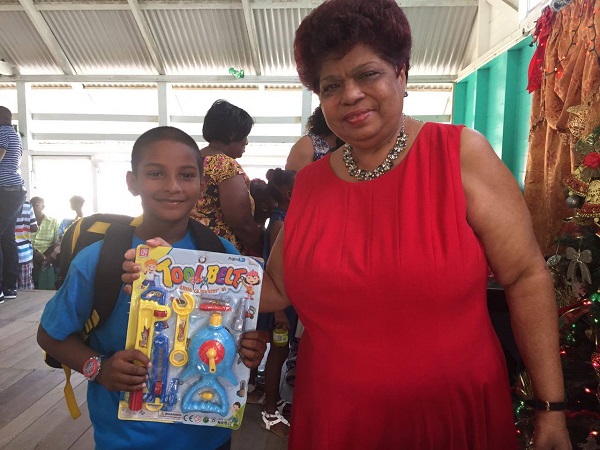 Georgetown, Guyana – (December 11, 2016) Minister of Social Cohesion, Ms. Amna Ally, today, said that children are at the heart of the Government’s development programme and it is putting measures in place to ensure that they have access to a good education so that they can become productive adults. The Minister was at the time speaking at a Christmas party hosted at the Manchester Secondary School, Manchester Village, Corentyne Berbice. Three hundred children from areas including New Amsterdam and Corriverton received toys and goodies at the party.

“Our Government has your interests at heart. We love you and we want to see you grow up to be good citizens of Guyana. We want you to enjoy the good life that our Government is offering and that you have begun to start enjoying that,” Minister Ally said.

This lad was pleased to receive his gift from Minister of Social Cohesion, Ms. Amna Ally

The Minister also said that the Government has other good things in store for children. “The Coalition Government …wants to see our children well educated and that is why in this region alone we have put three buses to make sure that you get to school on time and every day… I also know that you have a boat in the Canje River and we have also distributed a lot of bicycles,” she said.

Before the close of the party, Minister Ally presented a brush cutter to Pandit Suresh Sugrim of the Berbice Central Arya Samaj in Port Mourant, Corentyne. This is the third of 50 machines that the Ministry has distributed. The first two were presented to the Mocha Arcadia Methodist Church and the Anna Regina Multilateral School, respectively. Plans are in train to present a pair of the machines to established units in all Ten Administrative Regions. 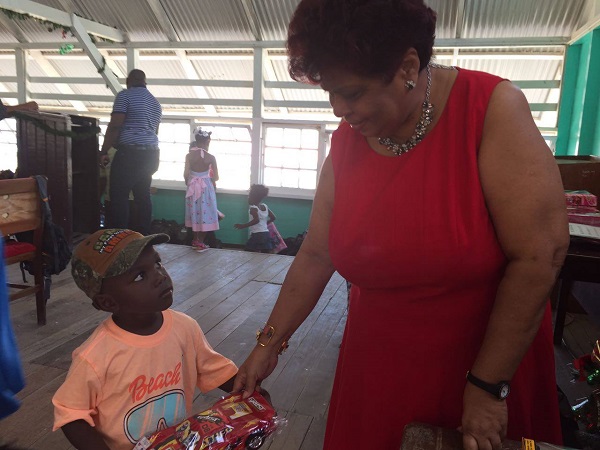 This little boy seemed captivated by Minister of Social Cohesion, Ms. Amna Ally after she gave him this present.